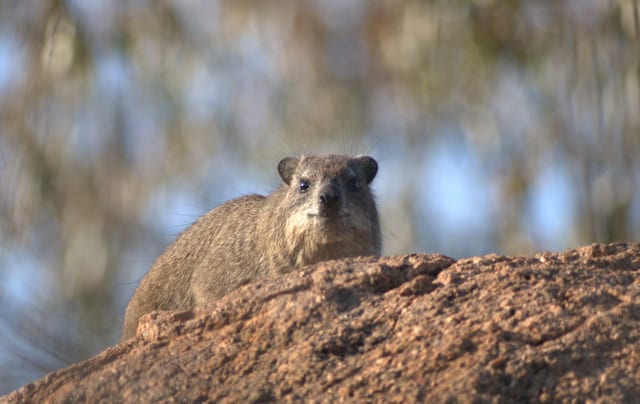 Just when I thought that I was alone with my thoughts as I wandered around Mabula Game Lodge looking for content for their social media platforms, I noticed THIS Dassie keeping an eye on me from its lofty vantage point on top of a small koppie of rocks in the middle of the camp. Although most commonly referred to as Dassies (Afrikaans) their English name is the Rock Hyrax. 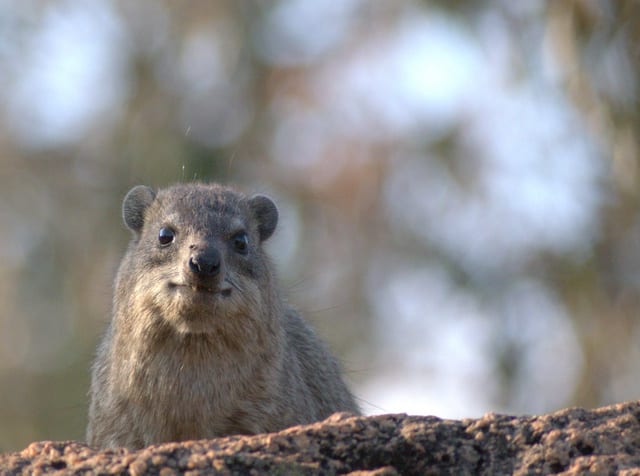 Looking like a cross between a rabbit and a guinea pig, they can weigh in at almost 6kg and around 55cm in length. Quite a size and weigh should this rodent decide to jump on me as I walked by. However, to the best of my research, I could find no incidents of them ever attacking humans. 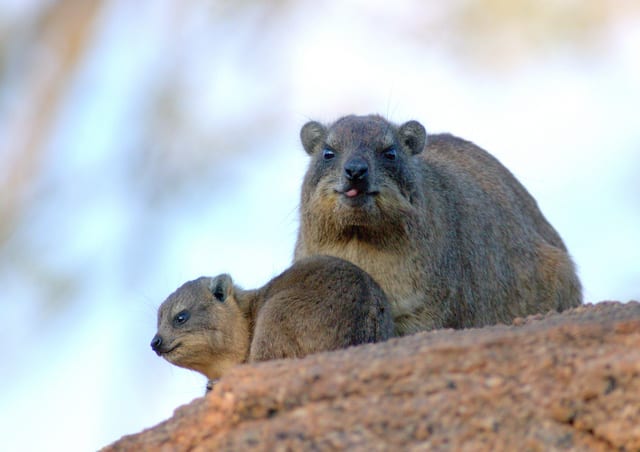 She seems to be pulling her tongue at me, knowing that there is no way that I would be able to reach her and her youngster. This animal becomes sexually active at about 17 months. Interestingly, the territorial male, sees his testes increase 20 times in weight. That, as they say, take a LOT of balls. 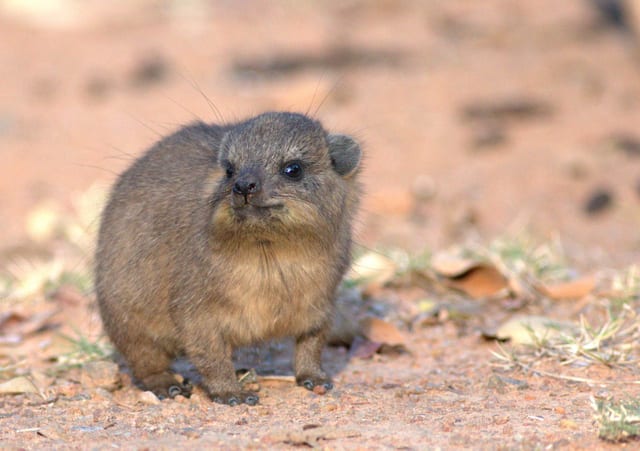 Dassies can be found through most of southeast Africa and the Middle East on rocky outcrops and cliffs. They can be found from sea level to 4000m and they favour rocky crevices to seek shelter from the cold. 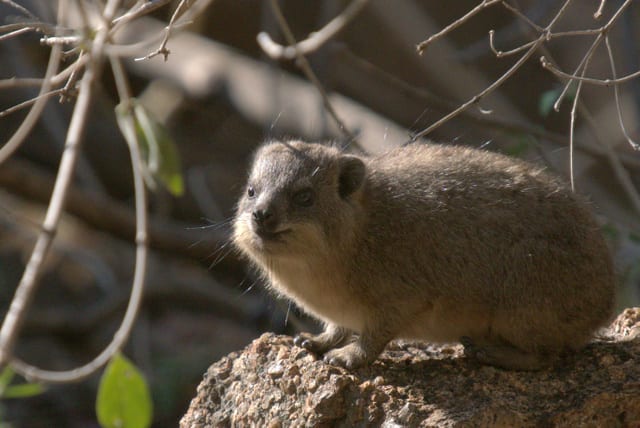 Dassies are not on any red-alert list and their populations are usually kept in check by a variety of predators, both on land and from the air. Humans catch them for their skin and meat and their urine is used in traditional medicine to treat ailments such as epilepsy, convulsions and hysteria. 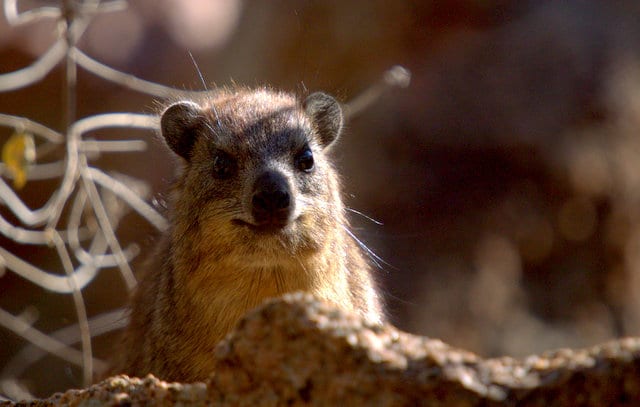 The dassie’s upper incisors grow continuously.  Since they don’t stop growing, this means those teeth will probably end up looking like tiny tusks. A a result of this and their feet structure, their closest living relative is the African Elephant! 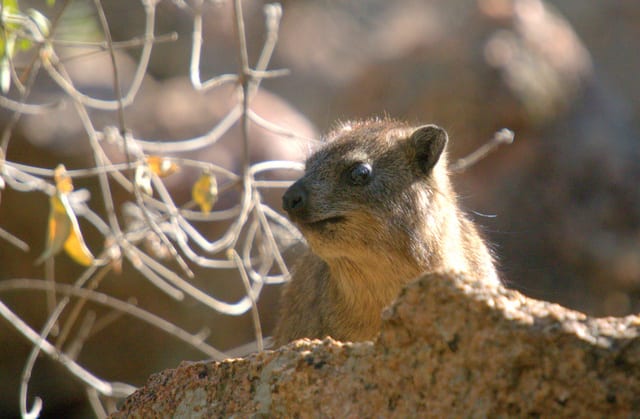 Their iris’s have a unique feature that allows them to cut out light coming from directly above, thus helping them to detect birds of prey that attack from out of the sun. 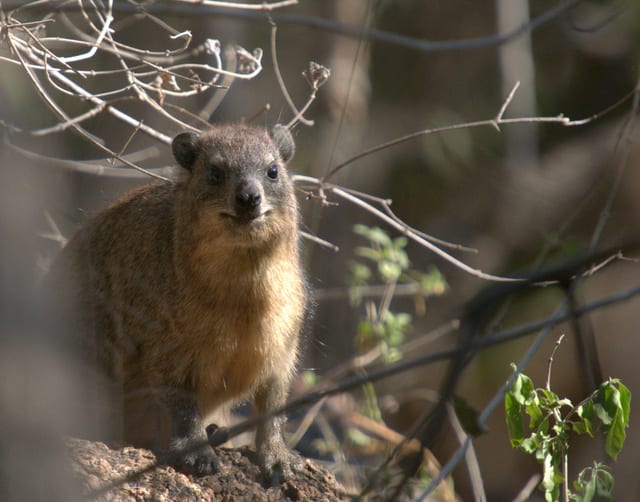 These are sociable creatures as can be deduced from the numbers running around the ground of the lodge, calling to each other in tiny chirping sounds. 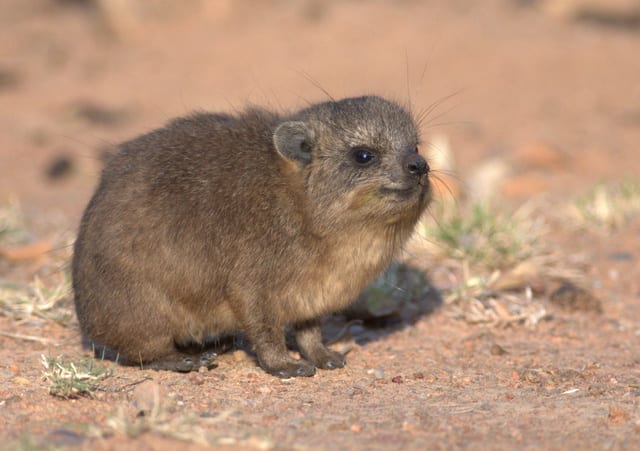 A whole lot of cute. And, although they are NOT tame, if you sit quietly near them they will stare at you with keen interest. In cold weather, they tend to sleep on top of each other, a practice known as heaping.

Mabula Game Lodge is currently undergoing renovations in preparation for their reopening to the public once the lockdown limitations have been lifted. 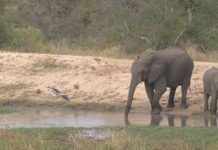