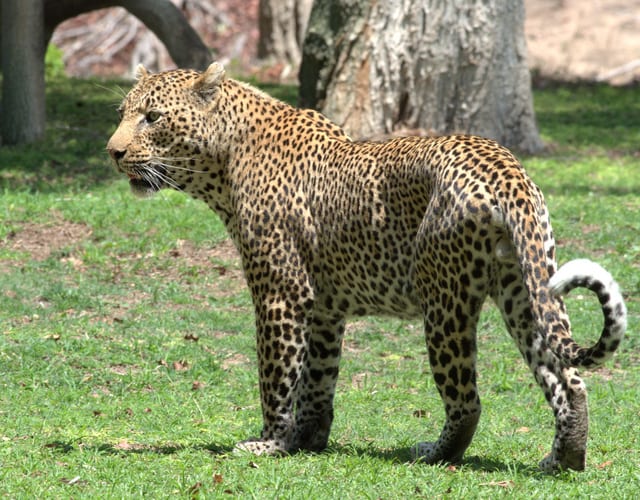 As a guest at a lodge, the last thing that you expect is that the wildlife will come to you. Occasionally that happens and usually, it is one of the antelope species that use the lodge grounds as their habitat, knowing that being inside the fence is safer than being outside in the wild.

This incident occurred when my wife and I were in a camp in the Sabi Sands, an area well known for its thriving leopard population. We had been out for our morning drive with no predator sightings and had completed breakfast while discussing how good it would have been to have found one of the cats during the drive. Food done, we went into the lounge to have coffee and relax while we waited for lunch. (As an aside, trips to game lodges invariably revolve around sleep, food, and game drives) I decided to use the time to catch up on some work and my wife plopped into an armchair with a book. Silence enveloped us both and peace reigned in the lodge. Suddenly my wife exclaimed, “There is a leopard in the outside bar”! My initial reaction was to say “Nonsense” and the word was forming on my lips as I looked up from my keyboard, only to be greeted by the sight of a LARGE male leopard padding quietly through the bar near the outdoor dining room where we had enjoyed breakfast not too long ago. My wife’s shout had alerted management who came running, only to explain that the leopard was a regular visitor and that if we liked we could go outside and track it as it wandered through the grounds. 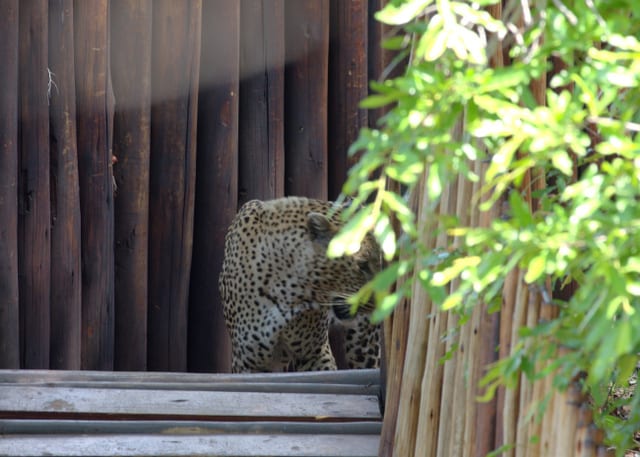 Camera in hand, I was the first out the door and we followed it as it zigzagged past the swimming pool, down the alley to the hide and then over the top of the structure and off to a nearby waterhole. This is where we broke off the contact as we could not see where it had gone and did not want to chance walking into it in an enclosed space. 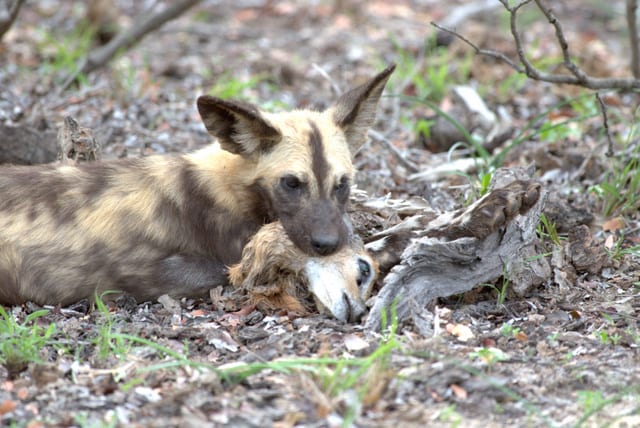 Cut to the following morning when we go out on game drive and find a pack of wild dogs playing with the leftovers of a small steenbok. Bringing new meaning to “Don’t play with your food”. Pups will often use the remains of a kill as a chew toy until it finally loses its appeal or its value as a teaching aid. And although it might look gruesome, it is educational for the pups. 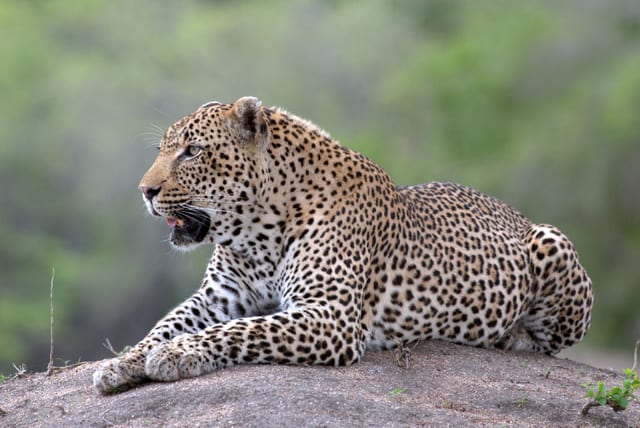 Returning to the lodge out guide suggested that we take a turn past the waterhole where we had last seen the leopard the day before. It turned out that he had made a kill and we found him relaxing on a raised bank, literally a few meters from where we had lost sight of him on the previous morning. 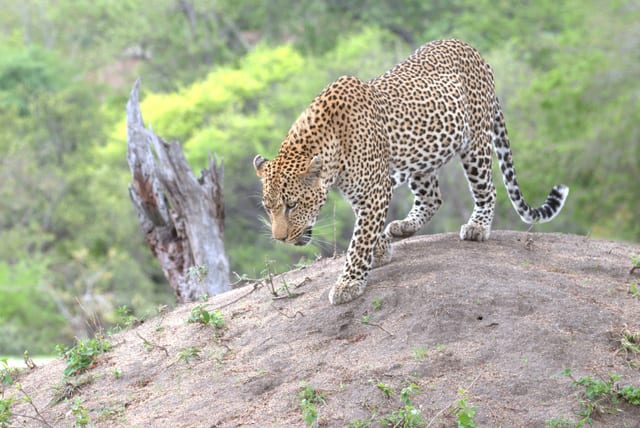 One of my favourite leopard shots. Once we arrived he decided that it was breakfast time and he took off, heading towards the remains of a wildebeest that he had killed. 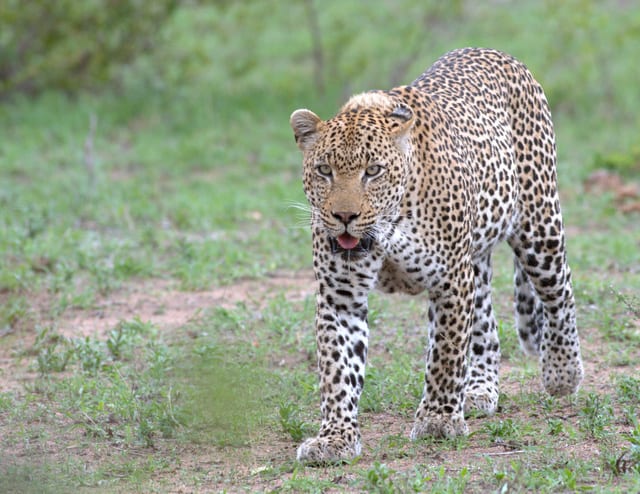 Drooling in anticipation! He strode purposefully towards where we were parked, halfway between the rock and the kill. 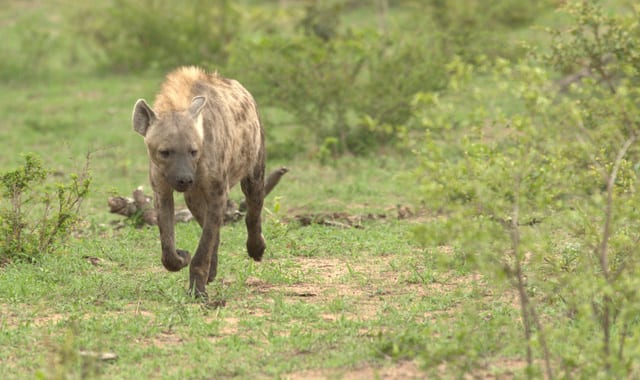 What he had failed to notice was this hyena that was following in him! Not too far behind, yet it had not been detected by the leopard who was laser focussed on the food in the tree ahead. 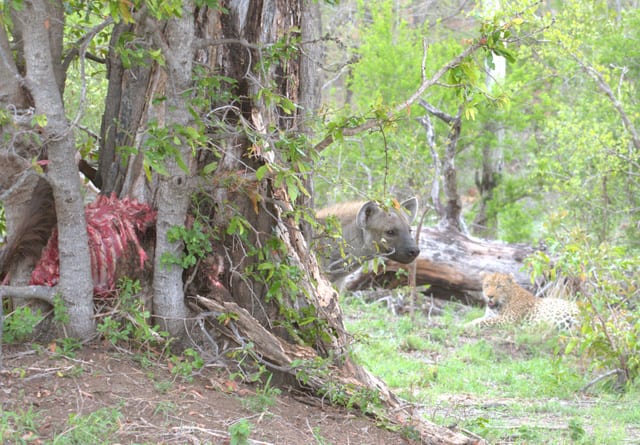 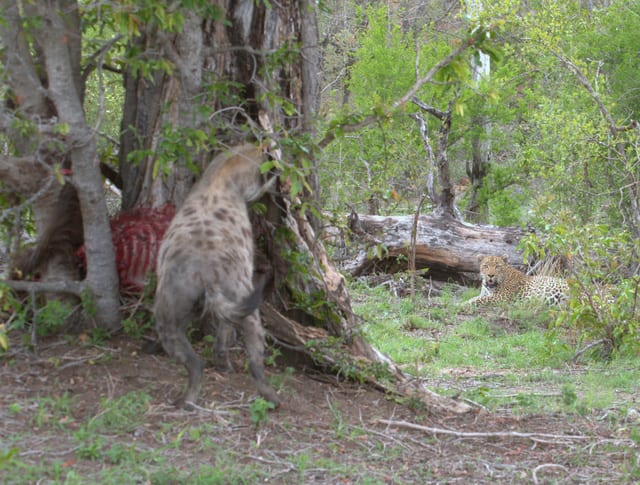 The leopard has been very lazy when placing the wildebeest remains in the tree and had not taken it out of reach of the hyena. But it was very firmly wedged, which meant that the hyena could not remove the entire carcass. 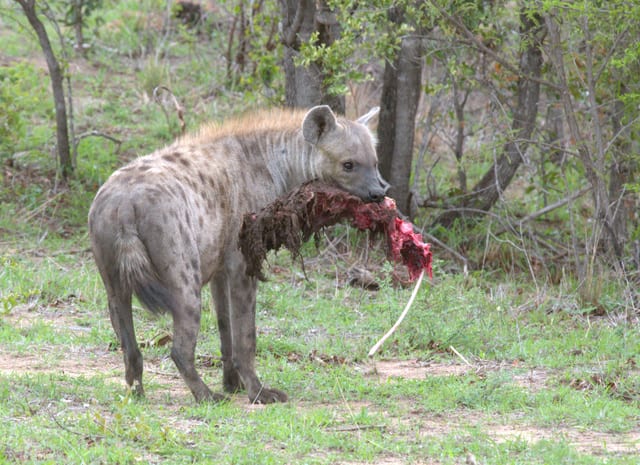 Eventually, it was able to get part of the spine which seemed to satisfy both hunger and the fact that it had been able to steal while being observed by the owner of the kill. 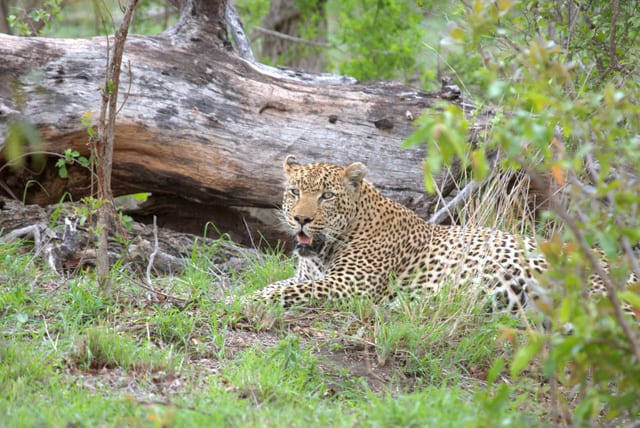 The leopard did not intervene during the entire time that the hyena was present. He lay quietly next to the log, knowing that the small portion that was going to be lost was a safer option than tackling the hyena and possibly getting injured. 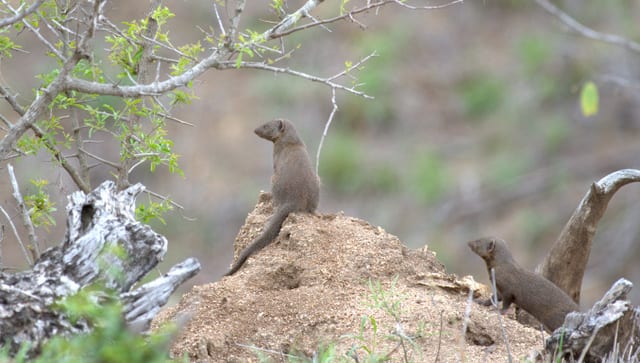 And all the while a small group of Dwarf Mongoose looked on. Making certain that they were out of harm’s way, they had the best seats in the house to witness the interaction. For them, it was just another day in paradise.