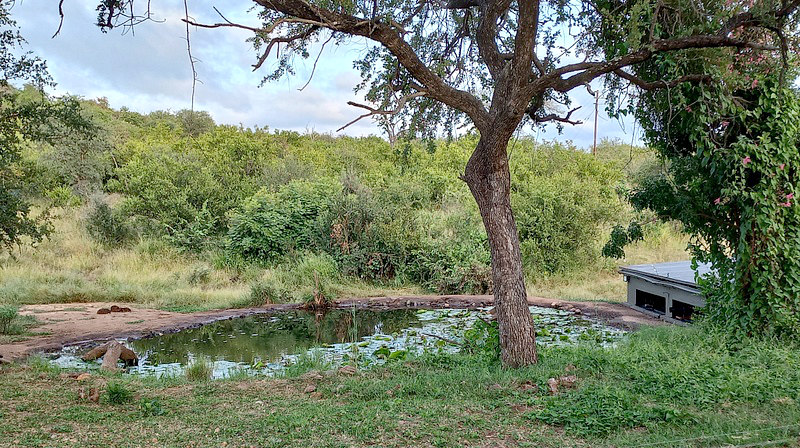 Hidden in plain sight, The Umgede Hide at Antares Bush Camp & Safaris, which is where owner Ian Owtram and I spent most of our time on my recent visit there.

I have a fascination with sub-terranean hides and this is one of the most comfortable and well-equipped ones I have been in.

At the beginning of 2019, I had been commissioned to write an article on hides for a  national magazine. The trip that would include some of the hides was scheduled for June and then not one but two things changed. First, the magazine was closed down by the parent company and then COVID struck and my article was placed on a back burner…or perhaps even removed from the cooker altogether.

The time that I spent in this hide has rekindled my passion to resurrect that article, and I hope that Umgede will form the cornerstone of the new one… 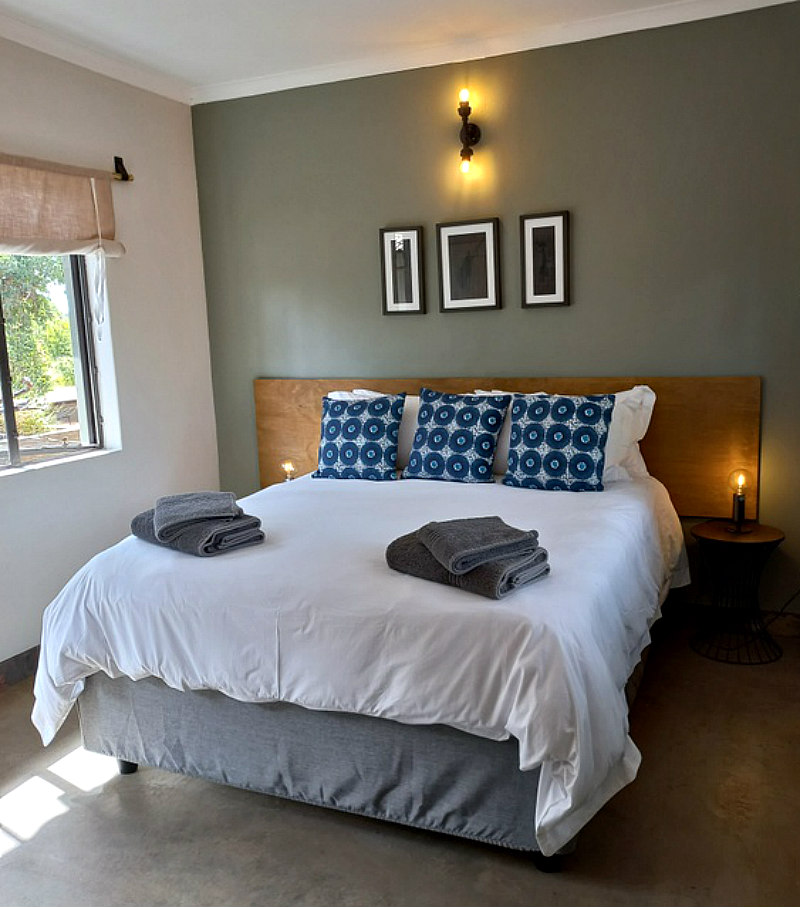 Although I had awesome accommodation at Antares, I literally only spent time here to use the ablutions (there are non at the hide) and to catch some sleep in the early hours of the morning. I could have slept in the hide as there is a daybed with blankets and pillows, but I would have slept through any late-night visitors, hence me returning here to nap and refresh. 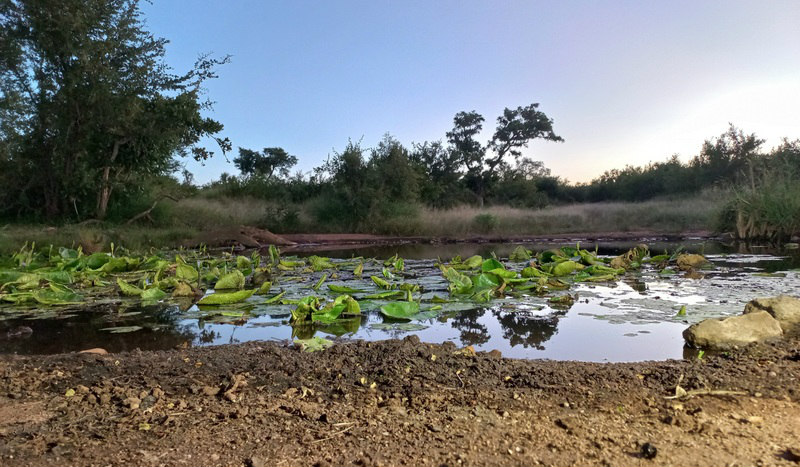 The waterhole is well lit and the layout of the surrounding area has been well planned to give photographers the best possible images.

The water contains terrapins and tilapia, the latter forms part of the diet of many of the birds in the area. The one that caused me the most anguish was a Woodlands Kingfisher that was impossible for me to photograph when he was catching food as he had no ‘spot’ that I could focus on. 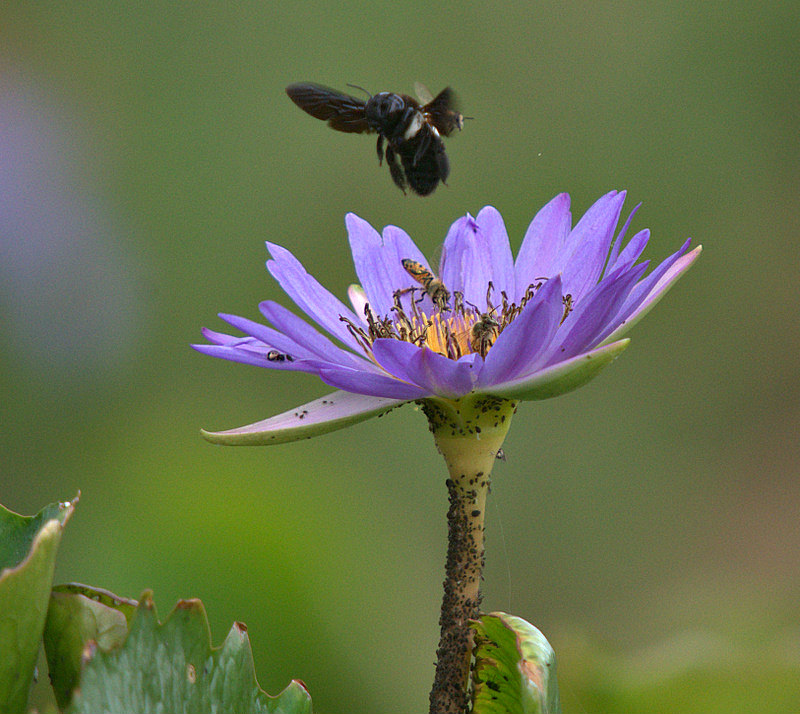 Waiting for action I discovered that the flowers were filled with bees and other insect life, and seeing that they have wings, I felt that it was relevant to feature them in this post. 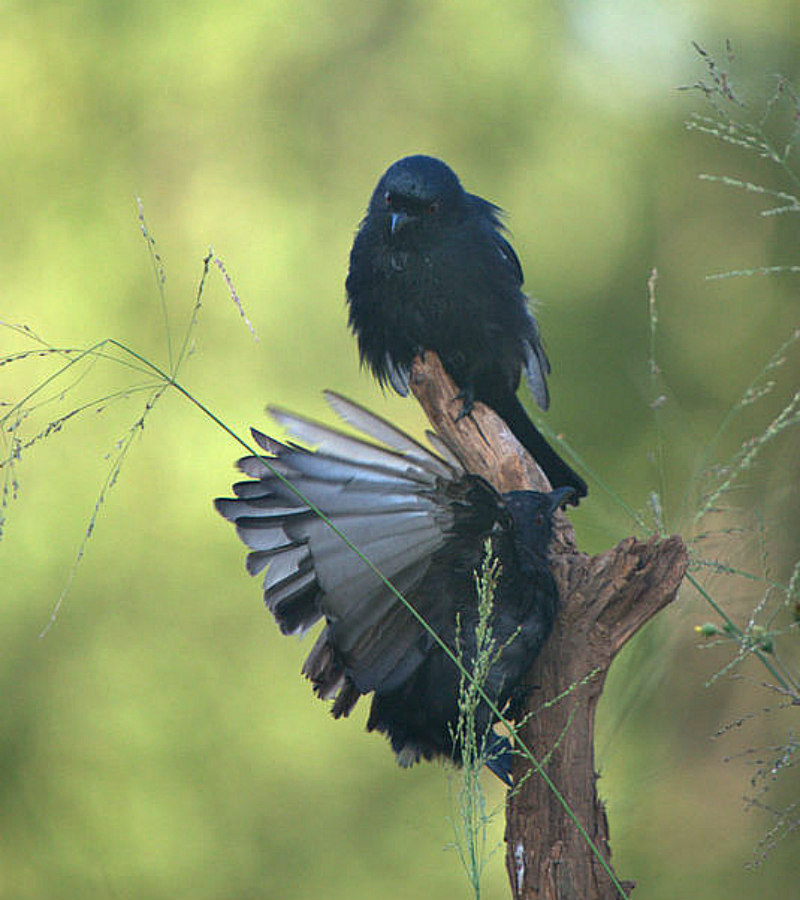 Scruffy looking Forked-tailed Drongos. Their plumage was not in the best of condition, but they were active and captured my attention.

I have to nail my colours to the mast here and say that I have the utmost respect for serious bird photographers for two reasons. They have immense patience and will sit in a hide for hours in order to capture an image of a particular species. And I have lens envy as many of them are equipped with lenses that I cannot afford and can only dream about, like an 800-1200mm lens of which, to the best of my knowledge, there are only 2 in South Africa and cost in excess of R200000.00

To give you some idea of what sort of dedication it takes to get the perfect shot, Scottish photographer Alan MacFayden, took 4,200 hours and 720,000 images to capture a perfect shot of a Kingfisher diving straight into the water without making a single splash. Now THAT is dedication, but his obsession cost him 5 engagements and two marriages!

Personally, I have neither the dedication and I love my wife. 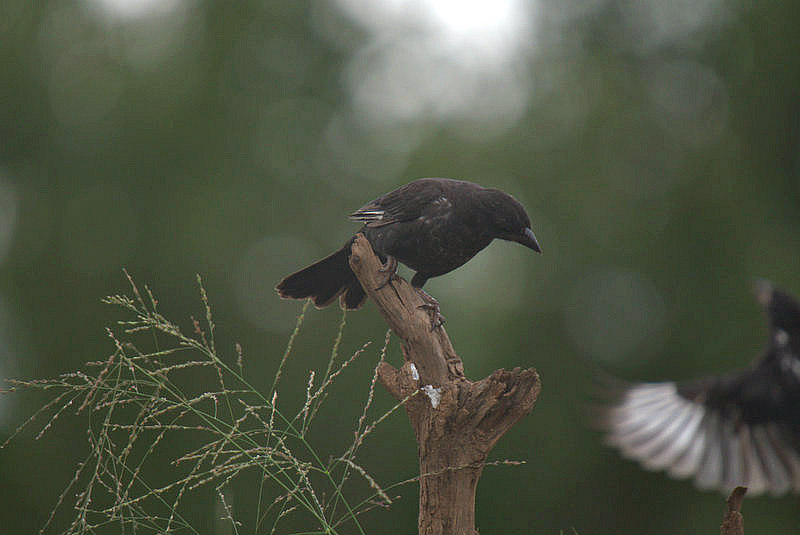 Coming into land or taking off? Is it the perfect flight image of a Buffalo Weaver? Certainly not but the white wing feathers do add to the overall effect of the image (for me anyway and in this post, mine is the only opinion that counts) 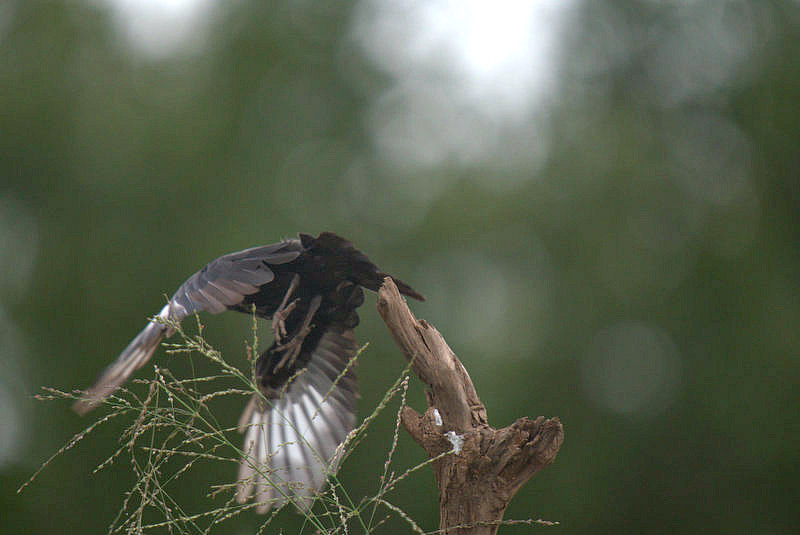 I am out of here…Even though strictly speaking, this bird should have been facing me it was taken on my last morning at the hide and it was the epitome of what I was feeling about having to leave and face the long, pot-hole filled drive home. 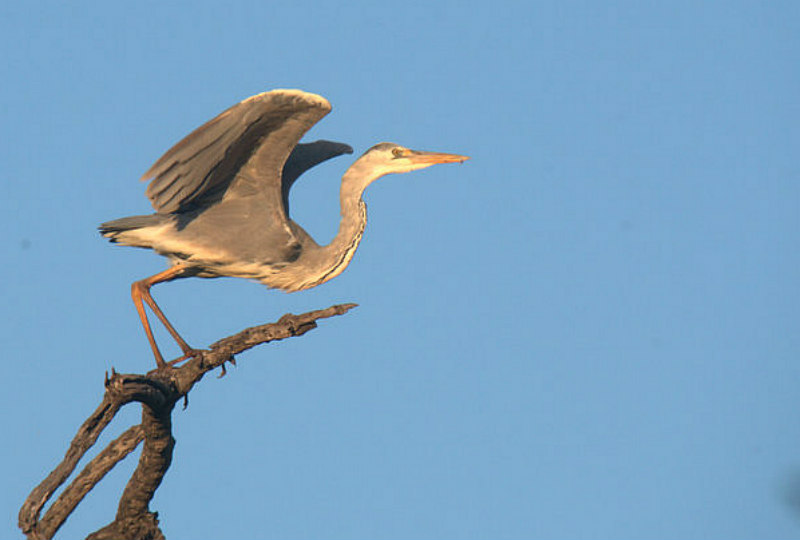 This magnificent Grey Heron sat on the same branch preening every morning so it was relatively easy to anticipate its movements and the direction that it would take off.

That being said, like most amateur bird photographers, I have archives filled with tail feathers in any one of the 4 corners of an image when I have been unprepared for departures.

My time spent in the hide gave me the opportunity to practice these skills and I figure that I got more full-frame images than I ever have before. 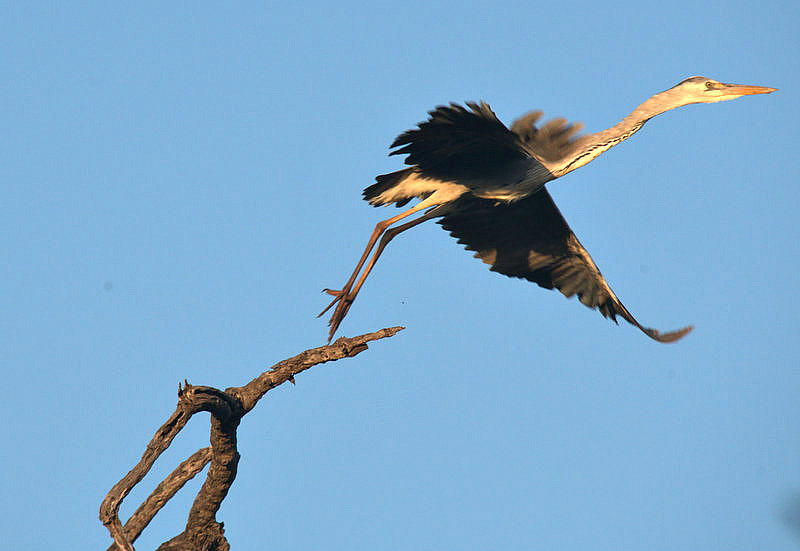 Time to say goodbye? But I will be back tomorrow… 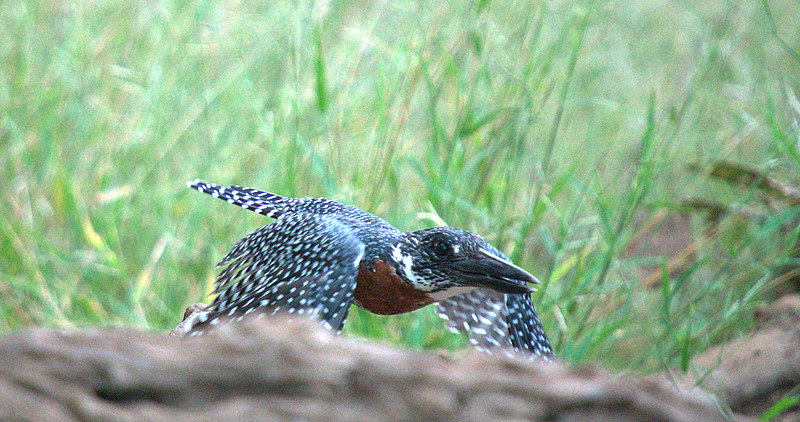 I thought that this Giant Kingfisher was going to fly INTO the hide, but it was searching for food on the far side of the waterhole.

Once again the purists might comment about the foreground being intrusive. But given the fact that the hide sits at ground level, it adds to the effect that the bird is flying close to the ground. 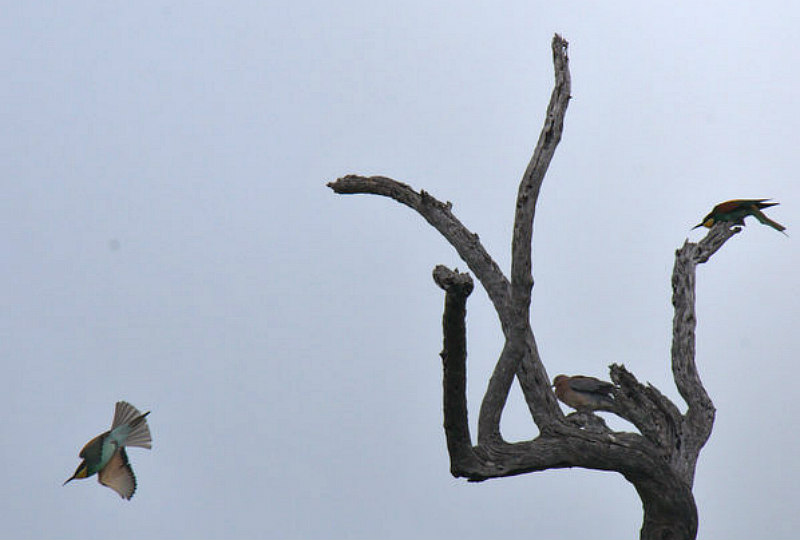 Previously I have never been successful at capturing this species in mid-flight so I was really happy to find this trio of images when I finally downloaded my images. 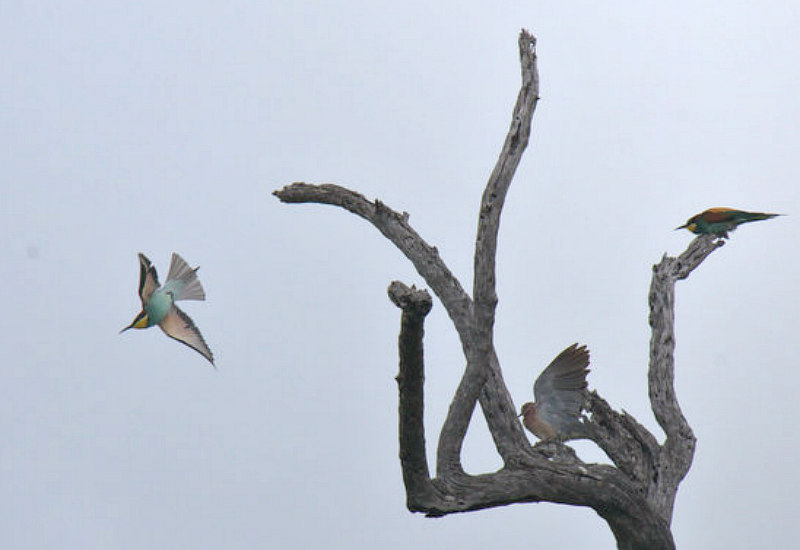 If only the bee-eater on the right of this image had taken off as well. But beggars cannot be choosers and I am happy with what I did manage to capture. 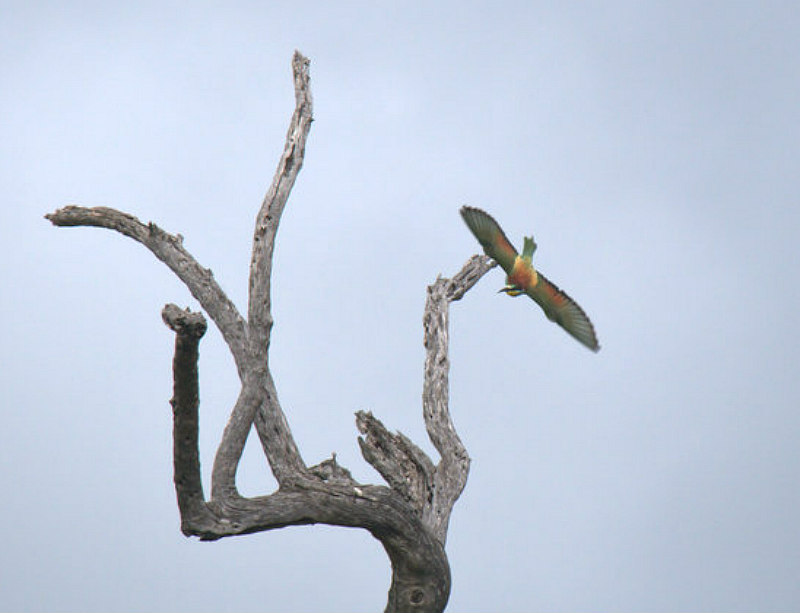 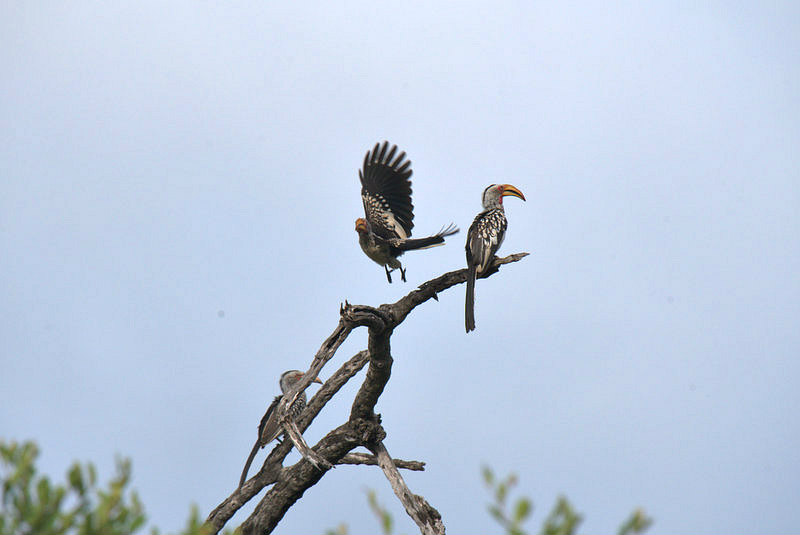 If the Bee-eaters could do it, then this trio of Yellow-billed Ground Hornbills figured that they could as well. 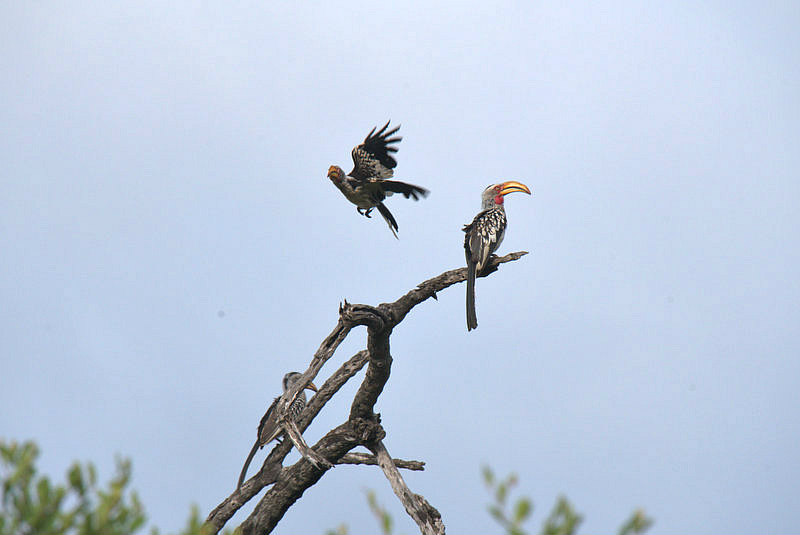 Time to set off and look for some food? Or just get out of the sun…

I am really ecstatic about my time in the hide and the shots that I was able to capture.

And that even extended to this leaping image of an Impala ram that I got while out on a game drive with Ian.

Many years ago I was sitting on a vehicle with an Italian photographer who had a camera that could shoot at a better frame rate than mine. He was getting shots like this, while I was getting only heads or tails and I remember telling my wife that as soon as I  got home I was going to upgrade to a camera body that would provide better than the 3 frames per second I was shooting at then.

I did upgrade but the intervening years have not been kind as far as leaping impala go, until this drive! Do all things come to those who wait? Perhaps this is my Kingfisher shot? 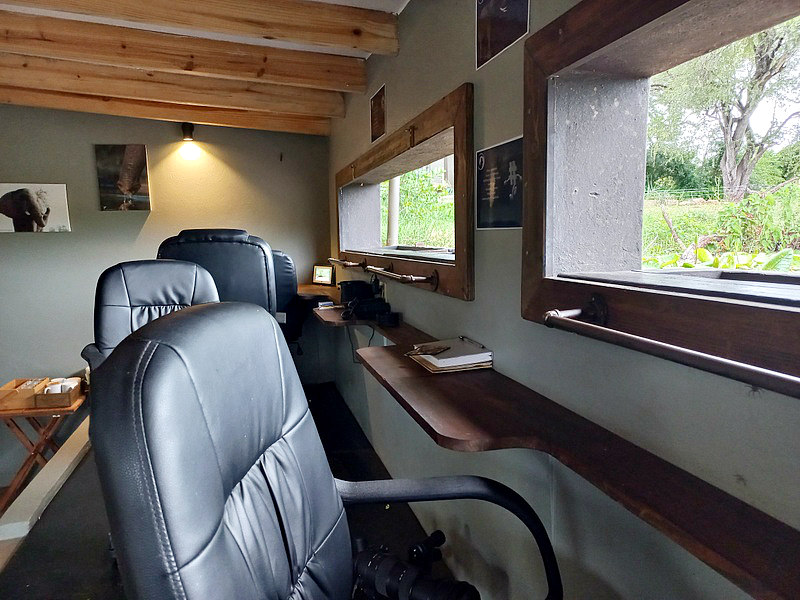 Would YOU like to join me on a photo-safari to this exclusive use bush camp and hide?

Drop me an email at david@travelandthings.co.za and let me show you my new ‘special’ place. I am hoping to conduct a trip there in July 2022, if the numbers warrant it. 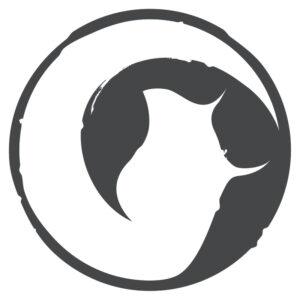 To find out what the Umgede hide offers, click on the logo above. 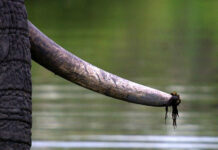