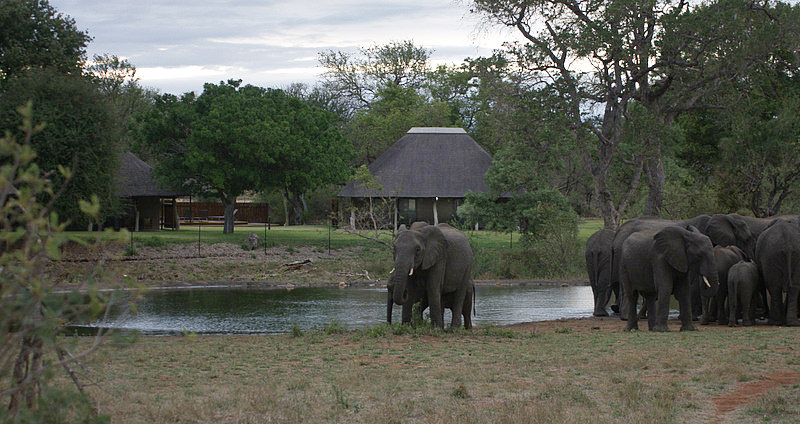 Just another day in Africa? I would like to believe that the game viewing at this lodge makes them unique. The waterhole at Senalala Safari Lodge attracts a large variety of game. From breeding herds of elephants… 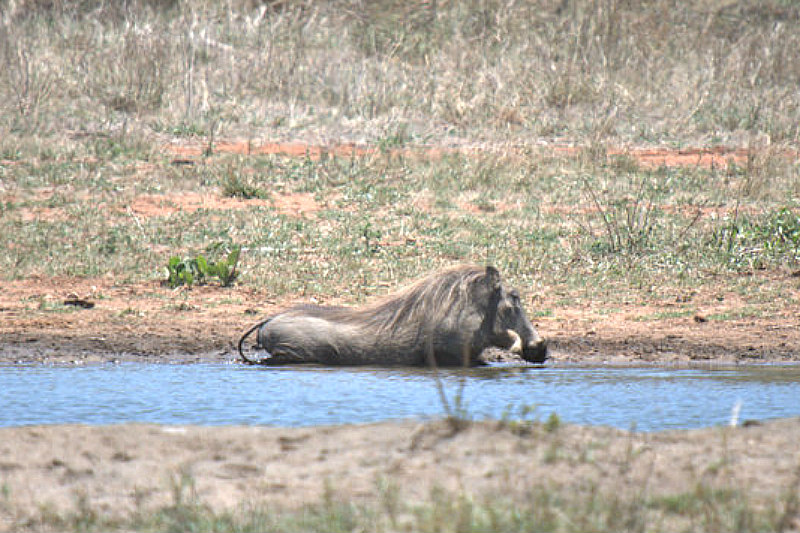 To a seemingly resident warthog that was sighted many times during my stay. He would trot down to the water, drink first, roll around in the mud and then saunter off to a rubbing post before vanishing back into the bush. No doubt to look for a meal before his next visit. 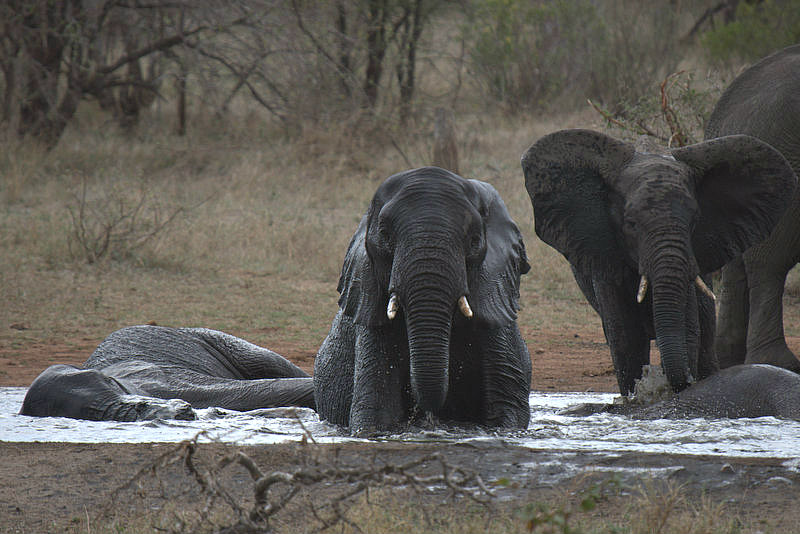 It amazed me that such a large animal can almost vanish in 1m of water. It was a very hot day and this particular herd made the most of the waterhole before wandering off. 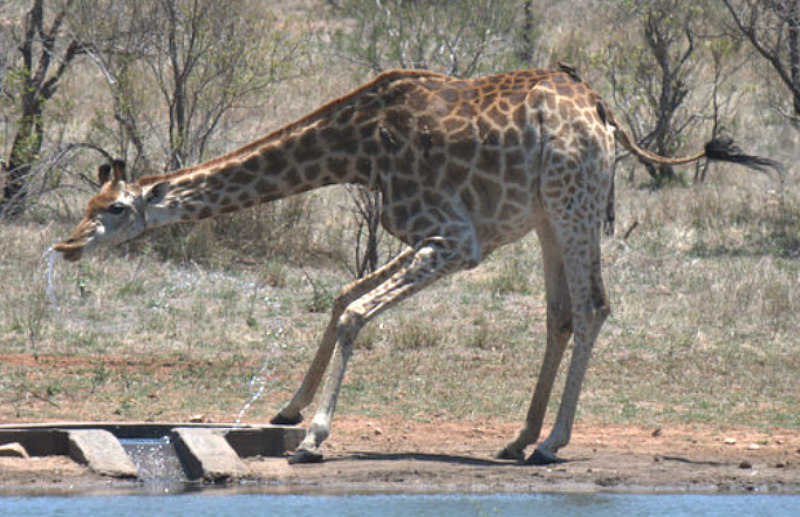 Giraffe are the masters at delayed gratification. They will survey the area for the longest time before going down to drink. I suppose that if you had to make yourself vulnerable in order to drink, you too would be wary of your surroundings. There is a supply of fresh water that is pumped from the camp into the concrete pond on the edge of the waterhole and both the giraffe and the elephant preferred that to drinking from the actual waterhole. 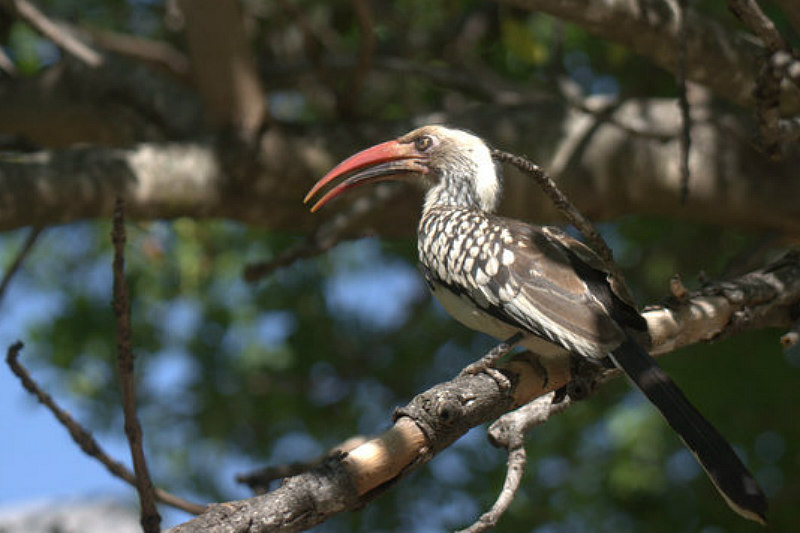 Keeping a beady eye on all the proceedings, both human and animal, was this Red-billed Hornbill. One of many that call the camp home and that will sit and watch for a guest to leave a crumb or an unattended piece of fruit. 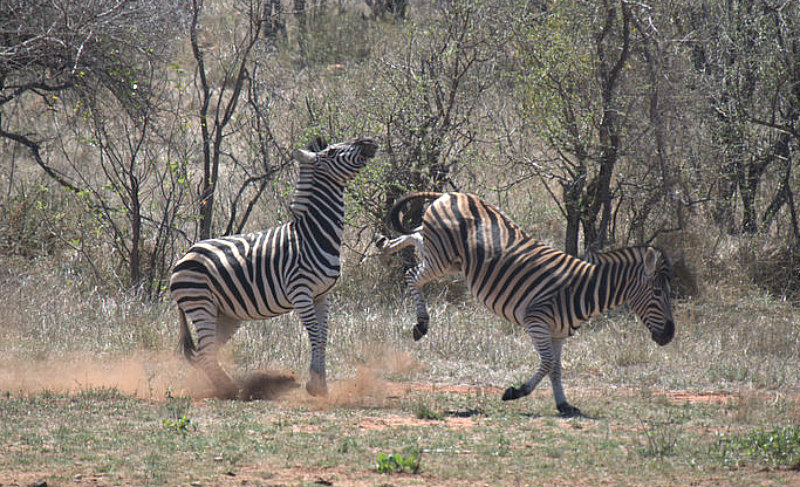 Meanwhile, these zebra were having an altercation about something that was pertinent to them both at the time. Stallions will fight for dominance when it comes to females and the right to mate. Males will bite and kick and are often seen without tails having lost theirs an interaction. Even lions will rather choose females or foals than tackle a stallion that can cause injury or even death. 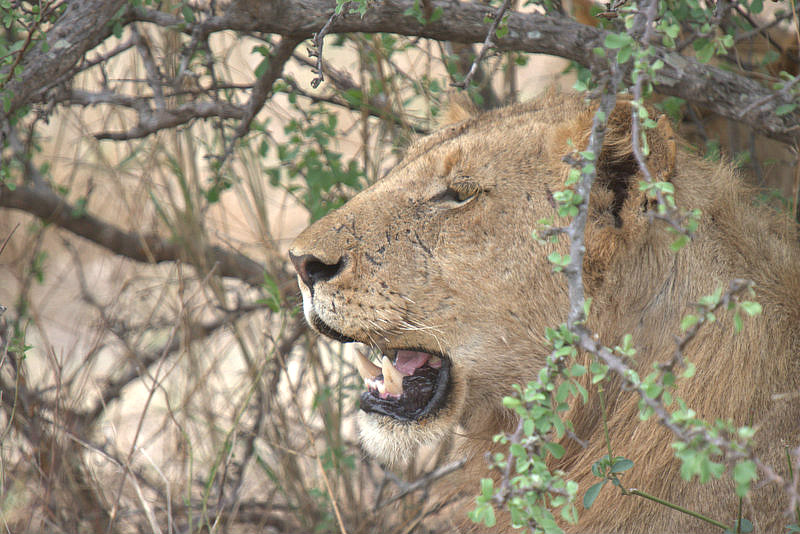 While out on a drive we found a pride of 27 lions on a giraffe kill. Having eaten most of the carcass, the pride was scattered under whatever shade they could find and lay there panting while digesting the meat. While sitting quiety in the game viewer, we observed a second giraffe came towards the pride. Perhaps it was related in some way to the one that had become the prey? The lions paid it no attention and it eventually wandered off. 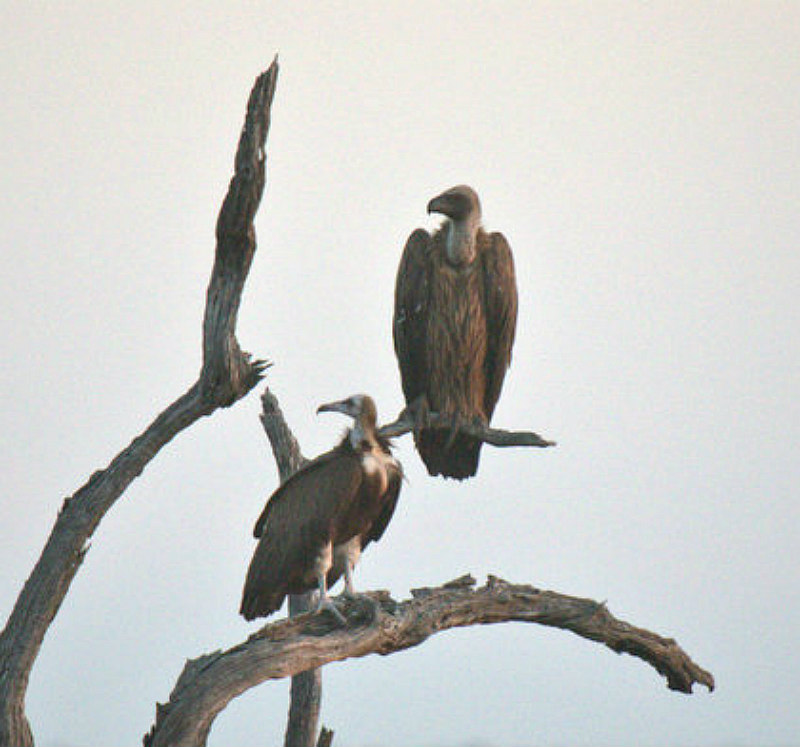 Did you know that the collective noun for vultures was a wake? Well, if you did not, then you do now. The two vulture species represented here are a Cape Vulture(top) and a Hooded Vulture (bottom)  and they were ensconced in the tree not too far from the lions and the remains of the giraffe. 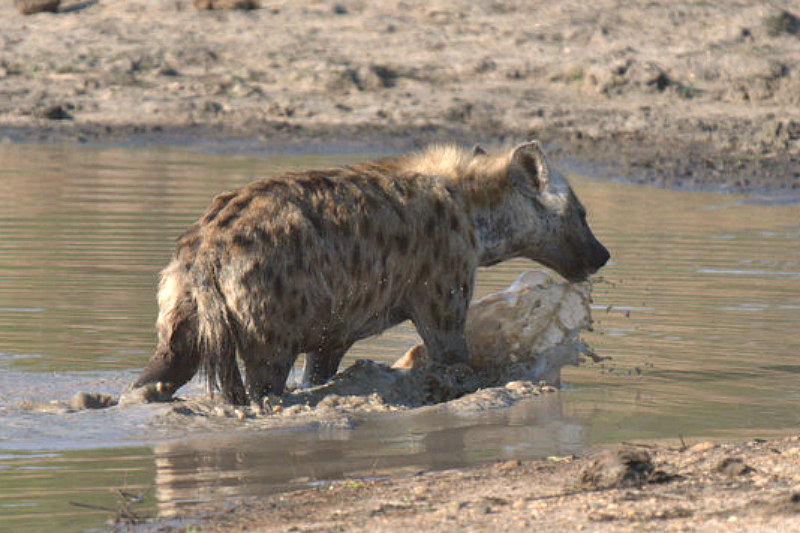 Another interesting fact… hyenas enjoy being in the water when it gets hot. 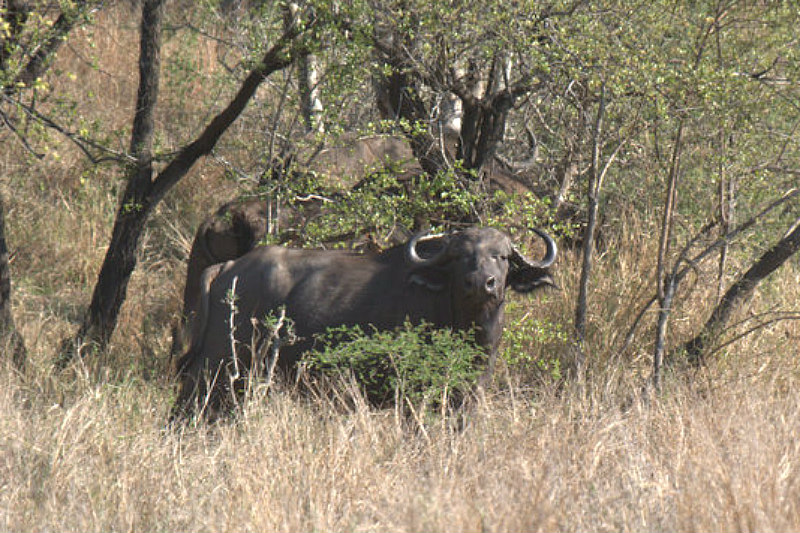 Just part of a huge herd that crossed the main road between the Klaserie and the Timbavati Reserves. It was almost as if each one HAD to stop and glare at us before moving on. 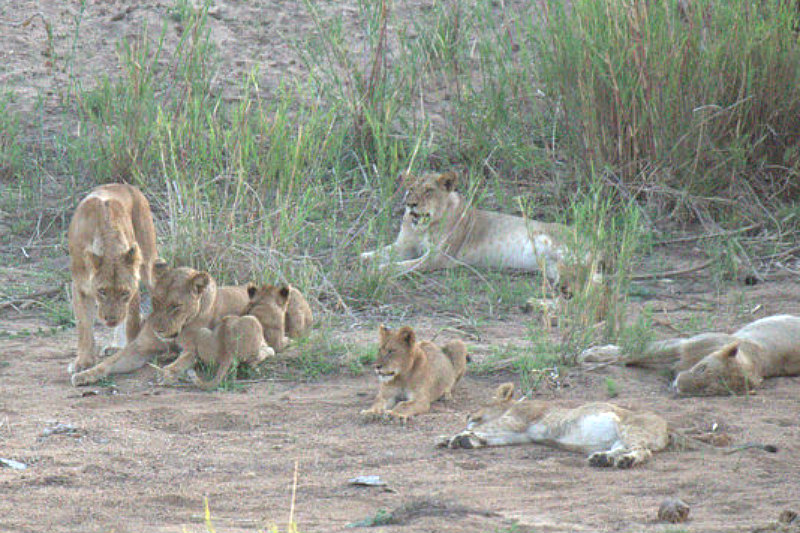 This was the giraffe pride that had left the kill to the vultures and possibly other scavengers and had gone to the river to slake their thirst and relax on the cool sand. 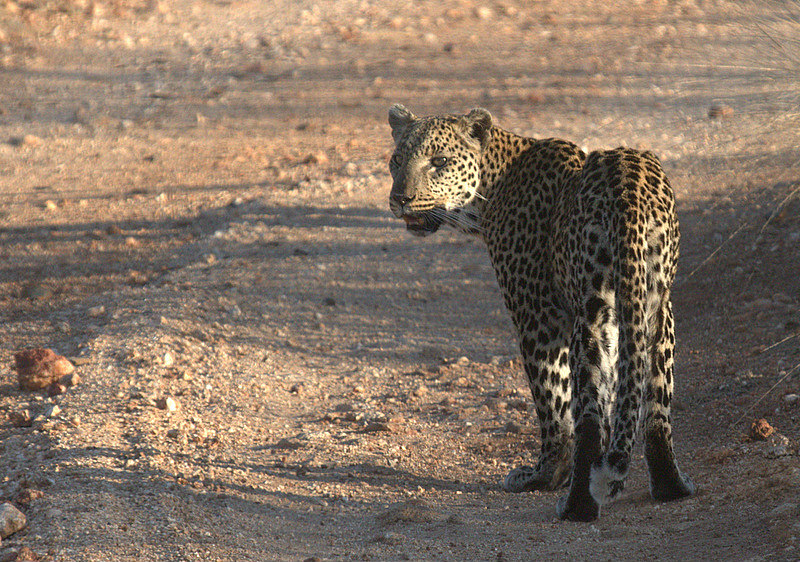 An unexpected but very exciting sighting. This female leopard stepped into the road while we were heading away from the lion sighting at the river. 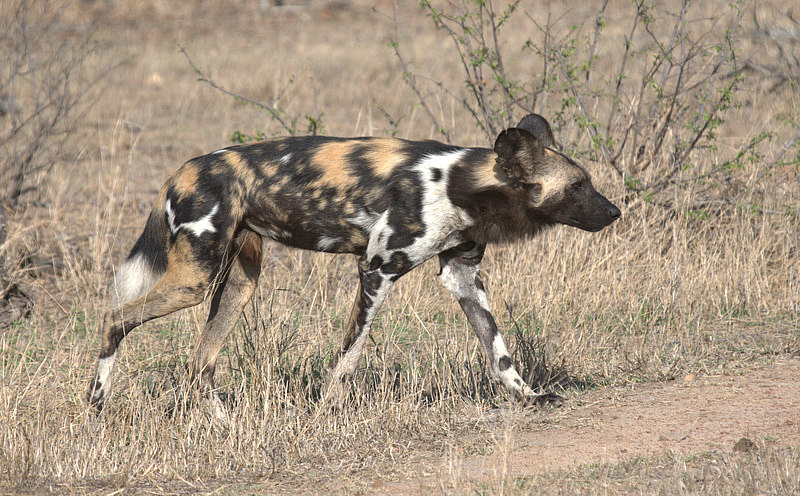 A wild dog sighting is always special. On a previous visit to this reserve we had spent time with this pack, so it was exciting to find them again. They were lying in the shade and not being too active. These two images are to show how different the colouration on each animal is. Having white a the predominant could is relatively unusual, but not rare. 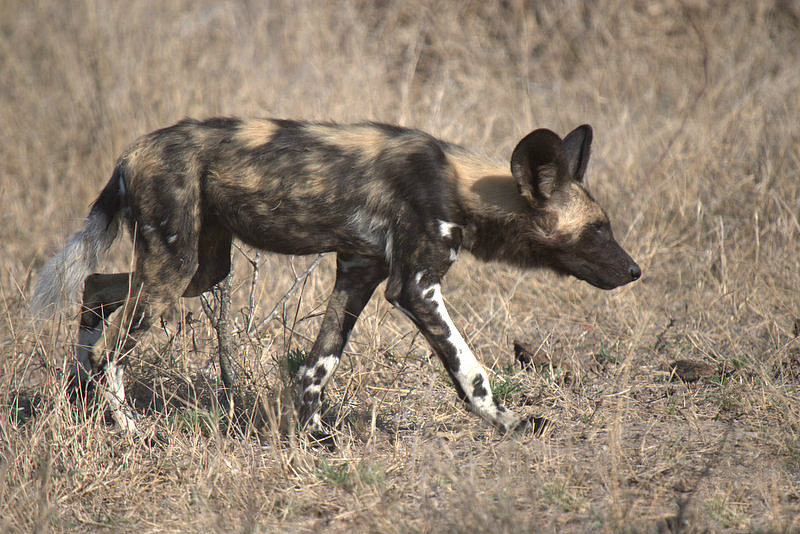 This youngster on the other hand has very little white in its coat. 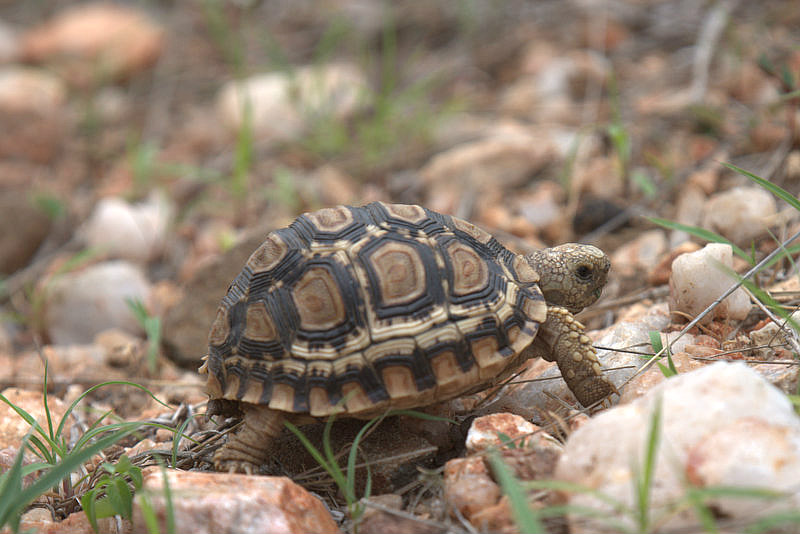 I did not know that tortoises can predict rain…did you? It seems that they can detect the drop in barometric pressure that precedes rain and will look for high ground where they will be safe. 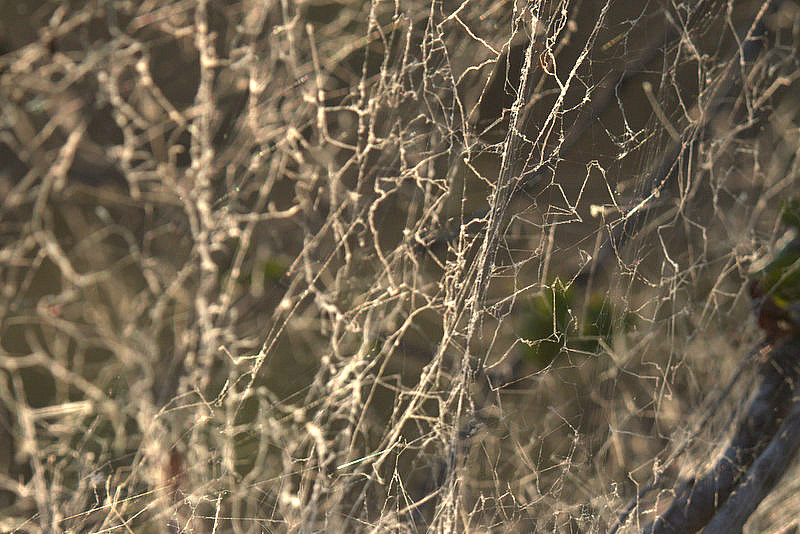 You do NOT want to stumble into this while out on a walk. This is just part of the very intricate structure that surrounds a Communal Spider web. Luckily it is very visible and unlike the Golden Orb sider web less likely to be caught up in. 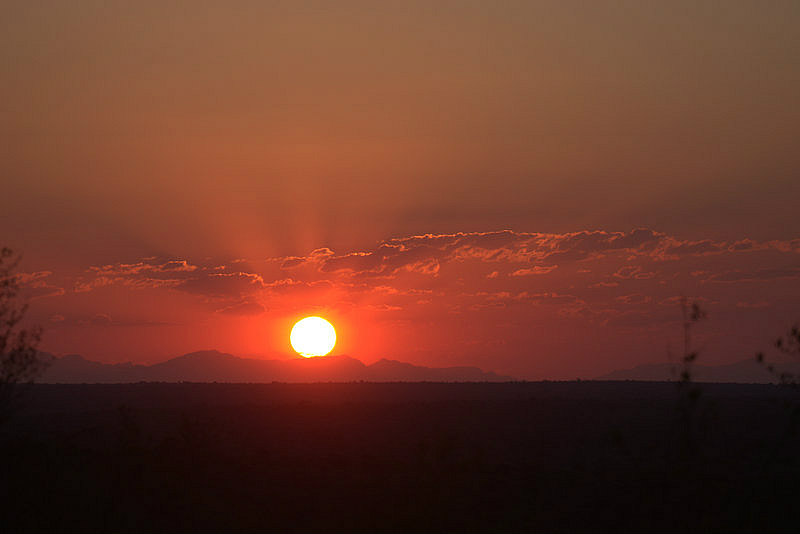 Sunset over the African bush and the end of yet another opportunity to learn and experience the immense vastness of the surroundings and what we can learn from nature if we are receptive. 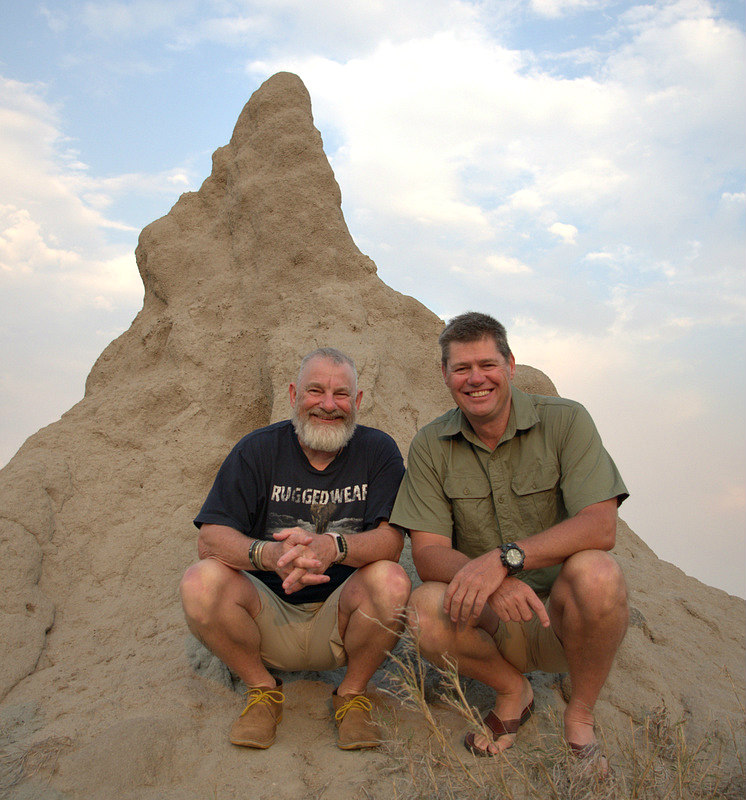 I thought that this was a large termite mound, but the world record is 12.8m and it/was in the Congo. But this was big enough to form a backdrop for me and guide extraordinaire, James Steyn who, together with his wife, Corlia, manages the lodge.

If his face looks familiar, he was the host of the tv series 50/50 for a year back in the day. It was a privilege to spend time and learn from with James, both while in a vehicle and on foot.

I think that what I learned from James is encapsulated by the words in this poem, attributed to Saint Seraphim of Sarov:

“Drink water from the spring where horses drink. The horse will never drink bad water. Lay your bed where the cat sleeps. Eat the fruit that has been touched by a worm. Boldly pick the mushroom on which the insects sit. Plant the tree where the mole digs. Build your house where the snake sits to warm itself. Dig your fountain where the birds hide from the heat. Go to sleep and wake up at the same time with the birds – you will reap all of the days’ golden grains. Eat more green – you will have strong legs and a resistant heart, like the beings of the forest. Swim often and you will feel on earth like the fish in the water. Look at the sky as often as possible and your thoughts will become light and clear. Be quiet a lot, speak little – and silence will come in your heart, and your spirit will be calm and full of peace.”
Nature is talking to you, are you listening?

To find out more about what the Lodge offers, click on the logo to visit their website.

To find out more about the range that Ruggedwear offers, click on the logo to visit their website.