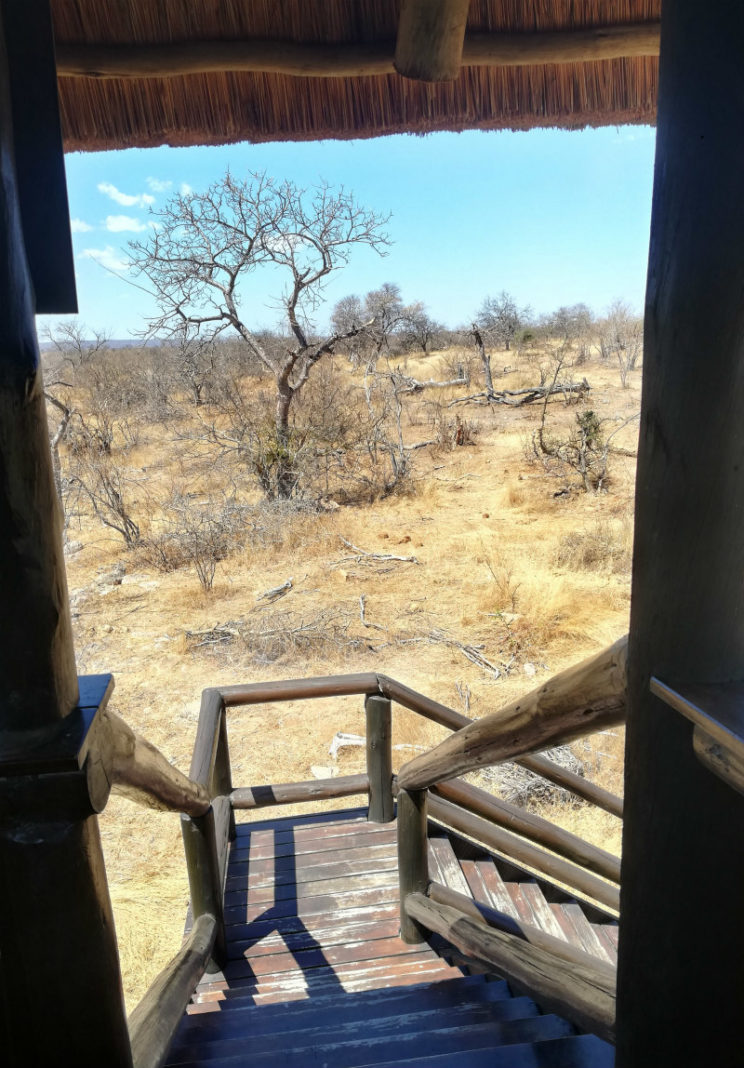 Sometimes solitude is what is required as part of any safari holiday and during my stay at Naledi Game Lodge, I was grateful to spend a few hours on my own, well away from the main lodge at Rosie’s Pan. Situated about 20 minutes away from camp, guests can request to spend time there either alone or as a group. I chose to do an early morning drive, have breakfast and then, leaving my wife behind, I was dropped off at this above-ground hide. I suppose that predator species could if they really wanted to, climb the stairs and turn what was meant to be a peaceful time into an exciting experience. But most animals would rather not interact with humans if given the opportunity. 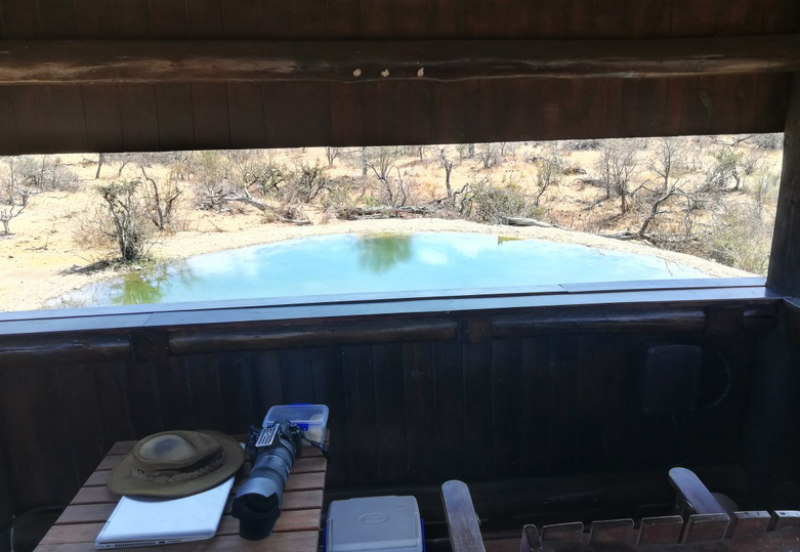 This was going to be my view for the next three hours. All alone, literally and figuratively. 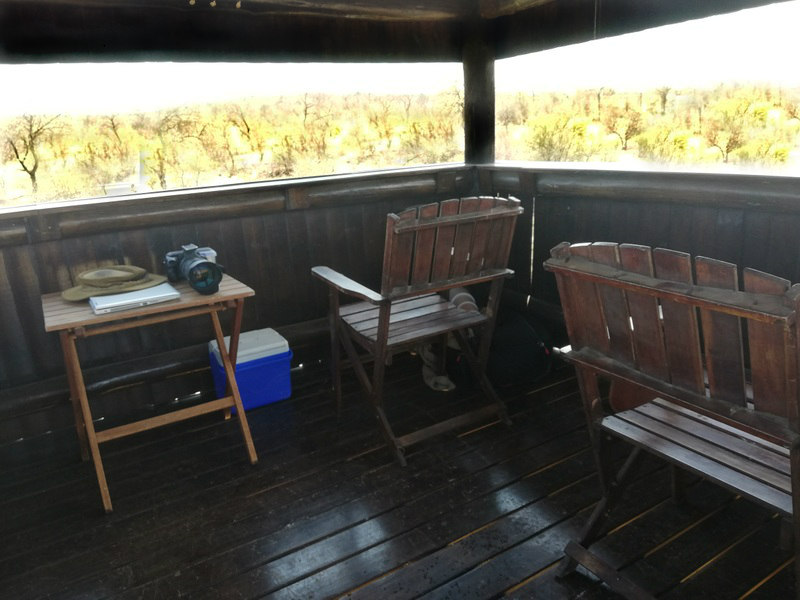 I had seen a solar panel and I thought that I could use my laptop while I waited for the vast herds to descend upon the water. But as it turned out the panel was to operate the camera that linked back to the lounge in the main lodge and the animals had not received the memo about pitching up for photographs. 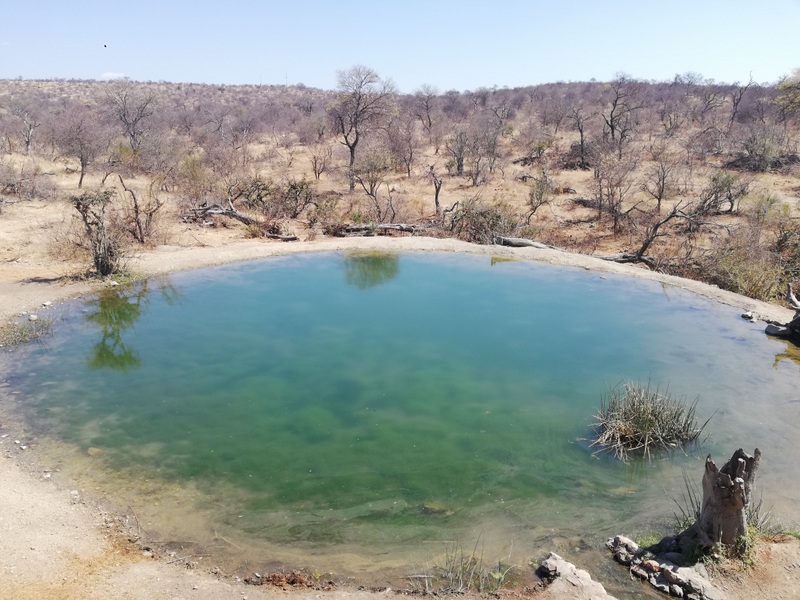 And so, this remained my view for about two hours… 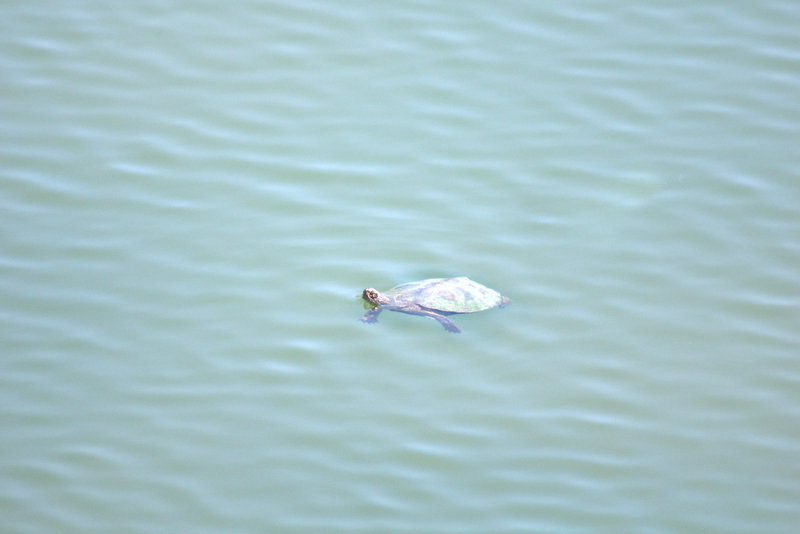 With only one lone terrapin to keep me from nodding off… 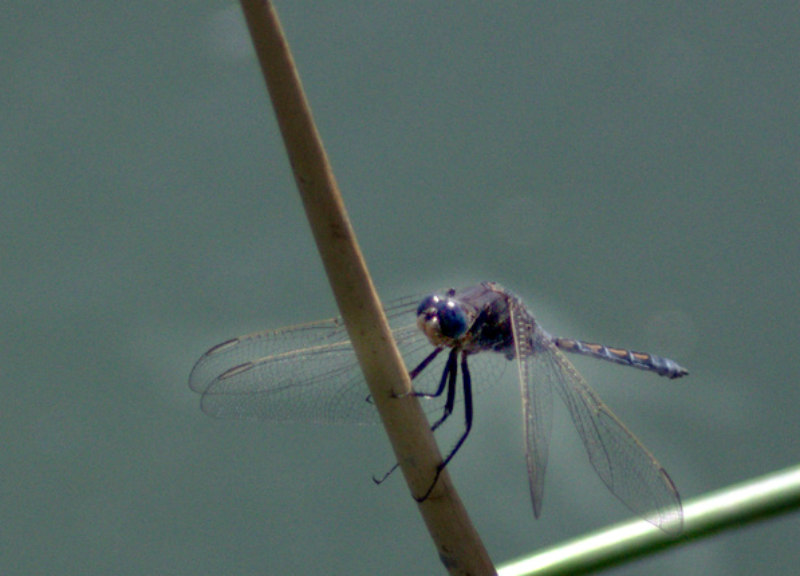 And a Damselfly that was preening itself on a stem of a water plant. It was better than nothing as this gave me some practice in shooting fast-moving objects… 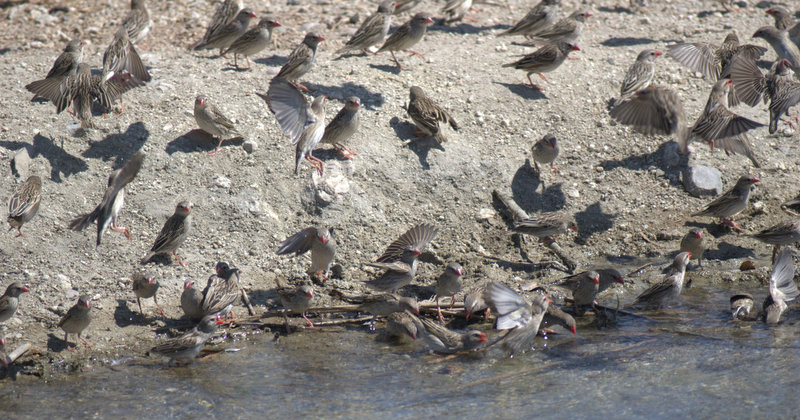 Suddenly the peace and quiet were shattered as flocks of Red-billed Quelias descended onto the rim of the pan to take quick sips of water before rising up in a singular almost conjoined mass to perch in some of the trees in the surrounding area. And no sooner had the massive flock alighted on the branches, than it was back to the water again. This particular species of bird numbers in the billions worldwide and there are more individuals than domestic chickens. 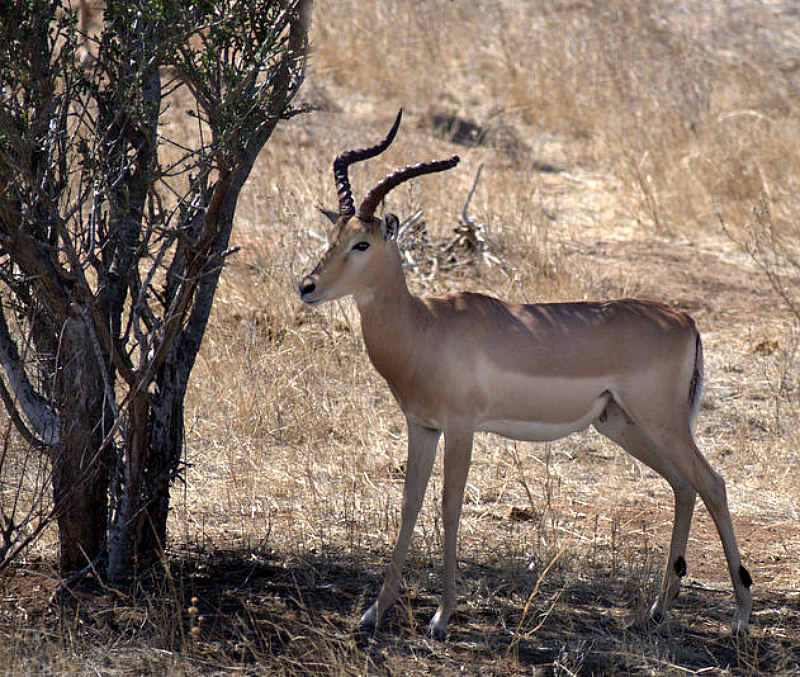 The flocks of birds sort of signalled the start of the animal arrivals. A lone Impala ram was the first to turn up. Rather skittish, he stood in the shade, contemplating if he should approach the water or not. The broken tip of his horn signalled the fact that he might well never become a father, as only the fittest and the strongest get to breed. But then again I might be wrong and this could be a battle that he actually won. 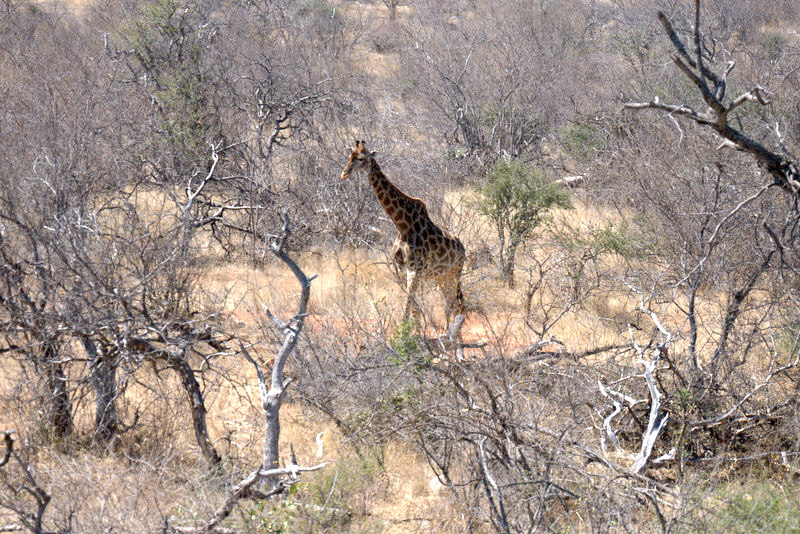 The Impala was followed in by one giraffe, who in turn was followed by several more. And thus began a series of arrivals and departures that I had been anticipating for the past 2 hours. “How many times do I have to tell you”! That is what this Red-billed Oxpecker seems to be saying. 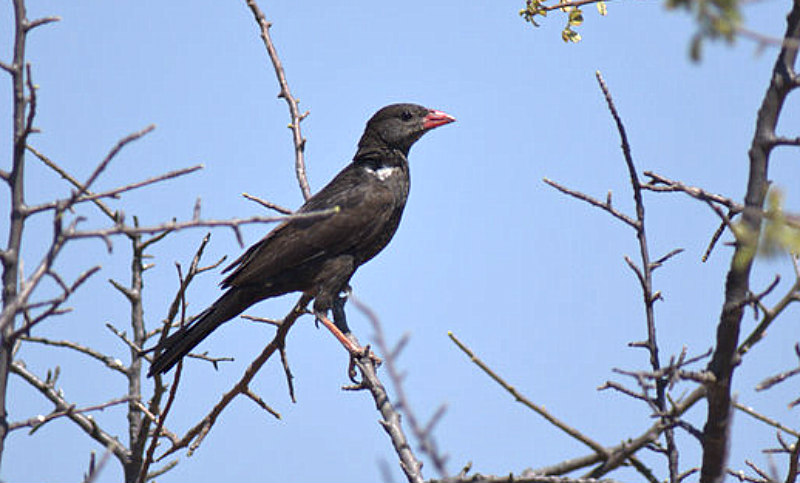 A rather scraggly looking Buffalo Weaver. One of the few that I have seen away from their large communal nests. 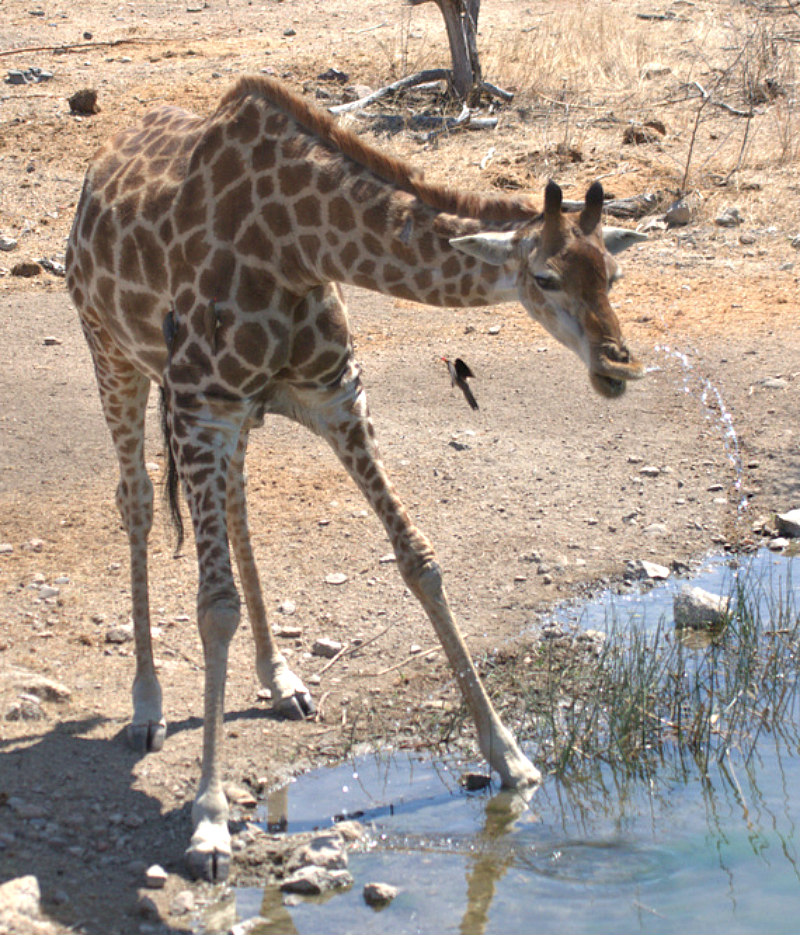 Talk about a long drink of water… I waited for what seemed like an eternity for this giraffe to lift his head from the dam. 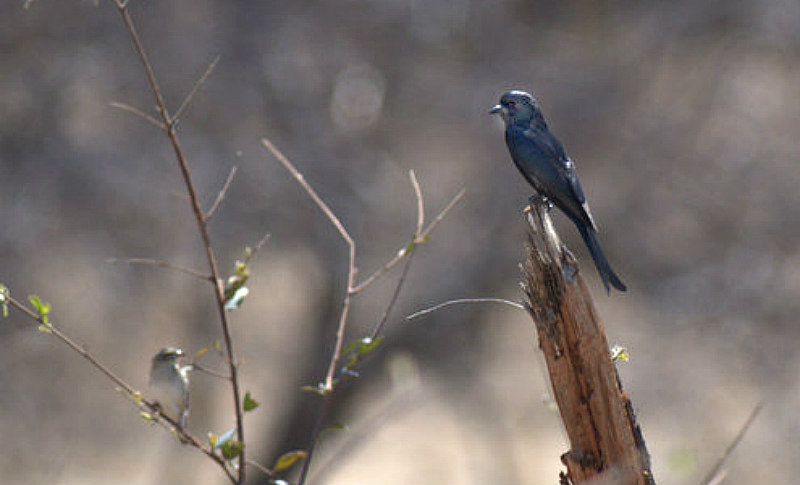 A Fork-tailed Drongo. One of the best mimics in the bush. They are able to mimic both predators a prey species, thus giving them an opportunity to steal food from unsuspecting birds or animals. In certain areas, like the Kalahari Desert, the Drongo can mimic the distress calls of other bird species, but the alarms sounded by meerkats as well. Drongos are able to deceive more than 25 other species in this manner! 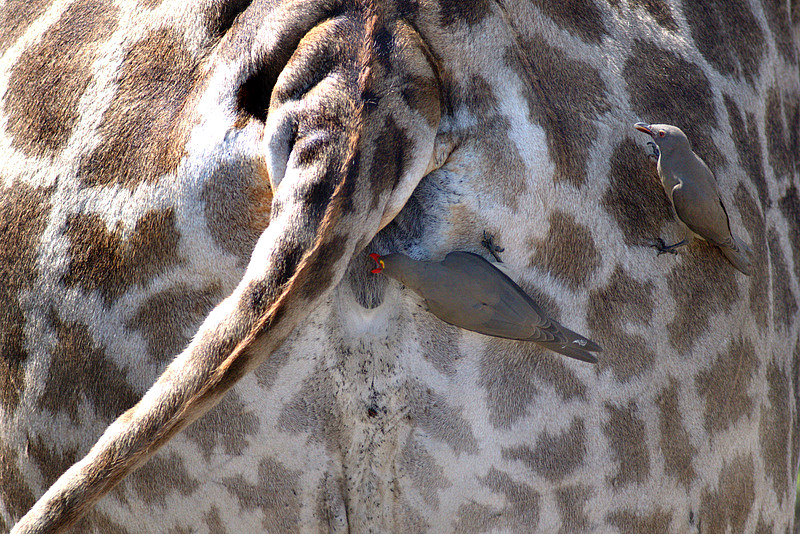 Does this seem to be where all the best snacks are kept? 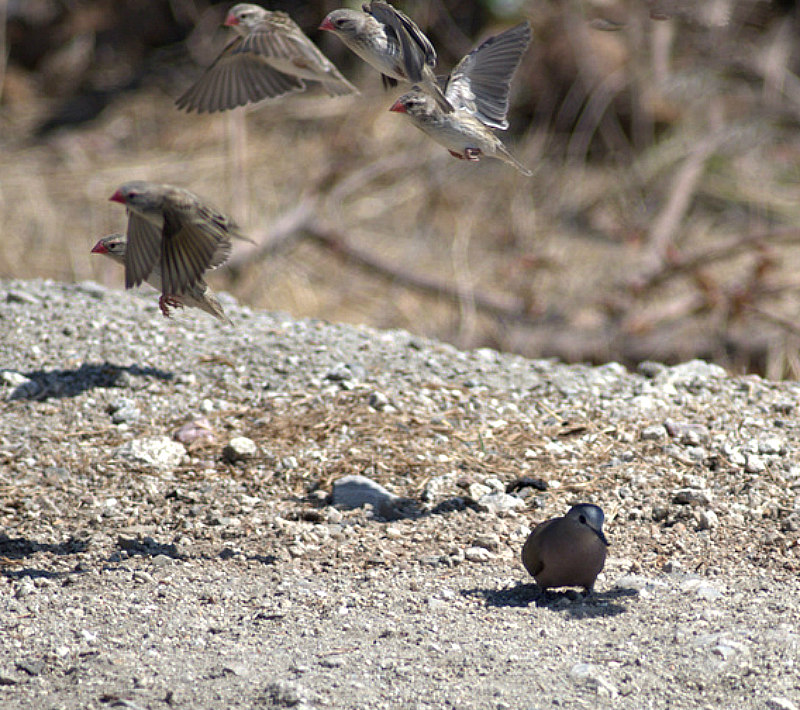 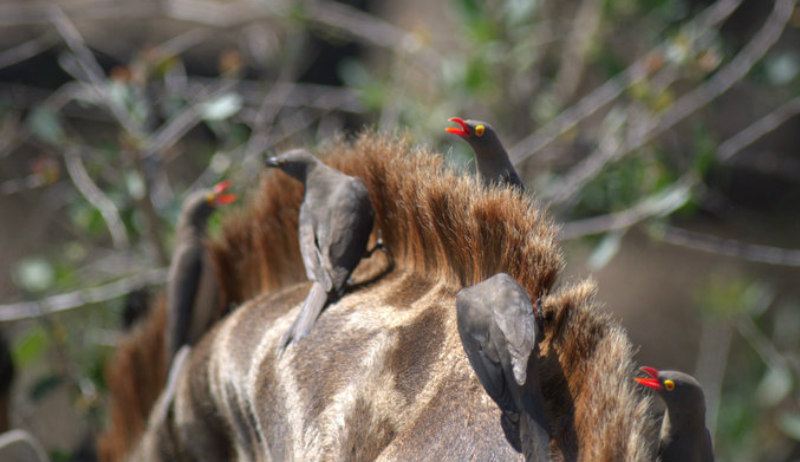 Red-billed Oxpeckers. If you learn NO other bird-calls, learn theirs as it might save your life one day! The reason is that where you find large dangerous game, specifically buffalo, you will find these. And by being able to identify their calls, you will be able to take evasive action if you are out on foot. 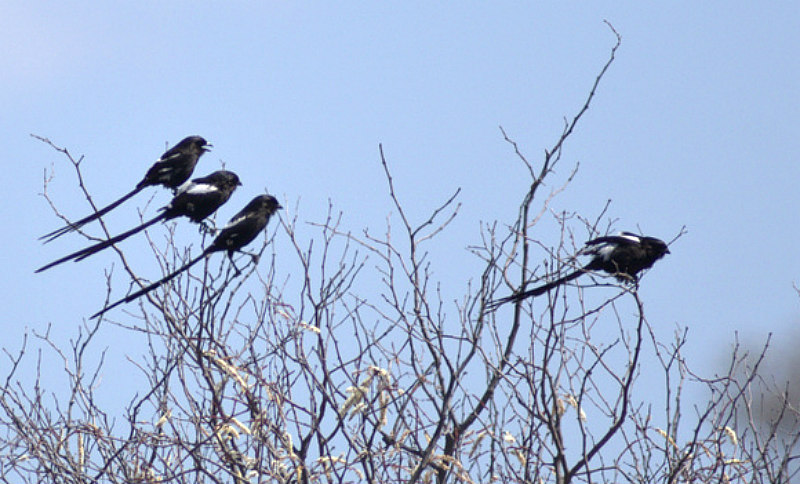 The trio of Magpies Shrikes seems to have ganged up on their fellow flock member. The tribe has spoken? You are the weakest link? And NO, you cannot call a friend… 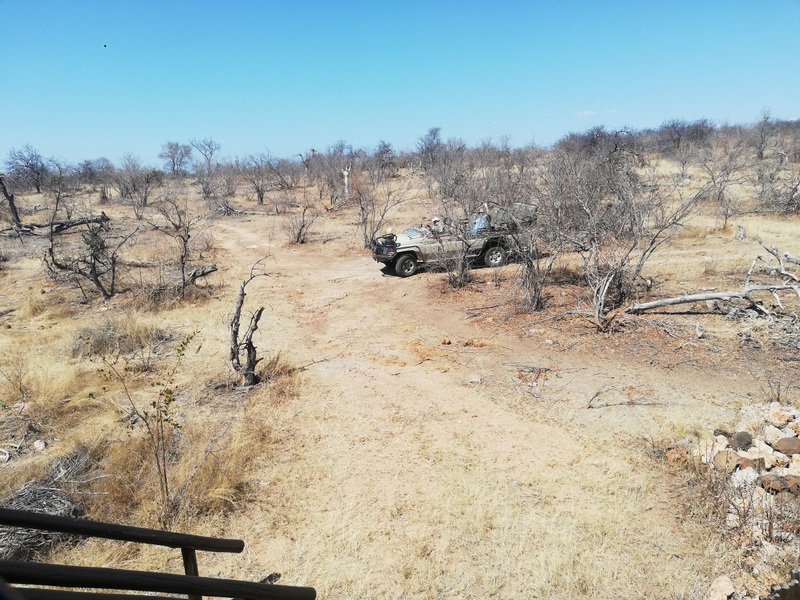 My wife returns to collect me so that I can return to the lodge for lunch. 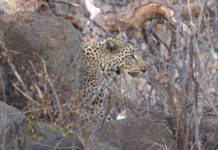 Nostalgia ain’t what it used to be. The working years.

Swimming with dolphins, a tour organised by Eco & Cultural Tours,...

In the “cute” zone.Young and wild