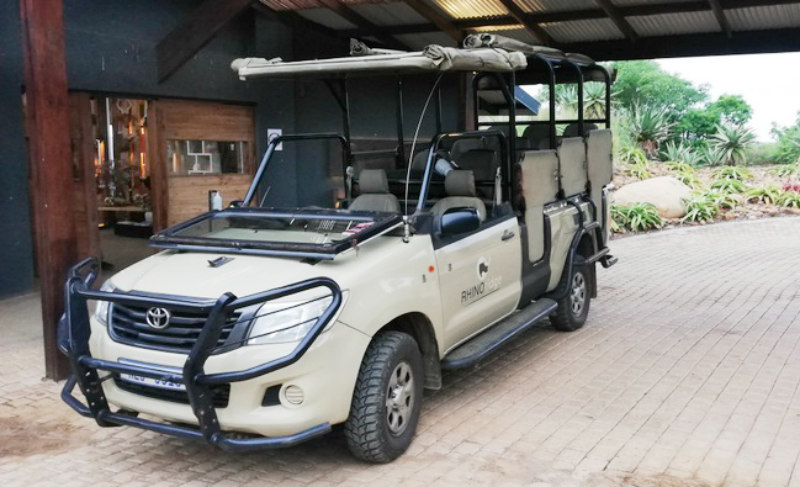 When in a vehicle, it is easy to become complacent and only look out for large mammals and birds. However, at Rhino Ridge Safari Lodge, guests are offered the opportunity to partake in game drives or walks. Seeing that my wife and I were only here for one night, we did two drives, evening and morning AND we were able to get in a walk before heading home. 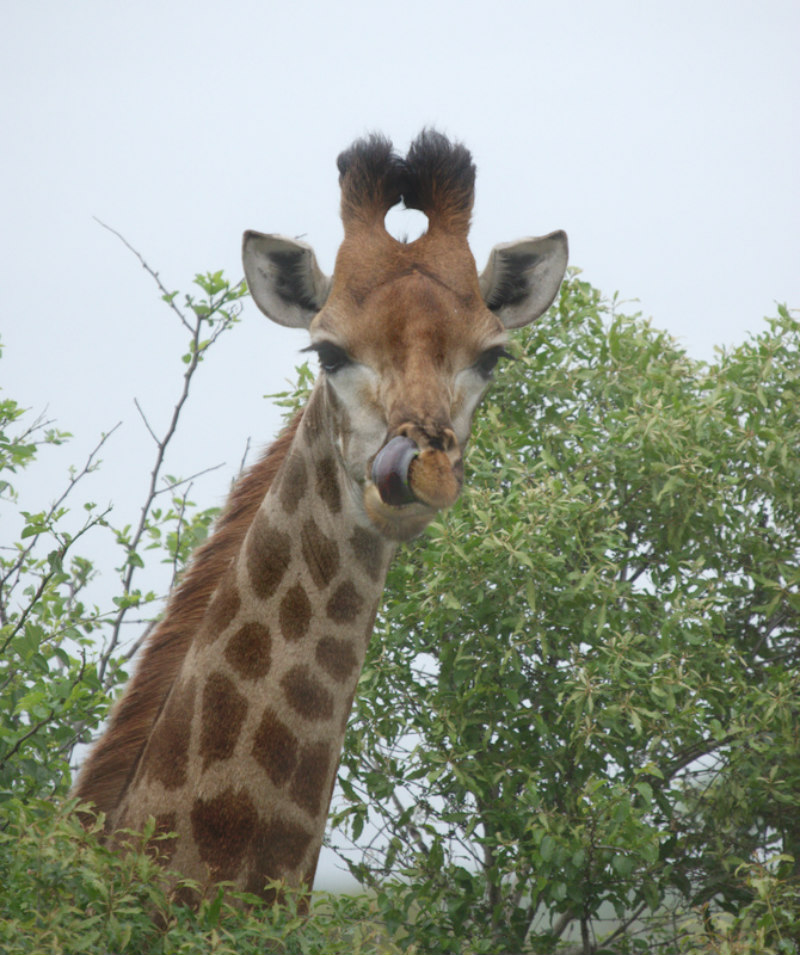 Giraffe seem to enjoy sticking their tongue up a nostril. But if your tongue was 45cm, would you not lick your nose instead of scratch it? 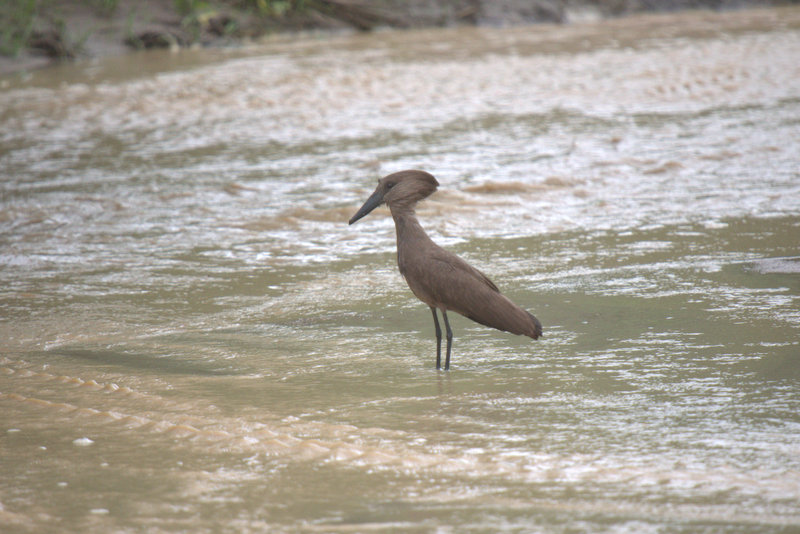 A Hammerkop looking for an ‘easy’ meal? Frogs and fish form part of its diet and neither is easy prey. 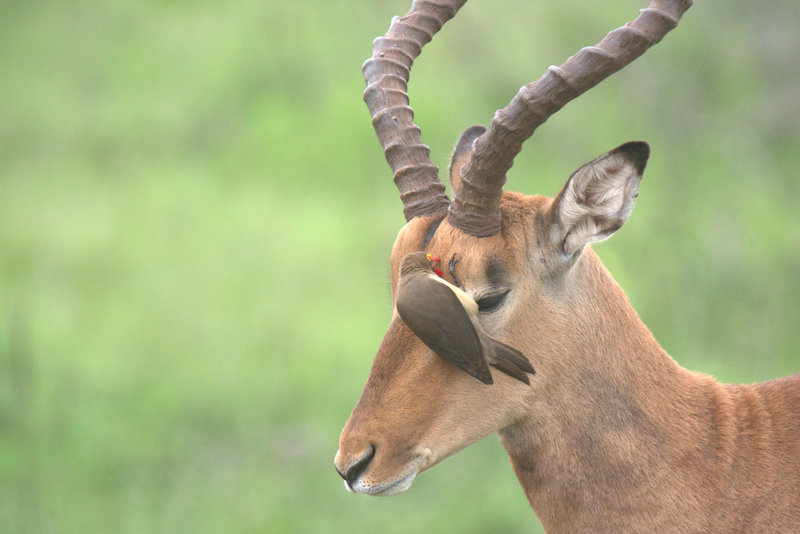 When a facial is an option. This Red-billed Oxpecker is helping to keep the Impala ram free of ticks and parasites. When they settle in numbers, like they often do on the neck of a giraffe for instance, they can become an irritant for the animal concerned. However, they are a great early warning system when predators are in the vicinity. If you learn only one bird call, then learn this one as it could be a life-saver. 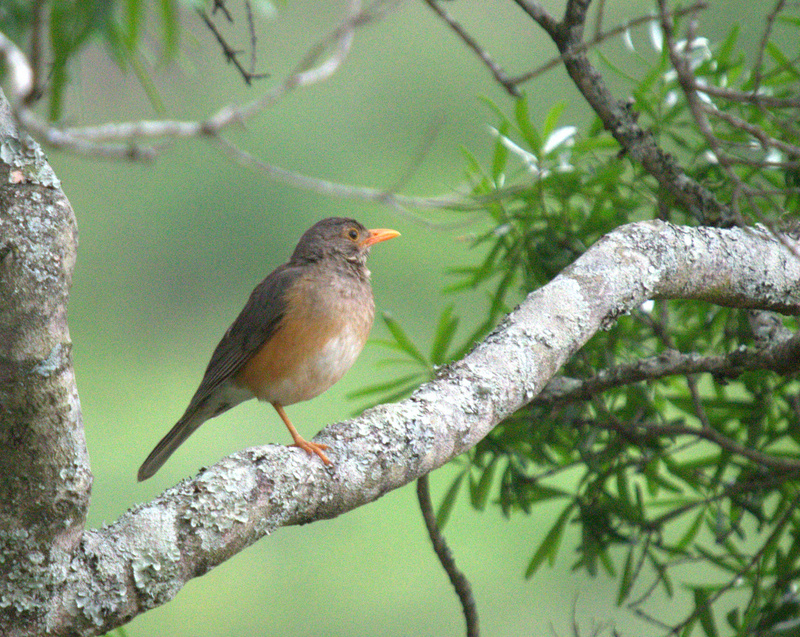 Kurrichane Thrush, which actually had two legs. But is steadfastly refused to put the second one down while I was taking pictures. The moment I lowered my camera, down came the leg… 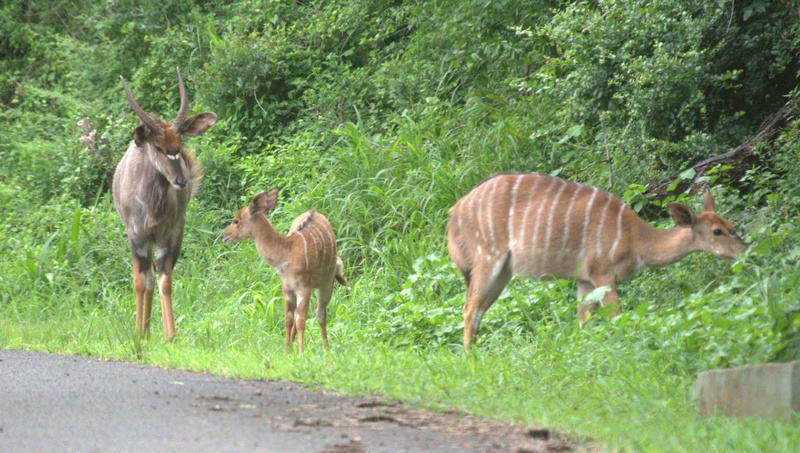 A complete Nyala family, male, youngster and female. In isiZulu the male Nyala is referred to as ijakhethi ( a jacket) because of his colouration. All Nyala start life looking like females, a light fawn colour. As the male ages, it retains the light colouring on the legs, but the majority of the coat becomes grey…hence their local name. 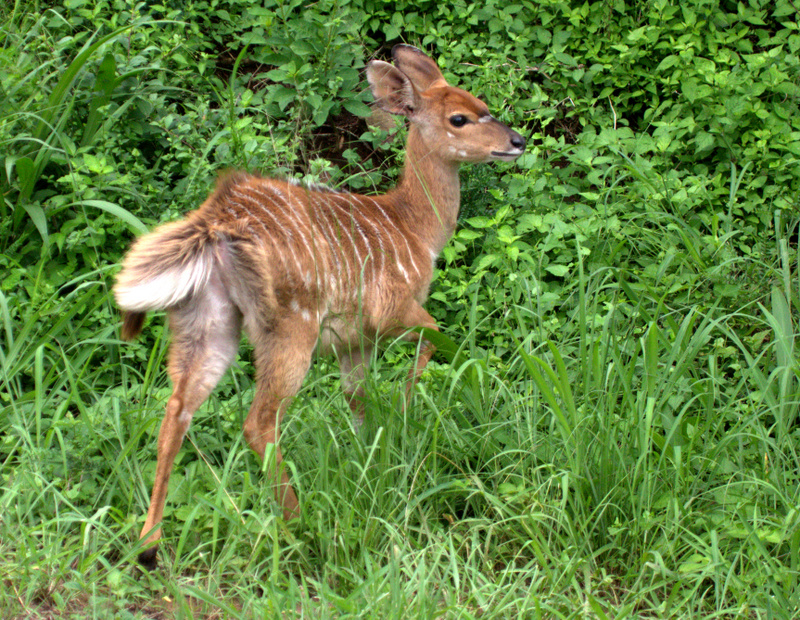 In a wildlife posting there has to be at least one cute image. And here it is, a baby Nyala that was just about to follow mom into the thick bush on the side of the road… 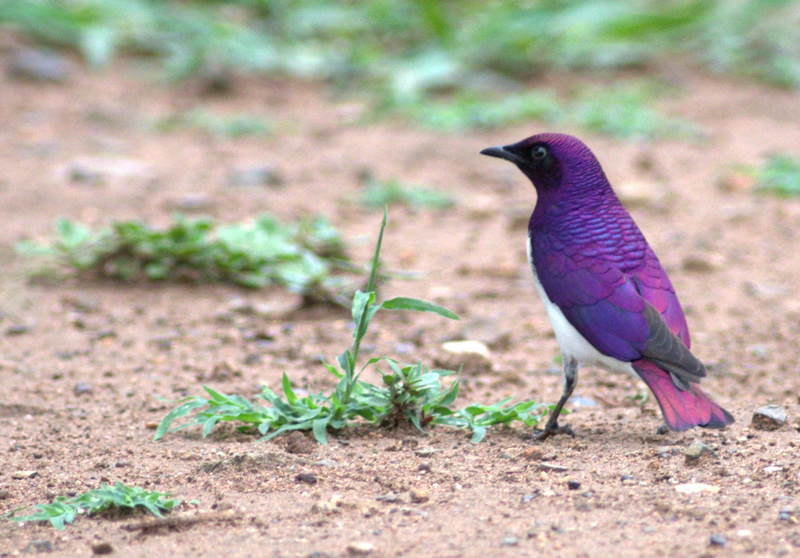 Violet-backed (plum-coloured) starling. One of the most striking Starlings I have ever seen. Not a species that usually seen in either Johannesburg or the Lowveld. 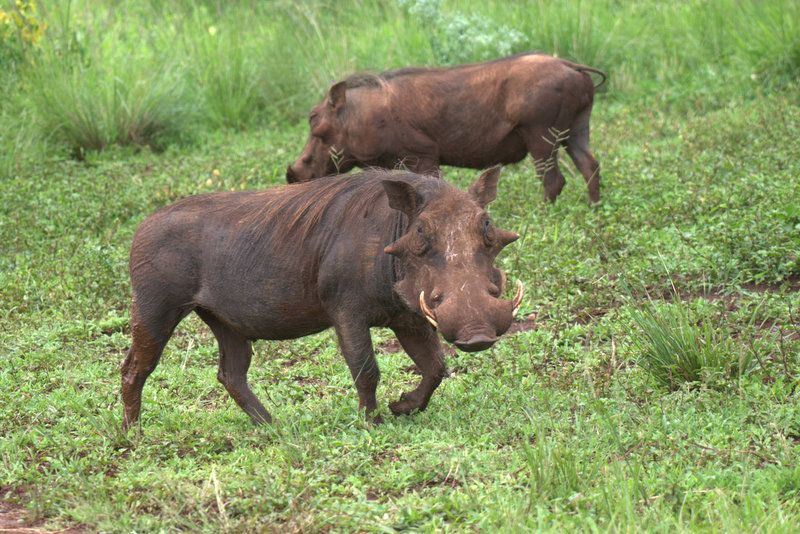 An animal with a very different temperament than Pumba in The Lion King. Warthogs can do serious damage with their tusks. It is their lower set that is usually razor-sharp and is used as both a defensive and attack weapon. Both the adult males and females can be unpredictable, the latter especially when they have piglets. 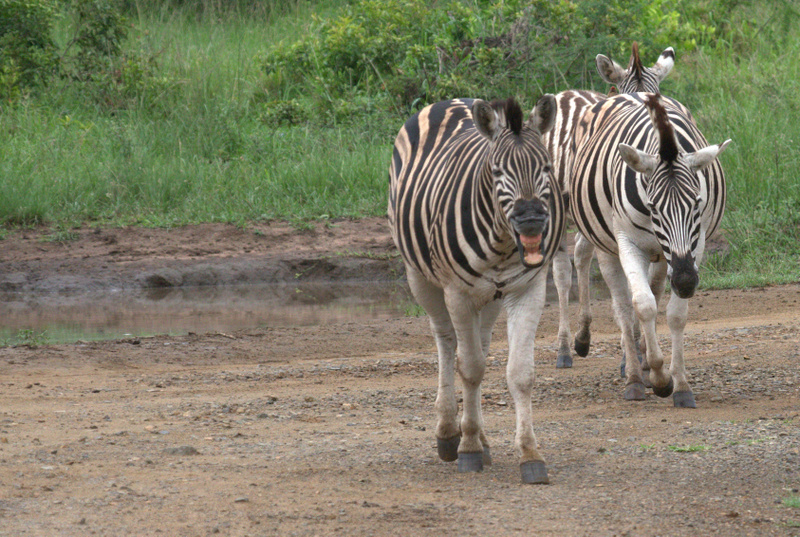 It is all just a big yawn. Zebra are one of the most iconic of the game species found in Africa. They seem that have been included, together with giraffe, on the guest wanted to see lists.

When you are out on foot the world of insects and plants opens up. Time to safely load the rifle before setting off on a walk. These walks are carried out under the guidance of trained staff who will make certain that it becomes a memorable learning experience for guests.

“The herd went that way”? There is no better way to experience wildlife than a walk under the expert care of experienced field guides. It brings a whole new aspect to the way in which guests are able to ‘interact’ with wildlife both big and small. 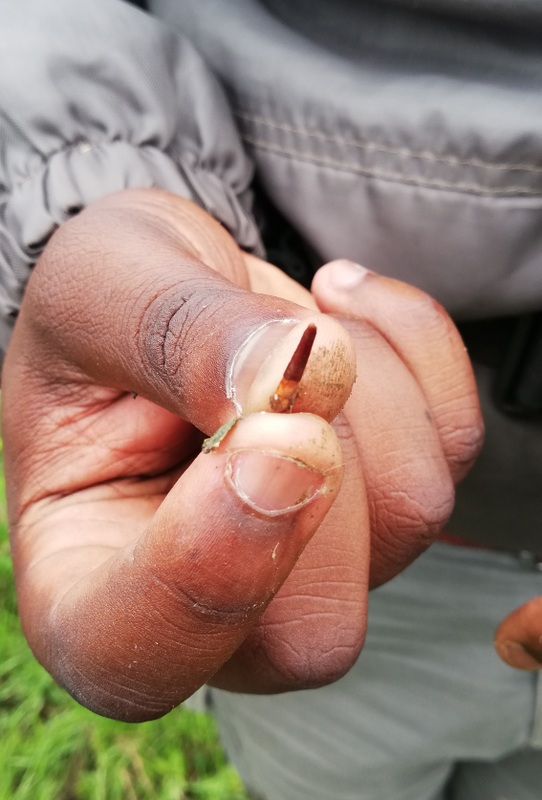 This thorn pierced the tick sole of my wife’s walking boot, making her cry out in pain. Amazingly neither of the guides, nor I, had our multi-tools on hand, so it took some bush ingenuity to remove it so that the walk continue pain-free.

When you in rhino country, there is nothing more exhilarating than to come across a white rhino female with a calf. Both were very relaxed and we were able to spend some time watching in awe as they went about their business. 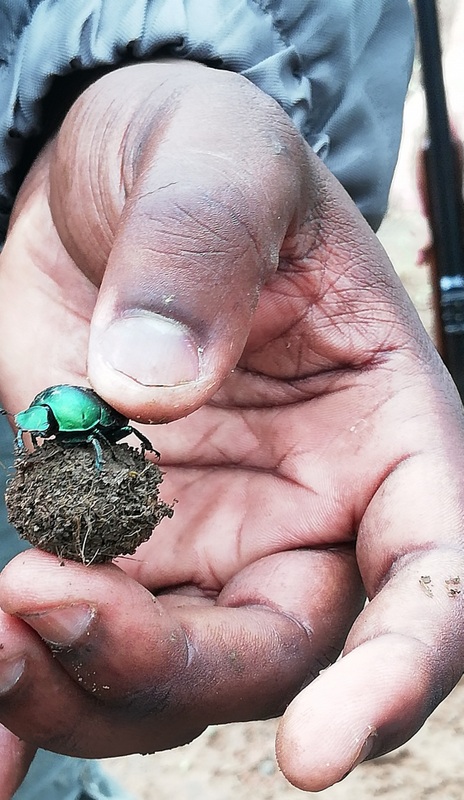 A spectacular Dung Beetle…it is a shit job, but someone has to do it and these beetles are experts. 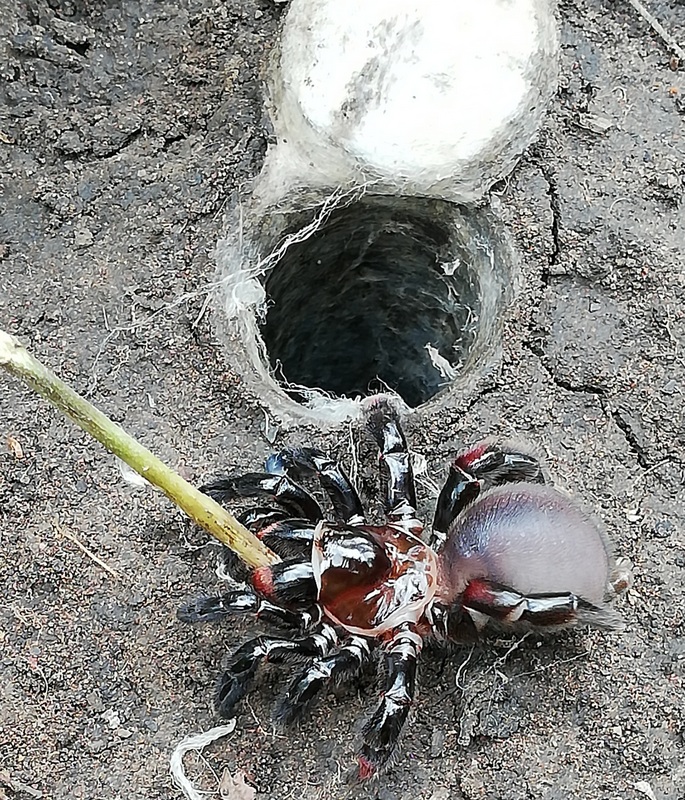 A Trapdoor spider. A species of arachnid that I have never seen before. If it was not for the well-trained eye of our guide we would have walked right past its burrow. 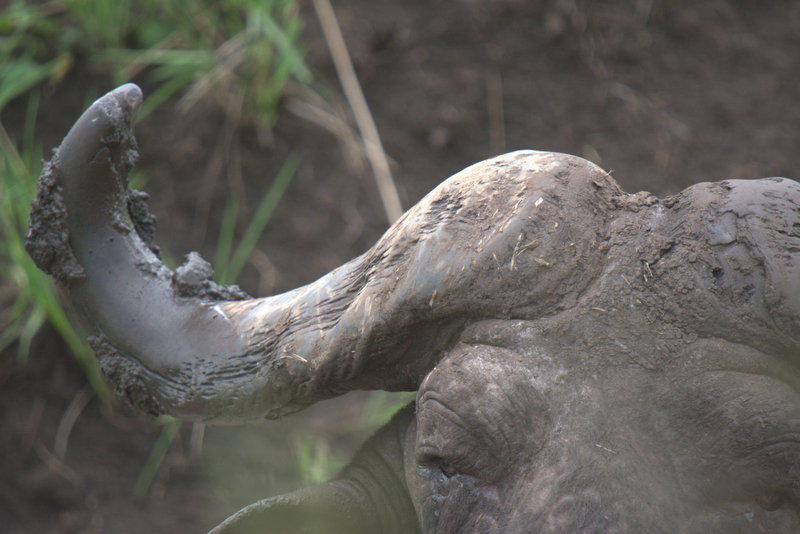 The Buffalo is often one of the more difficult iconic species to find when out either on foot or on a drive. Notoriously bad-tempered, they will charge often for no reason. More importantly, they always look at you as if you owe them money. 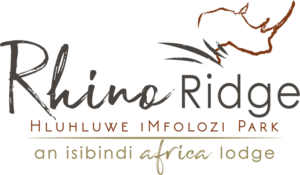 To find out what the Lodge is currently offering, visit their website for current specials and prices.

A is for Aardvark, road trip game

Goodbye and good riddance? A final hoorah to 2020.

Back on dry land we explore Newtown, Sydney

On the prowl with a Cheetah family. Black Rhino Game Lodge.

Wildlife from a forgotten vault.

Lion around…sightings during an Extraordinary visit.