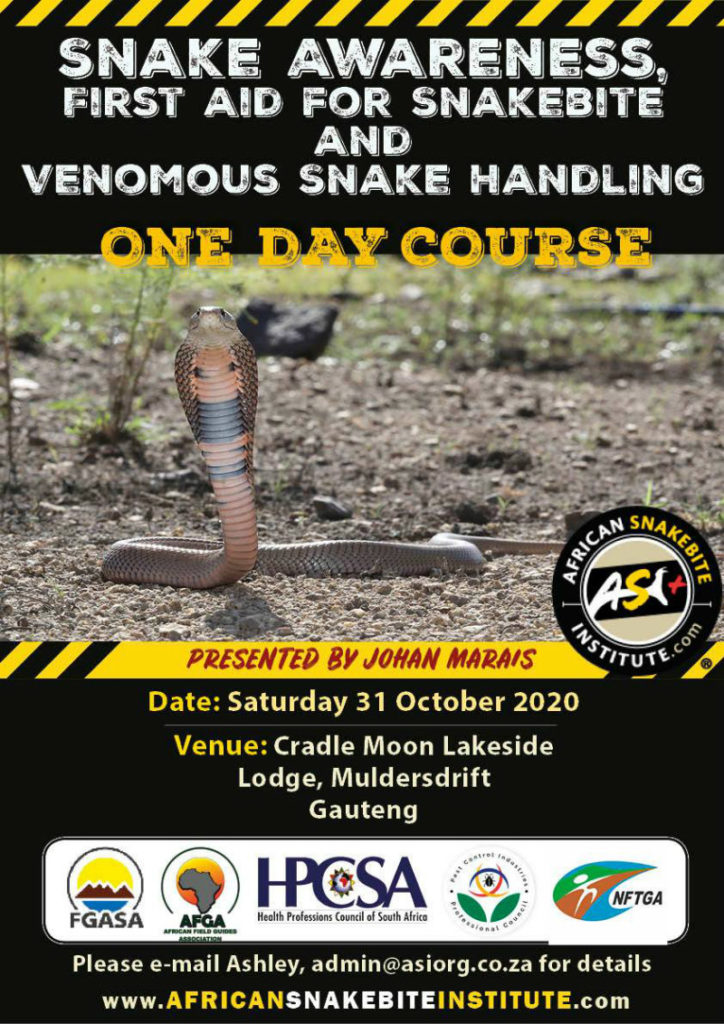 If you ask 10 people what they fear most, 8 will probably answer “SNAKES”. It was for that reason that I ventured out to Muldersdrift recently to take part in this course to allay my fears of all things slithery. And thanks to Johan Marais and his well-trained team, I returned home with a new respect for these reptiles that have had such bad press for so many centuries. 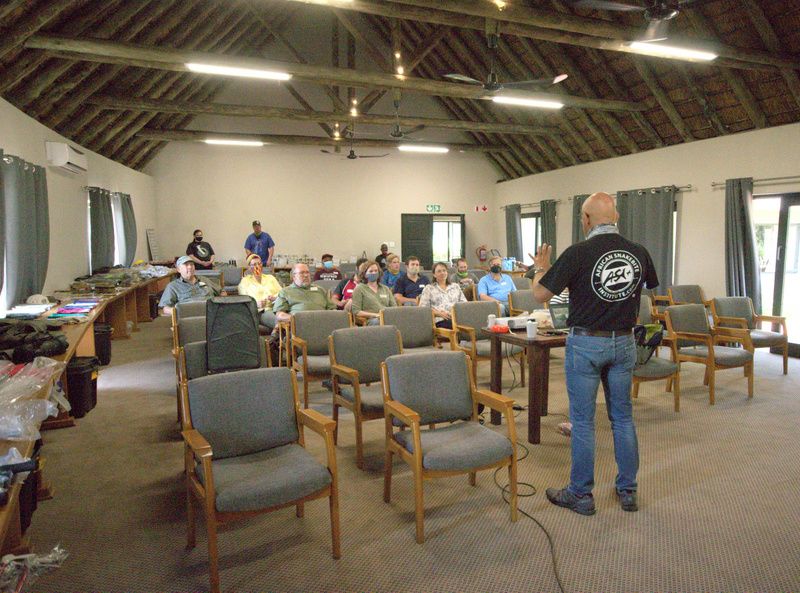 Given the current COVID-19 regulations, the lecture was attended by a limited number of people from various walks of life. All keen to learn, not only about snakes but scorpions, spiders, bees and wasps as well. Not the place to be if you had a phobia about any of those, although the only live exhibit, aside from the snakes, was a rather large scorpion in a container on the presenter’s desk…and that was only brought out to show how it glowed under black light conditions. 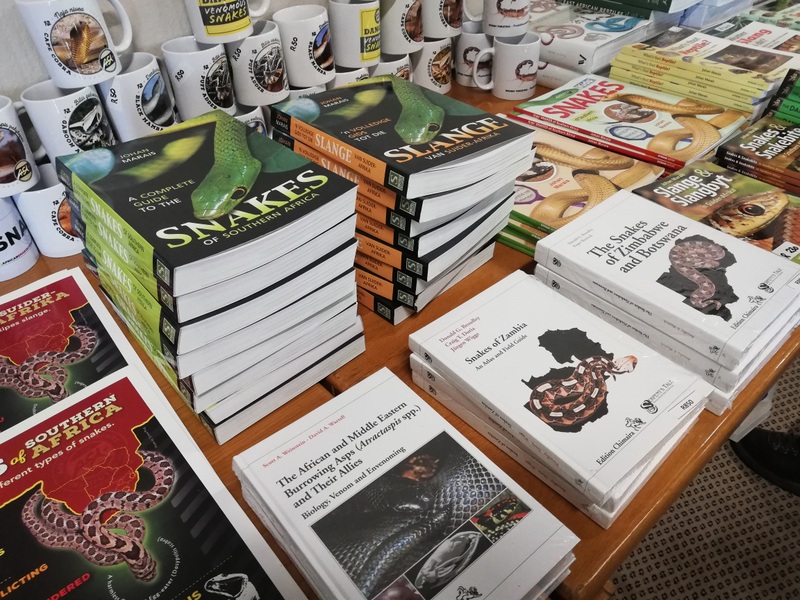 LOTS of books and a variety of merchandise was on sale and the participants certainly took advantage of what was on offer. The books were especially popular. I could have kicked myself as I have a copy of “Snakes of Southern Africa” and I forgot to bring it along for Johan to autograph. 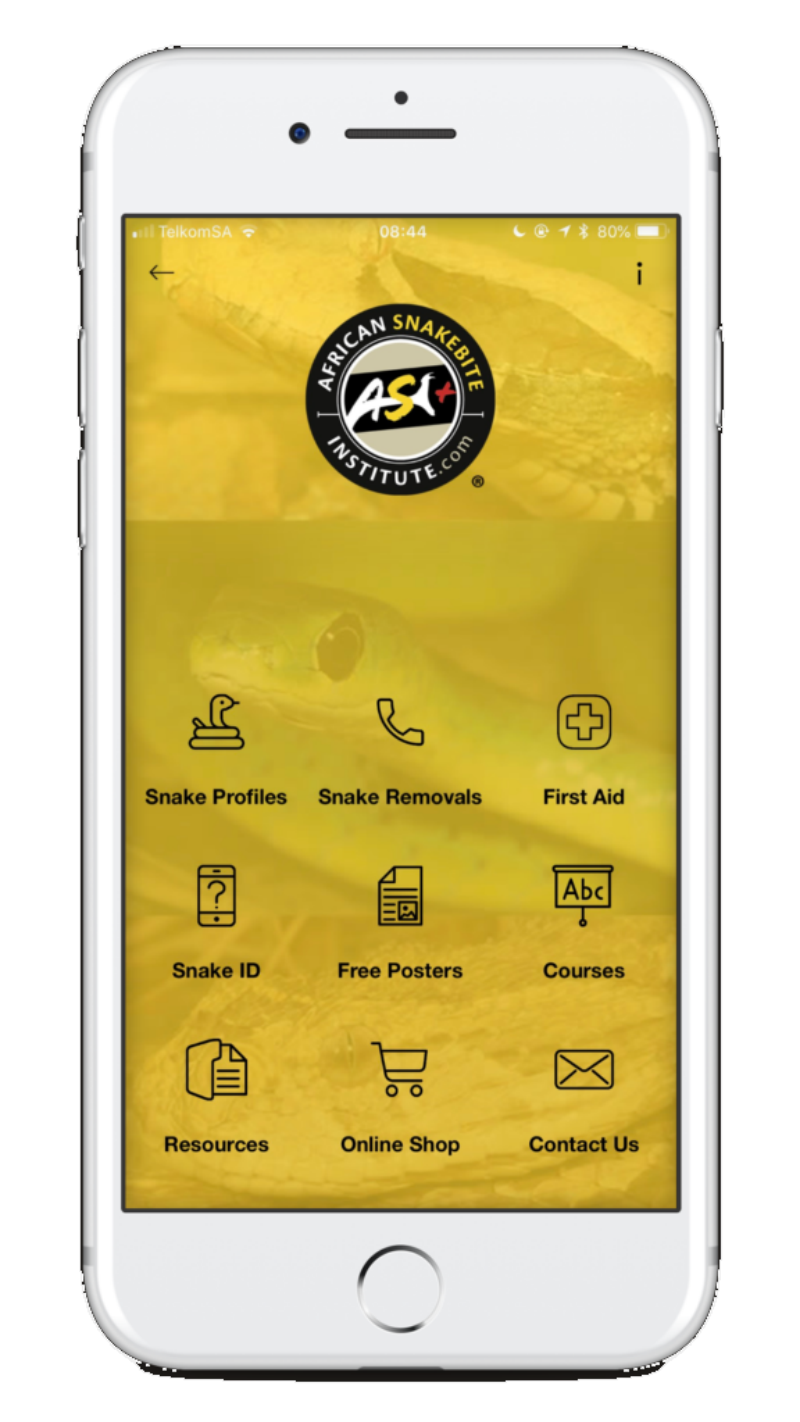 One of the best items not on sale? Tha ASI app, which you can download FOR FREE! A must for anyone who might interact with reptiles and need assistance with identification, relocation or medical attention. A well laid out app that is easy to use and contains pertinent information that is updated on a regular basis. Available for both Apple and Android phones. 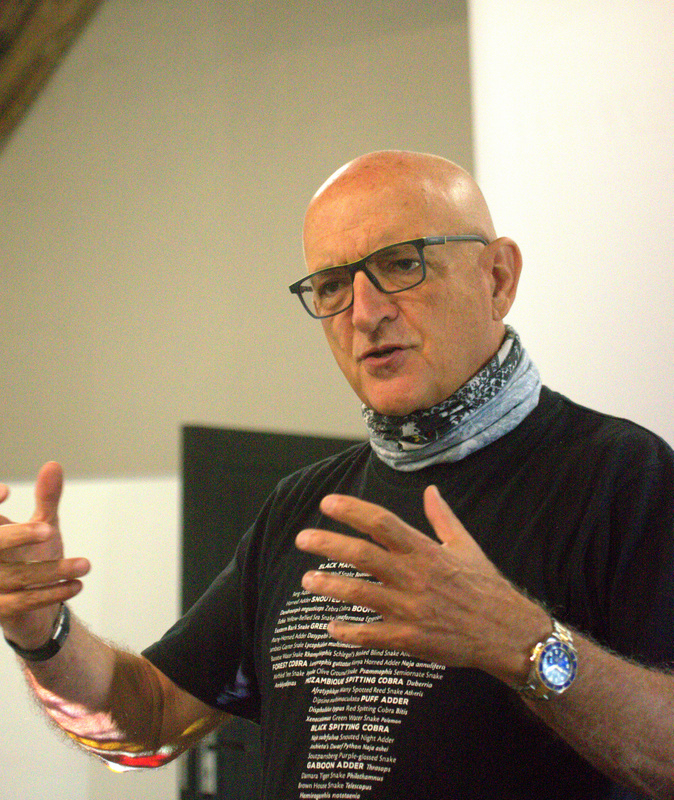 Johan Marais in full flight. He had a LOT of information to share with the group and he did so in an educational and entertaining manner. If you are from Brakpan to a Blue Bulls supporter, be prepared to defend your town and your rugby team! However, all done in fun and with no malice intended. The morning was spent in the boardroom on the theoretical aspect of the day’s proceedings. The course is informative, educational and, given Johan’s sense of humour, entertaining. From first aid to stings and bites were covered extensively and there was even a short test at the end to see if we had been paying attention (I got 78%, which I was rather chuffed about) 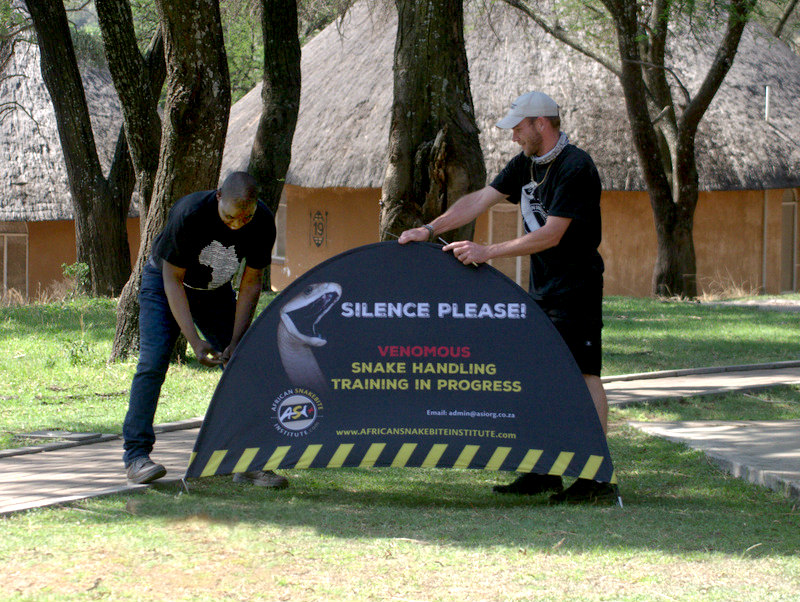 After a delicious light lunch, we knew that the active part of the day was about to occur when we saw staff putting up this sign… 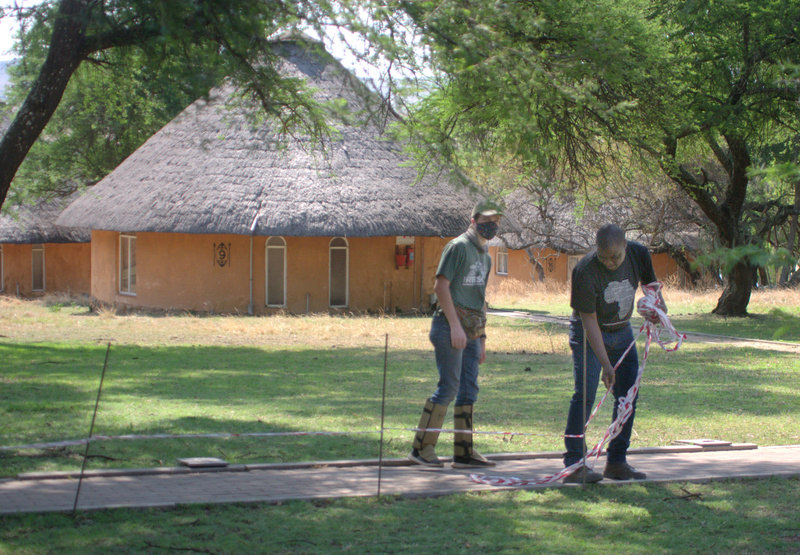 And roping off the area with hazard tape to make certain that the day-visitors on the property did not wander into the demonstration by accident. It always amazes me how quickly people gather to gawp at things they are not really involved in. And, of course, to take the required selfie with a snake in the background. 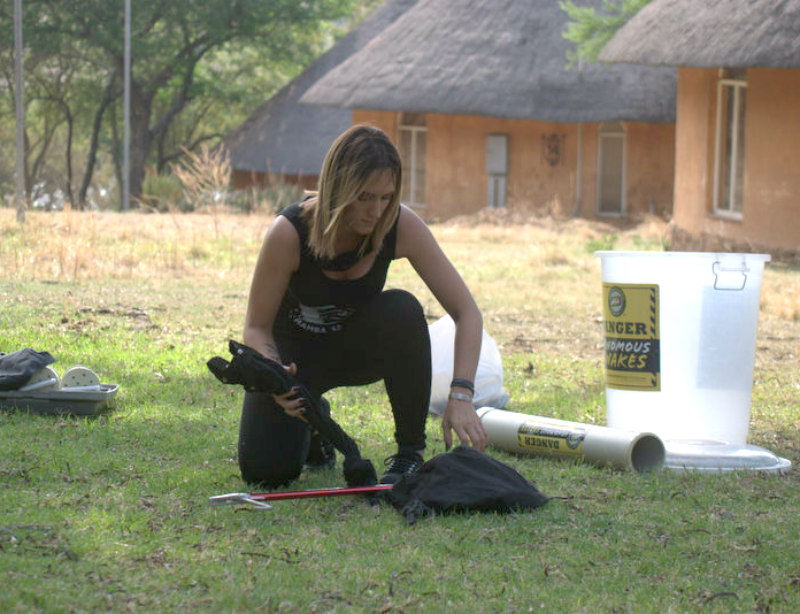 It runs in the family. This is Johan’s fiancee, Bianca, showing how to handle a snake in a bag correctly. Snakes can bite through a bag if given the opportunity, hence they need to be handled with caution. The tongs were placed across the bag while the knot was being undone, thus making certain that the sharp end of the snake was nowhere near hands and fingers. 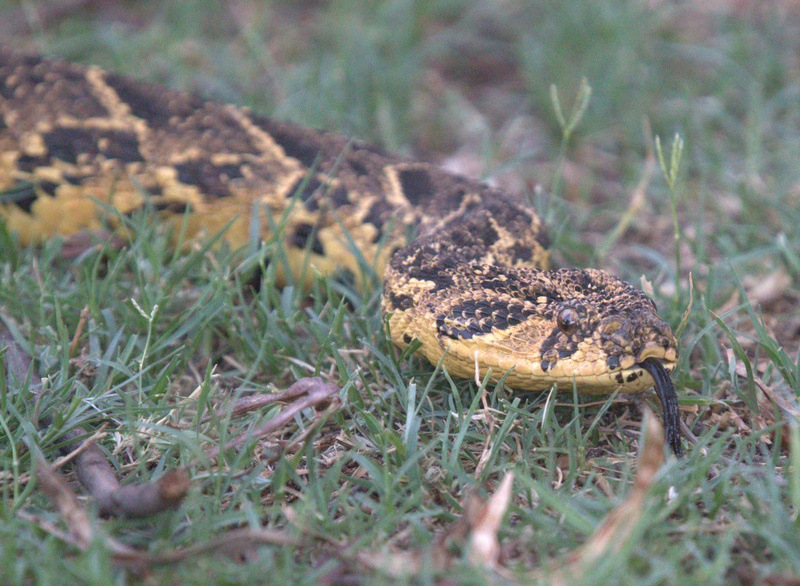 The Puff Adder is responsible for many of the bites in South Africa. It is a lazy, well-camouflaged snake that is often stepped on, hence most of the reported bites occur on the ankle of the victims. 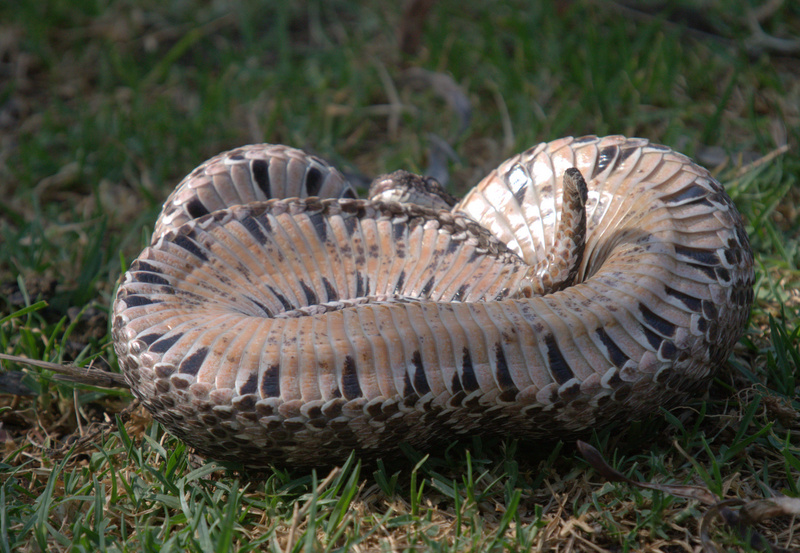 Playing dead… many snake species will play dead in order for you to leave them alone. And the Puff Adder is one of those. But do not be lulled into a false sense of security, as they can ‘resurrect’ themselves almost instantaneously if they feel under threat and then they will strike. 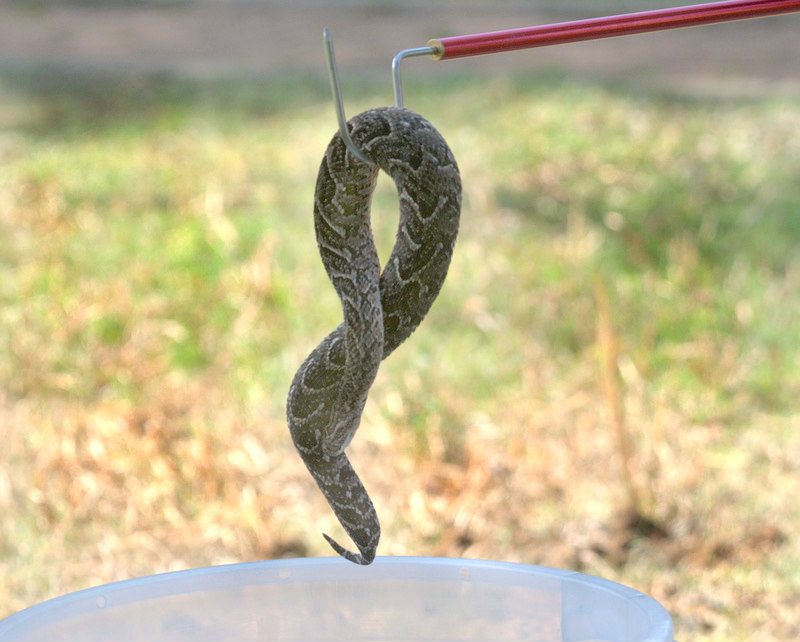 Two methods of handling the snakes were taught on the day. The first being the correct use of a snake hook. Both Johan and Bianca went to great lengths to explain that snakes should not be hurt when handled and the signs, if they are stressed, are easily noticed. Once hanging from the hook, this particular Puff Adder was relaxed and was able to be picked up gently… 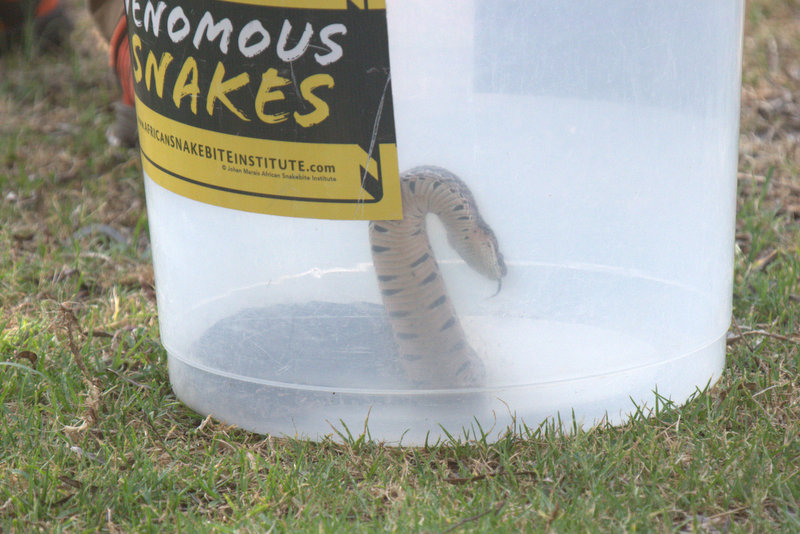 And placed in a bucket. A see-through container makes it easier for the snake-capturer to see where the reptile is at all times so that there are no surprises when release time happens. Round containers are preferred as square or rectangular ones offer corners that the snake can utilize to escape. 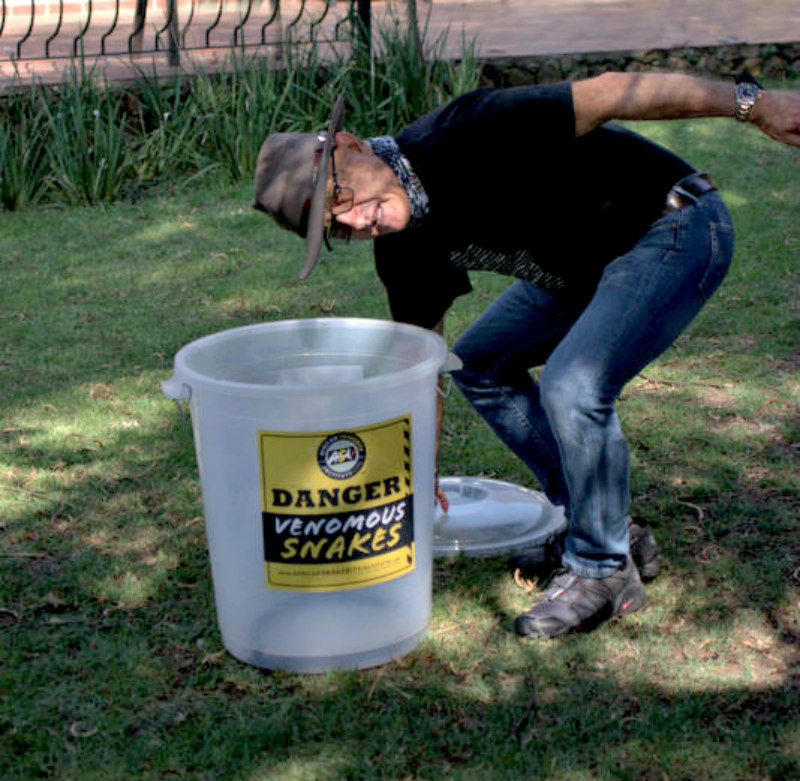 This is how NOT to do it…You don’t want your face THAT close to a container. BTW, what looks like a snake at the bottom of the receptacle, is actually a piece of rope that is used to teach participants how to handle the real deal, when their turn comes. 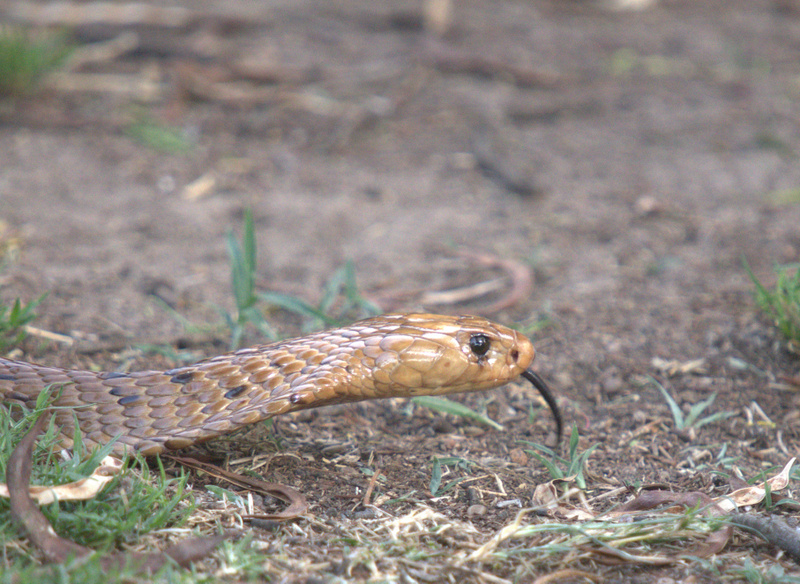 The participants were split into two teams, both of which dealt with the same three species. A Puff Adder, Snouted Cobra(formerly known as the Egyptian Cobra) and the Rinkhals. To lessen the stress on the snakes, each team had their own species representatives. 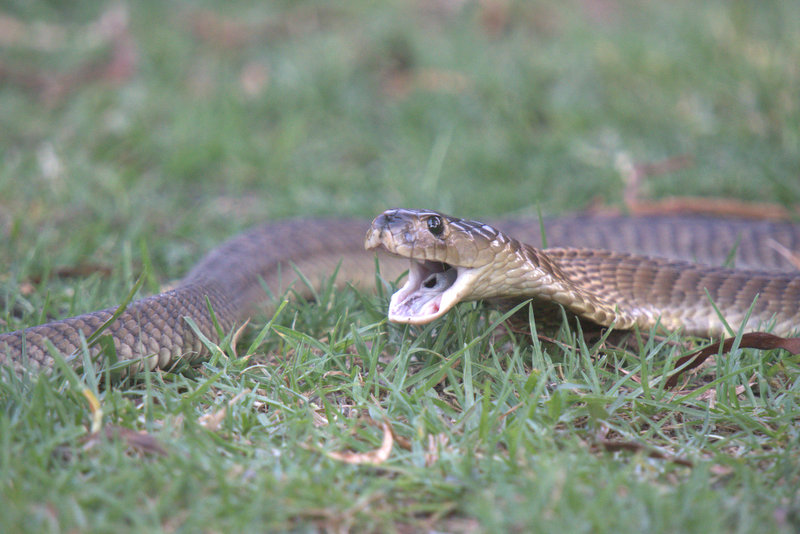 Don’t get me angry, the Snouted Cobra making its feelings known. There are two important facts that you need to know about a snake. It has a sharp end and a blunt end. If at all possible, touch NEITHER end unless qualified to do so. But if you NEED to touch one, then make certain that it is the BLUNT end. 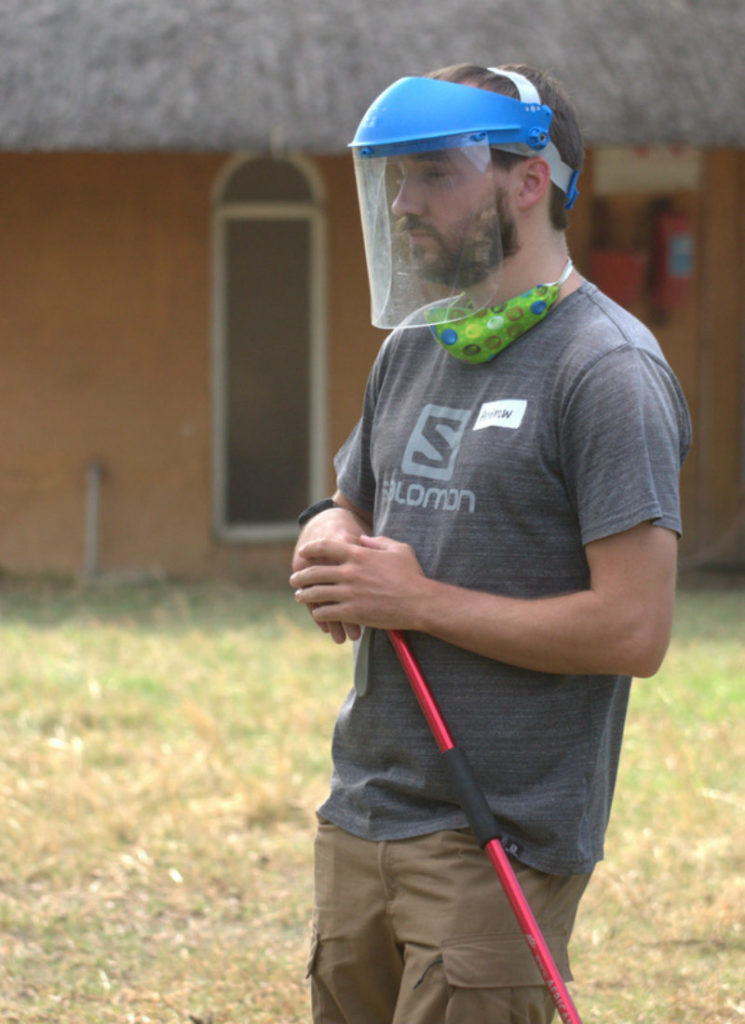 For a Rinkhals, you have to make certain that you are wearing the correct protection, as this is one of the species that can spit its venom at you…and with extreme accuracy. 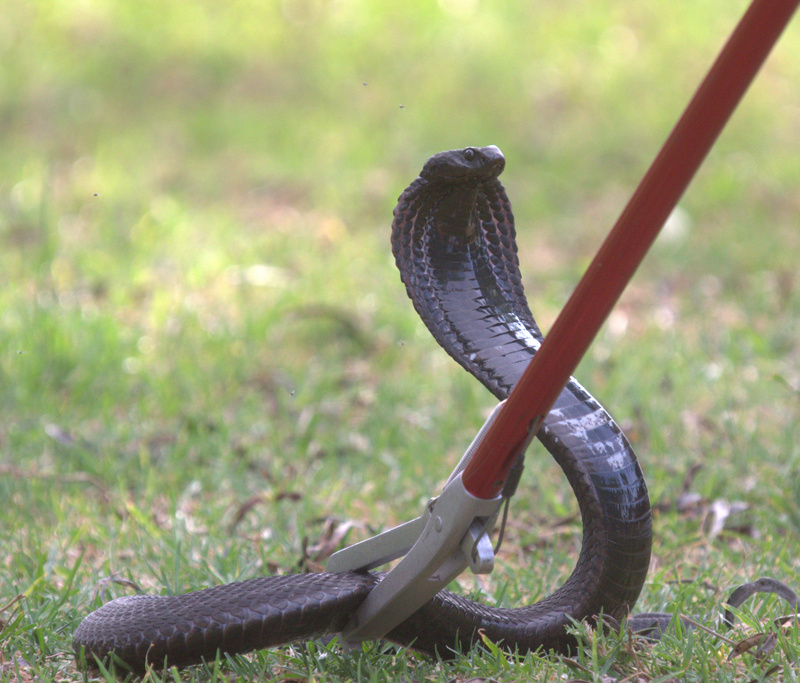 For me, this was probably the most impressive of the species that was handled on the day. It was easier to control using the tongs, although tongs can be used on any species. But the object is to control and contain, not to squeeze the snake into submission. 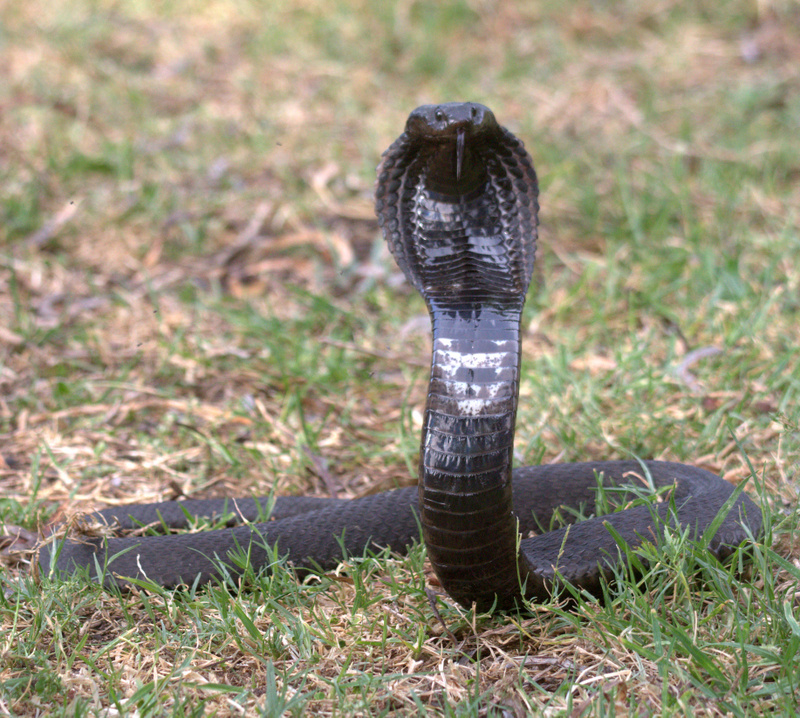 Staring into the dark, unblinking eyes of what some would see as pure evil. I on the other hand saw it for its beauty and for the role it plays within the various ecosystems in which the species is found. Treated with respect, they will not attack a human unless provoked. The course teaches that no snake deserves to be killed just because we are afraid of it. Knowledge is a very powerful tool and if you understand the species, you will know how to deal with it in a manner that leaves you unharmed, and the snake alive and capable of being relocated to a safe area. 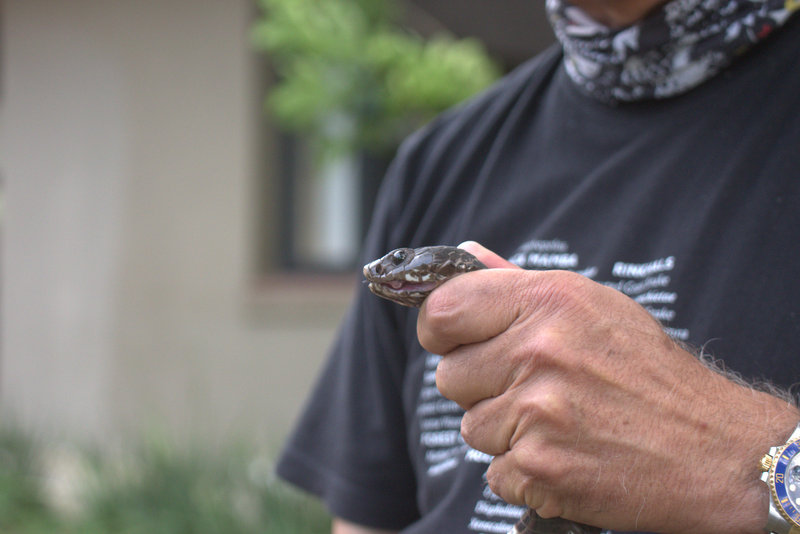 This is called ‘necking’, but NOT what we used to do as teenagers! DO NOT TRY THIS AT HOME OR UNSUPERVISED IF YOU ARE NOT USED TO HANDLING VENOMOUS SNAKES. 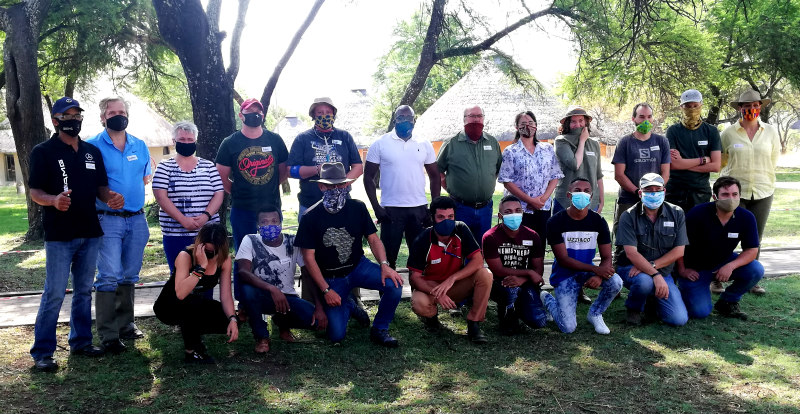 The course participants, all suitably masked for COVID-19 protection. From newly qualified doctors to field guides, farm owners and potential snake catchers, each had a story as to why they were attending a course. Even a hunter who admitted to shooting a snake was made to feel welcome and was not judged for his past deed. I would hope that he left the course with a new understanding for these creatures and will, in future, relocate instead of kill. 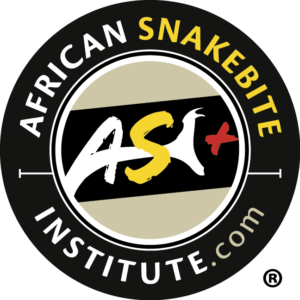 To find out more about what the organization offers, click on the logo above. 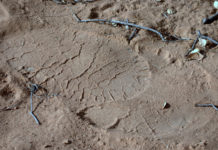 An overview of our Celebrity Reflection cruise. Part 1

Is it a rock? No, its Hippo on the Chobe River

Snakes on a plain…

I spend the night at the Grey’s Inn in Machadodorp, Mpumalanga...