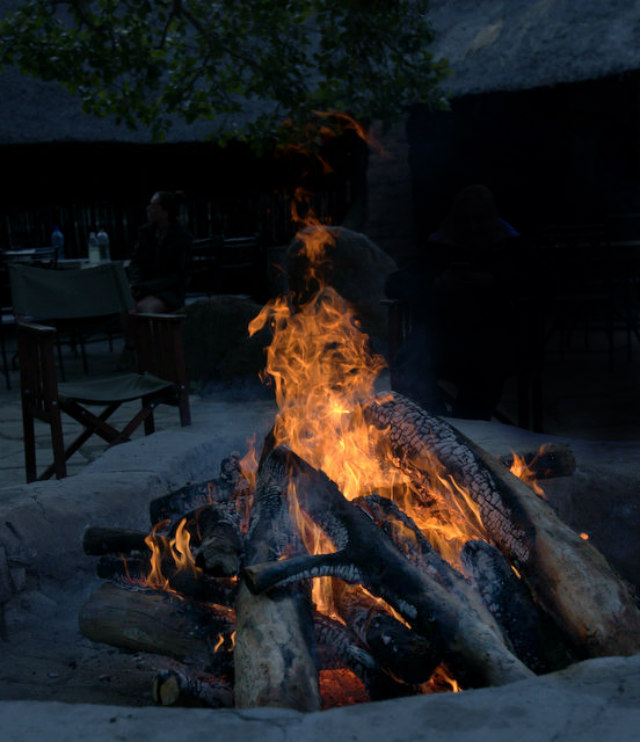 This is usually where all great stories start, in the glow of roaring firelight, also known as ‘bushveld TV’. After a hard day of eating, sleeping and exciting game drives, there is no better way to unwind and share experiences. Together with good company and a beverage or two, it is here where friendships are formed and the story-telling skills of the field guides are put to the test. A sort of baptism of fire if you will. What constitutes a good story? Well, obviously, it needs a beginning, a middle and an ending. Seeing it involves wildlife, it will also need an element of danger and surprise to bring the story to life.

FYI: Although all the animal images in this posting were seen on game drives while at Safari Plains, the stories come from a variety of my experiences over may years of spending time in the bush. 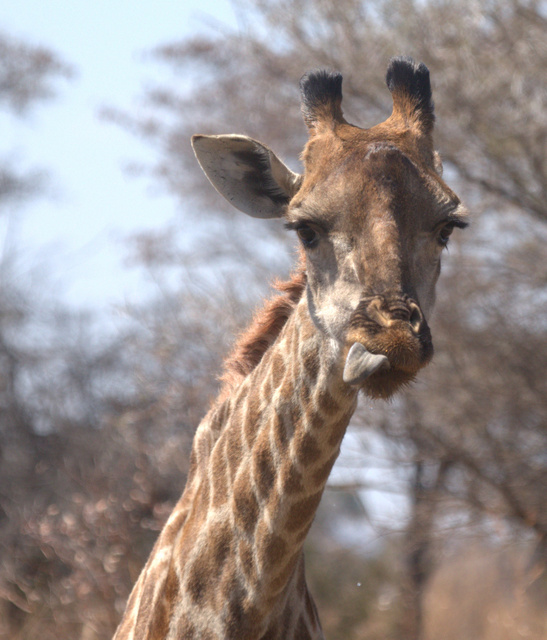 “This is what I think of wild-life photographers” is what this giraffe seems to be conveying. At a particular reserve some years ago, I discovered that giraffe can kick sideways and not just backwards as I had believed for many years. The giraffe in question had lived in this reserve for all of its life and was used to interactions with guests either for photographs or for food. However, being a wild animal, it had a dark side and on that particular day, I was almost on the receiving end of what could have been a deadly sideways kick. I had approached the giraffe from behind and as it had not kicked out at me when I approached, I believed that I was safe. But, walking around the side, a foot shot out and just grazed my left leg. Not what I was expecting at all. That incident could have ended badly for me had I not trusted my instincts and taken a wider berth around the giraffe than I usually did! 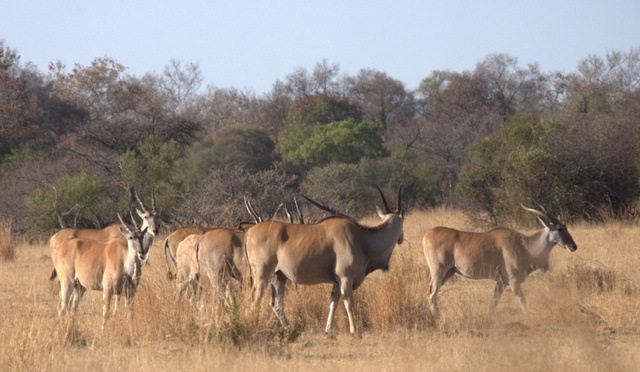 The largest of the African antelope, the Eland, despite weighing up to 980kg, is able to leap a 2.5m fence from a standing start if startled. The San hold these in very high esteem and hunting them has its own rituals. Several years ago a friend bought several eland, at great expense, to stock his farm in the Waterberg. I went up to watch the exciting event as I had not witnessed a game release before. The truck and trailer arrived and we could all hear the impatient stamping of the eland ensconced inside. With the vehicle positioned correctly and all of us safely out of the way, it was time to open the doors. The eland came out at a run, spied the 2m perimeter fence in front of them and leapt over it effortlessly. They disappeared, never to be seen again. They had been on my friend’s farm for all of 2 minutes. An expensive lesson… learned. 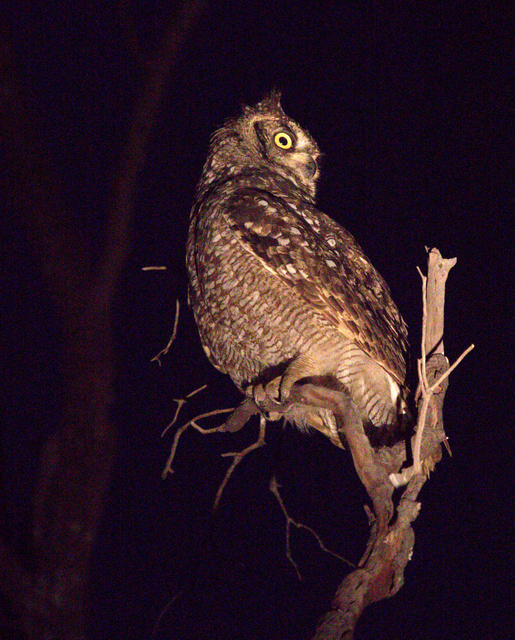 Although owls are seen as a harbinger of death in some cultures, a Giant Spotted Eagle Owl is always an exciting find on a night drive. I have actually found one sitting in the road outside my house in the middle of a Johannesburg suburb. 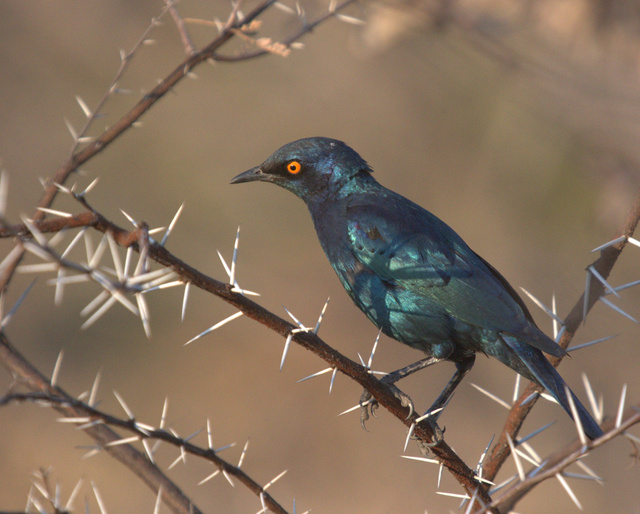 One of the most easily identifiable bird species…the Glossy Starling. Back in the Eastern Cape, where I grew up, these were seen as pests as they would nest in the roof and bring with them bird lice and other creepies that were not welcome. I spent a lot of my childhood trying to bird-proof our roof. Without much success, I might add. One of the most feared of the African reptiles, the Nile crocodile. These prehistoric monsters can grow up to 5m in length and weigh in between 220-550kg. At a game reserve some years ago, I was busy taking pictures of animals at a waterhole. I was so focussed on the action in front of me that it took me a while to look at my feet, only to find a young croc lying not too far from the tip of my boot. I am not certain who was the most surprised or who reacted the first. What I do know is that I was grateful that there was a fence between us. 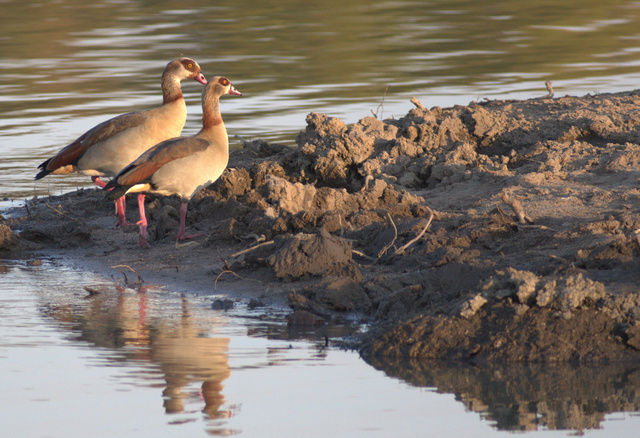 Although annoying and loud, the markings on Egyptian geese are stunning. While in a canoe on Emmerentia Dam in Johannesburg, I accidentally paddled between a female and her offspring. Their calls alerted the male who was on the bank close by and who immediately flew to their aid. He landed on my head and promptly took out his frustrations by pecking at my scalp. My only recourse was to roll my canoe and fallout, rather ignominiously. Birds 1- Paddler 0. 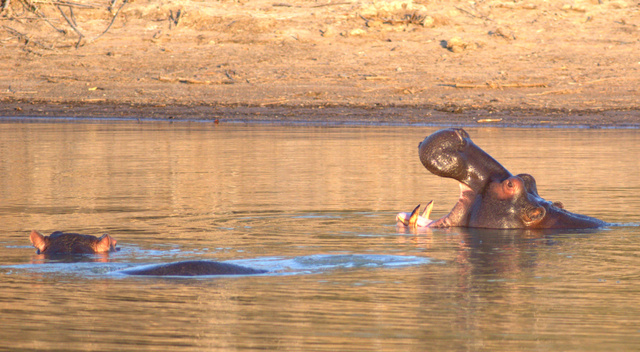 They may look large and cumbersome, but on land, a hippo can run at 30kph, despite its 1500kg bulk! Years ago, while on a trip to a lodge on the Zambezi, one of the activities on offer was a canoe up-river and a picnic lunch before returning to the lodge. As it was tow-man canoes and the river was very calm, I decided that it might be a good idea. A gentle start until we came upon a pod of hippo not too far from where we were paddling. While we could see the pod all was OK, But it was as they slipped under the water that things started to get interesting. We watched their bubbles heading in our direction until we decided that discretion was the better part of valour and we became Olympic paddlers in order to get to the safety of the far bank as quickly as possible. There was no interaction, however, we did see them surface in the area we had been in. And it made for a good story at lunchtime. 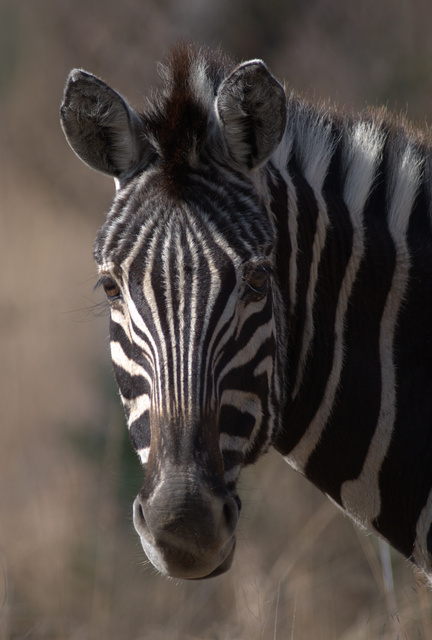 Black with white stripes or the other way round? New research shows the skin is actually black with the stripes being white. Zebra are NOT to be trifled with and a stallion can inflict life-threatening injuries with hoof and teeth. Many a zebra has lost a portion of or an entire tail to a rival when fighting for dominance and mating rights. 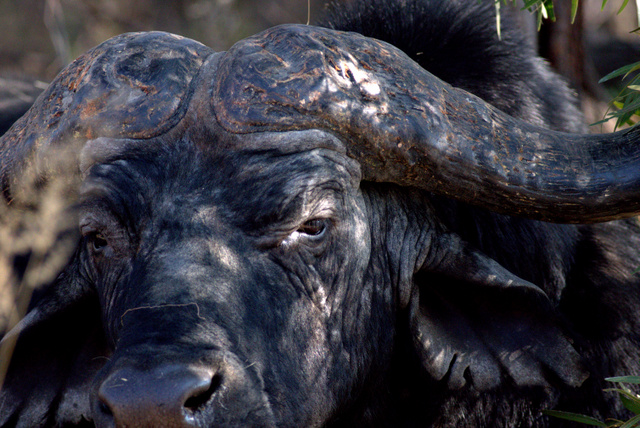 And what would a good fireside storytime be without some reference to the Big 5? Buffalo has the enviable reputation of being probably the animal most likely to attack for no apparent reason. While spending time at a lodge several years ago, my wife and I decided to accept an offer from one of the guides to go on a morning walk after breakfast. We were walking and chatting, not really concentrating on our surroundings ( in hindsight NOT the most sensible way to walk) when we almost stumbled into a herd of buffalo! Luckily we noticed them in time and were able to give them a wide berth without putting ourselves into immediate danger. An adrenaline-filled moment never the less as we were not certain as to how the buffalo would react. Luckily for us, the herd was more focussed on feeding than fighting with us. 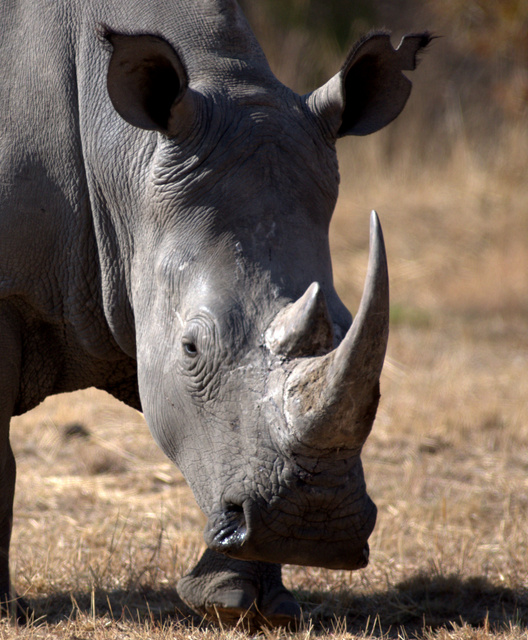 Some say that only the Black rhino is in the Big 5, but as far as I am concerned, both species qualify. Sometimes, as a photographer, I tend to put myself into a situation where getting the ‘shot’ is almost more important than personal safety. This incident took place with a rather bad-tempered Black rhino that a group of us on a tracking exercise literally walked into. The lead guide asked us to move onto a side path so that he had control of the situation, should things escalate. I chose, stupidly, to place myself halfway between my colleagues and the guide. There was a lot of shouting and I heard the guide cock his rifle…and it was at that point that I decided that for the safety of all, I should obey instructions and join the group. Luckily the story had a happy ending…for the rhino. I, on the other hand, learned humility and had to apologise to the guide for possibly placing lives in danger. 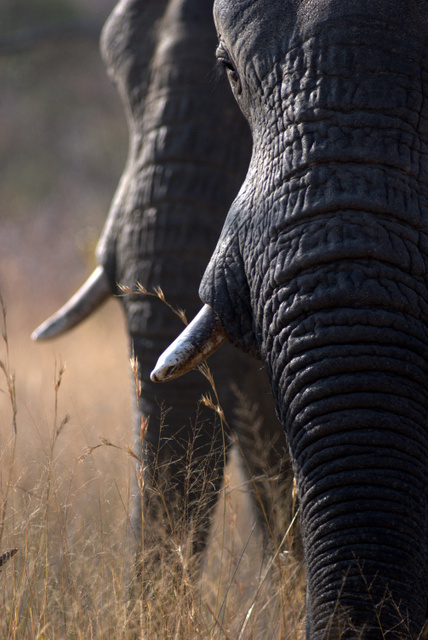 The heaviest land mammal, and despite their size, they are able to move with the stealth of a Ninja… About a year ago, I was producing content for a training organization and I had to spend some time at one of their more ‘rustic’ camps. Little did I know that my accommodation would be a two-man tent and that was it. Having been used to writing about 5-star lodges, I was somewhat taken aback when I was shown where I was going to be staying. However, I unpacked and settled in for the night. I was not aware that there was a herd of elephant that regularly wandered through the camp and that my tent was the first in line. I was rather rudely awoken in the middle of the night by the sound of an elephant feeding right outside my tent. That would not have bothered me be but for the fact that he was leaning on the guy ropes while doing so.  FYI: Elephants appear to be MUCH bigger when you are lying in a sleeping bag. 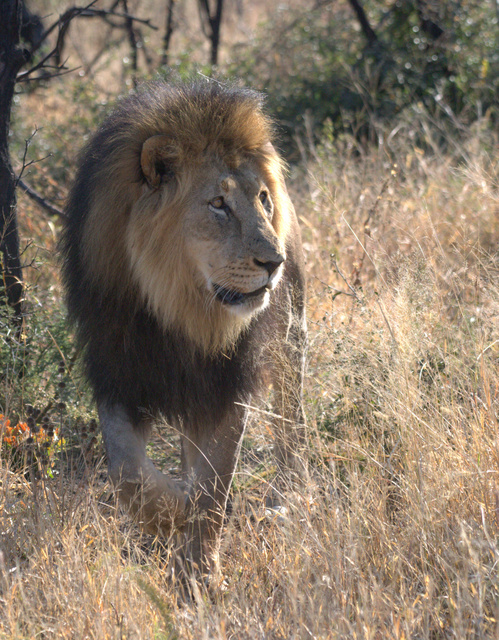 Interestingly, despite there being no real jungle in Africa, the lion is still referred to as the King of the Jungle. There is nothing that gets my adrenaline flowing faster than staring into the amber eyes of a majestic animal like this. While at another of the training establishment’s camps, the head guide decided that seeing it was a full moon, it was going to be a sleep-out night. No tents, just a thin foam mattress and a sleeping bag. As we all settled down, we heard the vocalization of a pair of lions in the far distance. As there seemed to be a long way off, none of us seemed too concerned, but that changed, when in the early hours of the morning, the vocalization seemed to be coming from a grove of trees right next to where we were sleeping. Luckily for us, the cats seemed to be on a mission to be elsewhere and they walked straight past 12 prone, figures, grunting and growling as they passed us by.

To find out what is currently on offer at Safari Plains, visit their website for all the information you need to make a reservation. Click on the logo to access their site.

Abu Dhabi through my lens

Our sojourn at the Premier EL ICC Hotel…a pleasant surprise!

Just when I thought it could get no worse…My Wednesday COVID-19...

Come out, come out wherever you are…our final game drive

Is prevention better than cure? The rhino wars