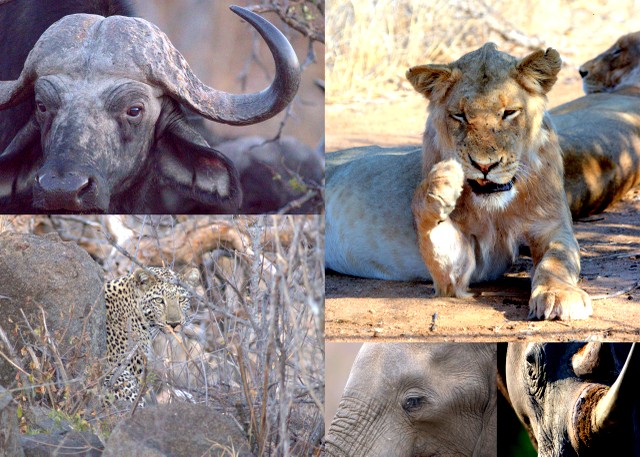 These are the Big 5 (lion, leopard, rhino, elephant and buffalo). Lodges are trying to move away from this archaic description as the ‘Big 5’ has a hunting connotation as the list describes the 5 most dangerous African animals to hunt on foot. Many forward-thinking lodges are referencing them as either dangerous game or iconic species. A much better way of accurately describing them. 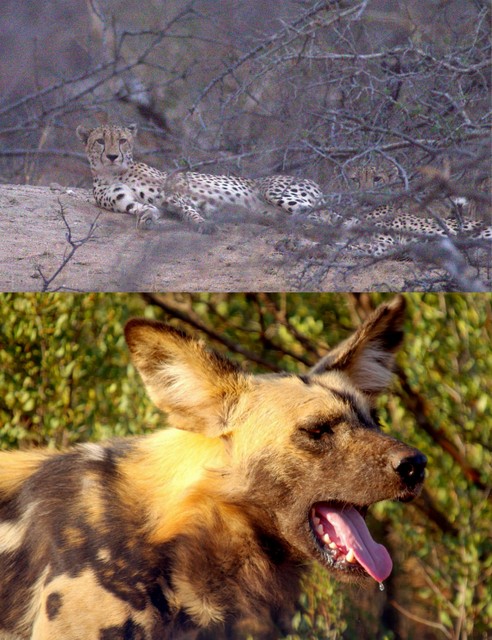 Seeing that many of South African Reserves have both cheetah and wild dog, they have been added as an addendum to expand the Big5 to become the Magnificent 7. Neither of these species has been extensively hunted in the past. 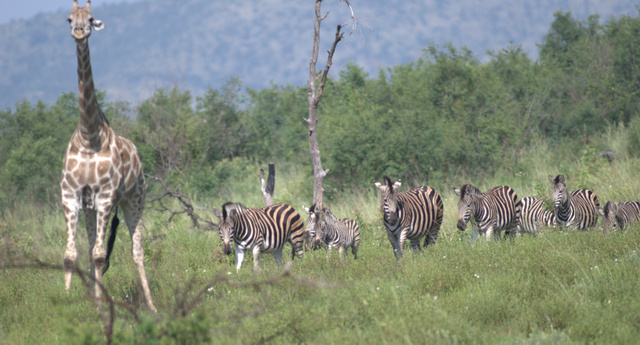 And then a mini-list for certain international visitors…zebra and giraffe that have become extremely popular with a certain demographic of international travellers. 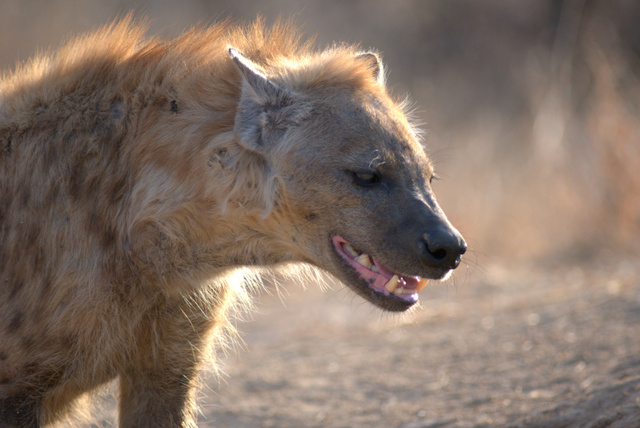 And then there is the Spotted Hyena…

The only list that it features on is the UGLY 5 (hyena, wildebeest, warthog, marabou stork and vulture) Personally, I feel that categorization is unfair and certainly disrespectful for many reasons. Firstly ugly birds should have their own list, but more specifically, how can you place prey species together with one of the apex predators of the African plains? It is almost as if the hyena deserves to be on a list of its own! On one particular afternoon drive while at Naledi Game Lodge, I got to spend time with members of a clan that is raising cubs at a den not too far from the lodge. In the glow of the fading afternoon sunlight, I watched enthralled as jaws that can rip flesh and crush bone, played gently with offspring. That being said, they are feared for many reasons. Writer Earnest Hemmingway had this to say about them “…a hermaphroditic self-eating devourer of the dead, trailer of calving cows, ham-stringer, potential biter-off of your face at night while you slept.” 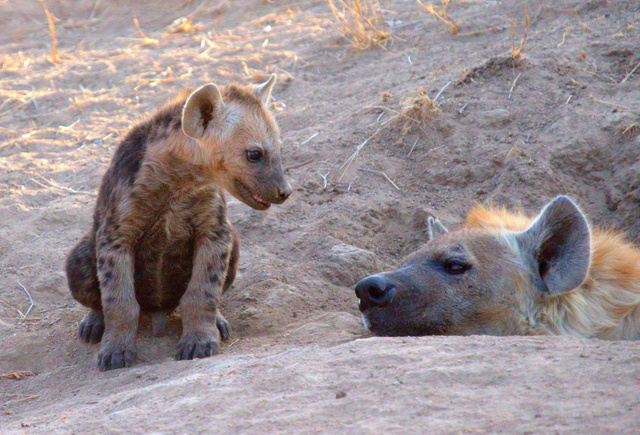 “Please come and play”? The eternal cry of all youngsters, both human and animal. And the look on the face of the adult speaks for all parents.  Hyena cubs, like all young animals, wild or domestic, are curious and inquisitive. I have been at a hyena den where the cubs have started chewing the metal running boards of the vehicle while the adults have looked on with ‘pride’. 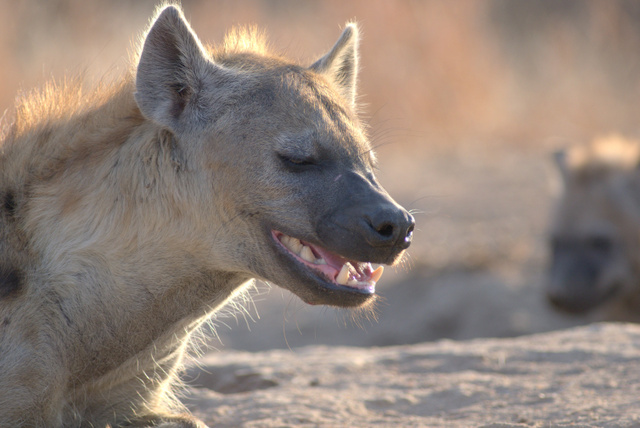 Why is it that we seem to be so repulsed by them as a species? In some African folk-lore tales they are mentioned as pets of witch doctors, their sexuality has been a cause of concern for those scientists who have done research on the reproductive cycle of the species. They have been ‘accused’ of being hermaphrodites or even possibly being able to change their gender With the clan being run by a matriarch, all the males are smaller that and subservient to her and the other clan females, which has given rise to some of the gender confusion. 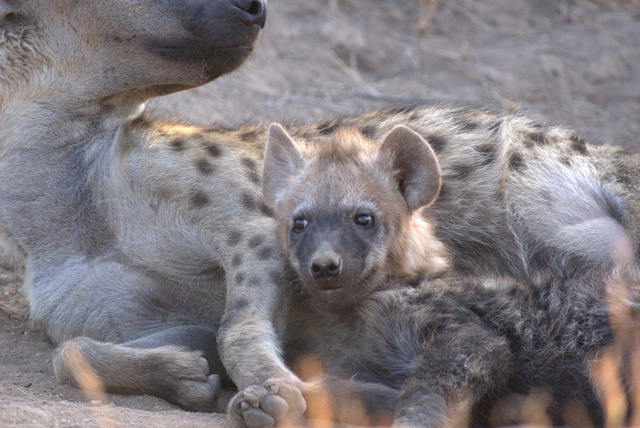 If you were confused about the sexuality at all, then the birth process will really have you scratching your head. The females give birth through their pseudo-penis and as a result of this painful and complex birthing, up to 60% of the cubs suffocate during the process. Those that survive are born with their eyes open, unlike their cousins, the striped and brown hyena. Youngsters can suckle for up to 18 months but will start to eat scraps of meat around the den site from as early as 5 months. Mothers have only 2 nipples and, if they give birth to more than two cubs, the new-born will have to fight to survive, with the weakest will succumbing to starvation. 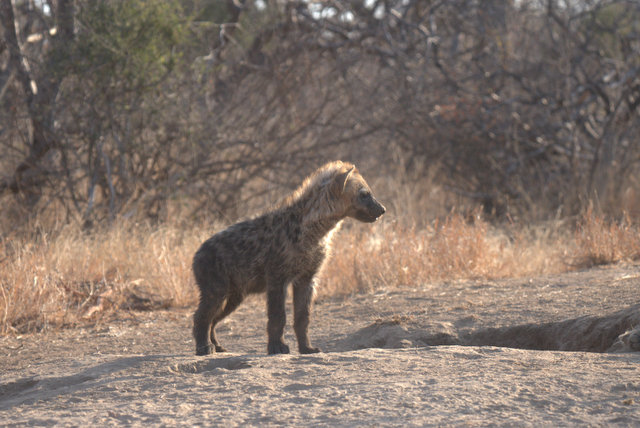 No matter what size they are, there can be NO confusion as to what animal this is based on the slope of its back. There is nothing else that comes close to looking like this in profile. 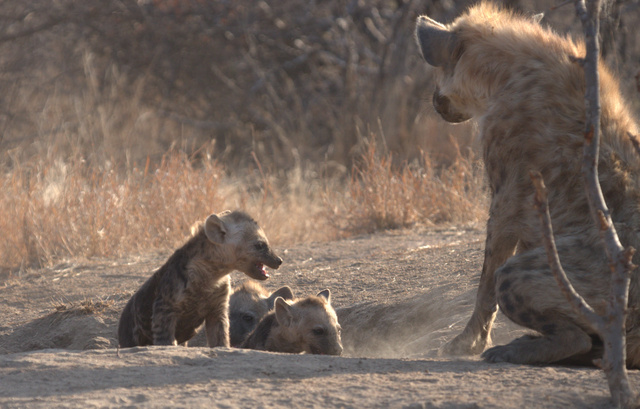 With three cubs (that we could see) this is not a busy den. Clans can be up to 100 strong and are ruled by the Alpha female and her oldest female offspring. 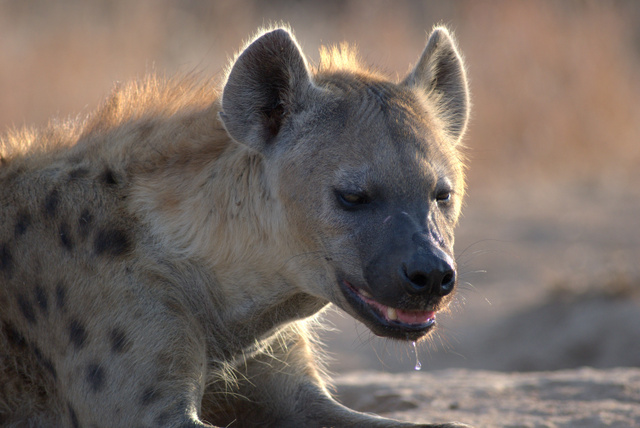 Drooling at the thought of a potential meal? This particular animal seemed to be salivating or drooling in excessive amounts, yet there was no food to be seen. Although it might look like a dog, the species is more aligned to felines and they are members of the suborder Feliformia, which is a classification for cat-like carnivores. 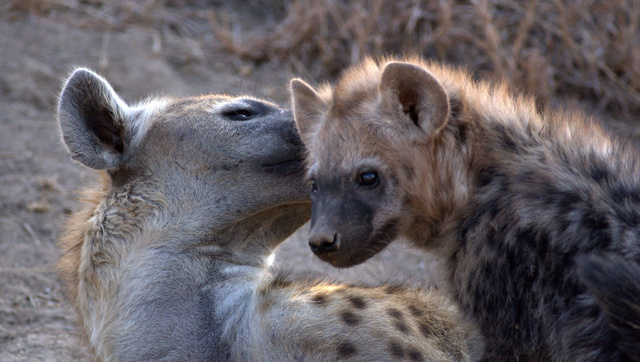 The love between adult and offspring is undeniable, and unlike lions where their cubs come under a lot of threat from pride adults, here, at this particular den site anyway, it was all love and quiet. 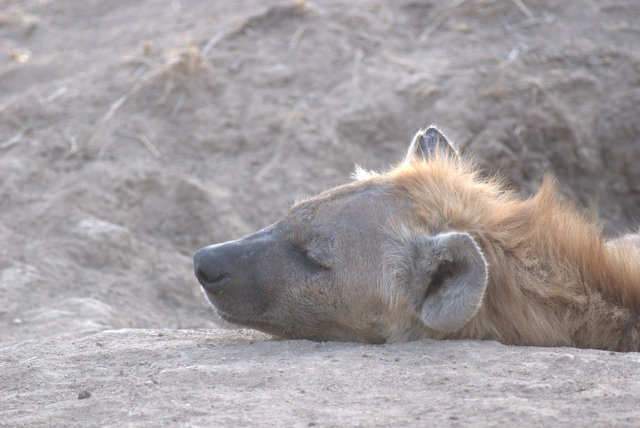 By lying in the den opening, this adult was protecting her rear end and keeping cool at the same time. Although they are perceived as scavengers, hyena will kill for themselves and they have an impressive rate when it comes to successful hunts. Hyena are capable of running at up to 60kph and are therefore able to keep up with most predators if they are trying to scavenge a kill. I have been with a pack of 25 wild dogs that was on a hunt and they were followed by 5 hyena who stole the kill the moment that the dogs were successful. 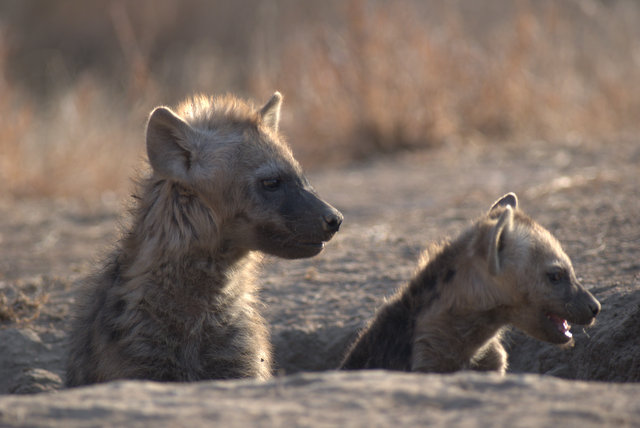 These two were very focussed on a clump of tall grass that was off to the side of the den. The reason why would soon become apparent… 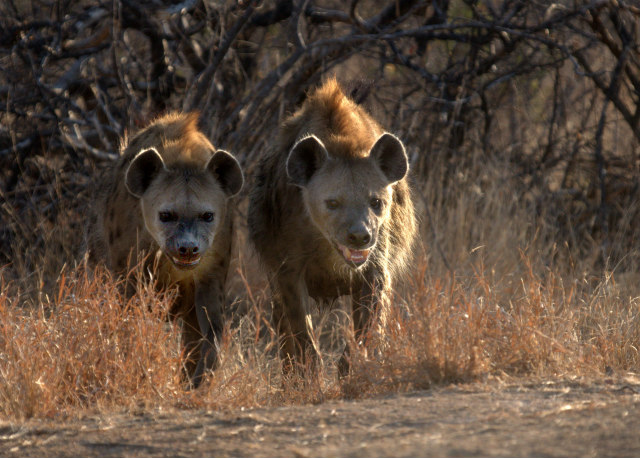 Out of the tall grass sloped this duo. Thanks to Disney’s The Lion King, the Spotted Hyena (aka the Laughing Hyena) has gained notoriety for both right and wrong reasons. Who can forget the trio of Shenzi, Banzai and crazy Ed? 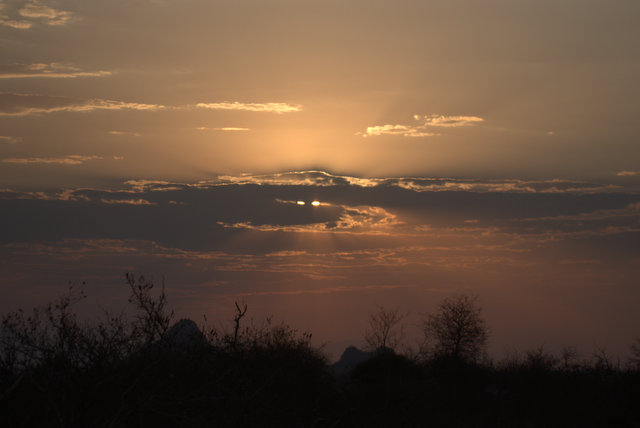 This is their favourite time, twilight…being crepuscular, they are most active in twilight, however, they can be active during daylight as well. Is there a correlation between the fading of the light and the increase in the ‘whooping’ of the clan as it heads out looking for a meal? Their vocalization joins the mighty roar of the lions that adds to the overall iconic sounds of the African night… 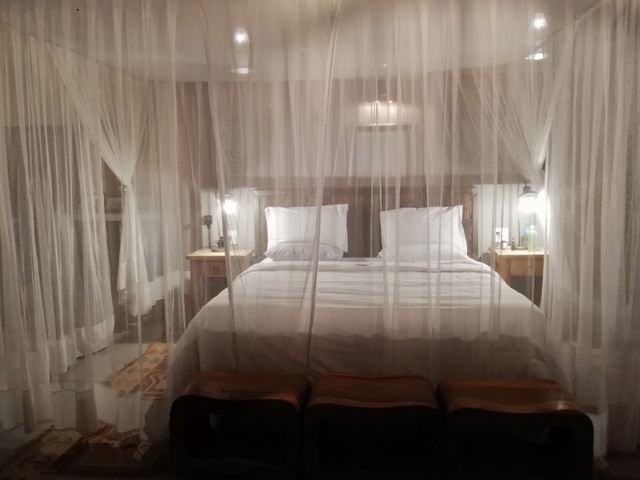 I fell asleep that night thinking about all that I had learned about this much-maligned creature and I came to the realization that without them, our reserves would be littered with uneaten carcasses that could bring disease and death to local populations. For me, bush visits are to expand my knowledge and to be entertained and informed at the same time. And it certainly was the case during my time at this spectacular lodge. I drifted off to sleep as the distant “Whoop” of the hyena added another layer to sounds of the warm African night.

A cultural experience in my home province

Cake decorating on board the Voyager of the Seas