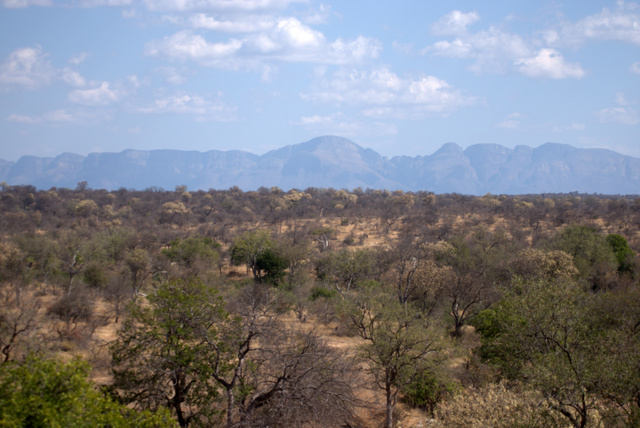 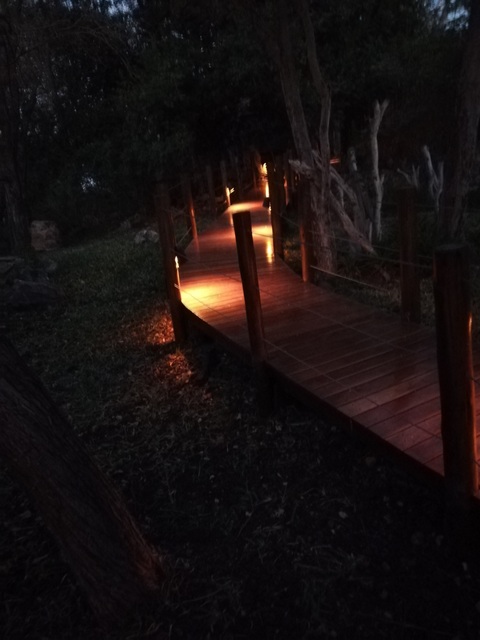 Early morning.Time to leave the warmth of Rock Fig suite and make my way along this path to the game viewing vehicle waiting at reception. However, in true safari tradition, coffee and a rusk need to be enjoyed first. Not one to mess with tradition, I stopped off at the main lounge for a quick cuppa before we set off. 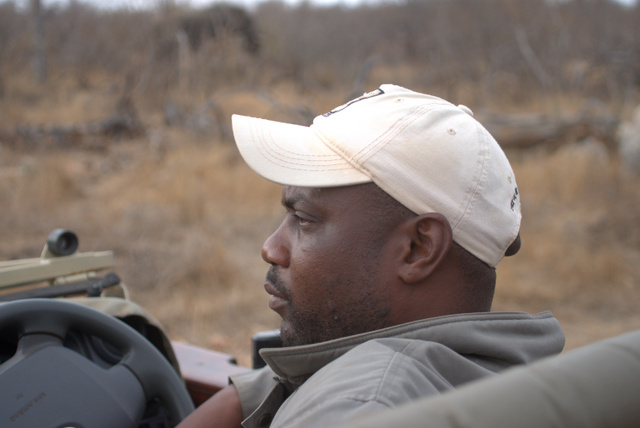 Vuyani in a pensive mood? Until the first sighting occurs, the pressure is often on the guides to ‘produce’ impressive animals from minute one of any given drive. Personally, I go to the bush with no expectations, although Pangolin and Aardvark had been on my “Most Wanted” list for 53 years. (I found my pangolin in November 2019 and the aardvark in June 2020) And the pressure is now off both me and future field guides that I might spend time on a vehicle with. I can understand that international guests might have expectations as their trip could be a once in a lifetime event, but for locals, a bush holiday or a trip to a reserve does not usually require a passport and a long plane ride. 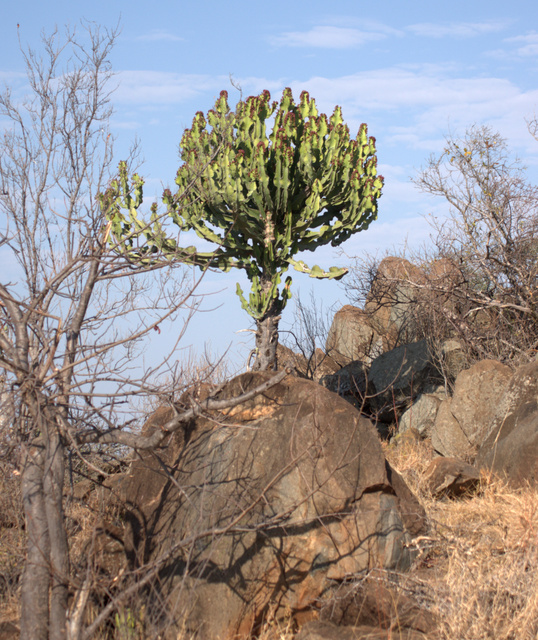 Euphorbia…also known as the Makweti Tree. Being in the bush is not always about the wildlife and there are times when a drive might not produce a constant stream of fauna to stun and amaze guests on the vehicle. Use that opportunity to look around and perhaps ask questions about the unusual flora? You never know what you might learn.

Did you know? The wood of this tree can be used for fence posts and the latex that the tree produces is extremely toxic! The nectar from the flowers can be utilized to make honey, however, it can burn your throat and is therefore NOT recommended for human consumption. Now you know! 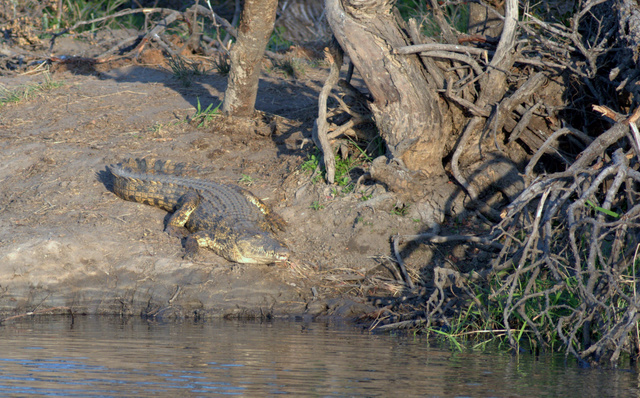 Basking on the fading afternoon sunlight, this Nile Crocodile as almost invisible. Given that they are cold-blooded, they need any available sunlight to keep their body temperature regulated.

According to African folklore, the crocodile once had a shiny smooth skin that it was extremely proud of. All the animals would come from far and wide to look at and admire his stunning exterior. At first, the croc spent most of his time in the water, but he came to see himself superior to all the other animals and would come out of the water to bask in their admiration. But as his attitude changed, fewer animals came to look at his smooth golden skin, the harsh African sunlight soon transformed into the scaly, bumpy, ugly skin that it has today. He was so humiliated by his new look that he started to spend more time in the water with only his nose and eyes visible. And that, dear reader, is still true to this very day. 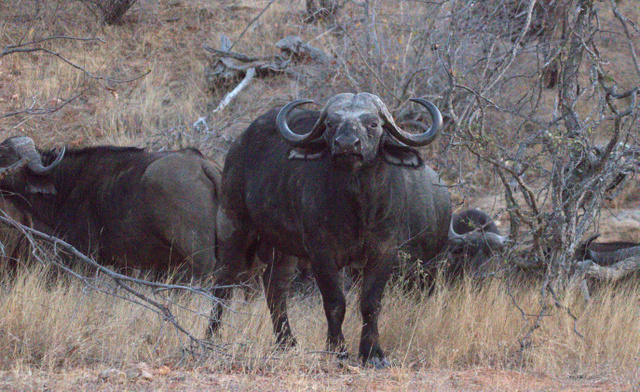 One of the continent’s most dangerous animals. The mighty buffalo is certainly one that you do NOT want to encounter while out on a walk. They have a habit of charging without provocation and often for reasons known only to themselves or the herd. They have been known to fend off attacks from lions and will fight predators even though severely wounded. Next time you are at a buffalo sighting, look carefully and you might notice that they all look at you as if you owe them money. 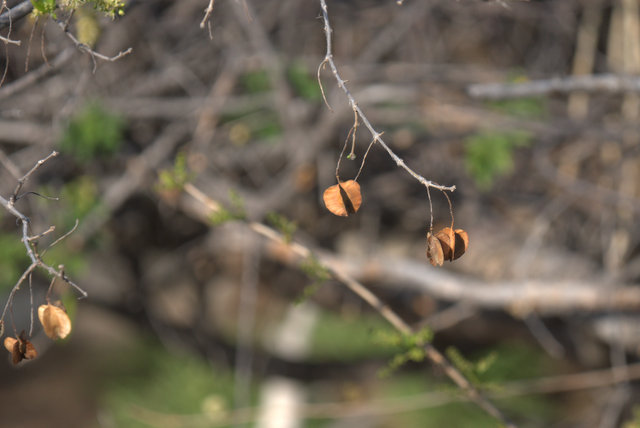 Seed pods might not be viewed as either dangerous or exciting. However, they have an important role to play in helping the various ecosystems grow and prosper. 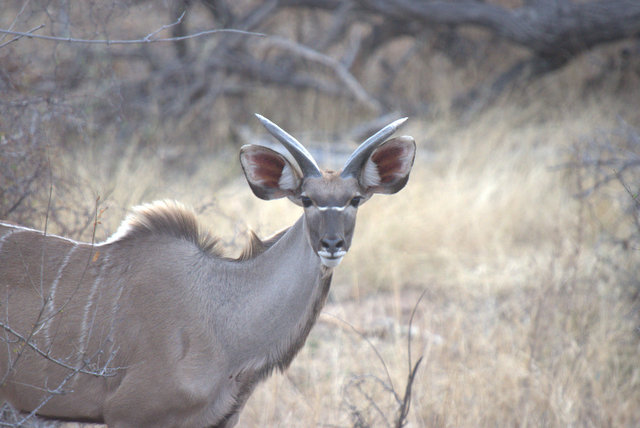 Young male kudu seems to take an interest in us as we stop to admire the perfect symmetry of his young horns. While we as humans might struggle to replicate this perfection on a consistent basis, horned ungulates are able to do so almost without exception. 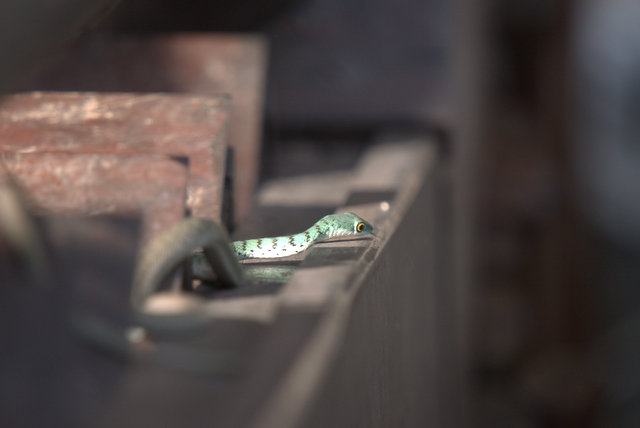 This Spotted Bush Snake was discovered by a staff member in camp. Although not venomous, it has a nasty temper and will strike out at those who try to handle it. Hence, I chose to photograph it while keeping a distance. 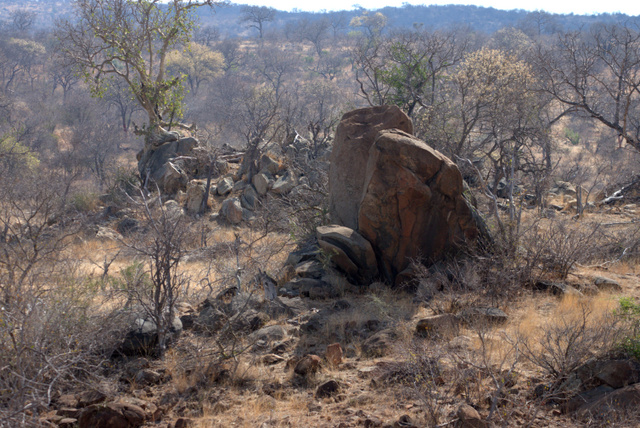 Although this image might seem to highlight the rocky outcrop in the foreground, it is the Rock Fig that had caught my attention.

FYI: While the tree is not much use to humans, the latex it extrudes has medicinal properties that purportedly can be used to remove skin warts. The bark is used in a potion for ‘strengthening’ purposes for men, while the leaves are used to promote fertility and good crop yields. 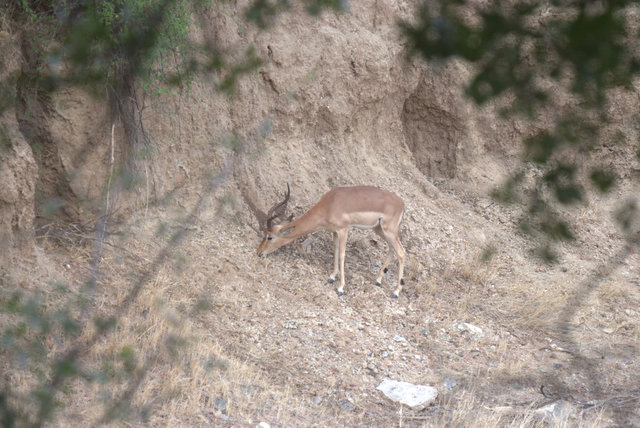 A lone male impala makes an appearance in the dry river bed near the camp. Although plentiful, they fall prey to almost every predator species. Even adult baboons have been known to catch and kill the young lambs. 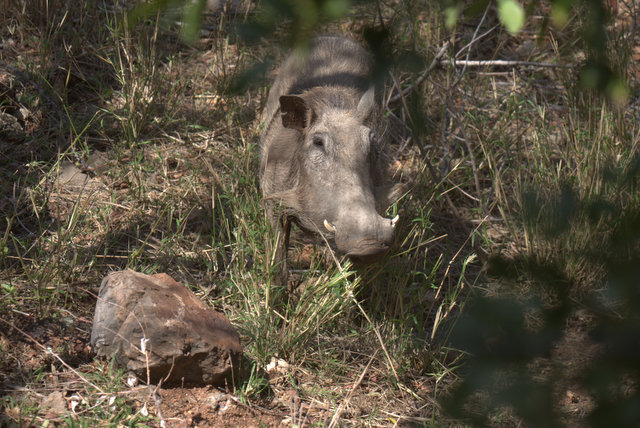 A face that only a mother could love? This warthog is one of the animals that The Lion King made famous…”Pumba”, international guests will often exclaim when seeing on in the wild for the first time. 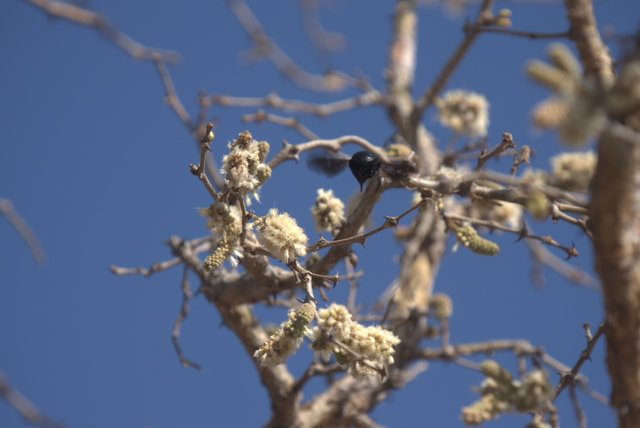 A Black-thorn tree against an incredibly blue sky. I noticed it during a morning coffee stop, predominantly for the flowering parts which caught my attention. The wood is termite resistant and is often used for fence posts, while the majority of the tree is eaten by game species who enjoy it immensely. 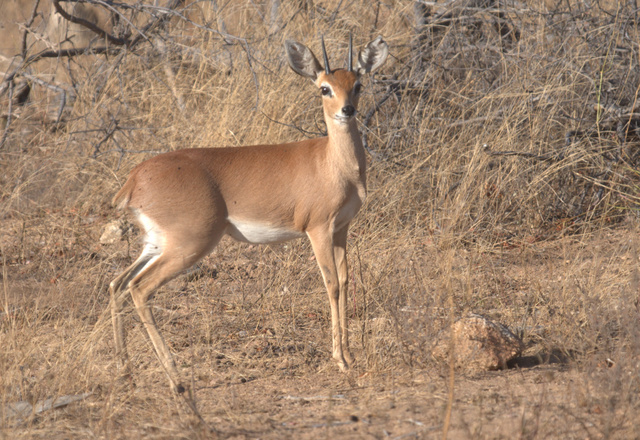 Seeing that Steenbok are solitary by nature, this is how they are usually spotted. Alone, like this adult male. They do, obviously, pair up during the mating season. An interesting trait is that they are known to bury their dung so as to throw predators off their scent. 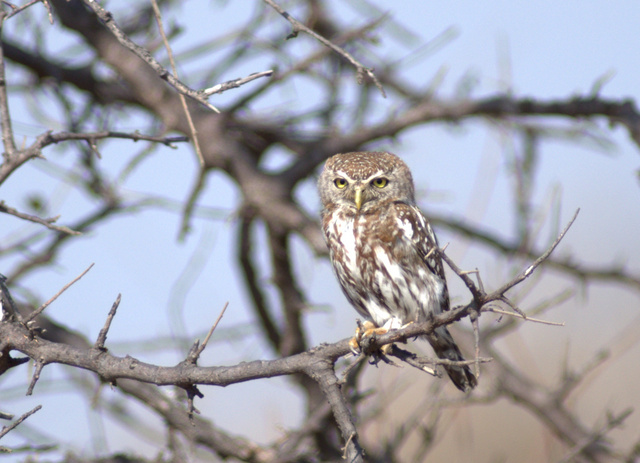 Did you know that the collective noun for Owls is a Parliament? Well, now you do and given the fact that they are meant to have wisdom beyond their species one can see why that analogy is so apt. This Pearl-spotted Owlet watched intently as we stopped to watch it for a while. 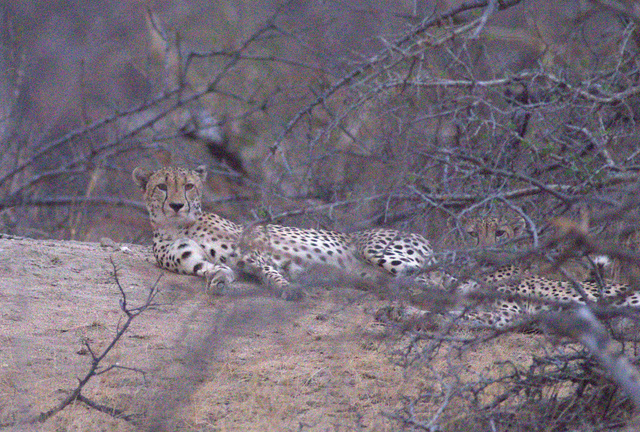 Persistence pays off…finally and unexpectedly, this coalition of two cheetah brothers was spotted on an early morning drive. I say unexpected as Balule Nature Reserve is not normally home to this species, yet these two boys had found their way in and were seemingly at home in the area. They were skittish and did not allow us to get any closer than this. 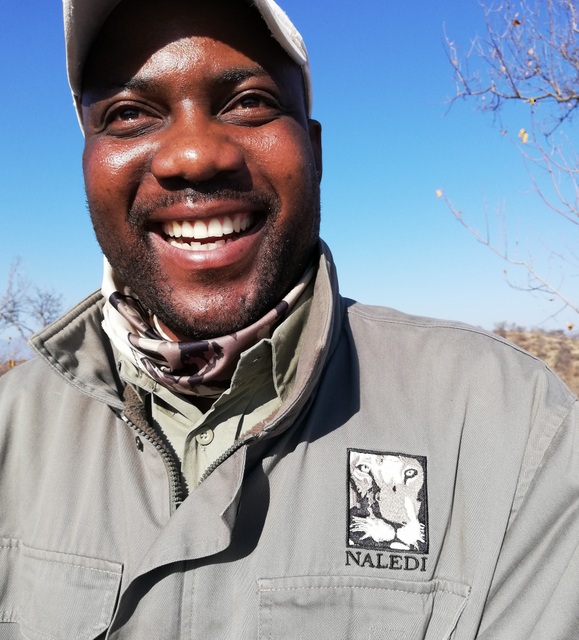 Now THis is the face of a happy guide! Specifically, after the cheetah sighting which took all of us by surprise. Sighting cannot be guaranteed as the animals are in their natural habitat, however, that being said, knowledgeable guides and trackers can almost preempt where certain game MIGHT be and that is what makes for successful experience. Come with no expectations, not every drive or walk is an episode of a David Attenborough tv series.

SA Blog Awards results are out!

On our way home from KZN…I learn a lesson on the...

A Sofa Safari at Jamala Madikwe.

By night the Klaserie Sands River camp takes on a new...

Our cruise on Voyager of the Seas taught me…

Images from my time at the NJ MORE Field Guide College.