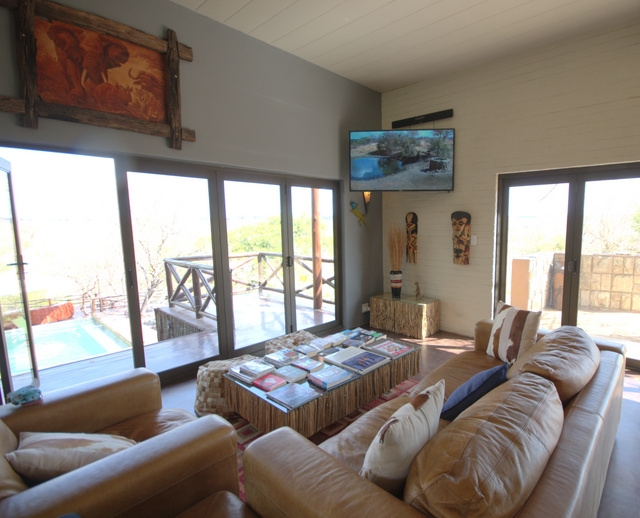 Why would I begin a posting on Rosie’s Pan hide with a picture of the main lounge at the lodge? Look closely and you will notice a large flat-screen on the wall in the corner. It is not there to show TV programs, it cycles through the cameras at the waterholes on the property. In this way, I was aware as to what might await me on my arrival at the remote hide. 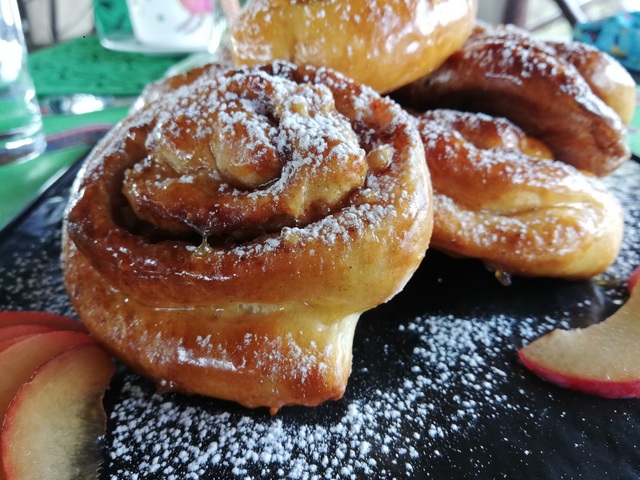 As important as my camera equipment. Some baked goods from breakfast to keep me going during the morning…and until lunch, of course. 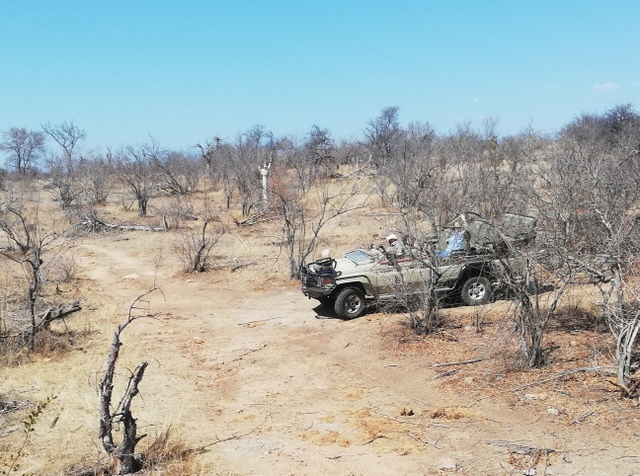 Drop off time… 09h52. The drive from the camp to the hide is about 20 minutes and my wife came along as she had missed the early morning outing. Not wanting to join me, she returned to the lodge with Vuyani once the hide had been checked for ‘critters’ of any sort and I could be left safely on my own to enjoy what turned out to be a special and meaningful time. 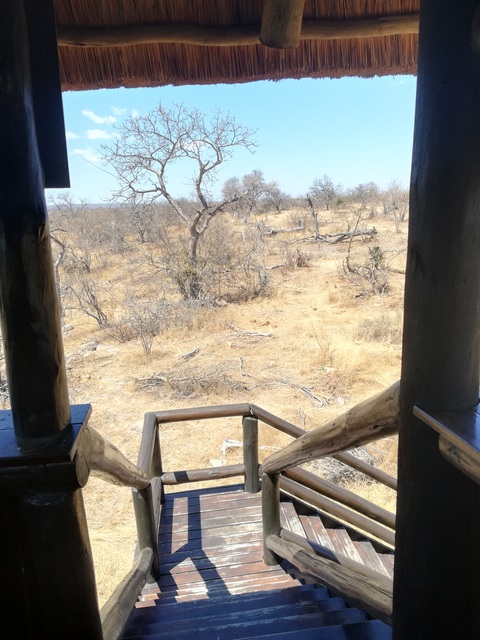 I should imagine that if predators of some description chose to climb the stairs, they could. However, as it turned out in this case, it was just me standing here, waving the vehicle goodbye. 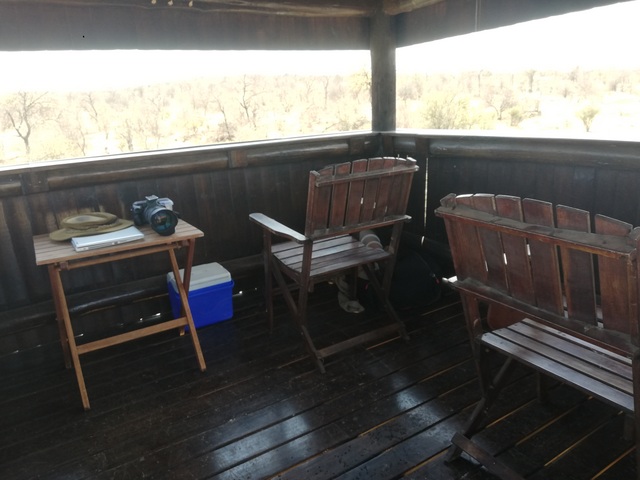 Solitude (noun); The state or situation of being alone. “I savoured my hours of freedom and solitude”.

And that is why I was here. To revel in the remoteness, the isolation and the seclusion that my time in this hide would afford me. There are tables and a variety of chairs that can be utilized, but I was soon to discover that the wooden ones offered me an unobstructed view over the lip on the opening. The reason for this ‘alone‘ time was two-fold. Firstly, I wanted to meditate on the 6-months of COVID-19 enforced lockdown and the ramifications of what that had done to me from both a physical and an emotional perspective. Also, spending quiet time out in the bush, far away from the urban sounds that I had been constantly subjected to during lockdown was cathartic for me. 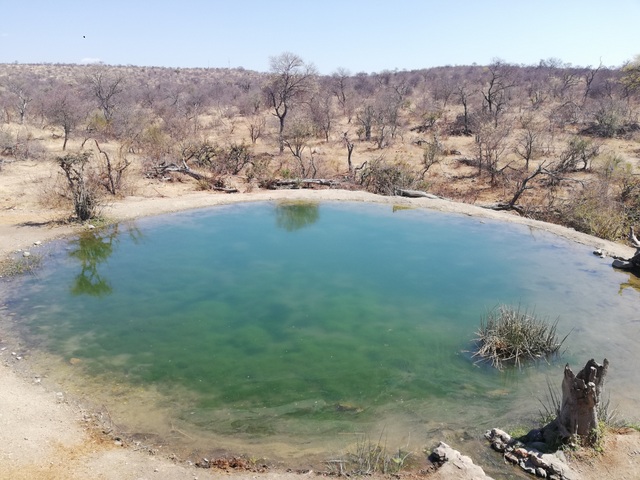 10h25…Although I had brought a laptop with me, there are no electrical outlets to charge the device, so I left it turned off and sat back to enjoy whatever would eventually come to the waterhole to drink. With my seating arrangement finally to my liking, I took stock of my surroundings. At this particular point, the only other living creature in the water was a terrapin. We eyed each other as it slowly circumnavigated the pond, looking for morsels to feed on. 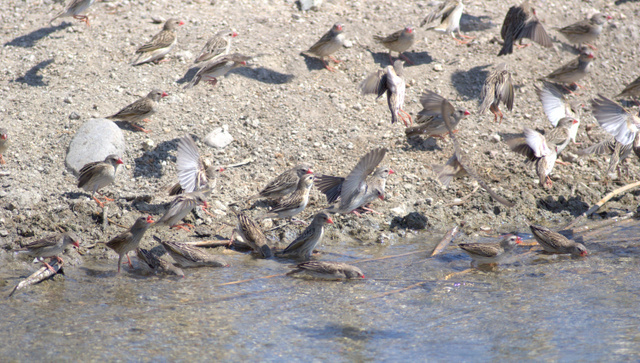 10h29…The first arrivals. Red-billed Quellias. After the domestic chicken, this is the most numerous bird species on the planet, with numbers in the billions. Only still for momentarily to sip water, they would flit back and forth between the edge of the water and nearby trees, where they had taken up vantage points. 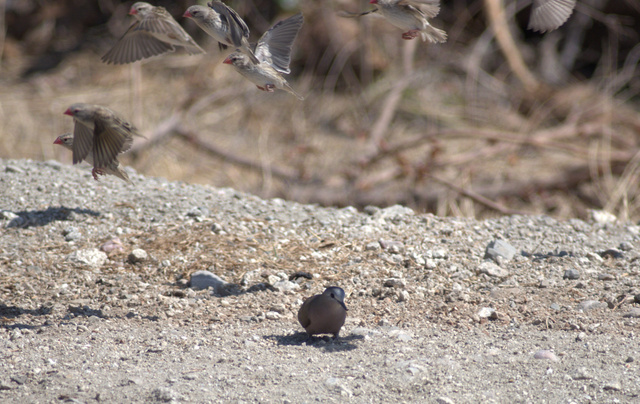 This Cape Turtle Dove did not seem to be too phased by the constant tooing and froing and fluttering of hundreds of wings that was going on around and above where it was trying to drink. 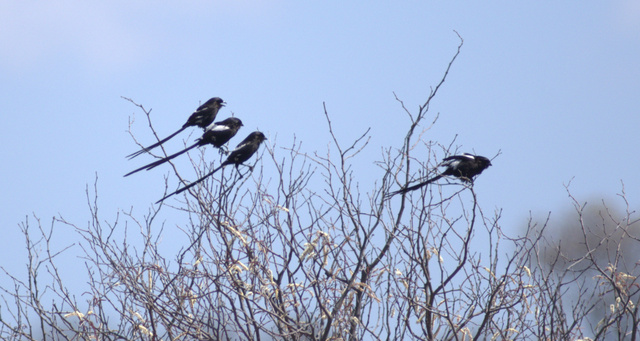 10h52. This noisy group of Magpie Shrikes arrived after the Quellias had left. They stayed for a while, not drinking but merely claiming a space before heading off. I wondered if the individual on the right had done something to offend the other 3 or if it was perhaps the leader-of-the-flock? 10h52: A Red-Billed Buffalo Weaver keeps a lookout. It arrived and left without descending to the water. 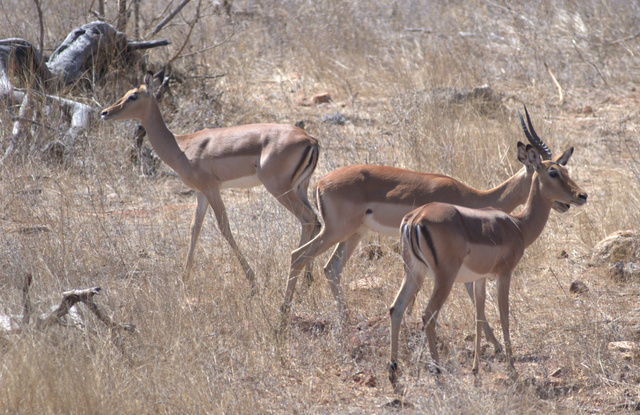 12h57: Finally a rather skittish herd of impala arrived. This was their second visit of the morning as I had seen them on the TV in the lounge while I was having breakfast. I hoped that my patience was about to pay off as I had been here for about 3 hours and this was my first 4-legged sighting. Not that I was complaining. The object of my time here was just “to be” and whatever I saw was treated as a bonus. 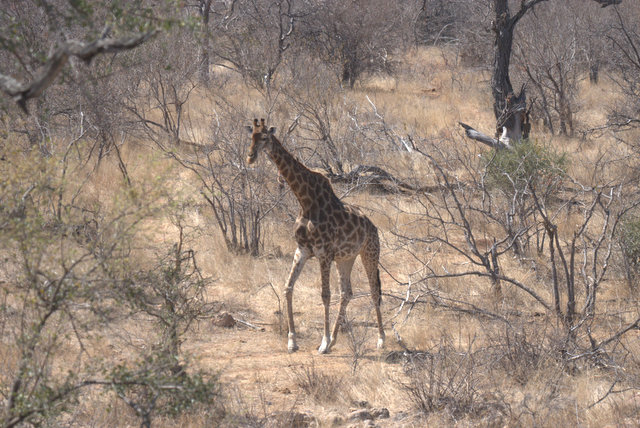 13h08. Persistence pays off. This was one of 5 giraffe that came to drink…eventually. 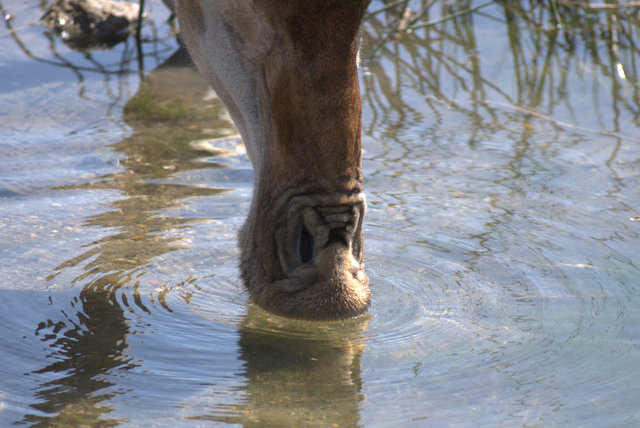 And boy can they drink! I came to realize this fact while trying to keep focus with a hand-held heavy lens. Thus, it became a waiting game for me. Trying to get a shot, but not constantly focussed to the exclusion of everything else that was happening in my peripheral vision. 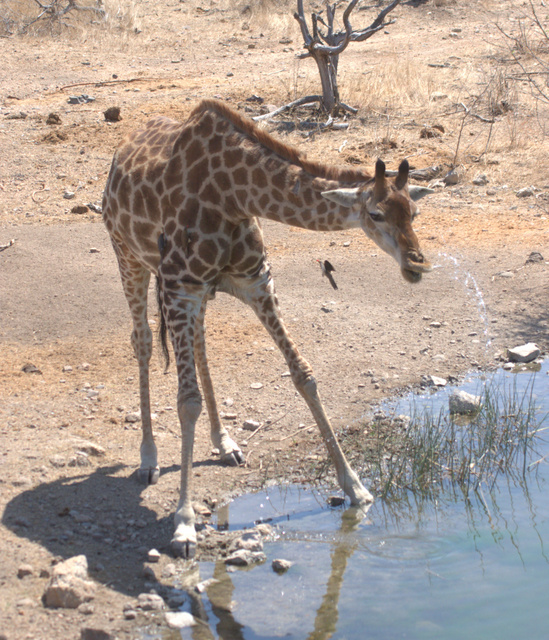 It had to come up for air…and safety eventually. And it did, dislodging a Red-billed Oxpecker in the process. 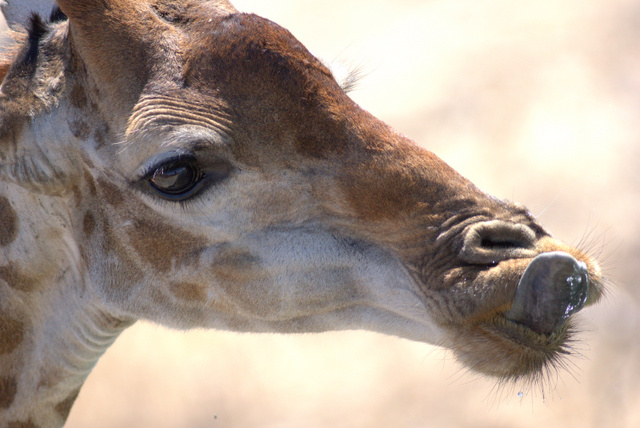 Lip-smacking good… water glistens on his tongue, while excess droplets fall off the hairs on its chin. 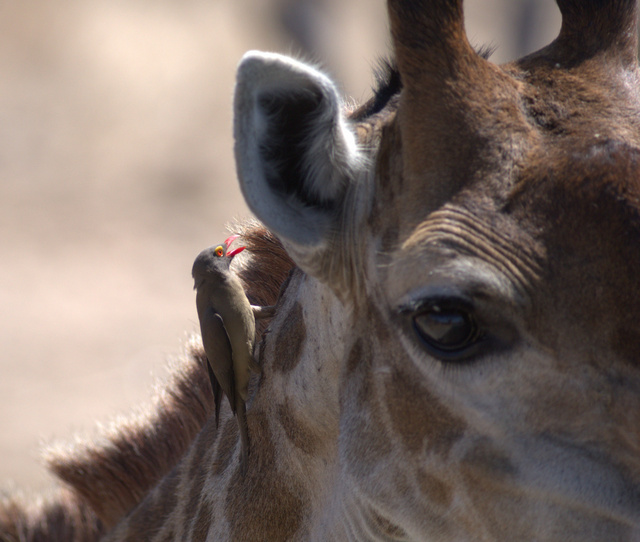 Psst…want to know what I want? What I really, really want? This rather cheeky Red-Billed Oxpecker seems to be having a word with its host. This was one of a plethora of them that were perched on the neck of the giraffe, cleaning off parasites and ticks. 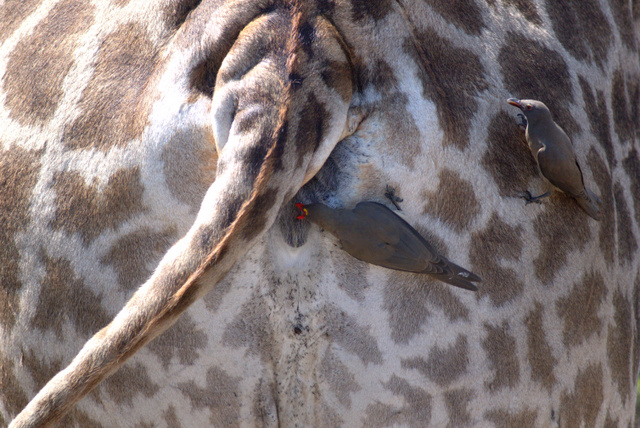 This is where all the best morsels are…or so it seems. I watched as this bird annoyed the giraffe just enough to make it move its tail…and then it swooped in to claim its prize. 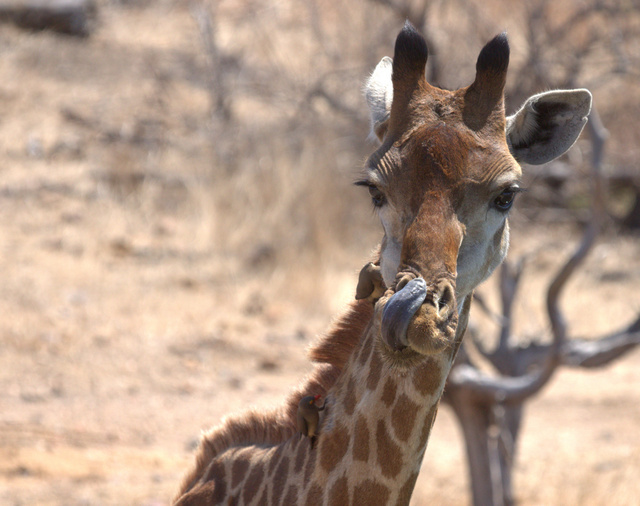 Meanwhile, at the other end… 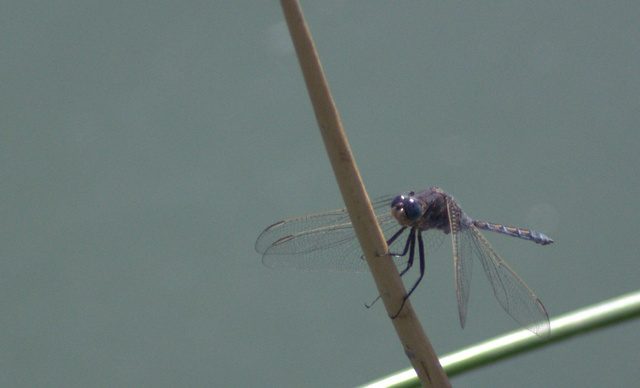 14h02…One of the aspects of sitting in solitude for 5 hours, was the fact that I was able to enjoy both the big and the small. It was this connection that allowed me to fully appreciate what COVID-19 has meant and more importantly how lockdown has affected us all in a variety of ways. I would recommend that if you are visiting, you try and make time for yourself at Rosie’s Pan. Just a short while after I took this image, the sound of the Land Cruiser in the distance signalled the end of my time at Rosie’s. Although reticent to leave, my time was up and I was ready to return for lunch and the afternoon game drive. My thanks to the staff who facilitated this outing.

Bit of this and that from my Chobe adventure

Arb images in Black and White…

Things with wings. From a recent road trip to Greater Kruger...

Our “Circle Tour”…Istanbul, but NOT as the tourists see it

The seasons they are a changing

Faces from the places.Insight Vacations trip 2014

Can a Leopard change its spot?