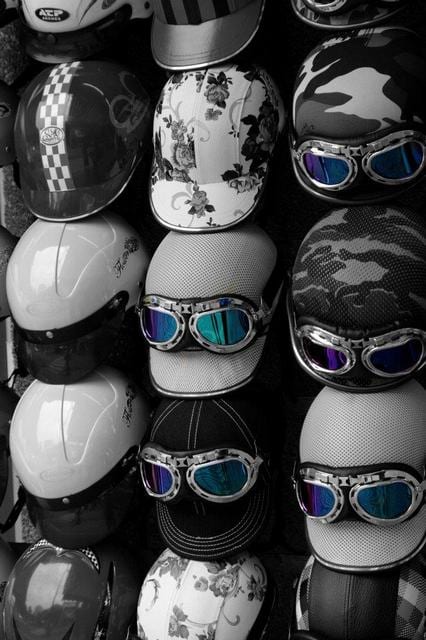 As I write this post in July of 2020, I am still a non-travelling travel writer and as a result, I am currently delving back into my image archive to share some of the more memorable moments of international destinations that I have visited. For this posting, I will be focussing on part of a trip that I did along the Eastern seaboard, from Saigon to Hanoi.

To me, scooters are one of the iconic forms of transport throughout Vietnam. And even though the majority of the helmets are made of plastic and would not survive a crash, there are some that are more practical rather than to just appease a traffic safety regulation. 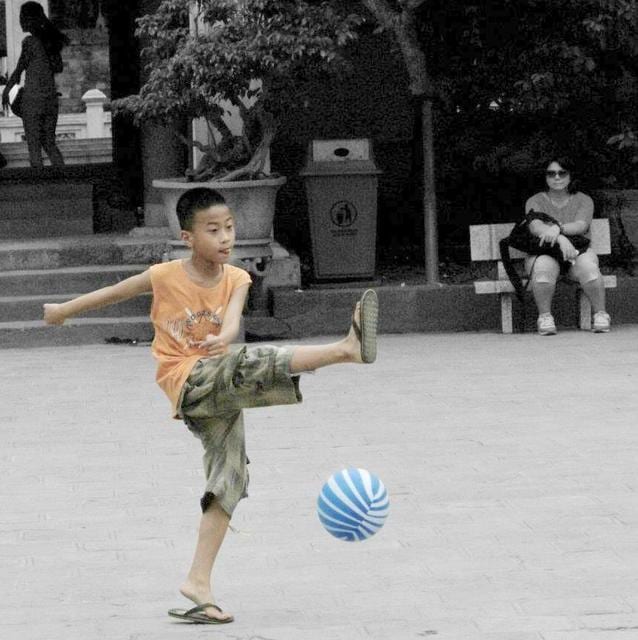 Trudging around endless temples and tourist sites can eventually get to be a tad tedious, hence a moment with a youngster and a soccer ball. While my wife wandered off, our tour guide and I decided to have a friendly game. No one was keeping score and it was just a momentary interaction that hopefully gave him a story to tell his friends, much as it has given me an image and a memory to share with my readers. 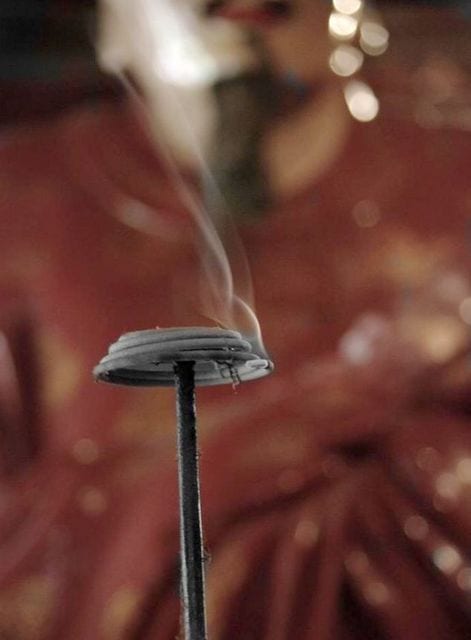 These incense sticks can be found at Temples throughout Vietnam, especially at exam time. Students will light these in the hope that they will get good marks. I am uncertain if they still have to do the work, or they just literally leave it in the lap of the gods. That being said, the students that I did see lighting these were doing them by the handful. 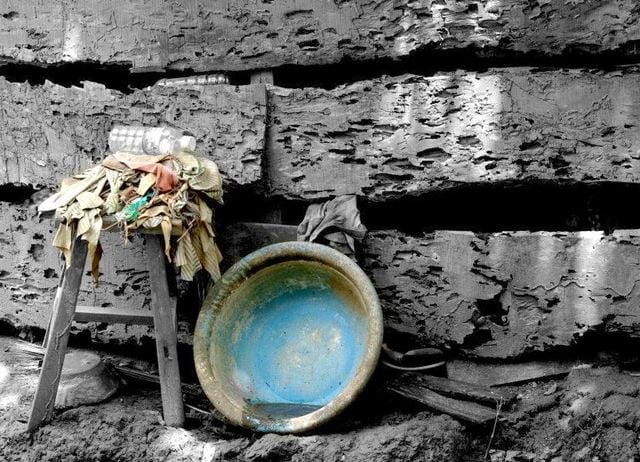 It was the vibrancy of colours that often attracted my attention. Like this bowl and what looked like a collection of rags. Items like this could be found around almost every corner and in alleys that ran between buildings. 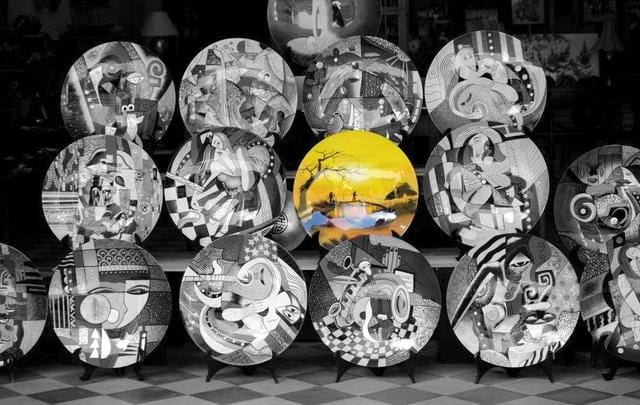 I discovered that surrounding the main market in downtown Saigon was a plethora of shops selling similar items, like these colourful plates. It turns out that streets are almost dedicated to single item selling. Spectacles, footwear, craft and carvings were just some of the items on sale. And given that they are all in close proximity to each other, comparative shopping is easy. 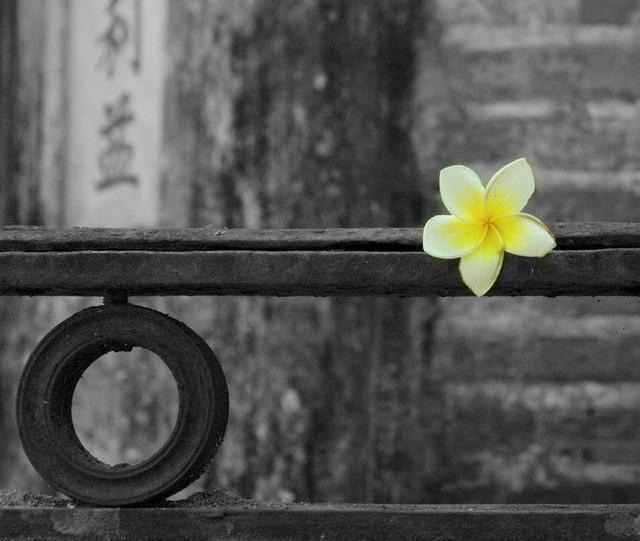 A blossom stuck in a railing outside a Temple. Did it fall there or was it placed by someone as a tribute or to acknowledge a memorable moment? I have no idea, but I do like building improbable backstories around simple moments like this. 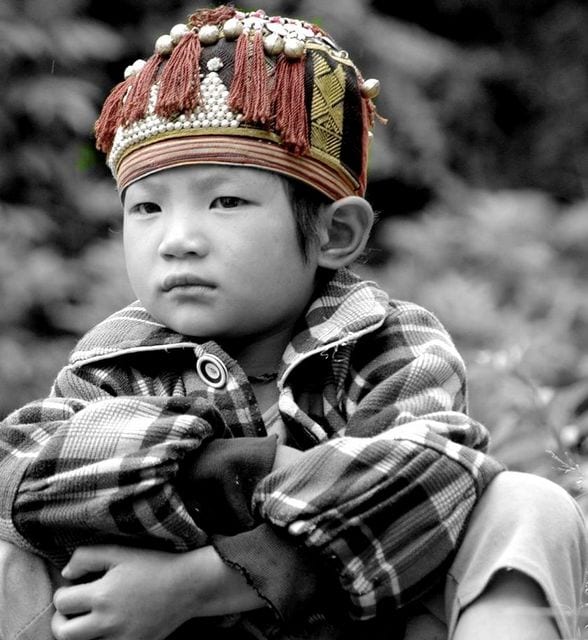 The face of a new generation? One that will hopefully be taught about the atrocities of a war (1955-1975) that decimated the local civilian population and killed young men from a continent on the other side of the world for no apparent reason.

It has been brought to my attention that Vietnam can be spelt as two words, Viet Nam.  Viet meaning people and Nam meaning south.  This was created centuries ago to differentiate the Vietnamese from their ancient enemy, the people of the north, the Chinese. Currently, this spelling is only utilized by the Vietnamese government and the United Nations.

A fisherman leaving the floating fishing village is located in the heart of Bai Tu Long Bay, belies the hard work that the population living in the village carry out on a daily basis to make certain that they have food to eat. From young to the elderly, if they don’t fish, they don’t eat. This series of bays, a 4-hour drive from Hanoi, is home to some of the most beautiful scenery I have ever witnessed. It certainly should be on the “must-see” list of every visitor to Vietnam. 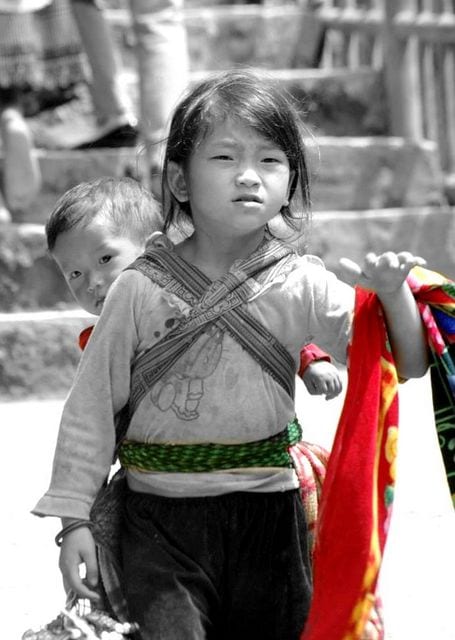 I noticed this young girl at the Kat Kat falls. I cannot remember (this was back in 2011) if she had items for sale or if she was just interacting with the tourists.