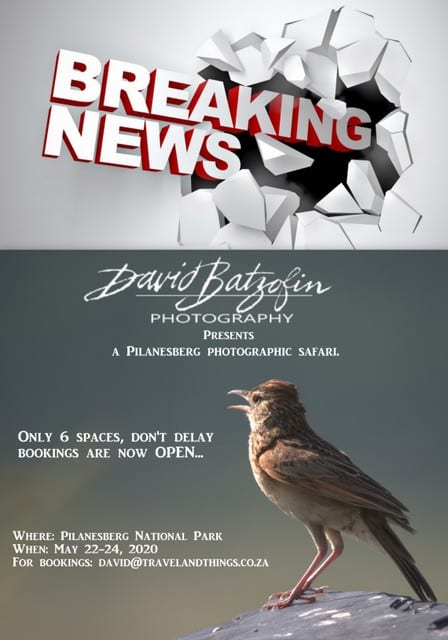 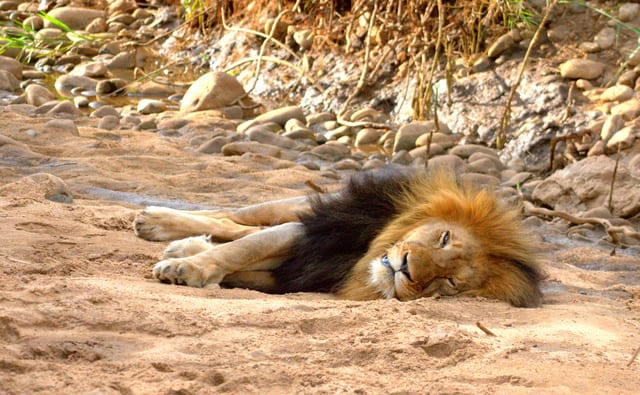 When I first found this male, he was doing exactly what lions do for between 18-20 hours a day…sleeping! Lying on the warm sand in a dry river bed, he seemed to have all that he needed…peace, solitude and a warm secluded spot to sleep in. But all that was about to change…radically.

FYI: Even though lions are seen on a regular basis in most reserves, their numbers have declined by nearly 90% over the last 100 years. Yet, there are still countries that allow legal hunting AND there are certain cultures where lion parts are used in traditional medicines. 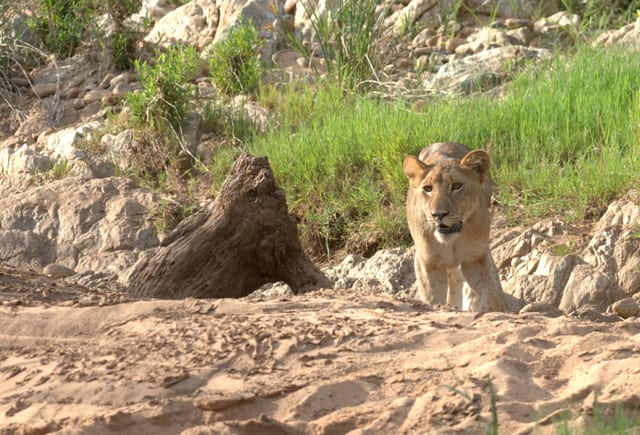 Pride facts: Lionesses, as well as the female cubs, will live together for life. The males either leave the pride of their own volition when they reach maturity or they will be chased off by the dominant male. These excluded males might form coalitions of their own or they can remain solitary, meeting up with the females only for mating. 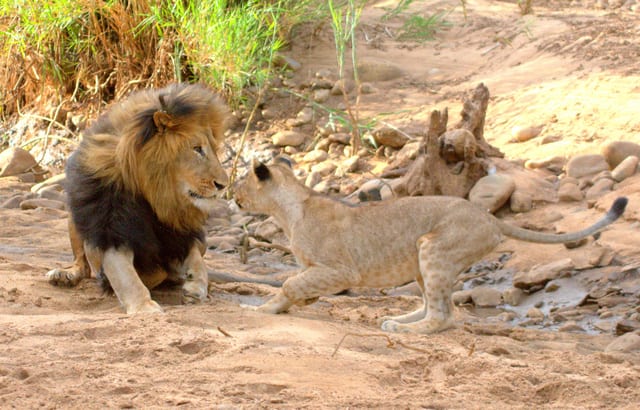 “Bloody Hell, why did you wake me with no warning”, is what the lion seems to be saying. I have always wondered why lions are referred to as the “King of the Jungle” when they tend to live and hunt in the savannah areas of Africa. Surely it should be the tiger that is “King of the Jungle”, as that is where they are usually found? No amount of online searching could give me a definitive answer, so, for the foreseeable future anyway, the phrase technically correct or not, will stay as is.

Lion facts: Males can weigh in excess of 200kg and grow up to 2,4m in length, however that puts him in second place to tigers who can tip the scales at 385kg and grow to 3,2m! 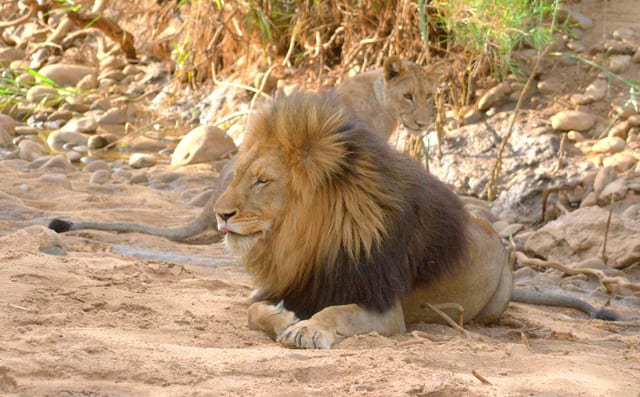 Dozing off again while his cub watches on…

Safari facts: Lions are often the easiest to find when in the bush. They tend to sleep (not true sleep as they are well aware of their surroundings) for up to 20 hours a day, hence if found in the morning, there is every likelihood of them being in the same place in the evening. 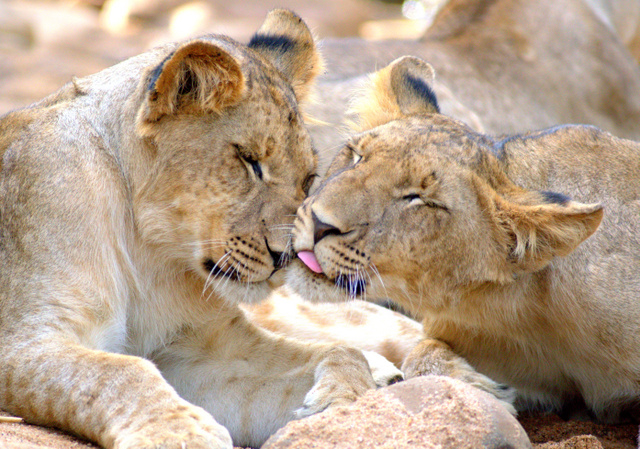 Sibling love or the calm before the storm? Cubs will play together to establish dominance when there are youngsters of different ages within a pride. 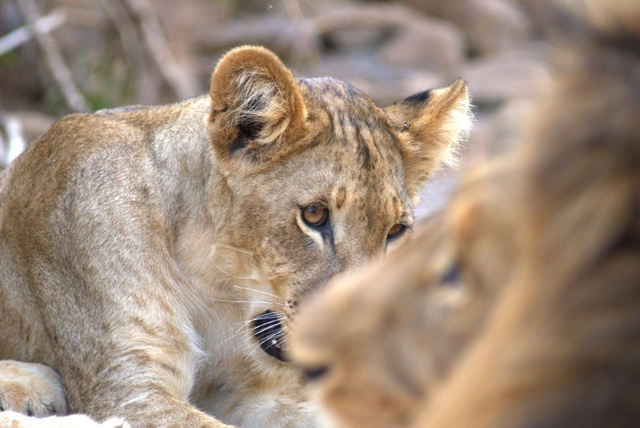 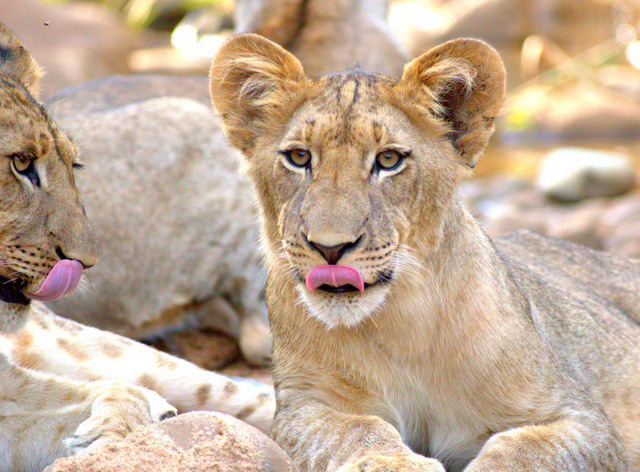 “I can lick my nose, you give it a try”…or this is a precursor to a potential meal? 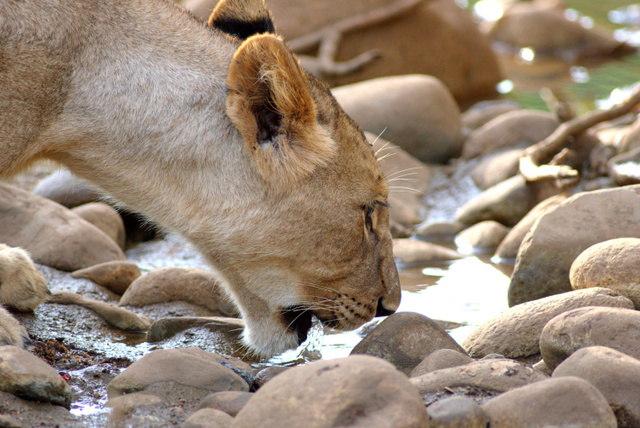 But first, a cool drink of water will have to suffice.

Interesting fact: Lions can go up to 4 days without drinking water, but they need to eat every day. The blood and moisture from the carcass can supply hydration needs for the short term. 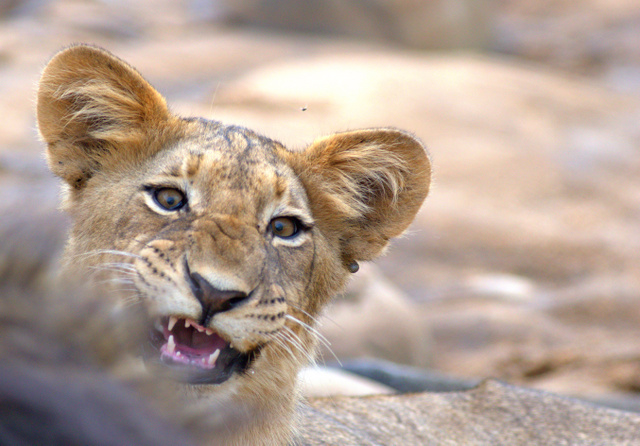 Luckily there is a LARGE lion between us or I would be on you like a flash.

Lion facts: Their roar can be heard up to 8 km away and the louder and more impressive it is, the more that it makes other males wary of their presence. 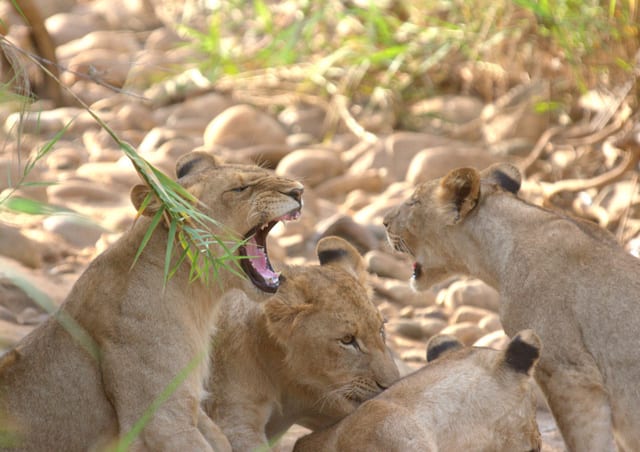 “I can open my mouth wider than you can” 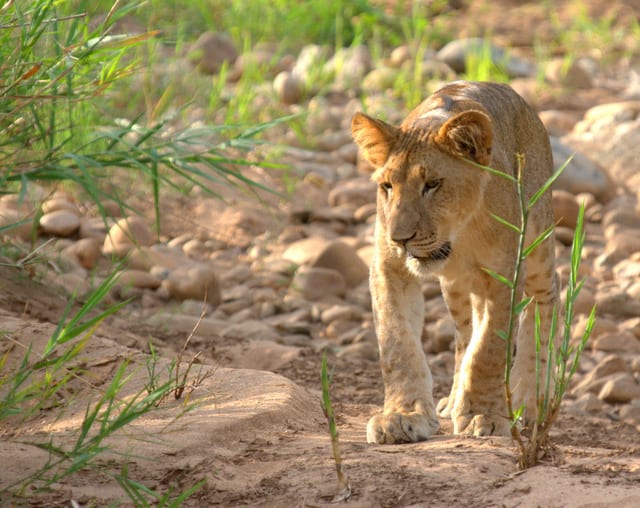 This cub decided to stay away from the initial action but later joined the other 6 siblings.

Cub facts: All lions are born with blue eyes, that change to brown or amber at 2-3 months. The birth weight of a cub is about 1.5-2kg, about 1% of their adult weight! A full-grown lion can weigh in at about 200kg 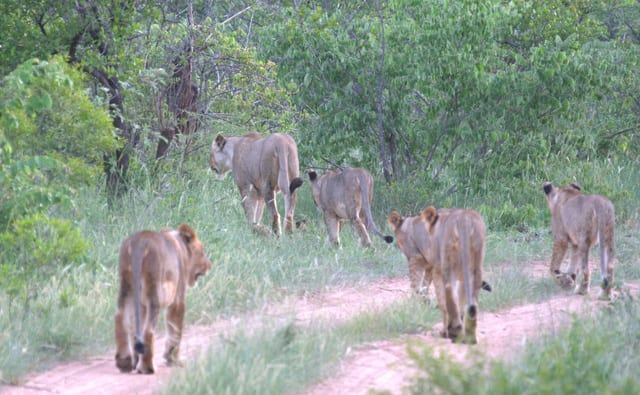 Off to find food? I did find one of the adult females with some of the cubs on a subsequent drive. And the male popped up on almost all of the drives that I did while I was in the reserve. I do hope that they all survive to adulthood and go on to start their own prides. 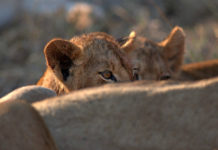 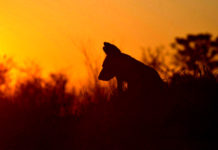