Working with EcoTraining has taught me the value of being immersed in any bush experience. I was truly grateful for recently being ‘allowed’ to share an intimate space with the largest of all land mammals, Elephants. 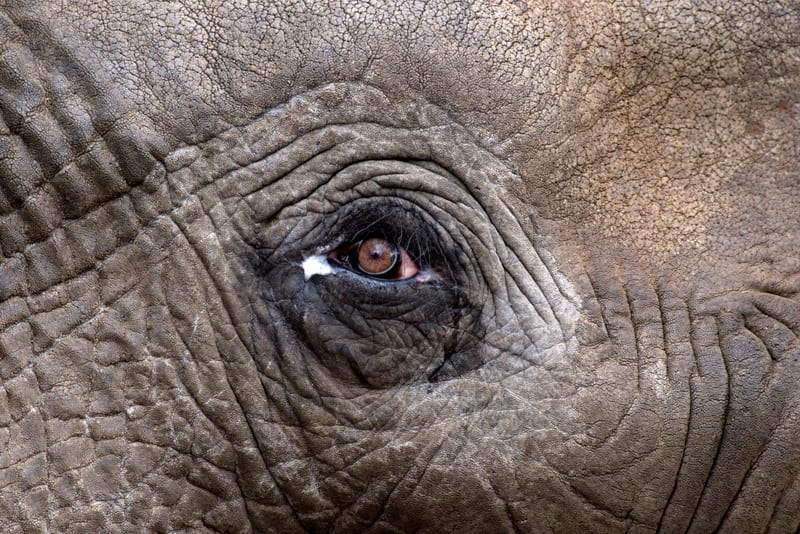 Important warning: Do not try this unless you have been informed by those in charge that the elephants are comfortable being this close to humans.

It was a rare experience for me to head towards the Pridelands waterhole with the ‘wrong’ lens attached to my camera. When the herd was at the water, the 560mm, f/5.6 Pentax lens was more than enough to get me excellent images. Was I was NOT counting on was the fact that several of these pachyderms would end up less than 2m away from where I was seated! One of the golden rules of walking in the bush is “NEVER RUN“…and the same was true in this instance. Having this huge animal testing the wind just a short distance away from me had my flight or fight reflex on high alert. However, I fought my natural instincts to move and instead I just sat calmly and allowed myself to be “in-the-moment”. When I was able to focus on a part of the whole, I took the shot. There is an adage that says, “How do you eat an elephant”? The answer is “One piece at a time”. The same is true when trying to photograph an elephant THIS close!

Fun Fact: Elephants are intelligent animals, having the largest brain of any land mammal and that includes humans. 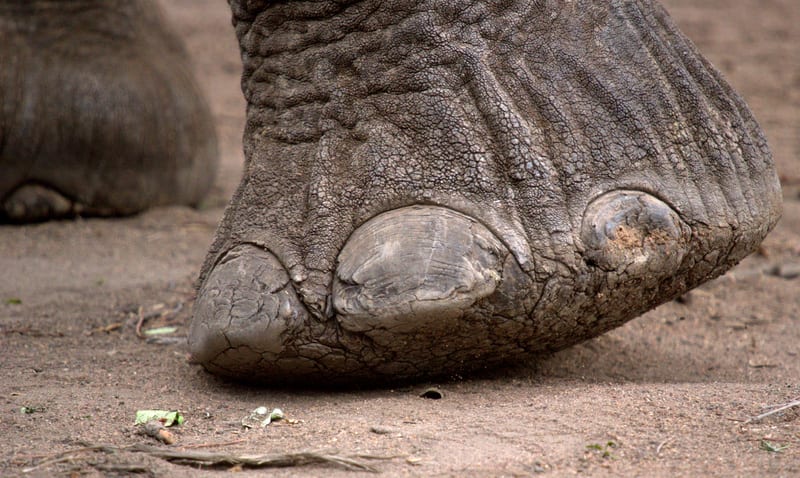 If you walked through the bush barefoot on a daily basis, you too would pick up problems with your feet. If elephants have an Achilles heel (pun intended), it is that this is where most of their problems start. Imagine trying to pull out a thorn without a tweezer…or having a proper pedicure occasionally.

Fun fact: Elephants actually walk on their toes. The bulk of the foot is constructed out of a fatty tissue that acts as a shock absorber. It is for this reason that they are able to walk almost silently through the bush. 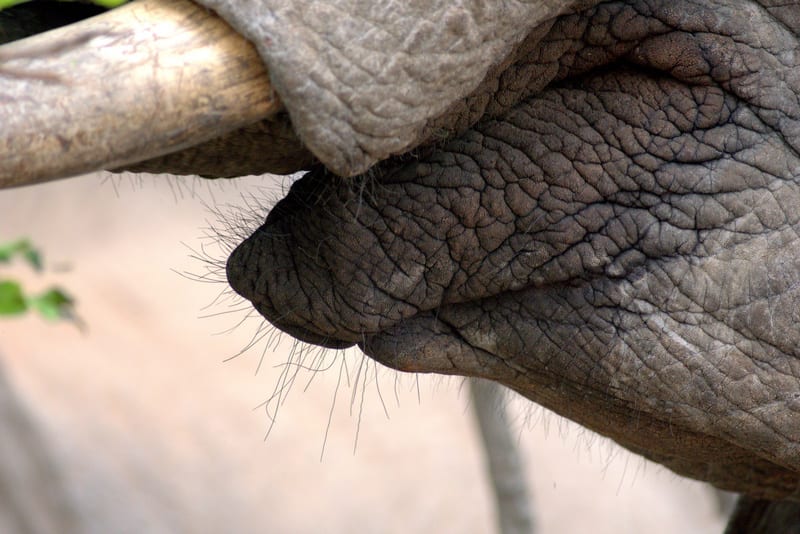 I could not have been closer if I tried. The hairs around the mouth are extremely sensitive and can aid the animal in what it decides to chew and swallow. 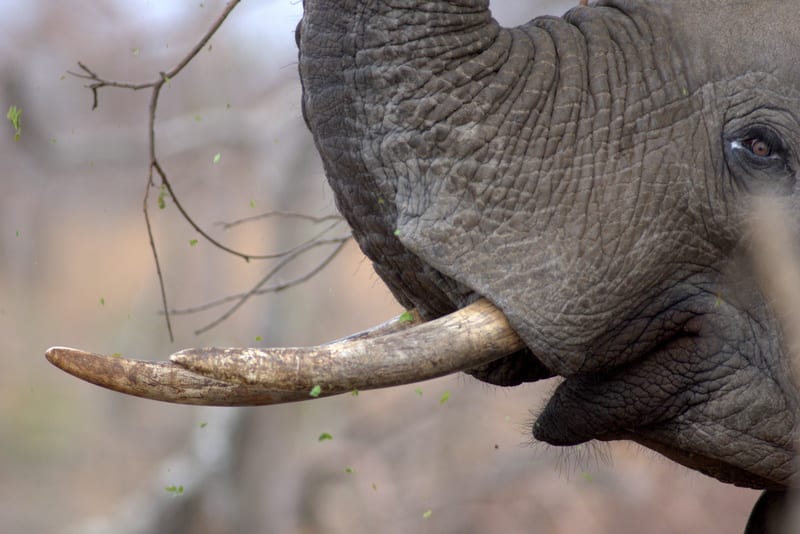 Shake the tree. Given their size, you would think that they are the strongest land mammal but believe it or not, that distinction goes to the Leafcutter Ant. Elephants are well behind the Gorilla, Eagle, Tiger, Musk Ox.

Fun fact: Weighing in at between 0.01 and 0.03 grams the Leafcutter Ant is capable of lifting and carrying almost 10x its own body weight! 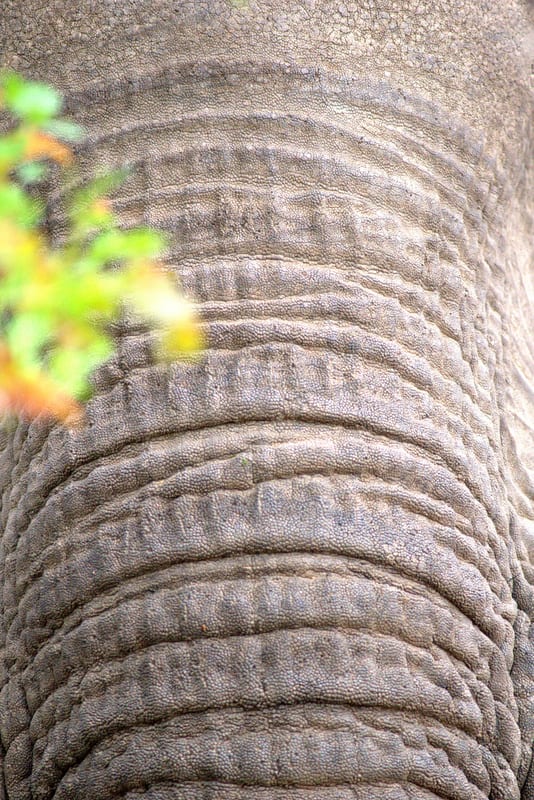 Using only its trunk, an African elephant can lift between 300-500kg. The trunk can be up to 2m long and has approximately 40,000 muscles. To put this into perspective, a human has 639 muscles in total. Aside from being able to lift large items, the trunk is sensitive enough to lift up a single berry without crushing it.

Fun fact: The trunk can weigh up to 140kg, the size of a large human. 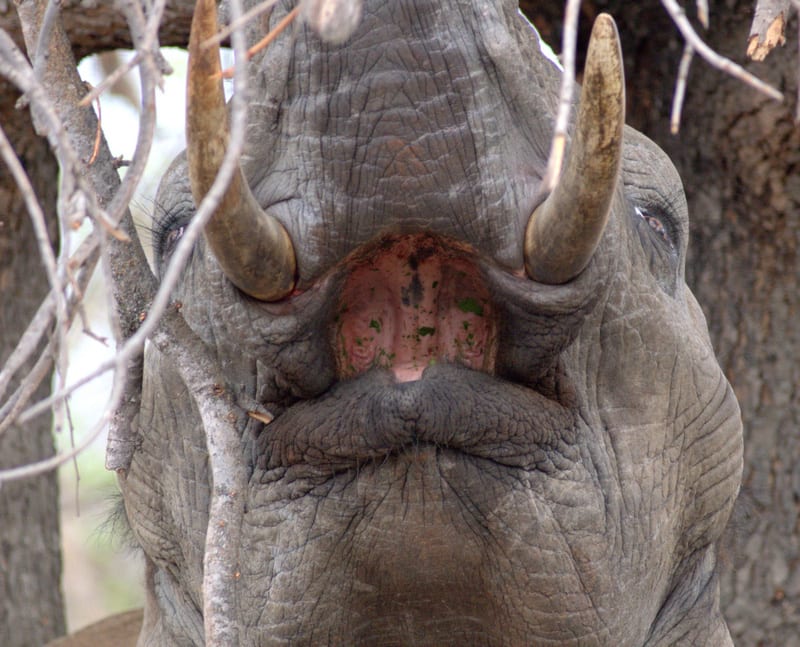 Sitting as close as I was to this male, I could finally appreciate JUST how large these giants of the bush actually are. Male African elephants can grow to a shoulder height of about 2.5-4m and weigh in at between 2,500-6,600 kg. Although difficult to see in this picture, they have 26 teeth, made up of the tusks (incisors), 12 deciduous molars and 12 molars. The teeth move from back to front, with the new ones pushing out the old and worn ones. During the lifetime of the animal, it will go through 6 sets of teeth.

Fun fact: The largest recorded elephant was discovered in Angola. It stood 3.96m and weighed an incredible 11000kg.

Interesting fact: According to well-known author, David Bristow, the palate of an elephant is referred to as chilojo (as in cliffs that can be found in Zimbabwe) 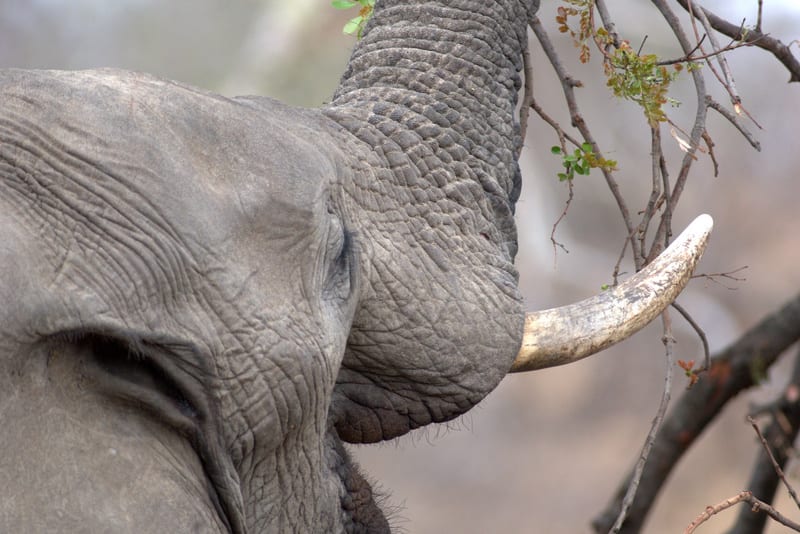 Aside from using it to feed with, the trunk is also used as a form of communication. It is one of the many signs that can be used to read the body language of a particular animal, should you come upon it while on a trails walk. 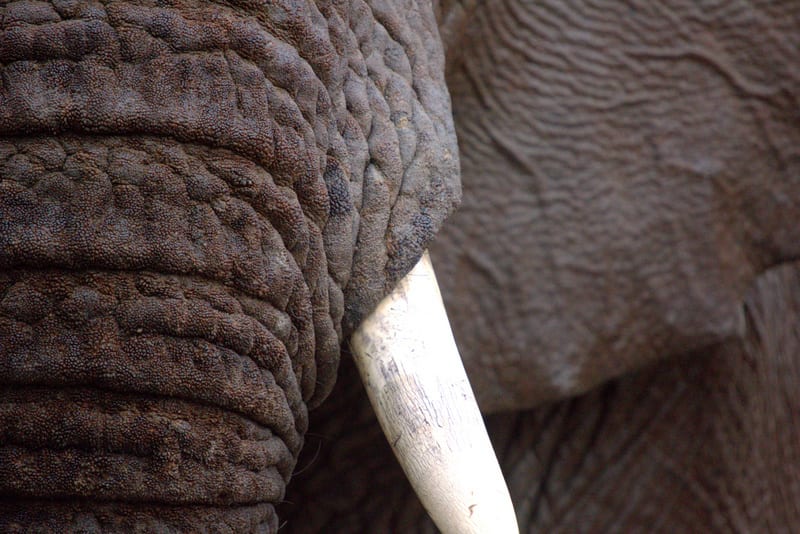 Elephant can be right or left tusk dominant and use these modified incisors for both defence and offence. They are also used for digging, stripping bark from trees, lifting objects and gathering food. They protect the trunk during a charge. 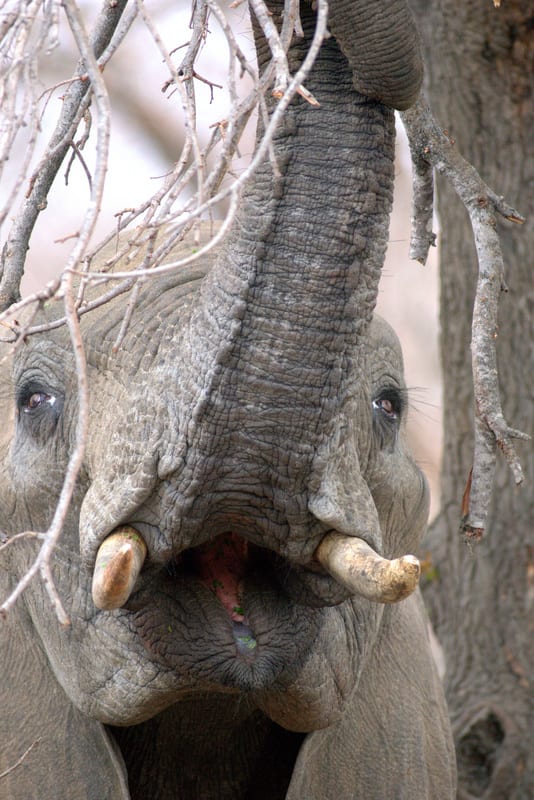 Food has to be placed into the mouth using the prehensile and very agile trunk. It has an upper lip and two nostrils that run its entire length. 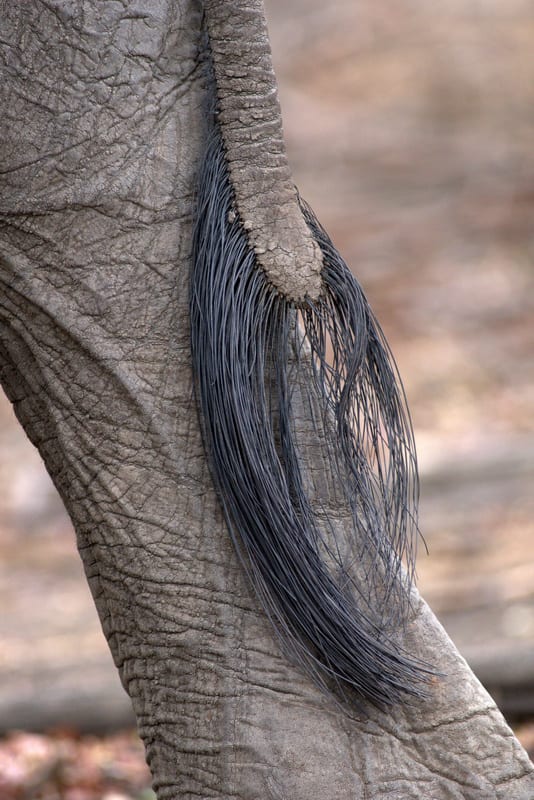 There is a useful appendage at BOTH ends of an elephant. The tails of the females are often used by their youngsters to hold onto as they walk through the bush. The tough hairs on the tail can also be used as a flyswatter to keep irritating biting flies away.

Fun fact: The tail hair of an elephant will not regenerate if lost. 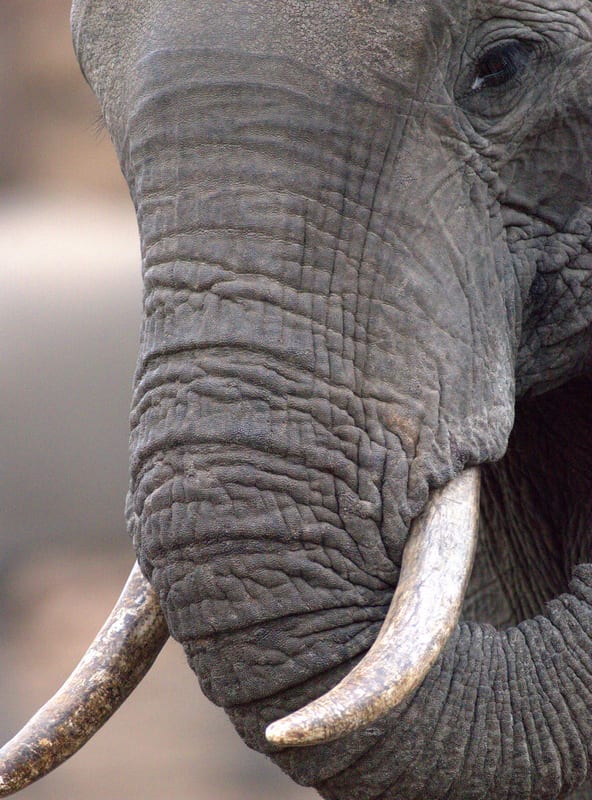 What elephants CANNOT do? Jump. However, neither can hippo or rhino. But the latter can have all four feet off the ground at the same time when they are running. 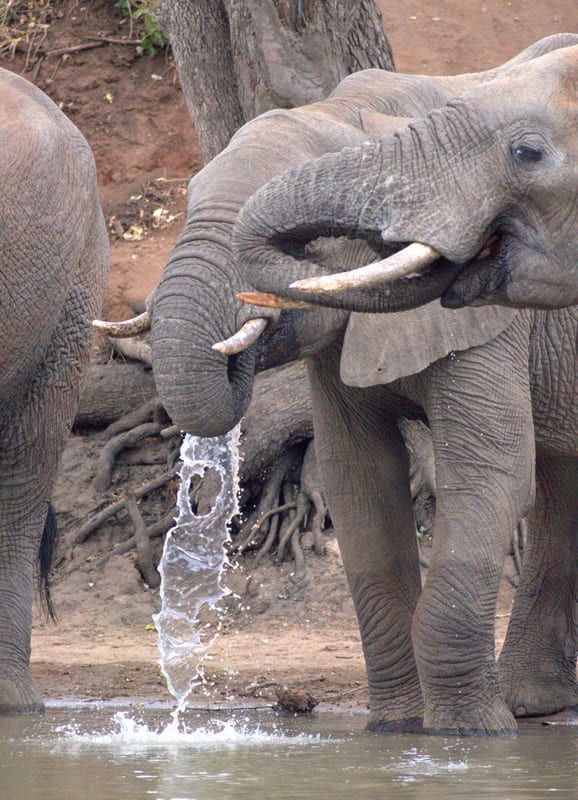 It’s 5 o’clock somewhere…I defy any human to try and ingest 12 L of water, which is what the trunk can hold. often it is a case of my-eyes-are-bigger-than-my-trunk, as there is a lot of water that does not make it as far as their mouths. That being said, it was glorious watching these beautiful and gentle giants participation in some family fun time.

Fun fact: Elephants can drink up to 189,2 L of water per day. And that is aside from the vast quantity of foliage they have to consume to keep themselves in good condition.

If you are thinking of a career as a Field Guide, then click on the company logo above to find out more about the courses that they offer and what might be suitable to fulfil your requirements. 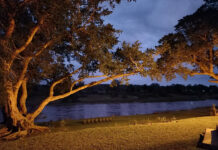 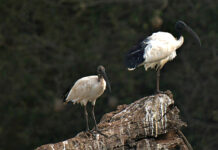 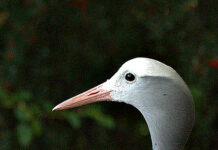