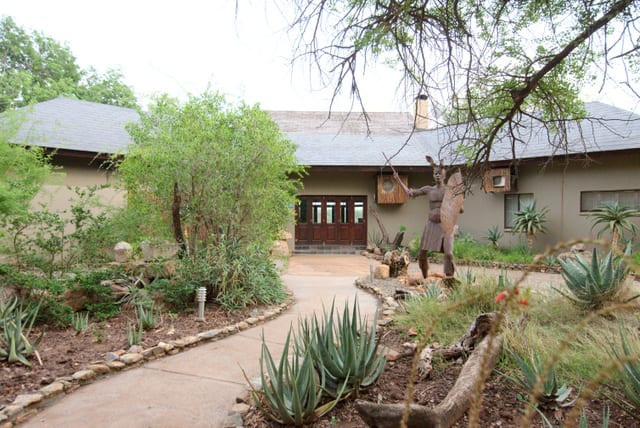 A convoluted but well-signposted road finally delivered us to this building at Mjejane River Lodge. Watched over by an imposing metal statue of a Zulu warrior, this is where we were welcomed and the ubiquitous indemnities completed before we headed off to investigate the rest of the property and our accommodation. Our orientation was conducted by Simon, who must have introduced himself to us at least 4 times during this process…and then we never saw him again for the rest of our stay. The staff that we did interact with at mealtimes and on game drives were very friendly and helpful. I want to single out our tourist guide, Myhunzi Zwane, who made our stay such a wonderful experience. 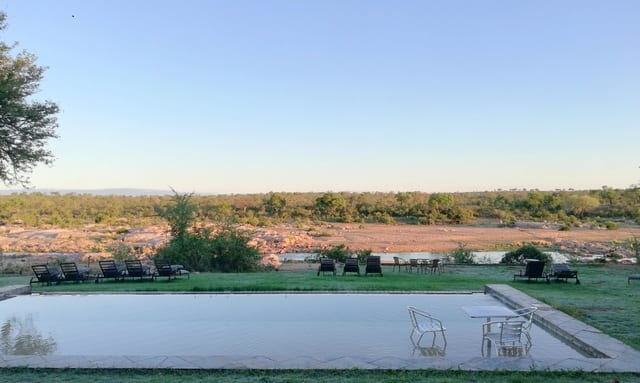 This is the vista that makes a visit to this lodge ‘worth-the-price-of-admission‘. A view from behind the pool, looking across the Crocodile River and into the Kruger National Park in the near distance. There used to be a bridge from the property directly into the Park, but that was damaged and had not been repaired when we visited. This means that guests who want to go on a game drive in the Kruger needed to get up 30 minutes earlier than usual in order to start their morning activity from the closest park gate. The drive options are either in the Kruger or on the Mjejane property. 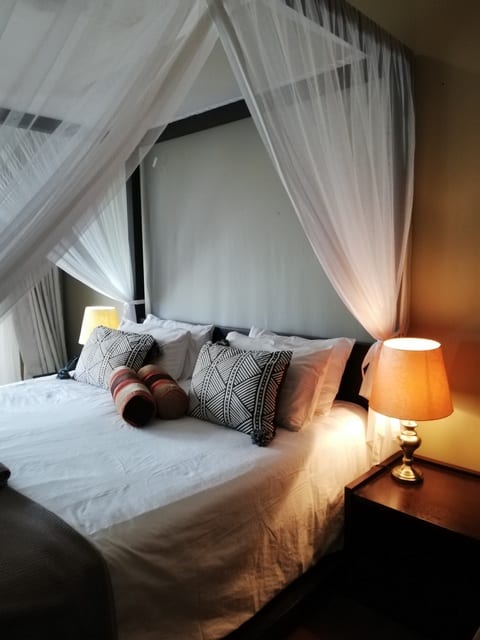 After a longer than expected drive ( just over 4 hours) from our previous camp, the bed did look rather inviting. But there were things to see, food to sample and game drives to experience first. “Miles to go before I sleep”…to quote from the poem “Stopping by Woods on a Snowy Evening” by Robert Frost. 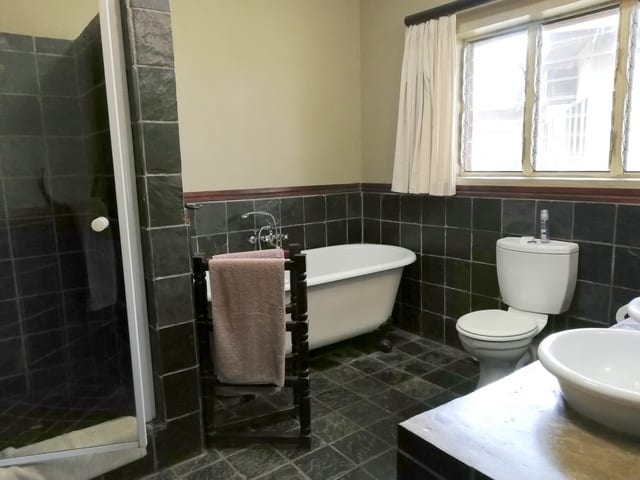 The bathroom might have looked somewhat old-fashioned, but it had both a bath and a shower…what more could we want. I discovered that my wife and I were staying in the older section of the property. There is a more modern section and visitors should check when they book exactly where they will be staying. That being said, we did not spend that much time in the room, which meant that as long as everything was working and comfortable, we were happy. And it was, including the TV and the small fridge that kept our complimentary bottled water very chilled. BTW, the brand name of the water is “Clearwater Revival”, I wonder if Creedance are aware. The name spoke to my sense of humour. 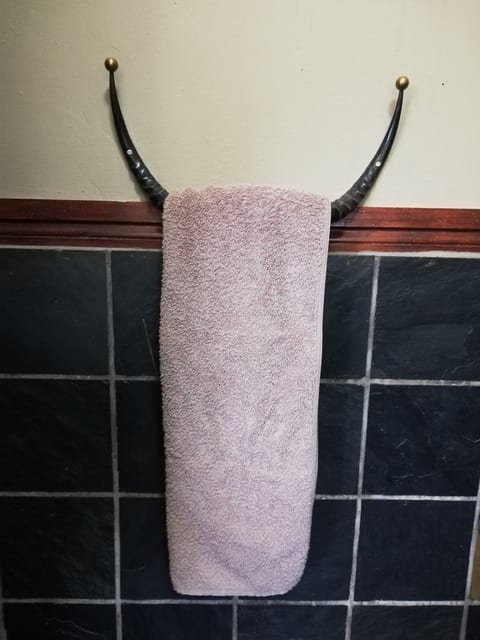 When you have lots of Impala horns and are uncertain what to do with them…turn them into bathroom accessories. A novel idea I thought. Not certain what the vegetarians, vegans and those who are easily offended might think. But they are utilitarian and they provide work for someone who has to make them, so let that be the focus. 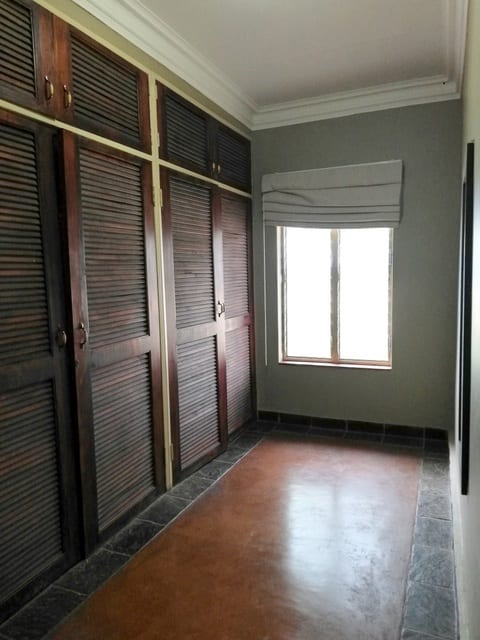 Our room had the largest dressing area we have come across. But to be fair, you could put a couple of extra beds in here for children if you needed the space. Our two suitcases were ‘lost’ in here. Without the blind rolled up, this area was very dark, given that the new low wattage globes were being used. As we were not actually using this space, it was not too much of a concern.

After years of trial and error, I have recently come to discover that putting out my morning game drive clothing the night before means that I can virtually dress in the dark before heading out. Not having to scrabble through clothing in a suitcase just takes a bit of forward planning. 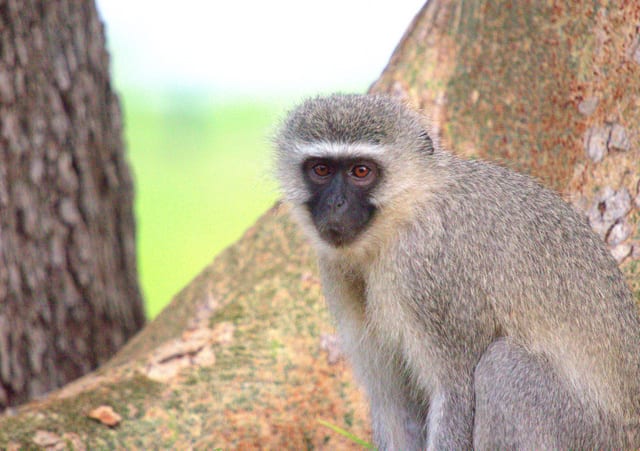 My 05h30 wake up call was delivered by this fellow. We had left the windows open to get some air during the night as I did not want to use the AC or the fan. I thought that the flyscreen covering the windows would be enough of a deterrent, but I was to be proved incorrect. The bang of the body coming through the window awoke me instantaneously and seeing the curtains moving, I grabbed them without thinking. I quickly realized that I had a rather large, wriggling animal, wrapped up in the material between my hands! I let go and that point, this animal emerged at my feet. The fly-screens have velcro on the inside, so getting in was easy, getting out a different story. My wife had locked the door and not left the key in the lock, hence the monkey and I got into a staring competition, while my wife watched from the bed, protected behind the ‘safety’ of the mosquito netting. I finally got the curtain and a fly-screen open and the monkey took the opportunity to exit at speed. It then proceeded to sit outside the door and glared at me. But a good ending for all concerned. A sign on the sliding door warning guests of possible intrusion by these pesky primates might be a thought, as it was not mentioned during the briefing when we arrived. 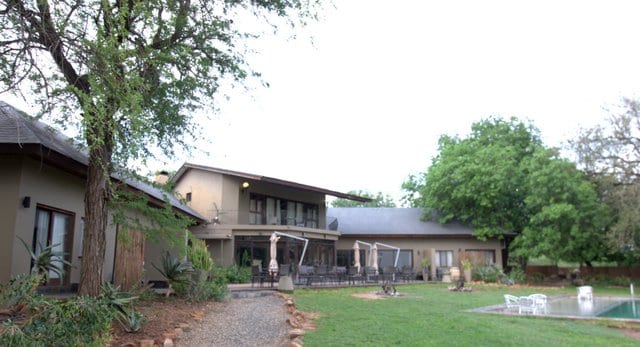 Looking from our accommodation back towards the pool and the main building. Notice the tables and chairs IN the pool? A great way to keep cool while enjoying drinks or a meal. The weather during or stay was somewhat fickle with rain threatening for most of our stay. only to arrive on our final afternoon game drive, thus cutting it short. But more of the game drives in a separate posting. 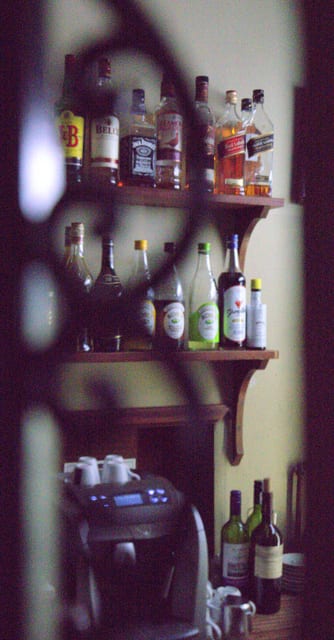 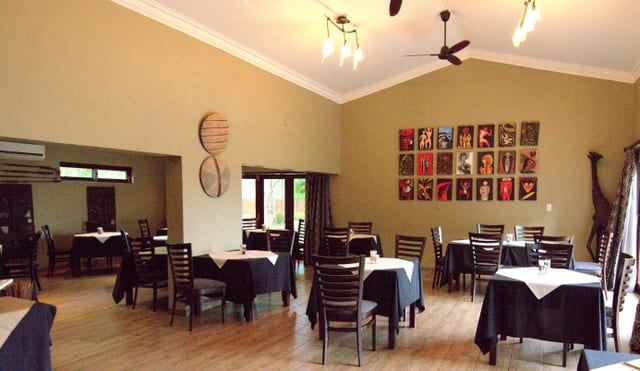 The dining room. Although it is the heart of the building, it is in need of some ambience. That being said, the rest of the visitors, all of whom seemed to be international, did not seem to be concerned by the minimalist decor. Their constant chatter and return trips to the buffet made it seem that the decor was the least of their concerns. 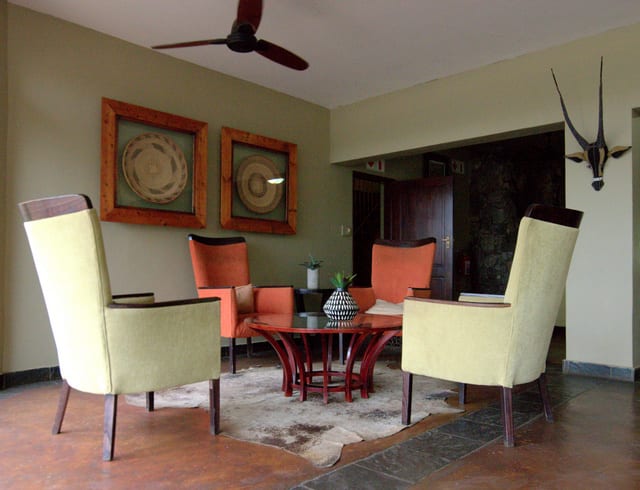 The lounge/bar is divided into three areas where visitors can relax before heading out on a drive or going in for a meal. This area was also used for dining purposes when a large group arrived. As it was very warm during our stay, we chose to sit outside most of the time. Given that there is a huge fireplace against the one wall, I am certain that guests will gather here during the colder winter months. 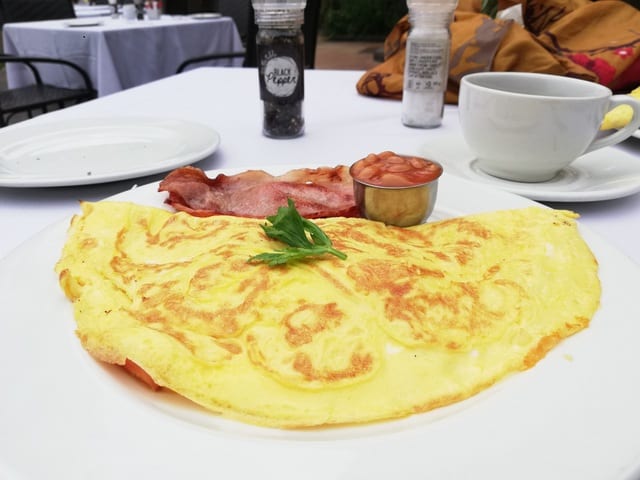 Breakfast of champions? One of the largest omelettes I have enjoyed. I did comment, jokingly, to our server that the following day my wife and I would share one…The next breakfast, the proffered meal was significantly smaller. But nothing was wasted and I was able to savour it without feeling too guilty about the size. More importantly, the order was correctly taken and the omelette contained exactly what I had asked for. A rather rare occurrence with this sort of breakfast as kitchen staff seems to put in whatever they feel like. But NOT during our visit here. On several occasions at other properties, I have had to return an omelette as it had ingredients that I had not asked for. 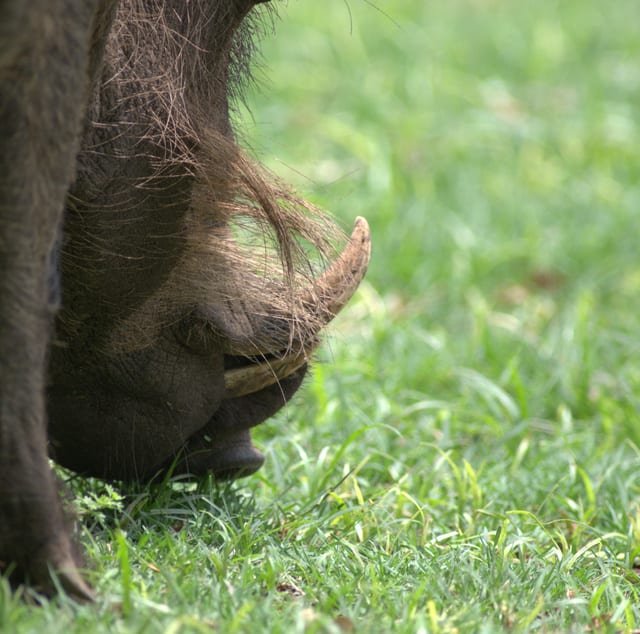 While we were enjoying our lunch, this female warthog was making a meal of the grass next to the pool. Several of the guests approached her seemingly thinking that she was tame. She made them regret their intrusion into her space very quickly! Warthogs, both male and female will attack when threatened and can inflict nasty cuts with their tusks. Perhaps some prominent signs warning visitors might be appropriate? 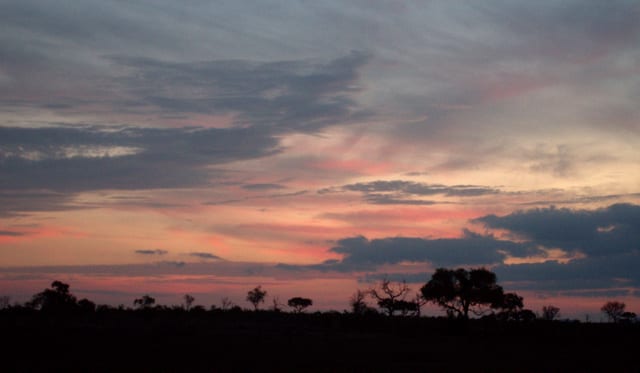 A multi-coloured sky over the African bushveld as the sun vanishes in the west. The sky foretold rain, but that did not occur until the next evening. This, together with sunrise are my best moments when out on a drive. Good night and peaceful dreams from the Extraordinary River Lodge. 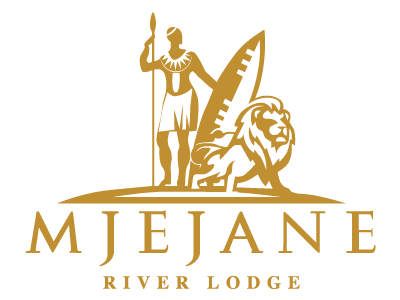 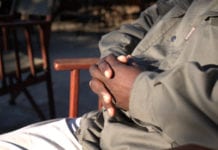 Around the fire…Time for tall tales at Mabula Game Lodge 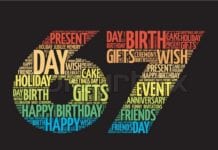 Happy birthday to me… 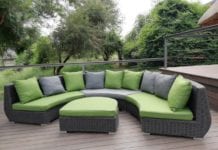 My experience at the NJ MORE Field Guide College, Waterberg

The SR52UT OLIGHT INTIMIDATOR. Let there be light.

Dubai Aquarium & Underwater Zoo at the Dubai Mall and the...

We do our part to conserve water thanks to this grey...

Hiding in the hide at The Bush House, Madikwe Private Game...