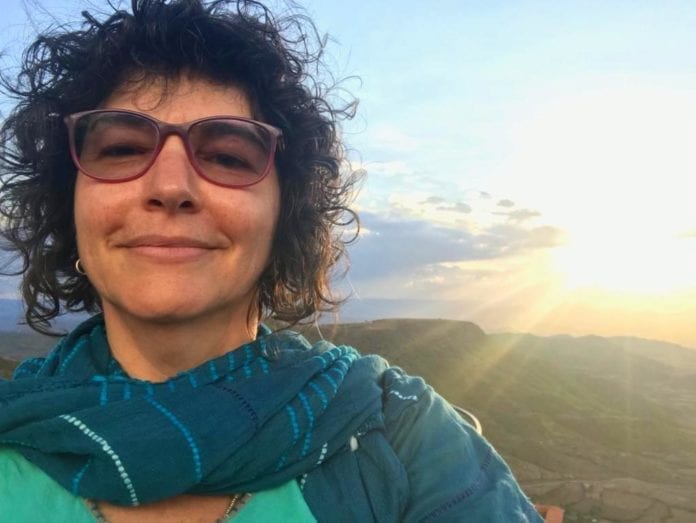 It has been a while since I have had a “guest” write for my Blog.
In this case, the writer happens to be my wife, Carolyn.
These are her experiences as I was not on the trip with her…
I recently went on a women’s only tour to the north and east of Ethiopia.
Its been on my bucket list for as long as I can remember.
So, when Venus Adventures offered this once- off  trip
due to demand from previous clients,
I jumped at the opportunity and booked it a year in advance.
It was unlike anything I had expected.
Truly worthwhile and memorable.
The only criteria are to have an open mind
and to be flexible with last minute changes to the itinerary!
This picture was taken at the second last night of the tour.
Sunset over Lalibela mountain range.
Lalibela is otherworldly with the rock hewn churches and mountain views.
Already popular with tourists, I can see that in the future it will crowded
given that there a lot of hotels currently being built. 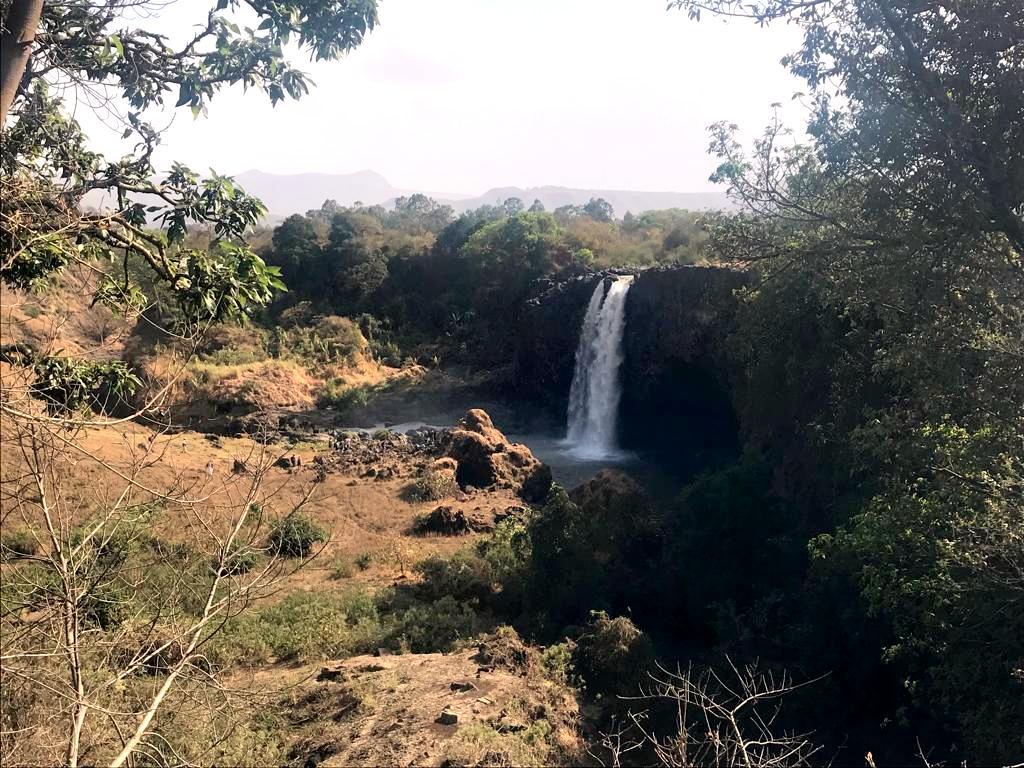 Outside semi tropical Bahir Dar…
One needs to have a sense of adventure to reach the Blue Nile falls.
An hour or so drive on rough gravel road took us to the starting point.
A small boat took us across the river and a 45 minute hike followed.
Along the way we met  locals and their animals along the way.
The falls that feeds into the river leading the Nile river in Egypt,
have been likened to the Victoria Falls,
but on a much smaller scale. 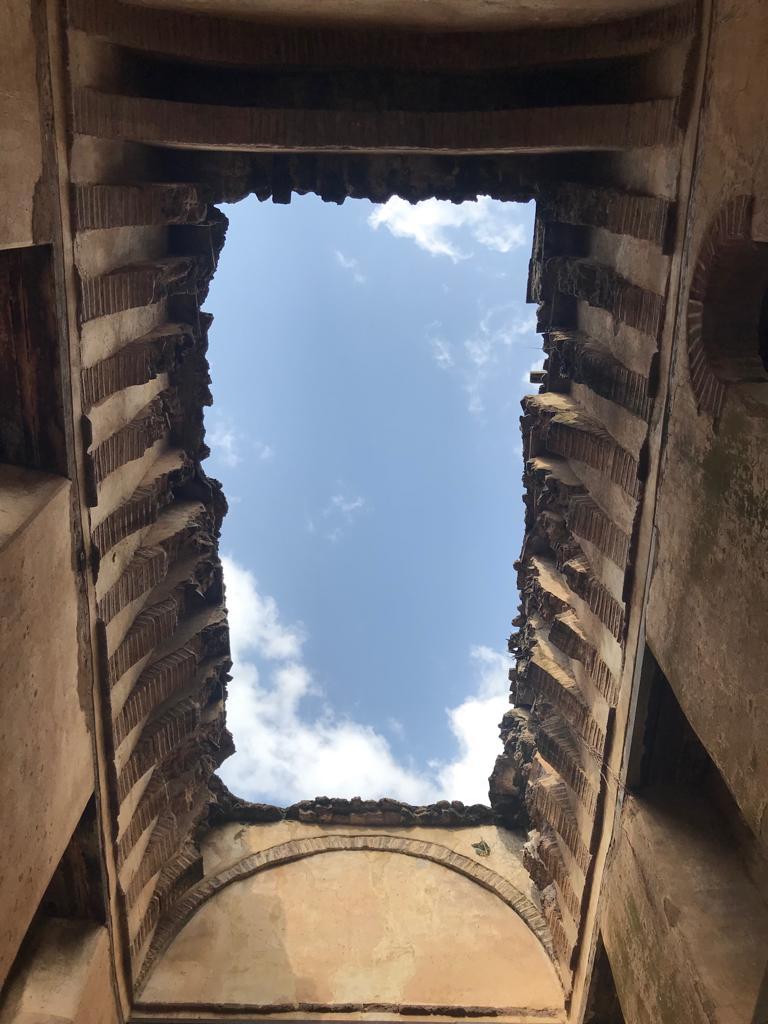 WW2 bombing by the Italians at one of the castles in Gonder.
Formerly the capital of Ethiopia between 16th to 18th century.
Finding kings’ castles was not what I had expected to find in Africa. 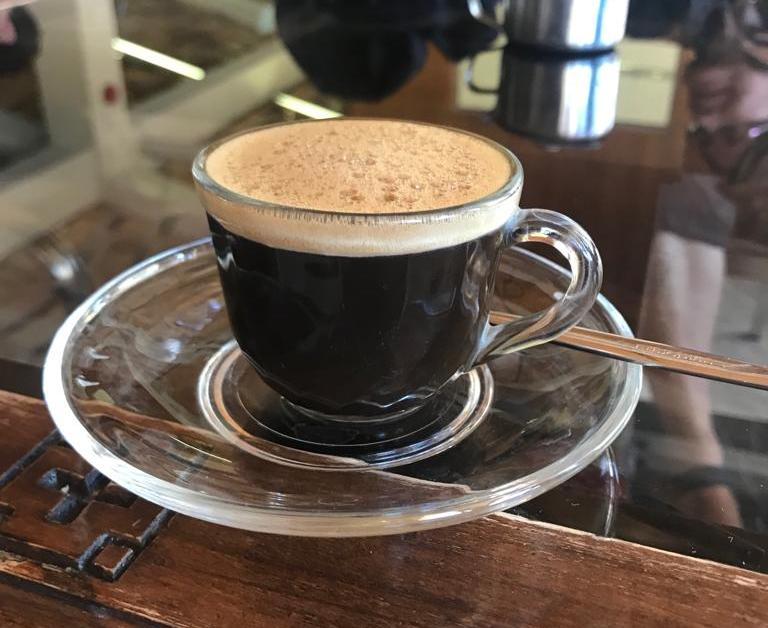 Ethiopia is world renowned for its coffee.
Coffee ceremonies are part of the culture and are an ongoing tradition.
During these ceremonies, that can be found everywhere,
the dried out coffee beans are  roasted in a pan over a small fire.
The beans are then ground and boiled in the traditional
coffee pots and poured into small cups.
(Most of luggage weight on my return was due to the coffee I brought back) 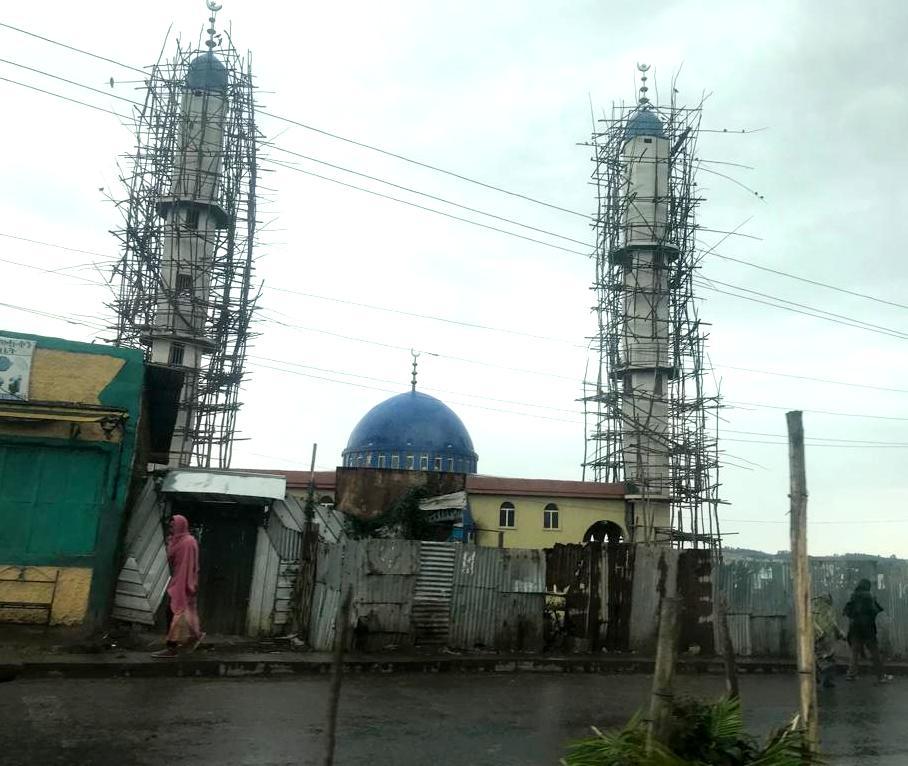 These rather precarious man- made scaffolding are to be found in the smaller rural towns.
This was taken in Debark where we stayed overnight
en route to the Simien Mountains. 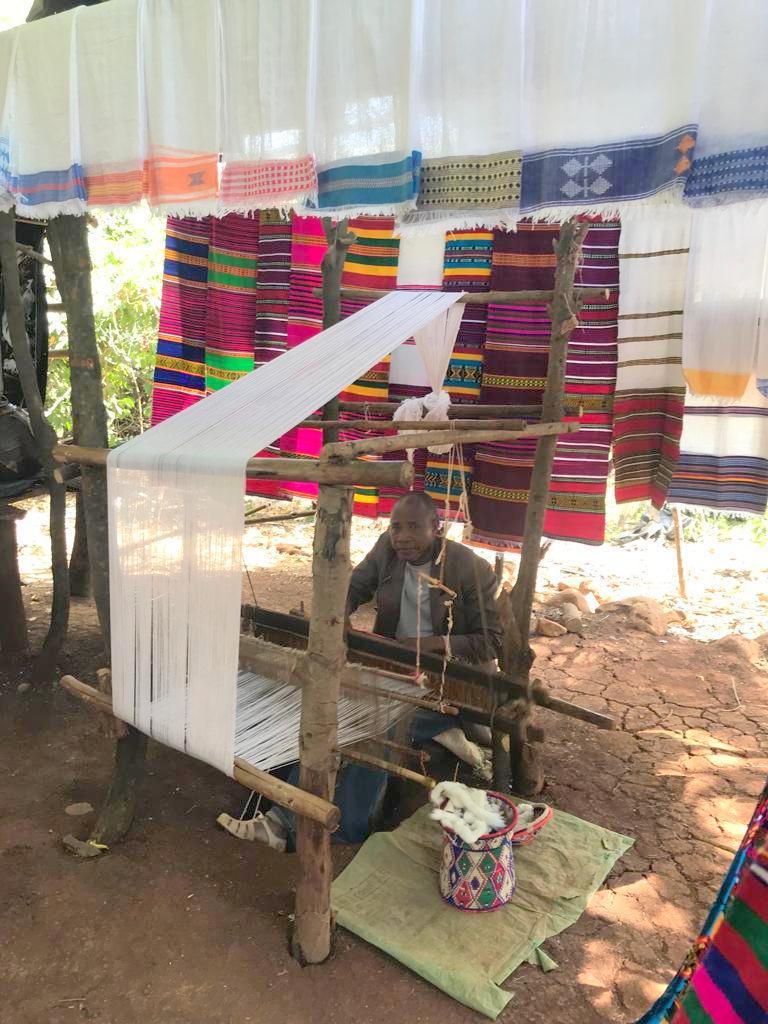 Scarves and shawls traditionally done by the men who do the weaving,
which I found unusual. 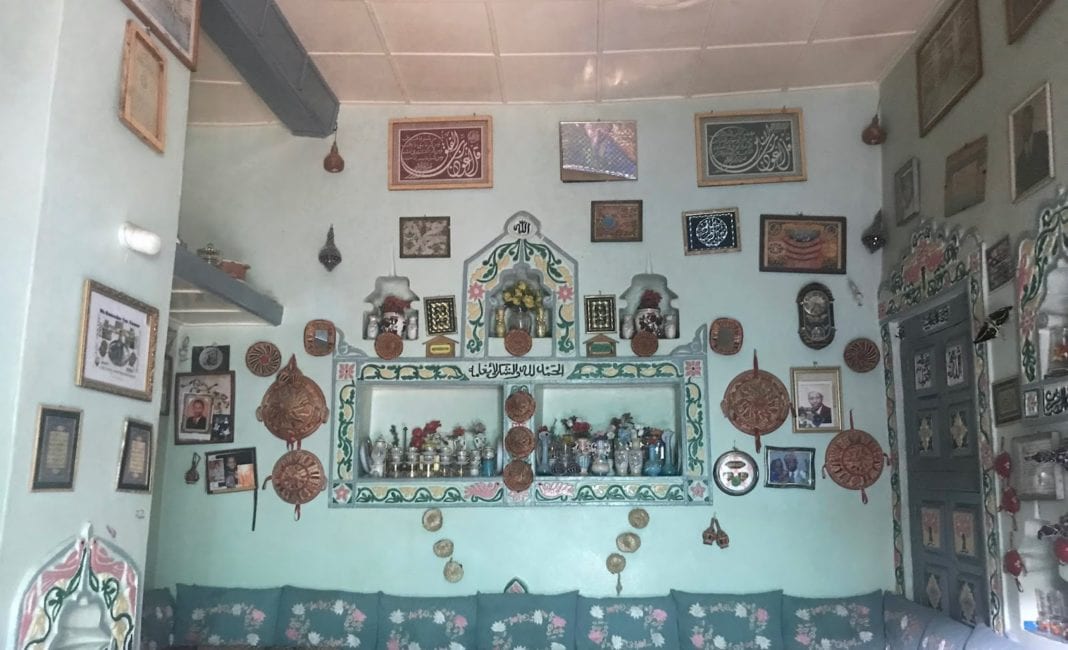 A traditional Harari home in Harar.
Harar is  the 4th most famous Muslim town  of the world.
It  is best known not only for its excellent coffee but also basket weaving.
The women weave various baskets from a young age
and they form part of their dowry.
These baskets are then displayed (and used) in their homes. 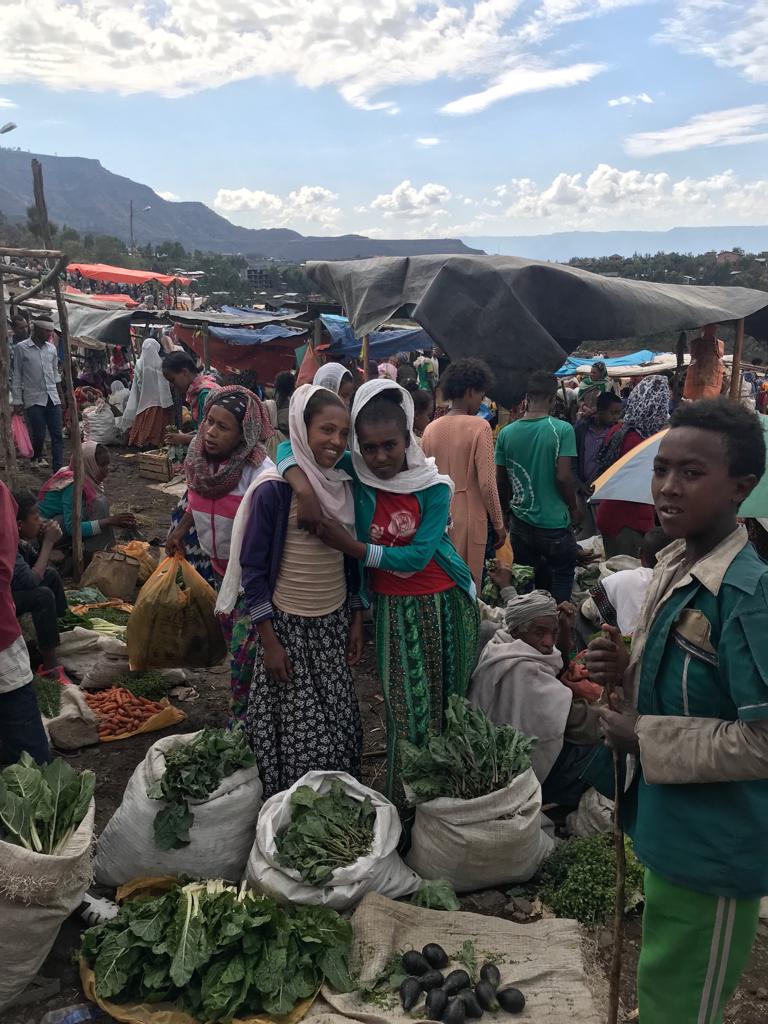 Saturday market day in Lalibela.
People walk for up to 30-40 kilometres for this
weekly event to trade and shop.
I found the people to be so friendly,
while trying had to make a living. 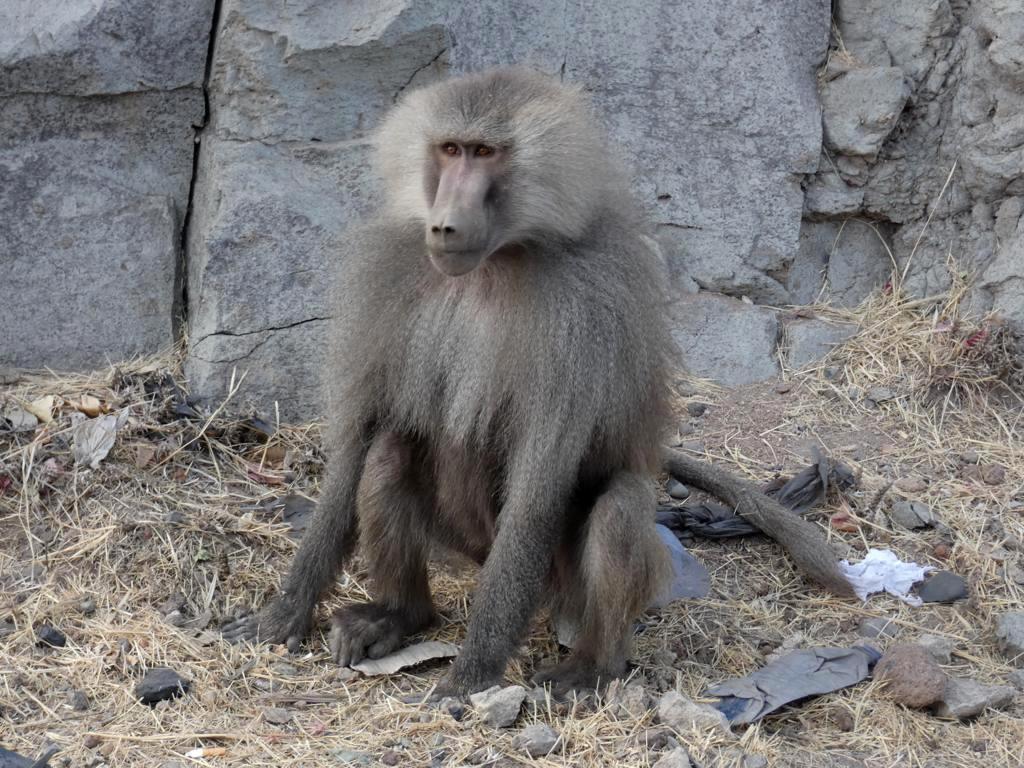 One of the baboons (Hamahydras) we saw at Awash National Park.
At Simien Mountains there is a different species of  baboons
known as Gelada  baboons and they are grass eating.
Ethiopia is, as I discovered, a topographically diverse country.
Awash is hauntingly stark, while the Simien mountains were similar to the Drakensberg. 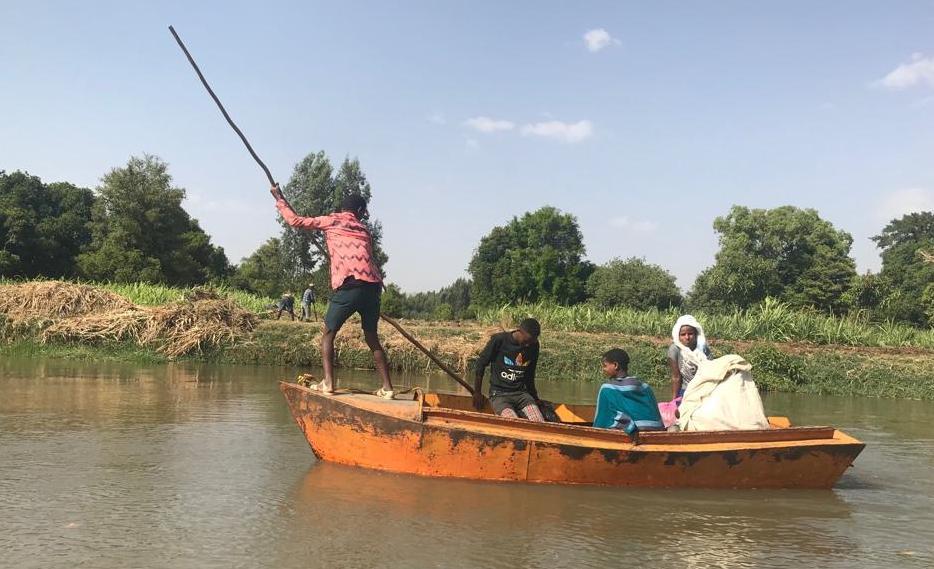 A boat crossing the river on way to the Blue Nile falls.
This is the mode of transport for many of the local people living in the area. 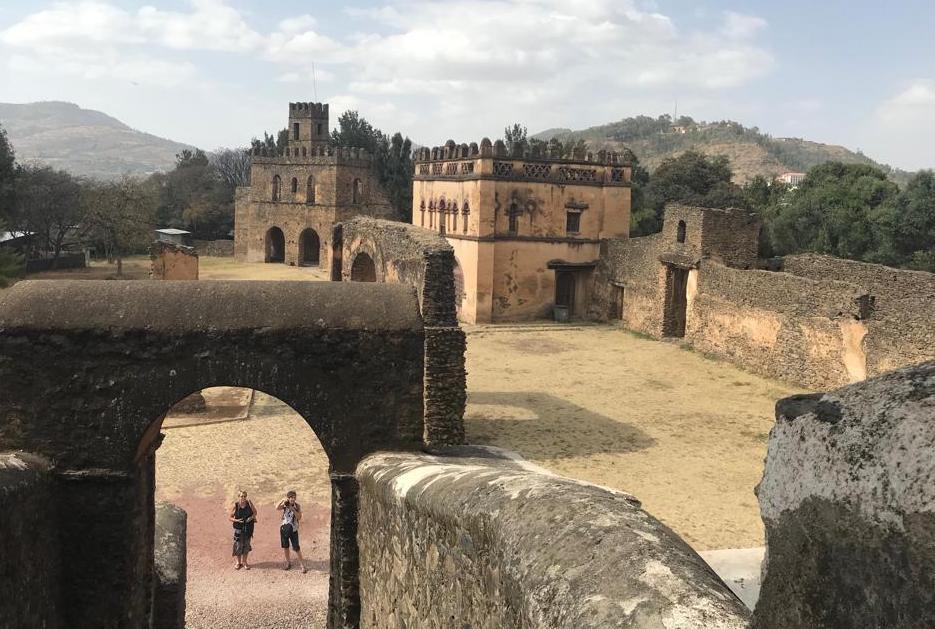 The kings’ castles complex in Gonder 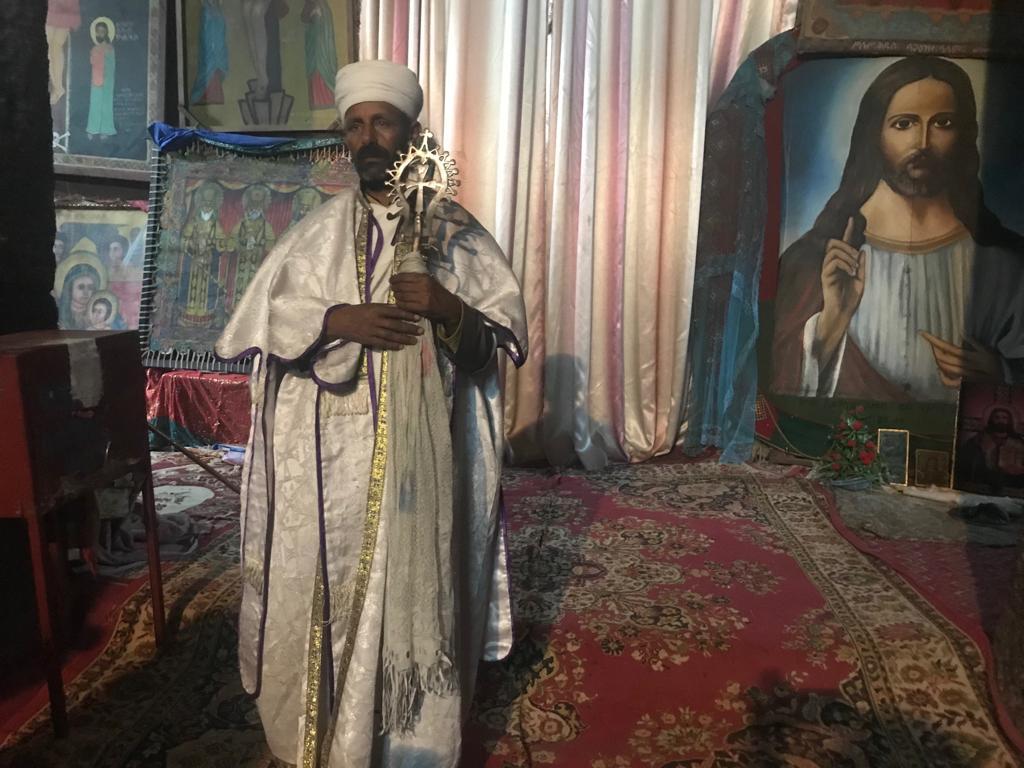 One of several priests we saw in one of Lalibela’s rock hewn churches.
There are strong Coptic and Semitic influences,
which made it hard for us to imagine we were still in Africa.
These Lalibela churches are advocated to
be the 8th wonder of the world and rightly so. 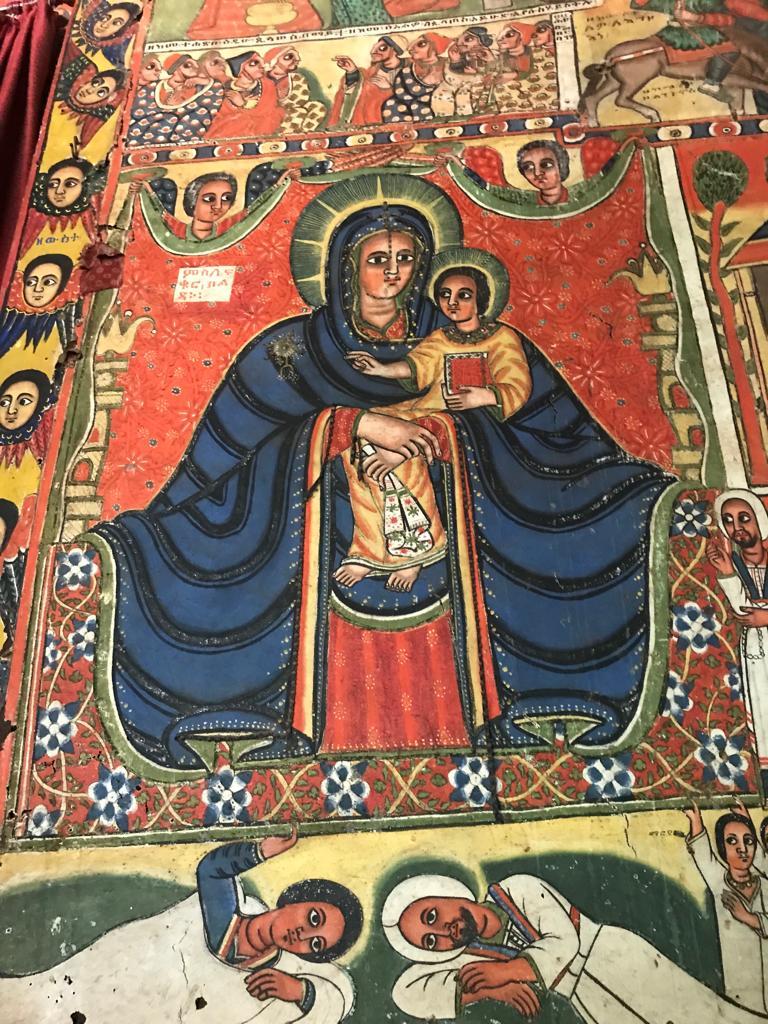 I discovered this extraordinary hand painted mural
in a monastery on a remote island sited in Lake Tana, Bahir Dar.
Just one of many that I saw and enjoyed.
Lake Tana is the largest lake in Ethiopia and
is full of islands with hidden monasteries. 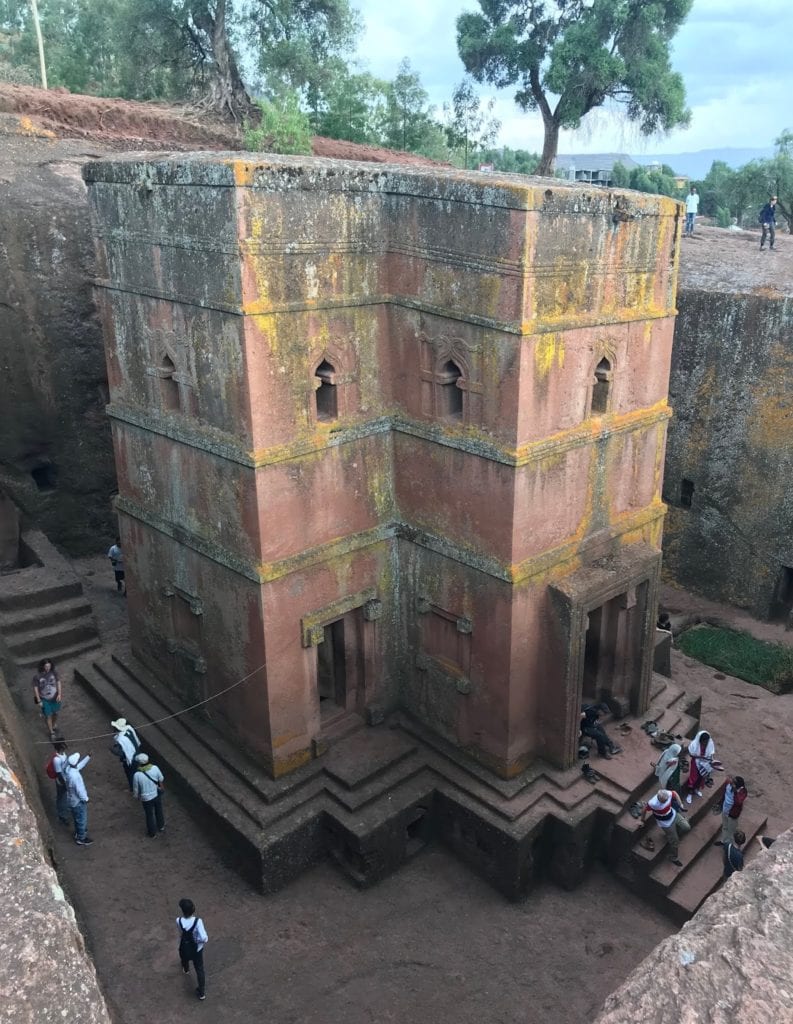 The best known of all the Lalibela churches,
the magnificent St George church .
I did not expect to see this extraordinary sight,
when it came into full view as I walked downhill.
The first thing I saw was  a flat monolithic cross in the ground ,
which turned out to be the rooftop of this church. 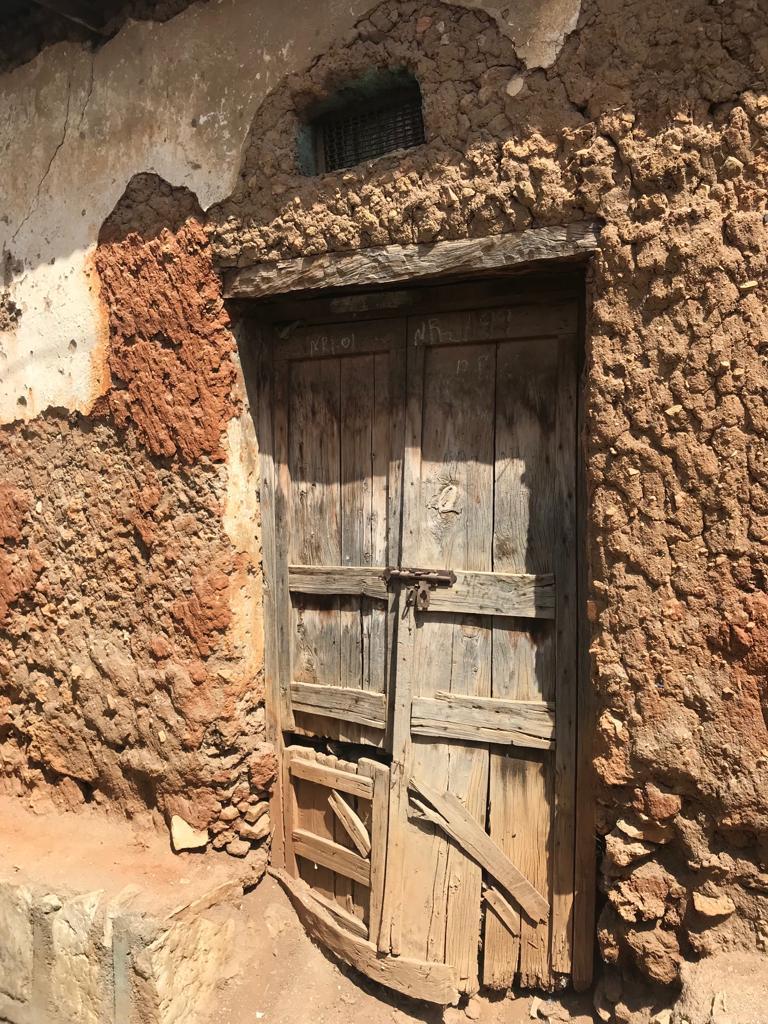 One of the many doors I stopped to admire during
my walks within the small towns I visited.
This was taken at Harar, east of Ethiopia.
Harar is also the site of visiting the hyena men at nighttime!
Wild hyenas come out to forage and the men feed them for the tourists’s benefit. 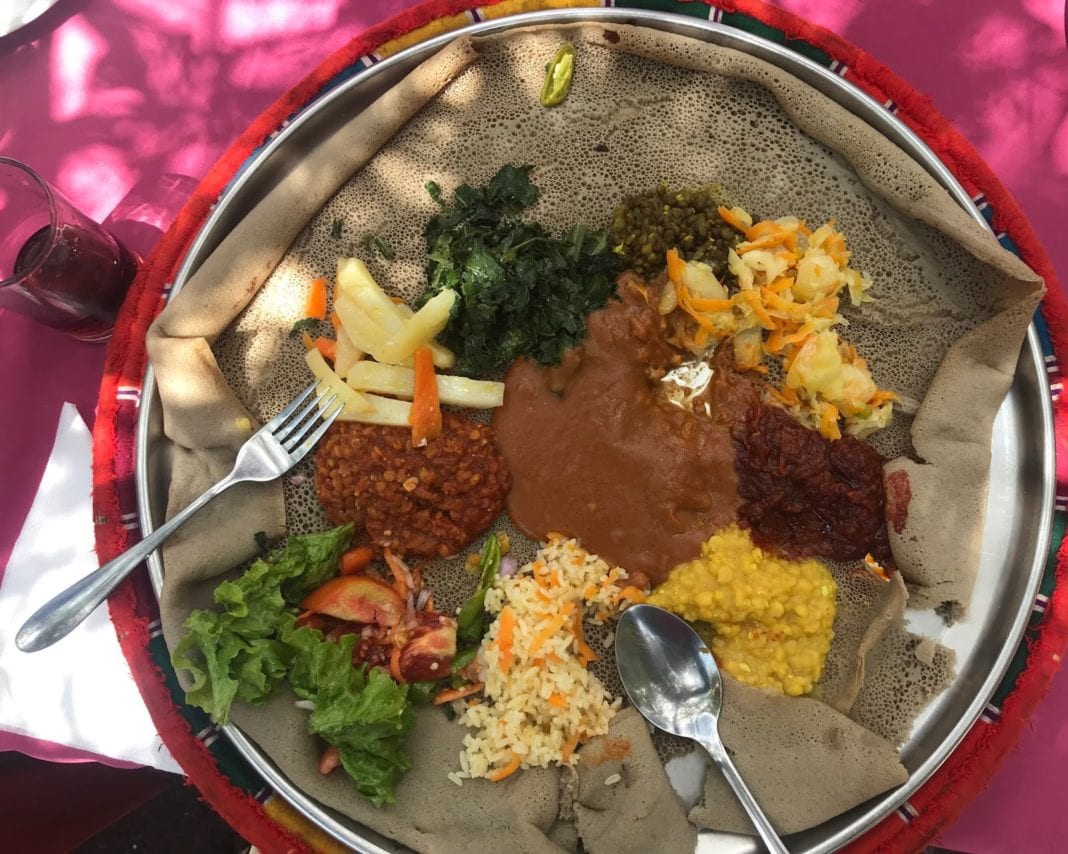 Traditional food… yum .
The injera (pancake) is the staple and  is made from the teff grain.
The  batter is fermented over a few days
before cooking it over a fire in a pan.
It is supposed to be full of iron and minerals and is considered healthy.
I chose this vegetarian option of beans and lentils .
Injera for some is an acquired taste but I came to love it.
However for the sake of my stomach,
I had to limit my intake as it caused
my stomach to react unpredictably.
This, I was to discover, was an issue that
was covered in the guide books. 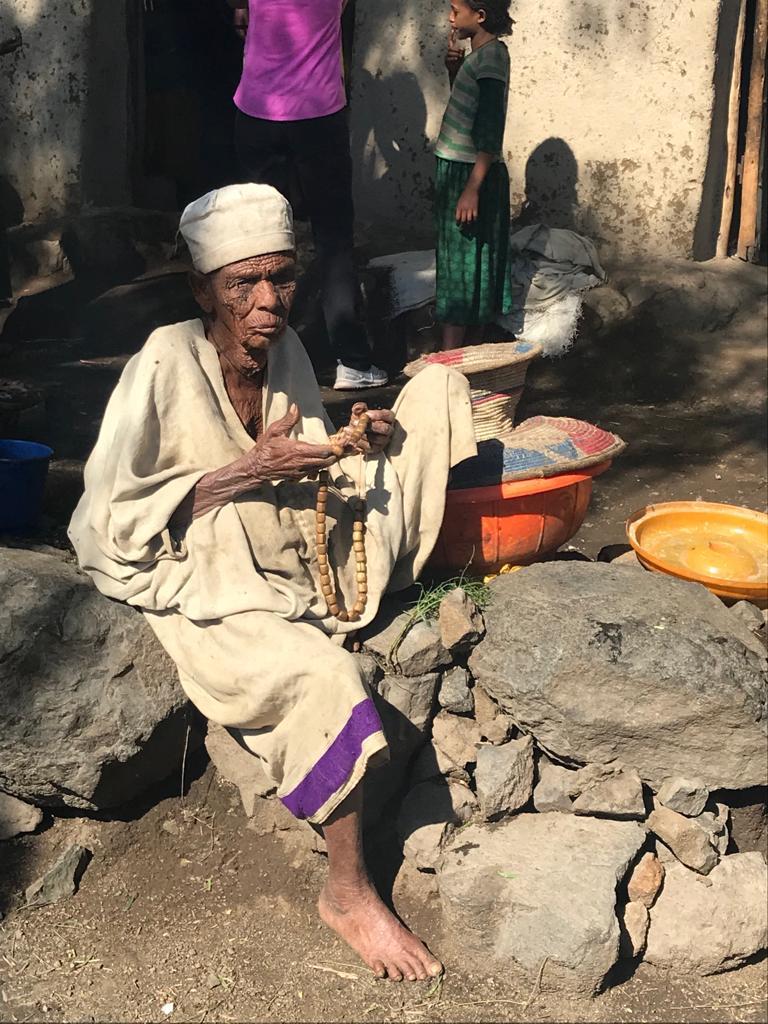 The average human lifespan is 65 years old old
but this village elder looks much older than that. 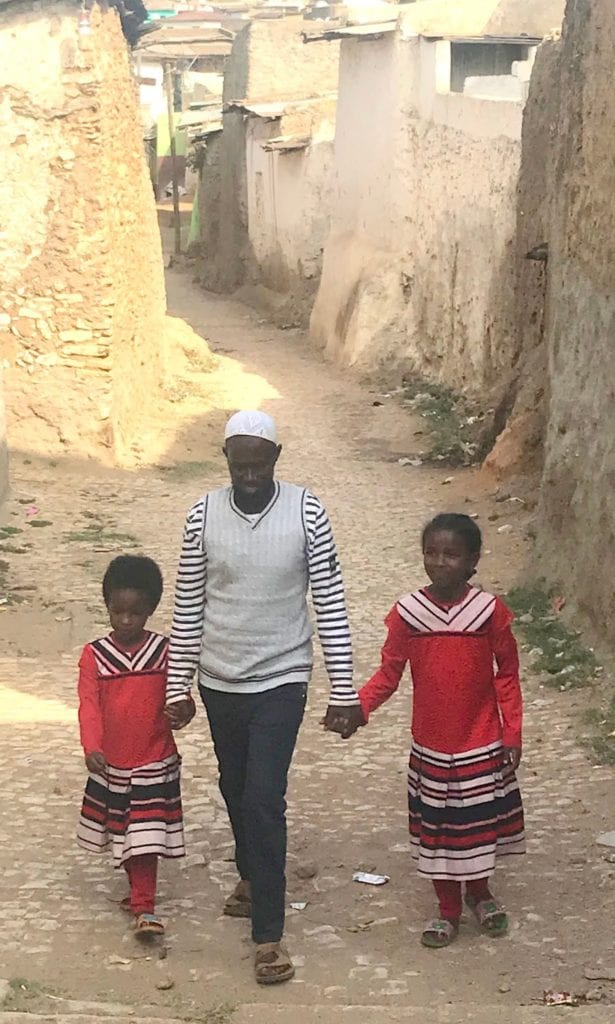 I just love this photograph of this family man
and his children,
which I took in the old town of Jugal
(World Heritage site) in Harar. 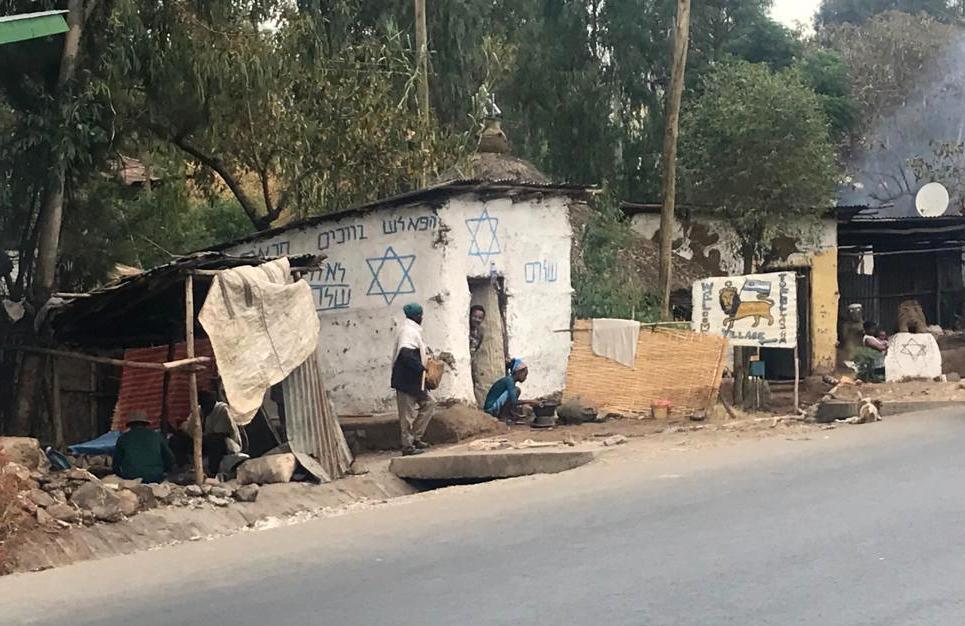 The so -called Falasha village just outside Gonder.
Most of the Ethiopian Jews were airlifted to Israel in the 1990’s.
I am told that that the Christian shop owners are enticing the tourists
with false claim to be the original Semitic people (Lost tribes). 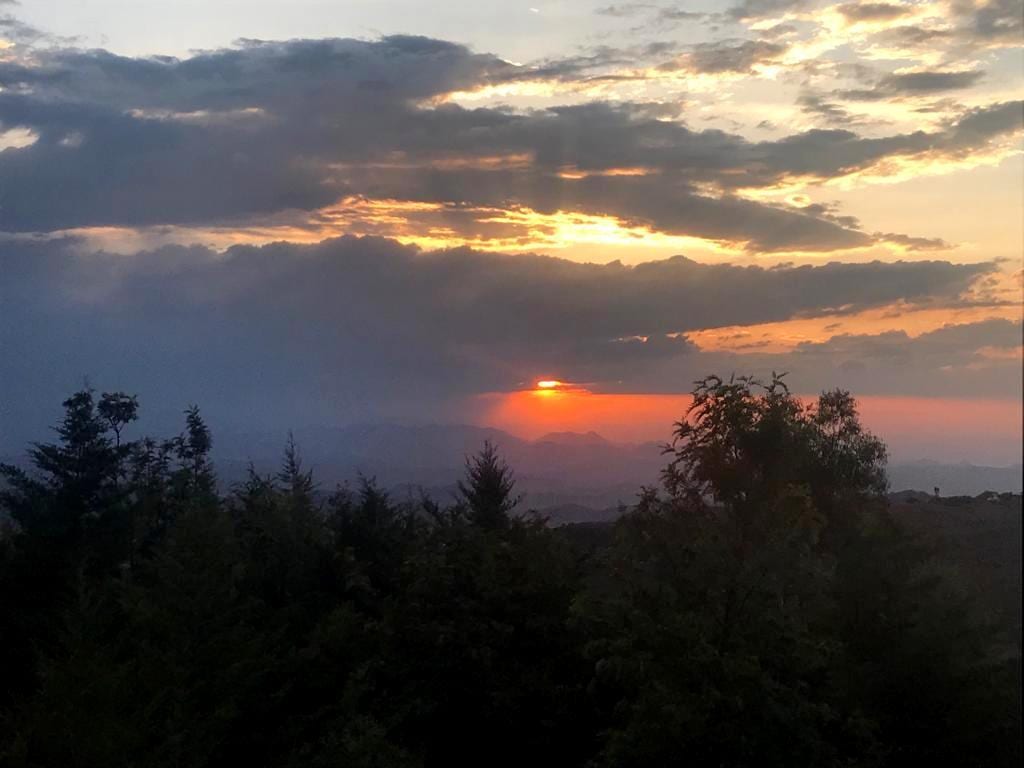 A sunset view from one of the hotels.
Accommodation (except for Addis Ababa)
is  basic and has a long way to go before
it meets modern tourist standards but I had no complaints.
Most of the rooms I stayed in were well maintained
and beds were very comfortable.
More importantly there was always
enough water to shower . 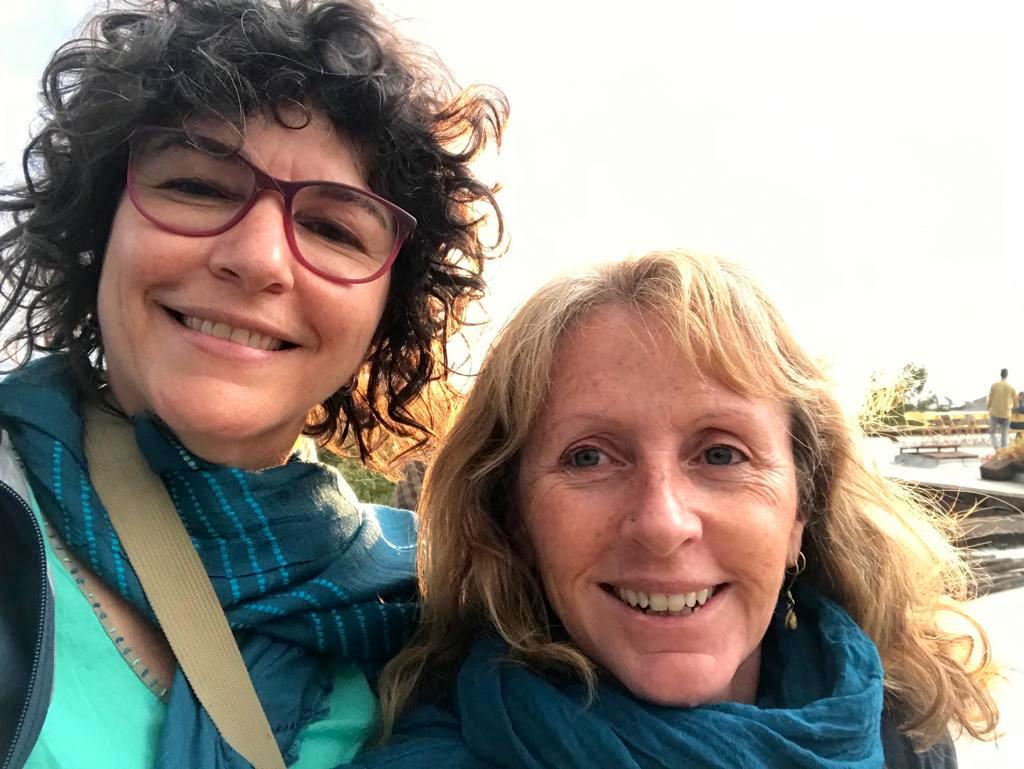 My wonderful tour leader and owner of the women’s only
tour group, Julie Paterson.
Thank you for creating this once off trip along with Firew Ayele,
who was an exceptionally well informed and entertaining tour guide.
For anyone who would like to find out about trips to Ethiopia,
Firew can be contacted through his own local company,
Across Abyssinia Tour PLC.
I am hoping to do Morocco  with Julie in 2020. 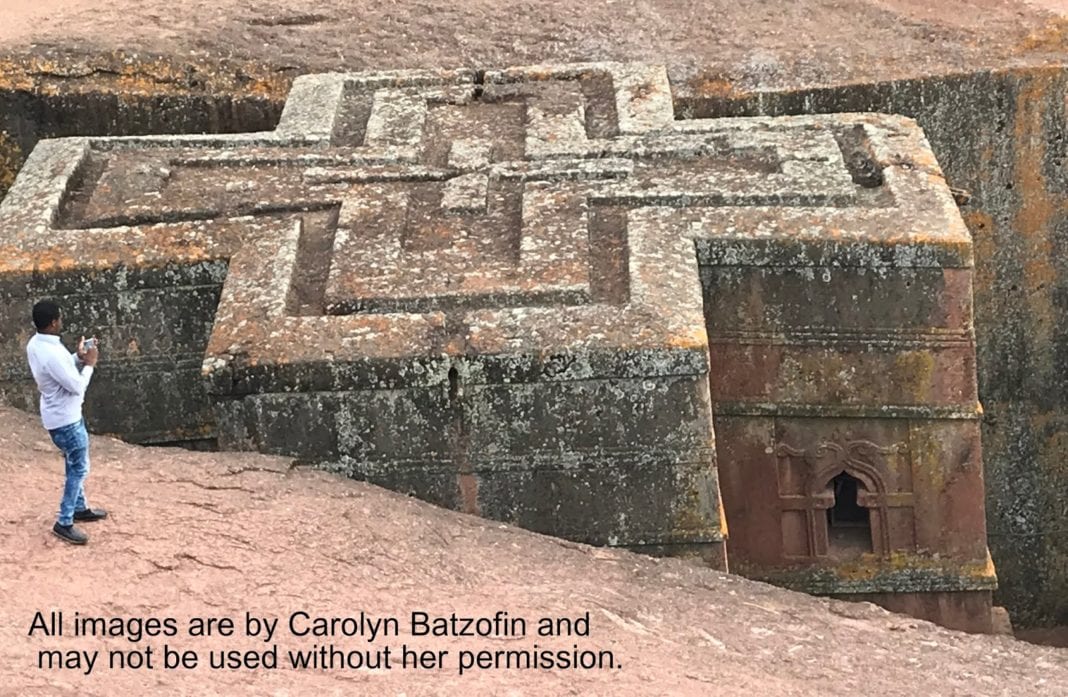 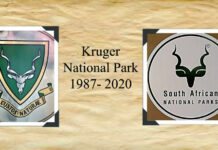 Kruger and the complex history of conservation and dispossession by Don Pinnock. 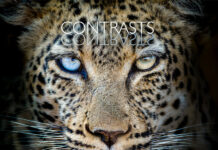 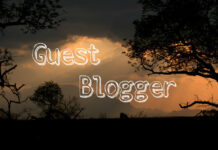 Sara Essop, of In Africa and Beyond, is my Guest Blogger for January.