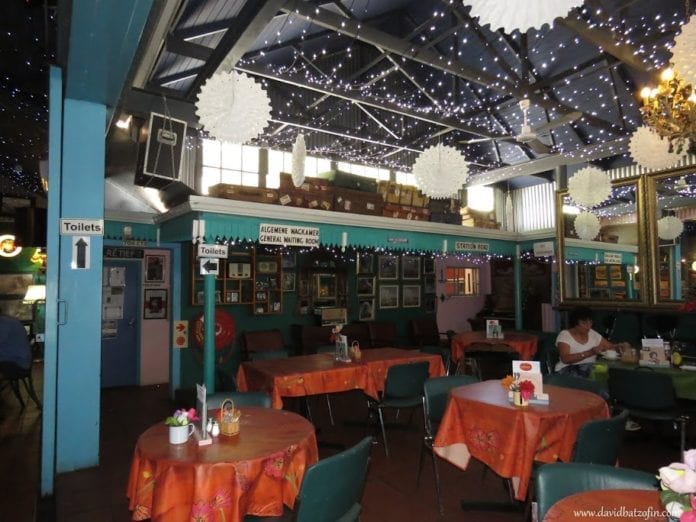 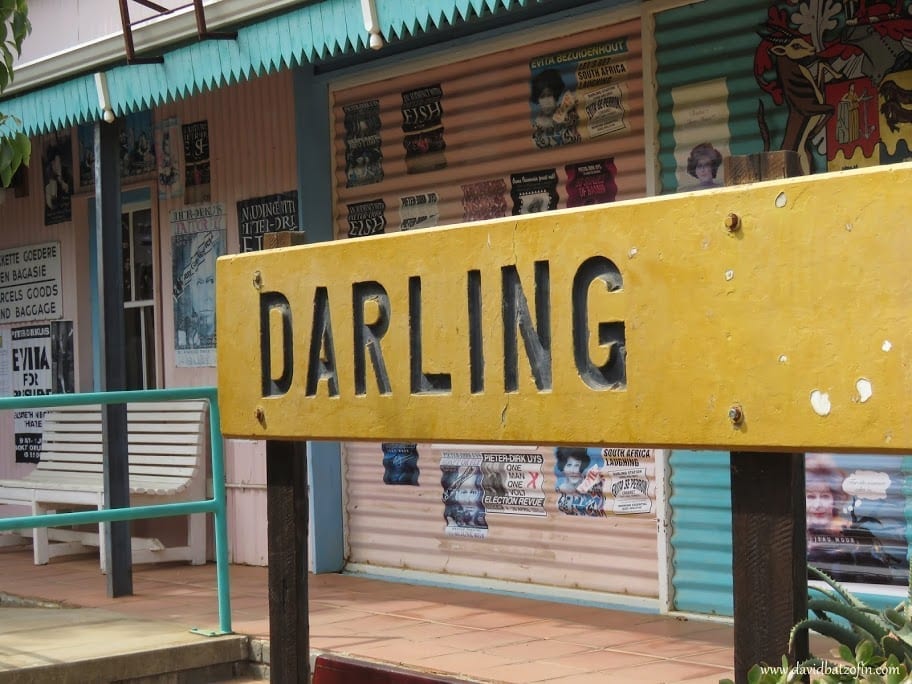 I have never been to Darling before…
It is about an hour from Cape Town,
so on a recent trip to the the Mother City,
my daughter and I went to visit.
Our first port of call was the old Darling station that has,
for the past 20 years been a theatre and restaurant.
The aptly named Evita se Perron (platform in Afrikaans) 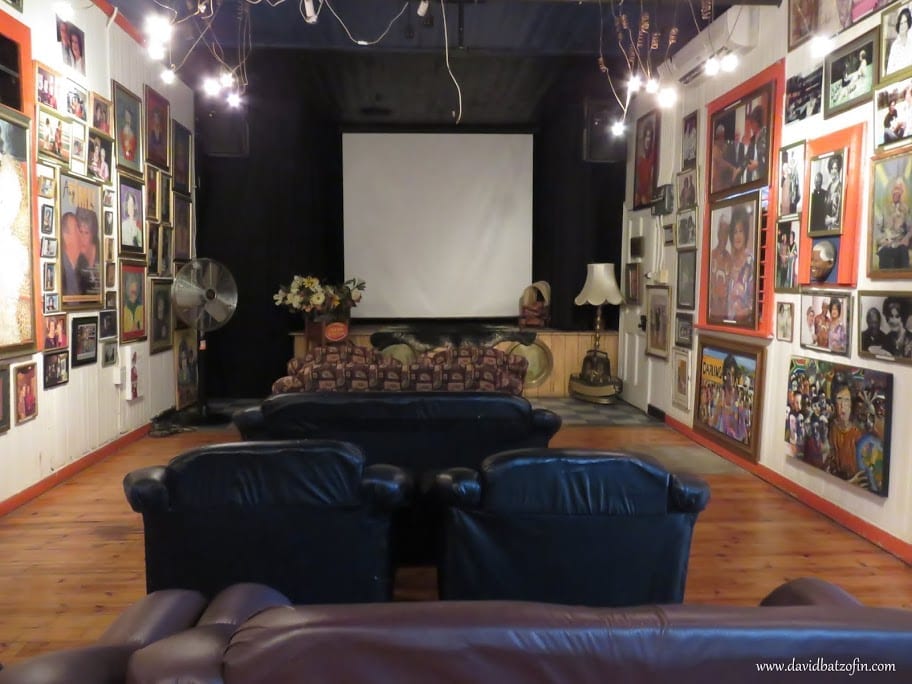 Mrs Evita Bezuidenhout,  a white Afrikaner socialite
and self-proclaimed political activist,
opened the Perron in 1996,
just two years after South Africa assumed the mantle of Democracy.
Tannie(Auntie) Evita as she is lovingly known, also dabbled in politics pre 1994,
when she was the Ambassadress  of Bapetikosweti, a black homeland outside of  Johannesburg.
This was the original theatre area…
Seeing that the space around this has opened up over the years,
it is difficult to comprehend the beginnings of this venture and how it almost failed. 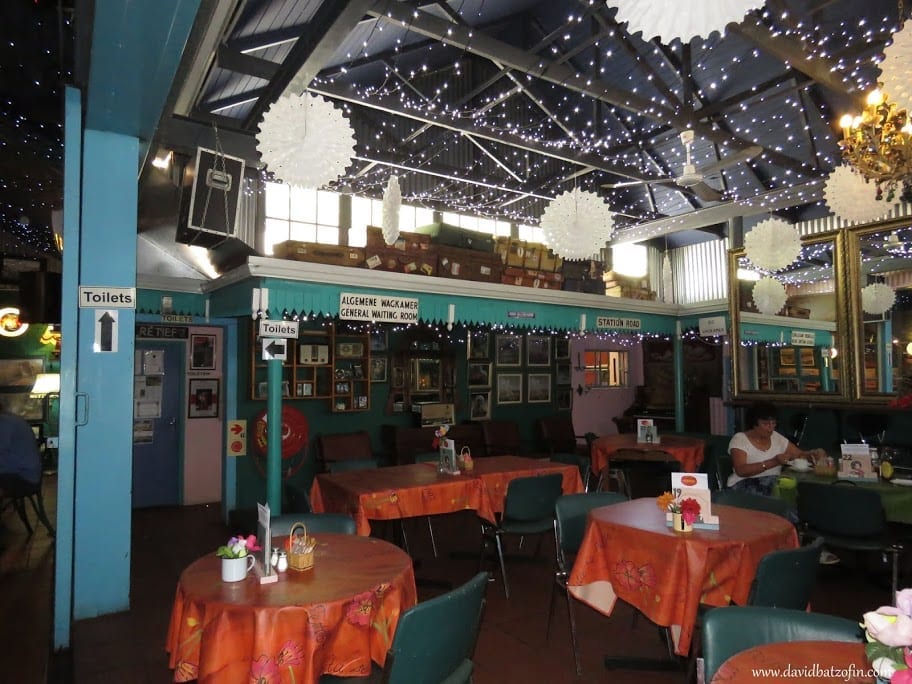 This is the “new” theatre and dining area. 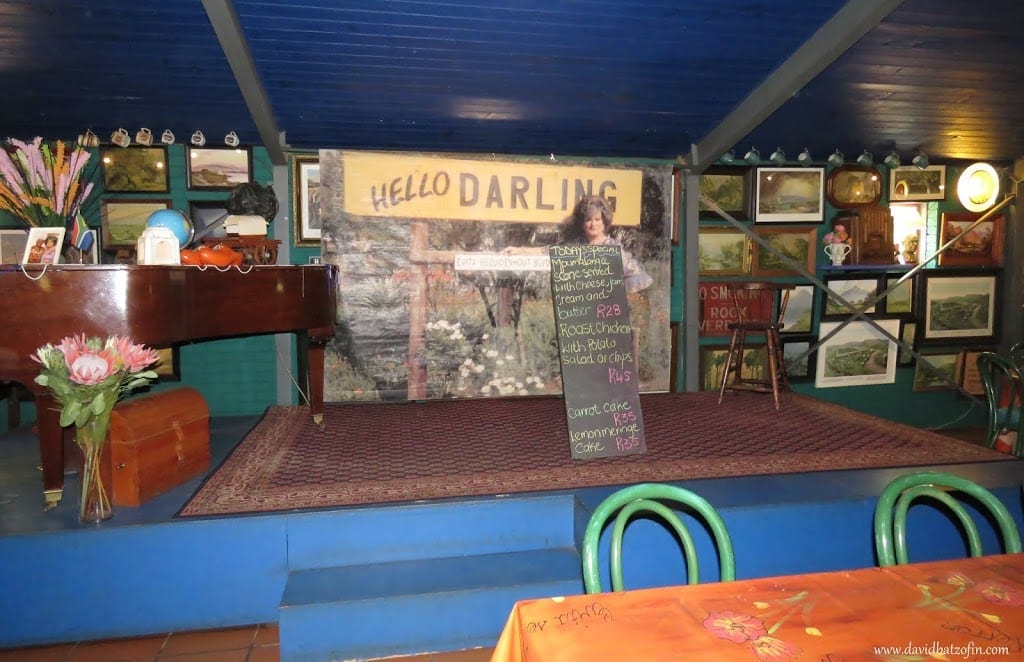 Look carefully and you can see the owner of this establishment,
Mrs Evita Bezuidenhout hiding behind the blackboard.
Well, not the REAL Tannie Evita, just a cardboard cutout. 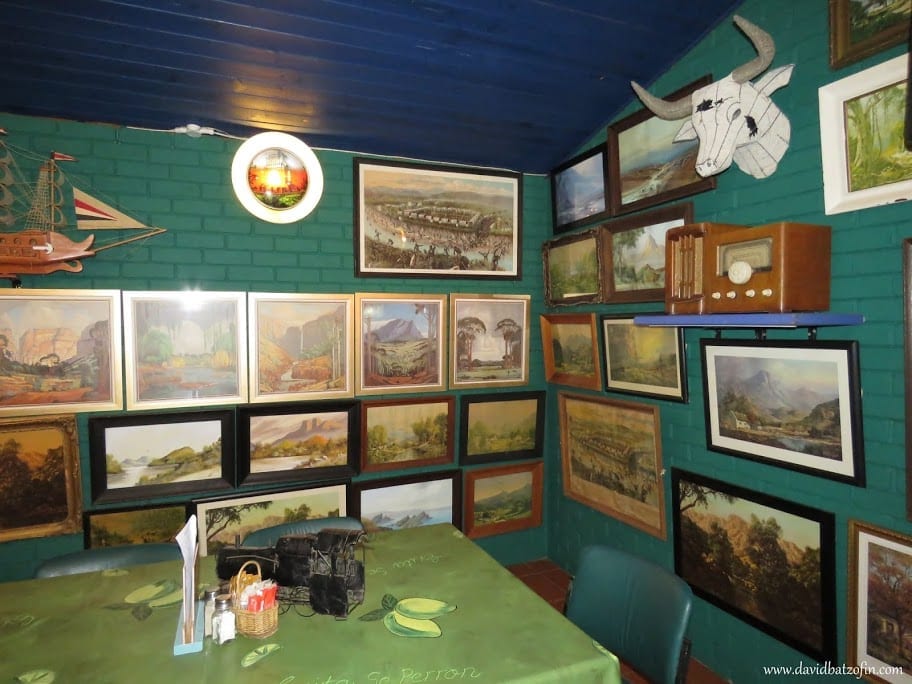 Every nook and cranny is filled with memorabilia of some sort 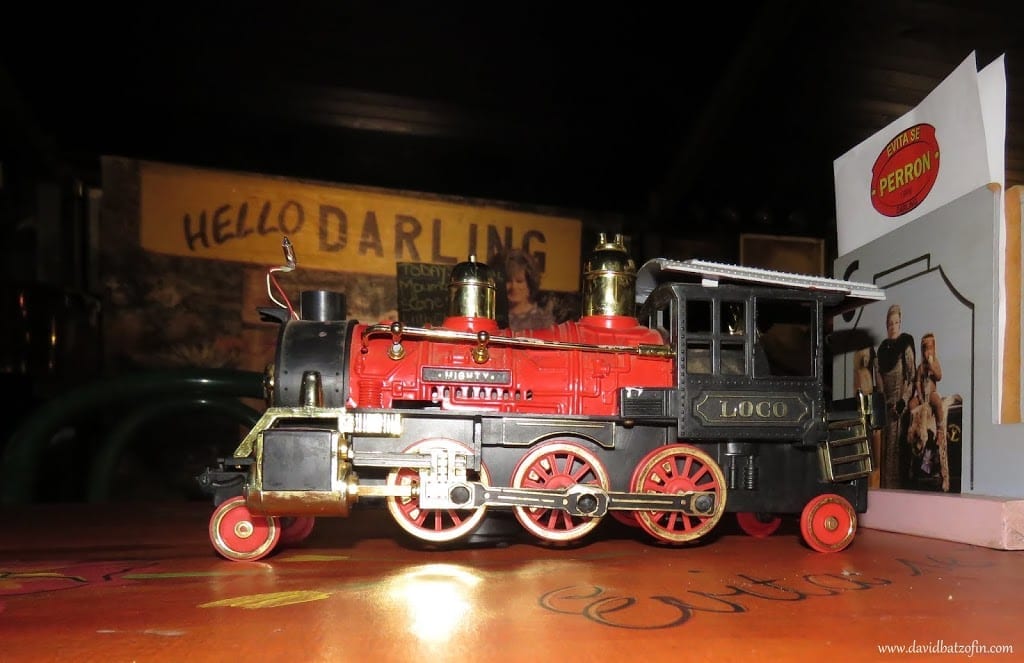 Seeing that this used to be a station,
this engine is appropriate.
While we were enjoying a cup of coffee,a train did rumble past. 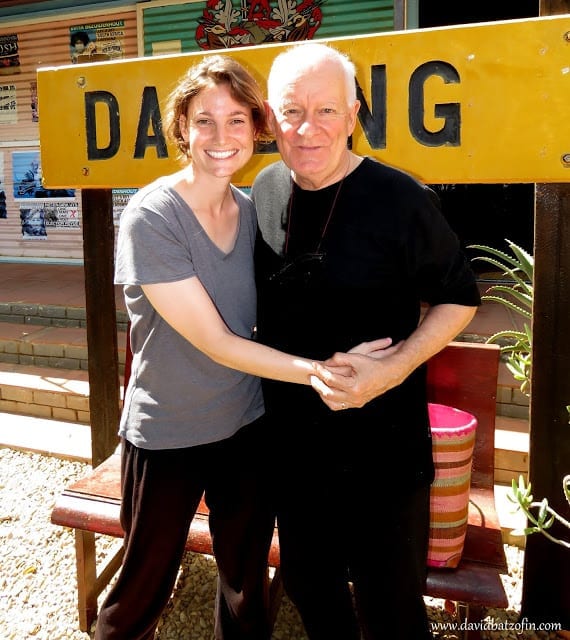 Although Evita was not in, we did bump into
legendary actor Pieter Dirk Uys who lives in Darling.
The two are not normally seen at the Perron together.

I was told that this is the most photographed cat in the WORLD.
It only has three legs as it was hit by a train,
but is seems to attract a lot of attention. 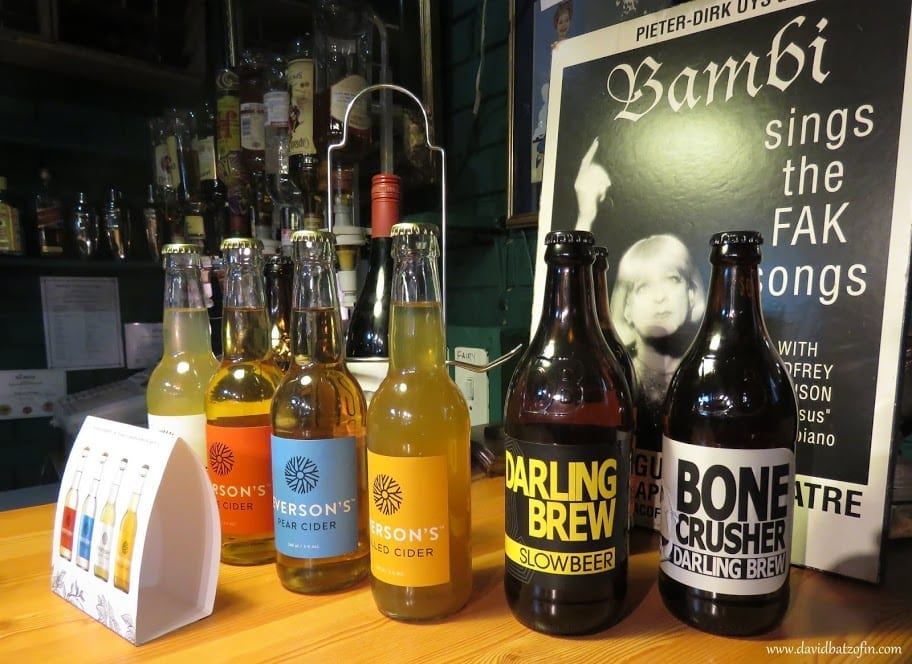 There is a craft brewery in Darling,
and these some of their products.

My lunch…to try and describe a boerewors (spicy sausage) roll
to someone who has never tasted one is almost impossible.
If you arr visiting, I suggest that you try one! 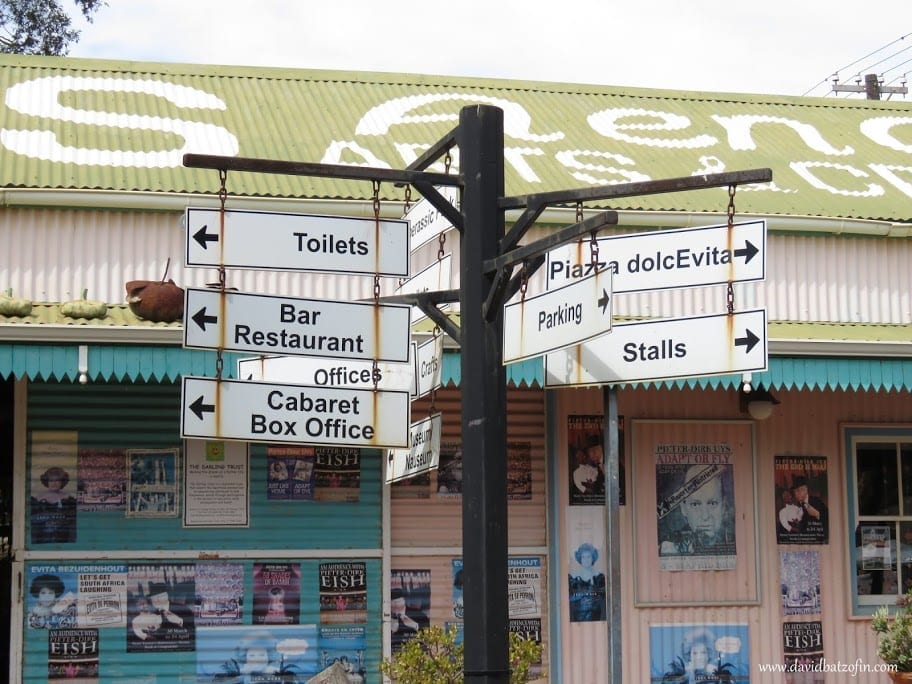 Some of the signage in front of the museum… 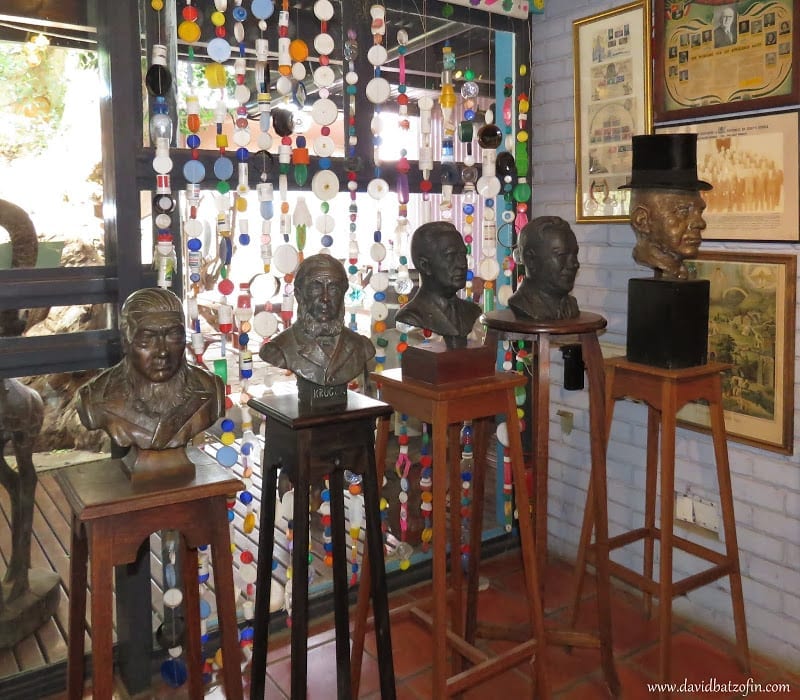 Because of the history that it contains,
Evita has named it the Nauseum! It is also home to the Arts & Craft Centre. 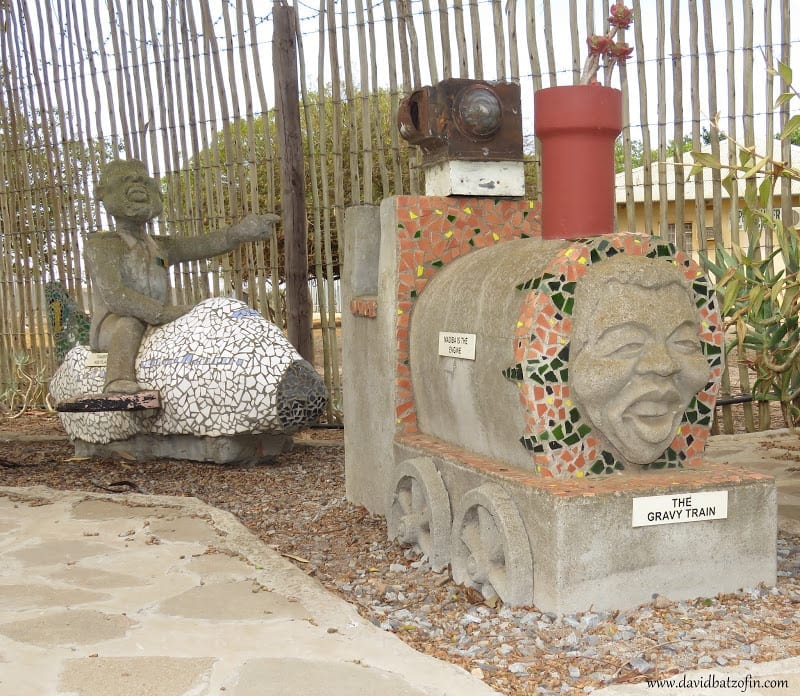 Out in the back garden visitors can fin Boerassic Park.
Here are sculptures that depict certain high( and low) points in our history 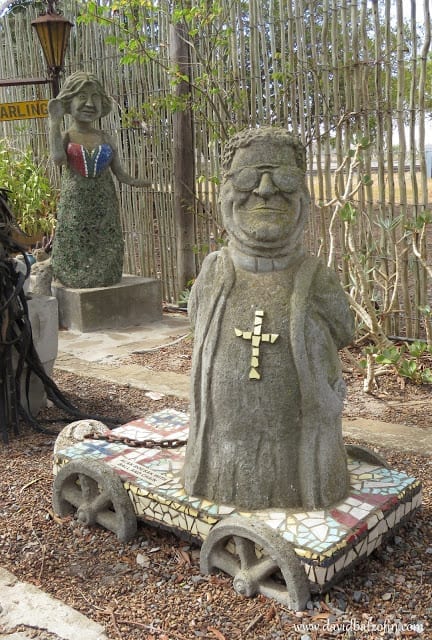 At first I wondered wny John Goodman was here.
Turns out that this is Rev Alan Hendricks,
well know for swimming at a “Whites Only” beach…
and in his underwear. 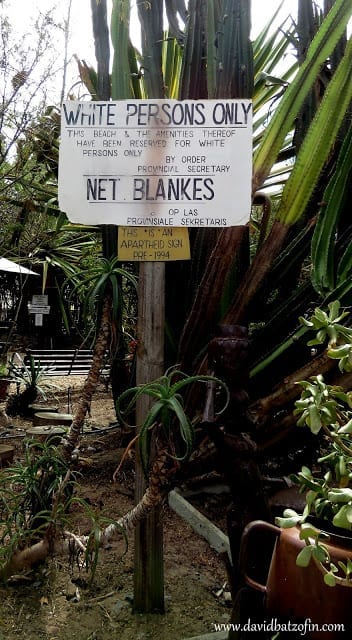 These signs call back a time in our history
that many of us would like to forget! 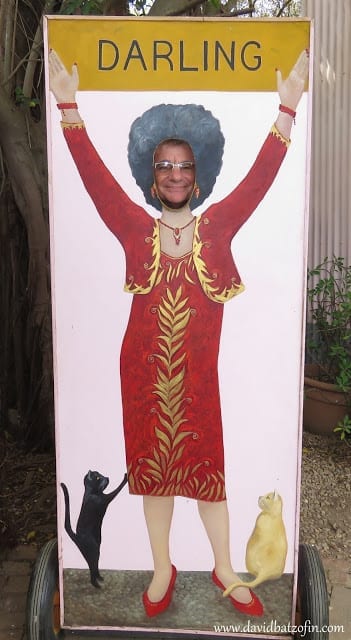 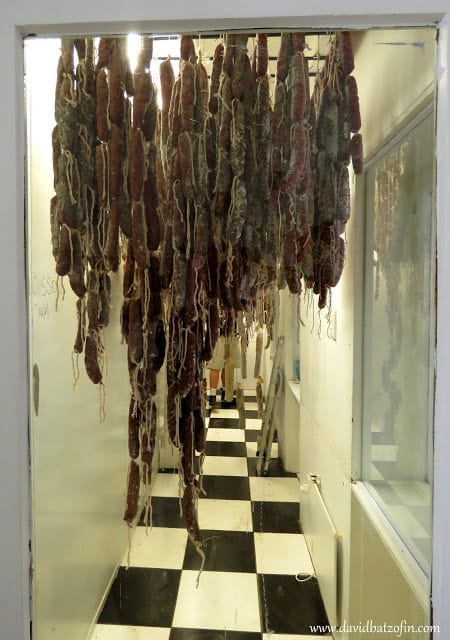 We finished off our visit with a visit to The Flying Pig.
As you can see, it was not flying but curing. 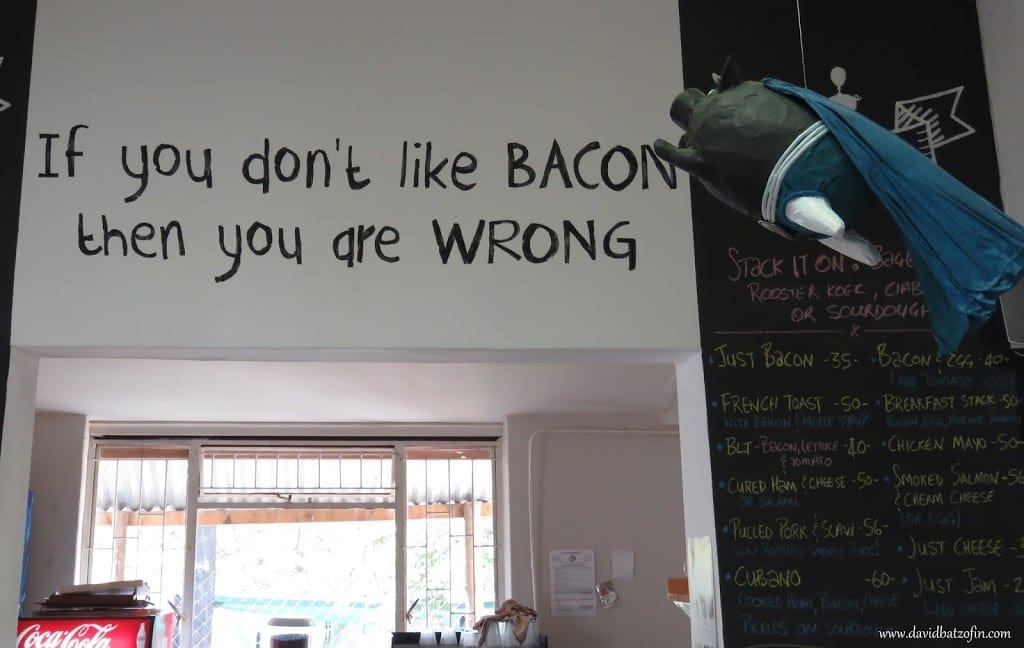 The sign says it all.
This shop offers a variety of produce made in and around Darling.
http://www.darlingtourism.co.za/the-flying-pig/ 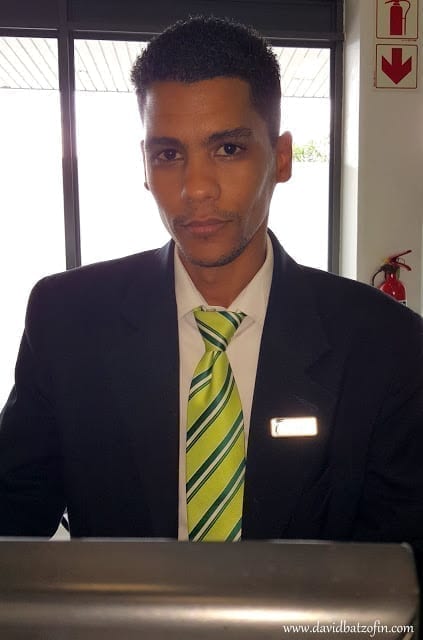 This is Faiz, who did all the paperwork at Cape Town airport.
In my dealings with this company to date
I have only met with friendly and efficient staff
who have a passion for their customers.
Based on my experiences over the past few months
and in three different cities, I highly recommend them
Europcar, the official car rental supplier
to “Travel & Things”
www.europcar.co.za
https://www.facebook.com/EuropcarSA 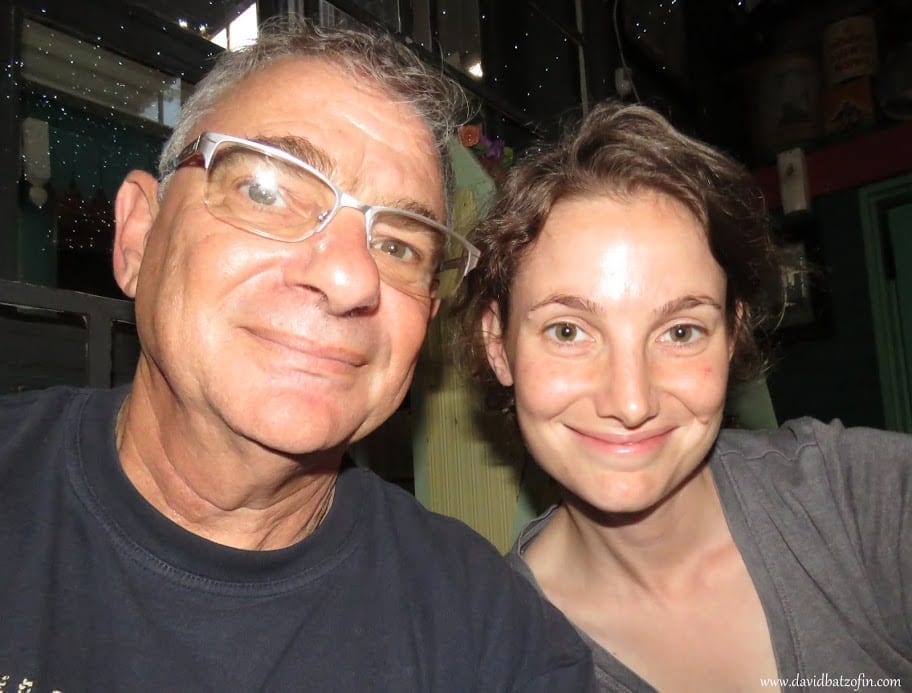 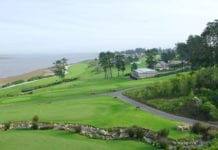 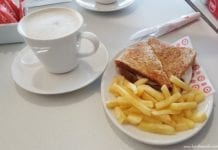 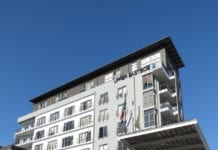