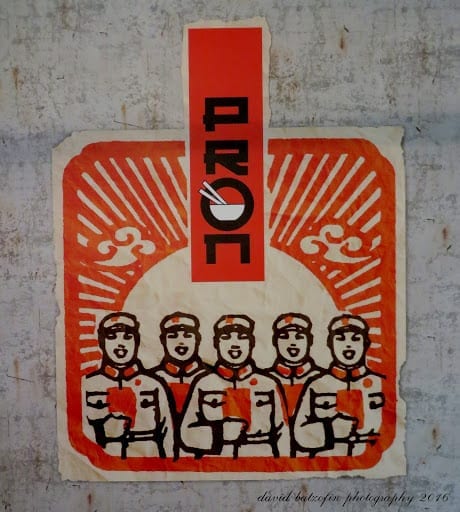 It has been several months since I first visited this establishment
in 7th Street, Linden.
It was shortly after it opened, and although I liked the food
there were teething problems. 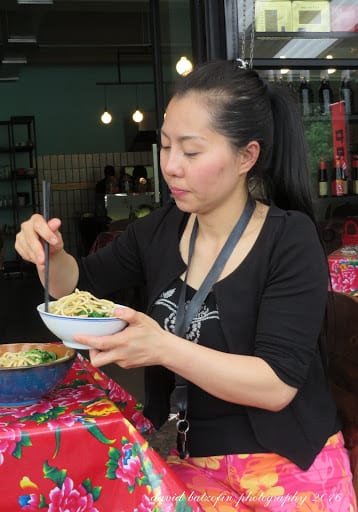 But manager Sue has changed all that!
She and her team now work like a well oiled machine.
Smiles all round and a staff complement that know each dish
and can therefore make educated suggestions to diners. 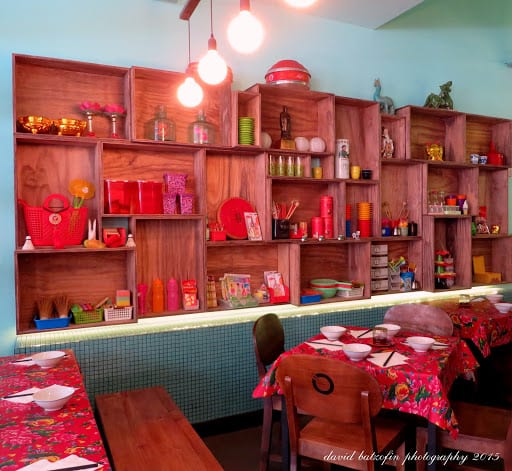 The interior is stocked with an eclectic mix of interesting items. 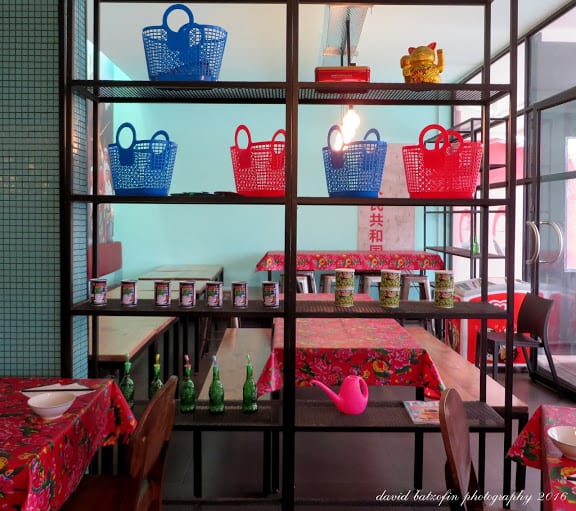 What was going to be a second restaurant in the adjoining shop
has been incorporated into PRON.
Giving increased indoor seating 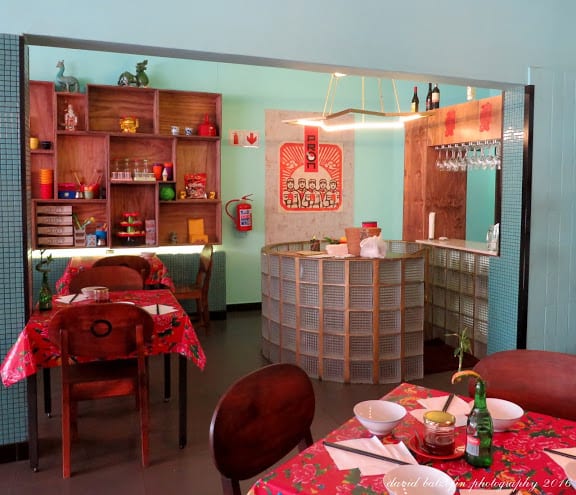 Behind the glass brick wall is a staircase that leads to a private dining room
that can be used for intimate dinners or celebrations. 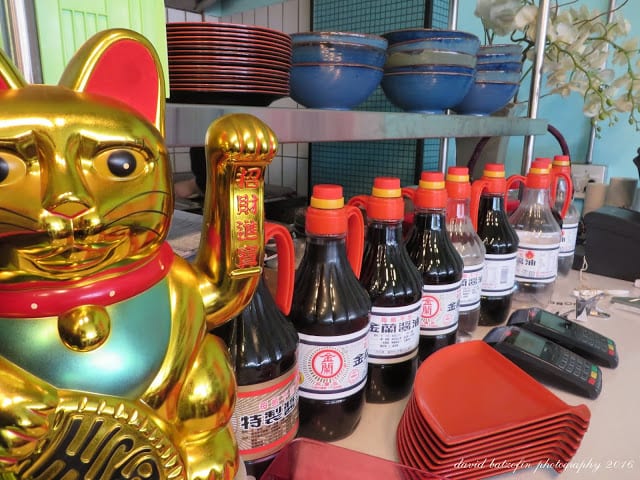 A lucky cat waves to visitors at the counter. 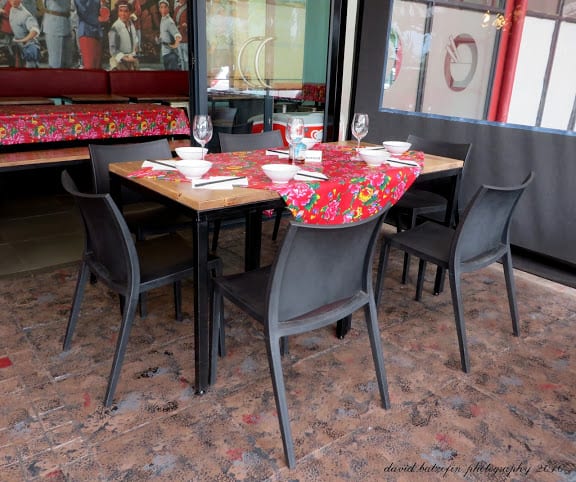 The decor is bright and vibrant, but that is NOT why
an increasing number of people are visiting…
They come for the eating experience 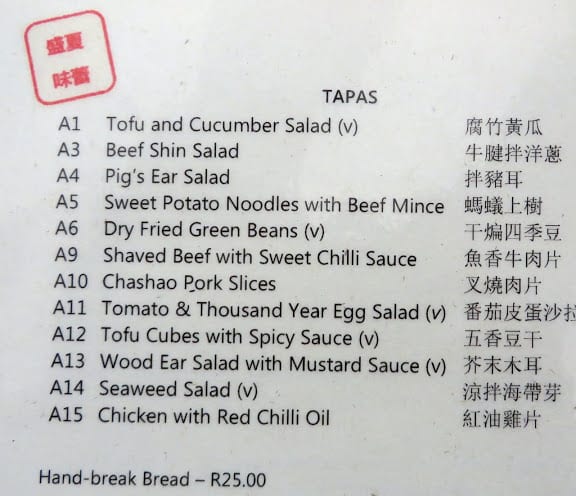 The menu is VERY different from the typical “Chinese” fare
that Western palates are used to.
But if you have decided to eat here, then you need to
leave your eating inhibitions at the door. 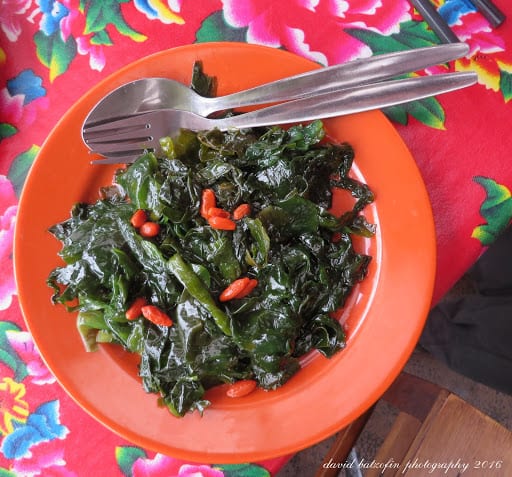 A Seaweed salad…
For some reason, I was expecting it to be a warm dish,
but it was not.
Interesting texture and flavour 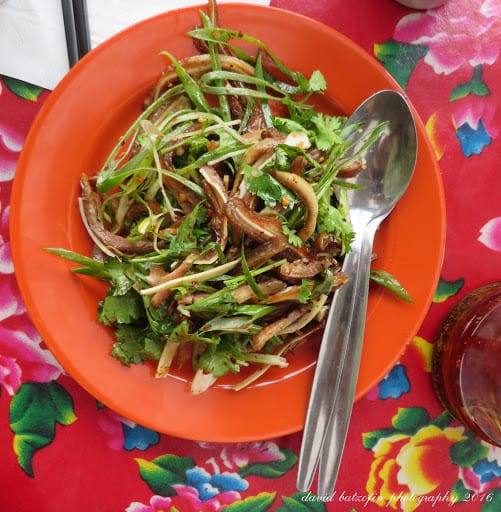 A Pig’s Ear Salad.
With real pigs ear.
I have had this protein once before and although it might
not be everyone’s “cup of tea” it is a delicious dish 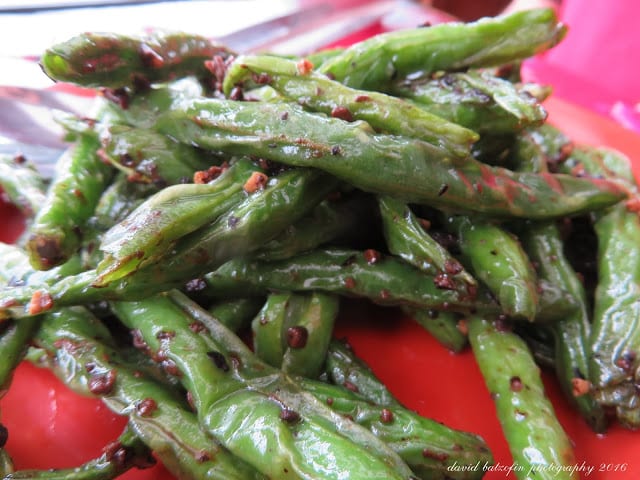 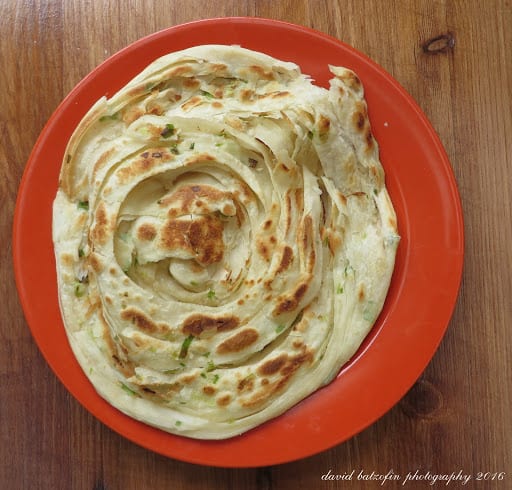 It might look like pizza or Naan
but it is neither…this is “hand-break” bread.
And very moreish… 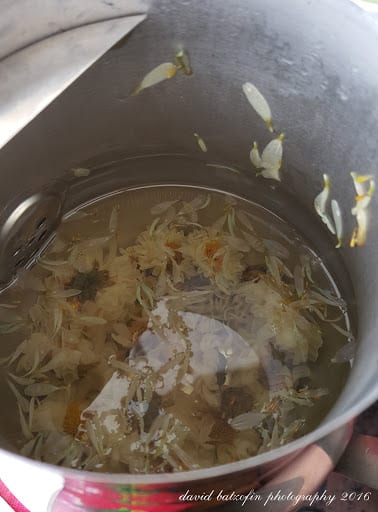 I originally thought that this was the “regular” Green Tea.
Turns out I was wrong.
It is an infusion of chrysanthemum flowers in boiling water.
Most  refreshing. 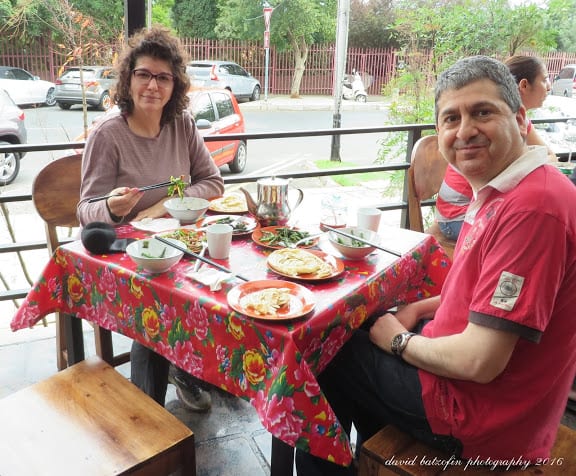 My wife, Carolyn and our host James. 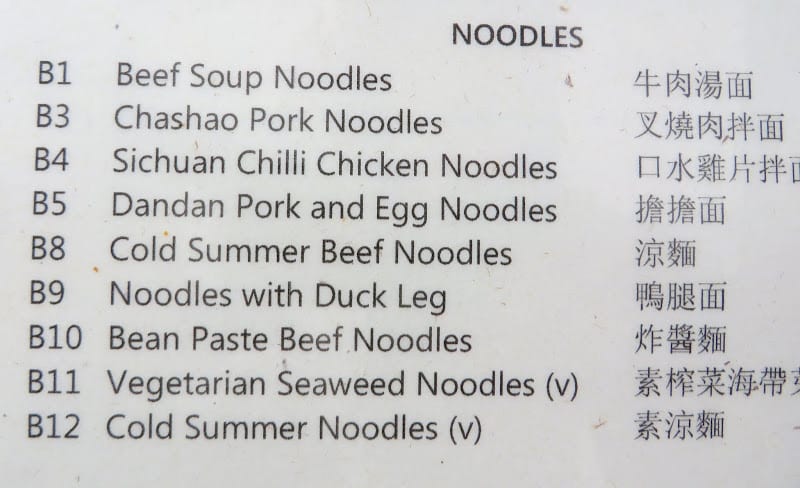 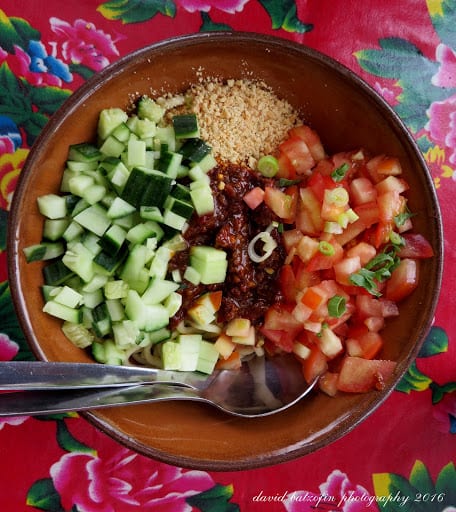 For the main course, my wife chose the
Bean Paste Beef Noodles.
The portion sizes for all the dishes are generous to say the least.
She had more than enough left over for dinner. 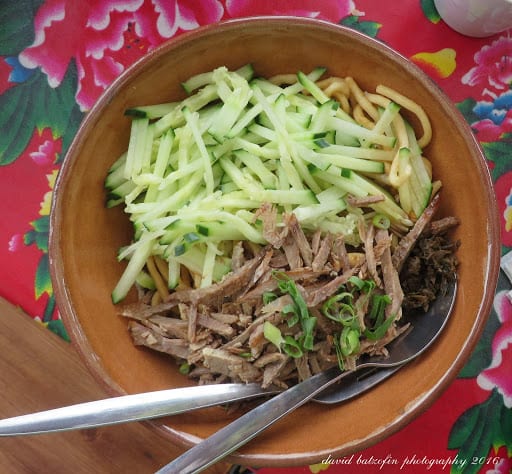 My choice, Cold Summer Beef Noodles.
Most Western palates expect noodles to be served hot,
but with this particular type of Nothern Chinese cooking,
they tend to be served cold. 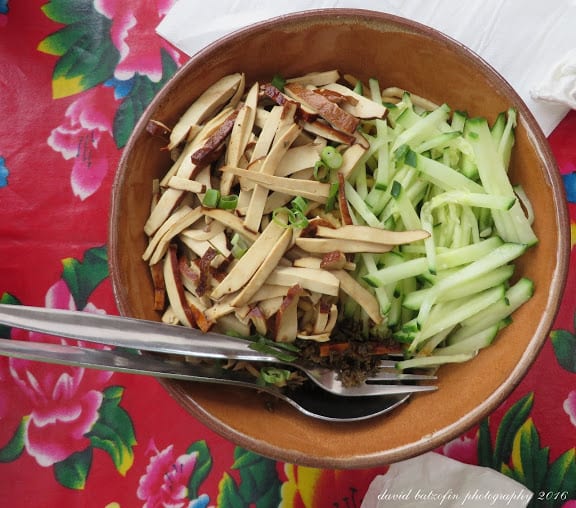 Vegetarian Seaweed noodles was our host’s choice.
It is one of the two vegetarian main dishes on offer 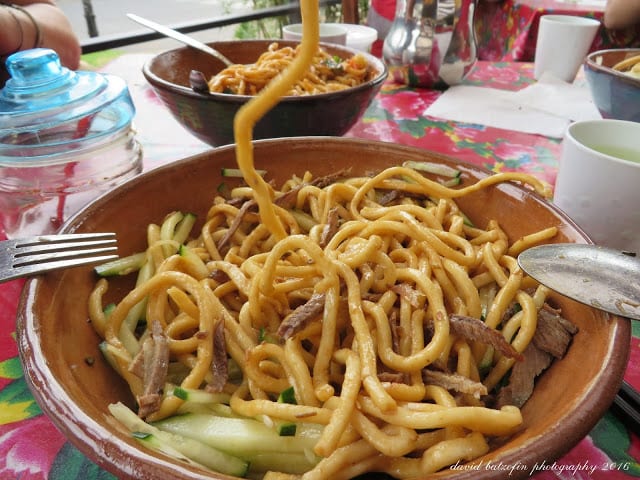 When the dishes arrived, there were no noodles to be seen.
They were “hiding” at the bottom of the plate and diners
toss the dish to mix all the ingredients.
Although chopsticks are recommended,
I did “cheat” and used a fork and spoon to make certain
that there was not a morsel left behind.
The noodles are all made fresh on the premises. 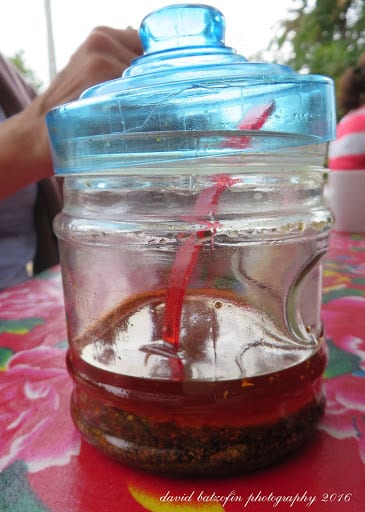 A home-made chili sauce.
Recommended by my wife, but I don’t like hot
so I did not follow her lead on this.
My verdict?
PRON might not be everyone’s “cup of tea”
and in a Western world where we perceive that all
Chinese food has to be fried and come with rice,
this is a delicious and different type of meal.
I suppose one, like me, has to be adventurous
and give it a try.
I suppose the question that needs to be asked:
“Will I go back”?
And the answer is an unconditional “YES”.

El Jalapeño in Linden. A touch of Mexico in the heart...