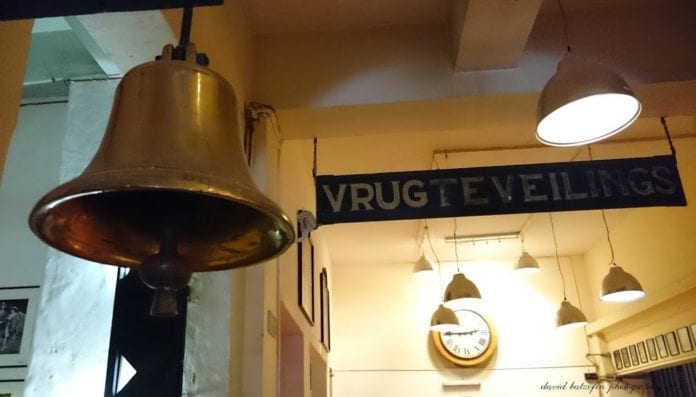 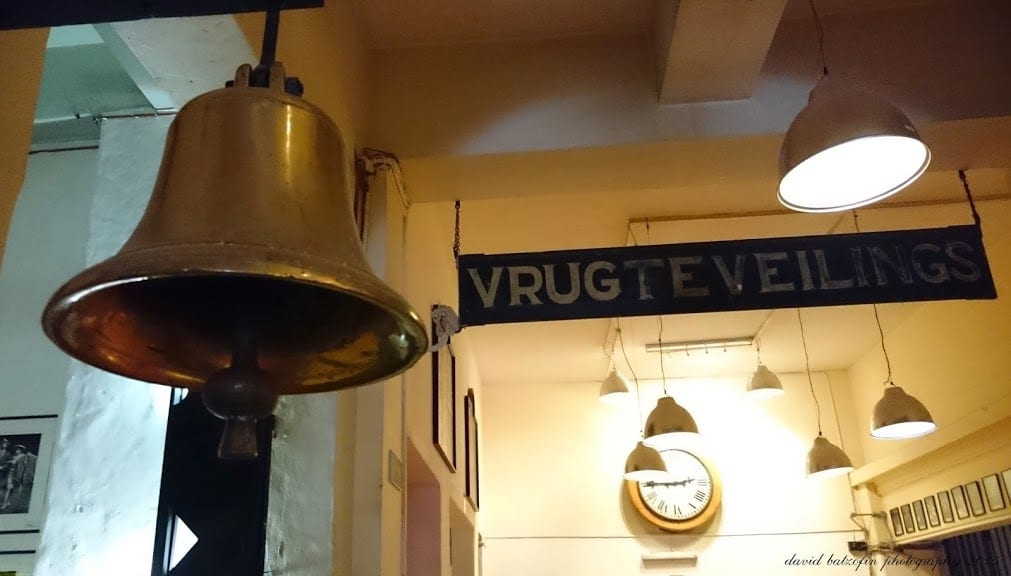 It has been a while since I last visited the Market Theatre
or for that matter The Newtown Precinct.
I rectified both earlier today. 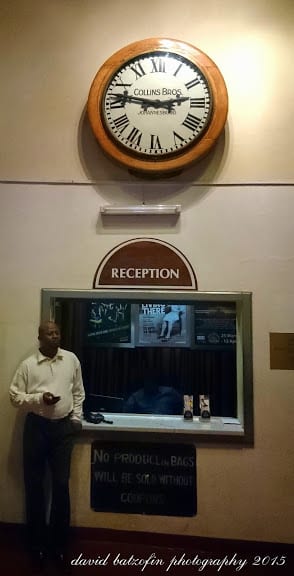 The reception area in the foyer of the complex.
Believe it or not…
the clock was showing the correct time.
Not just there for decoration. 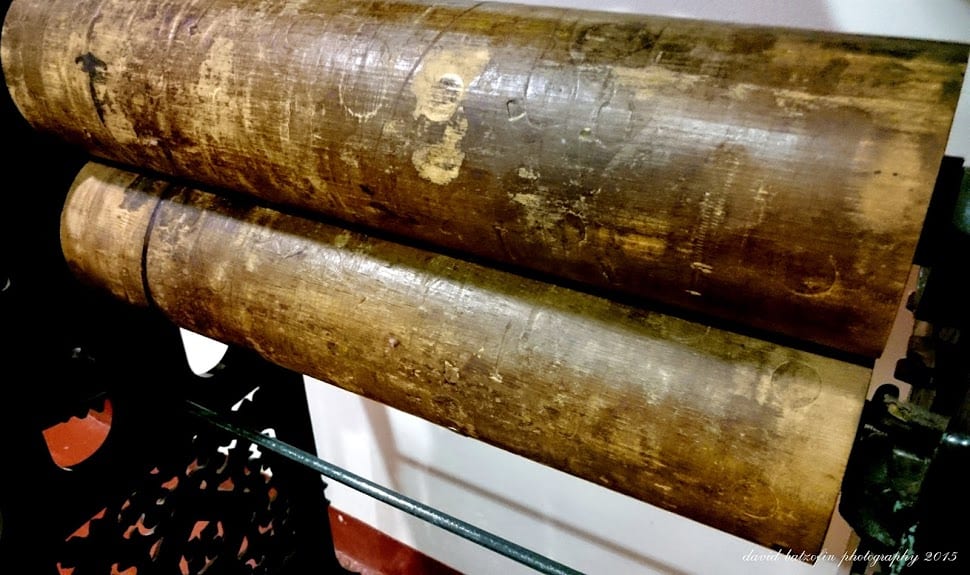 One of the many machines on display.
It would be nice if there were plaques describing what they are,
and what their purpose was 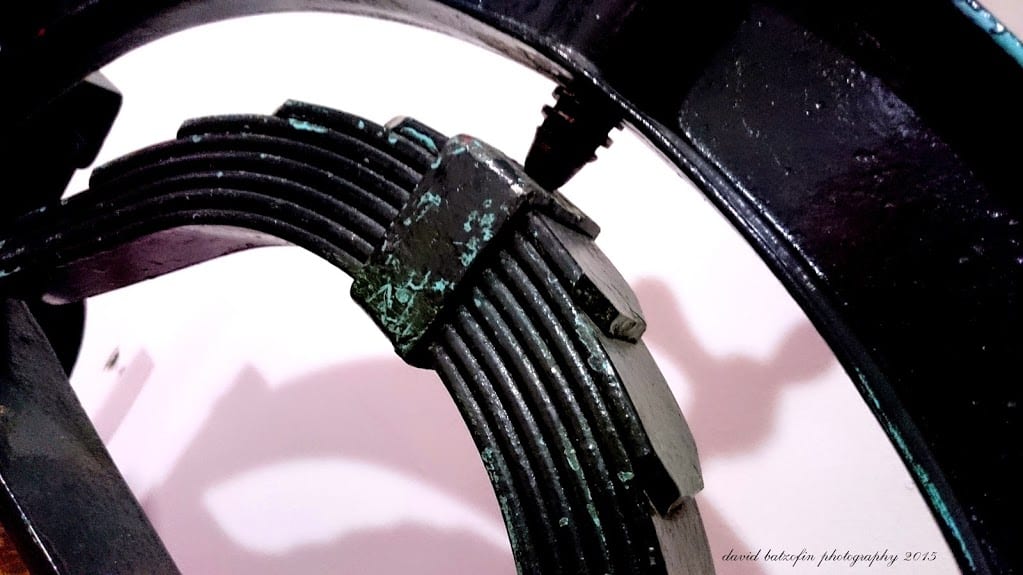 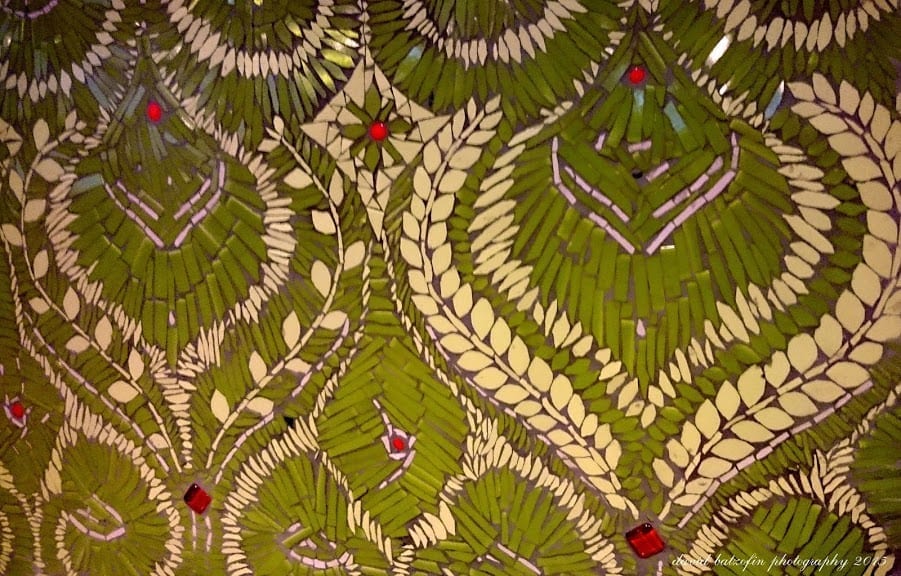 I noticed this mosaic in front of the ticket counter 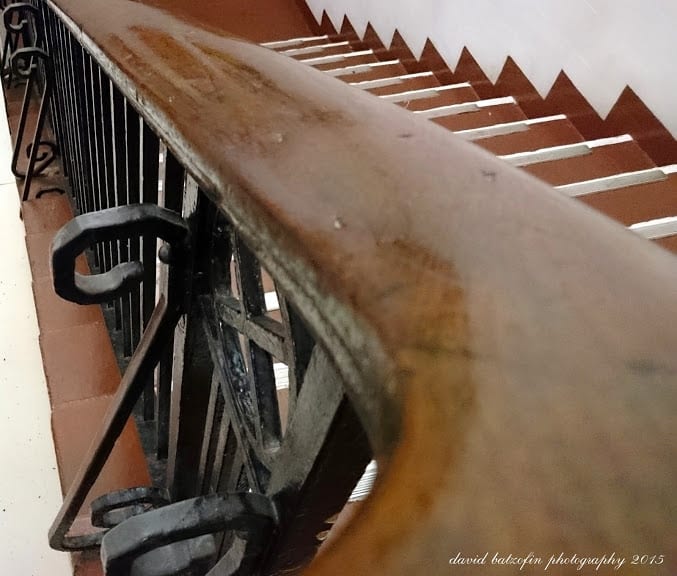 Up or down,
I wonder how many feet have used these stairs over the decades 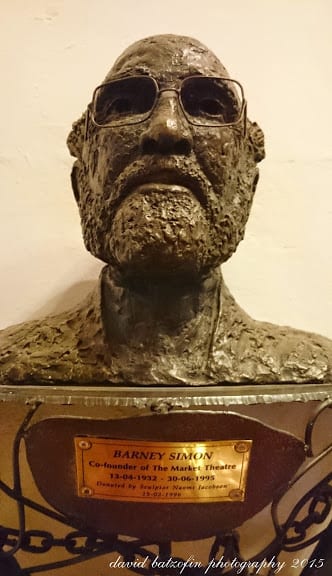 We were headed to the theatre named after this man.
Barney Simon,
Co-founder of the theatre 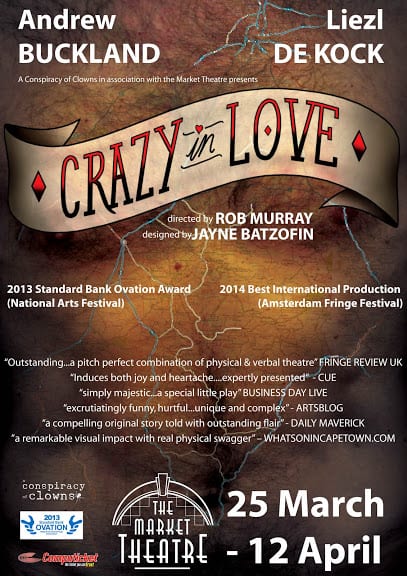 And this is the play that I had come to see…
Even though my daughter designed the set,
my views of the show are totally un-biased!
This version of “Somewhere over the rainbow”
is used throughout the show.
I really liked it…
https://www.youtube.com/watch?v=w_DKWlrA24k 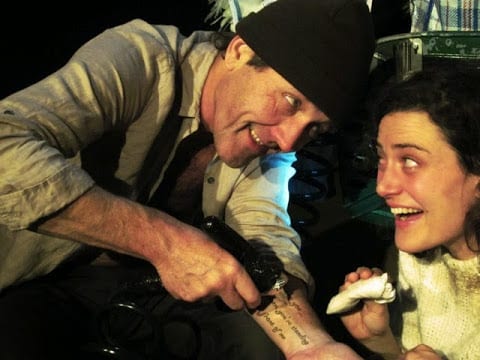 The production stars, and I mean stars, Andrew Buckland and
the young and talented Liezl de Kock.
That is not to say that Andrew is old and talent-less…
far from it.
He is one of South Africa’s finest exponents of the art of physical theatre,
and is not seen on stage nearly enough.
They, together with Rob Murray were the co-creators of the production.
Murray was also responsible for both the lighting and the direction.
In this production they play Leon and Ginny a father and daughter
who are searching for Ruth(almost wife and mother)
who jilts Leon at the alter, literally leaving him “carrying the baby”.
The story is inspired by a John Irving story “Until I find you”.
Their search is told using humour, pathos, physical theatre
and certainly gets the audience to buy into the tale.
Yes, there is bad language…but the more a particular word is used,
the funnier it becomes.
Neither of the very elderly women sitting next to me seemed to be offended. 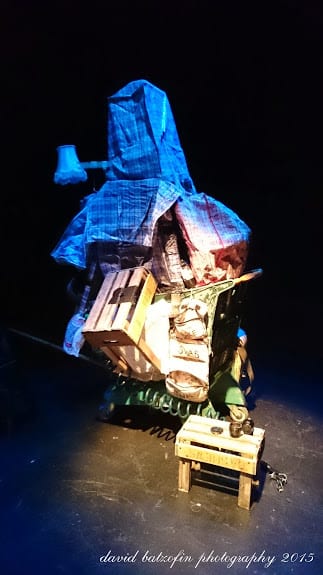 You will read in the program that there are only two actors on stage.
However, this is not STRICTLY true as the mobile set becomes the third.
Like sculptors who can see a statue in a rectangular block of marble,
or a piece of wood, Jayne Batzofin is able to do this with her design.
When questioned on her inspiration for this design,
she will tell you that it comes from
the people who push trolleys around our cities on a daily basis.
We might not even notice them, but they carry all their belongings with them,
so wherever they stop, that becomes home.
To tell you too much about the working of this complicated, yet simple design
would give parts of the story-line away.
Suffice it to say that her trade mark “Batzofin Bite”, is present here.
Not only did she design the set, but costume and prop design
were part of her portfolio on this production.
The show runs until 12 April 2015 and should not be missed. 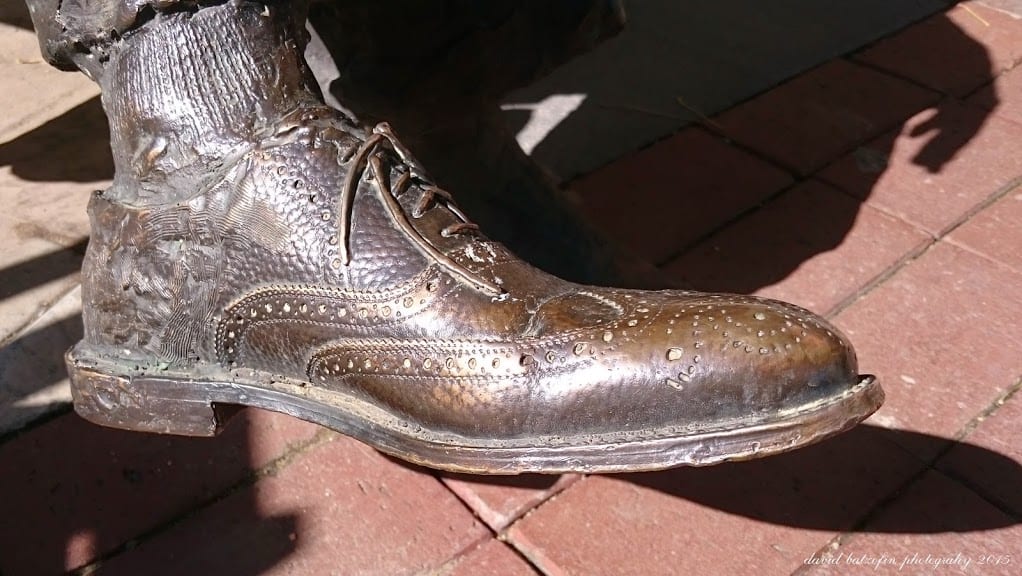 A part of one of the most recognised statues in the area.
Saxophonist Kippie Moeketsi 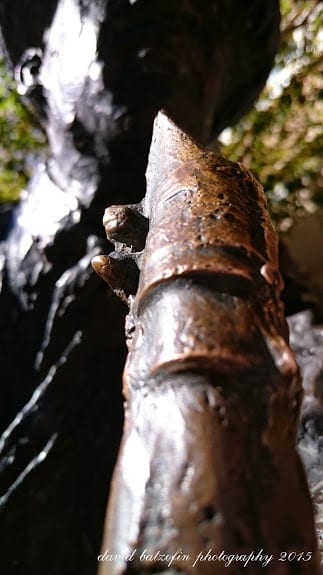 My niece Jenna getting into frame twice… 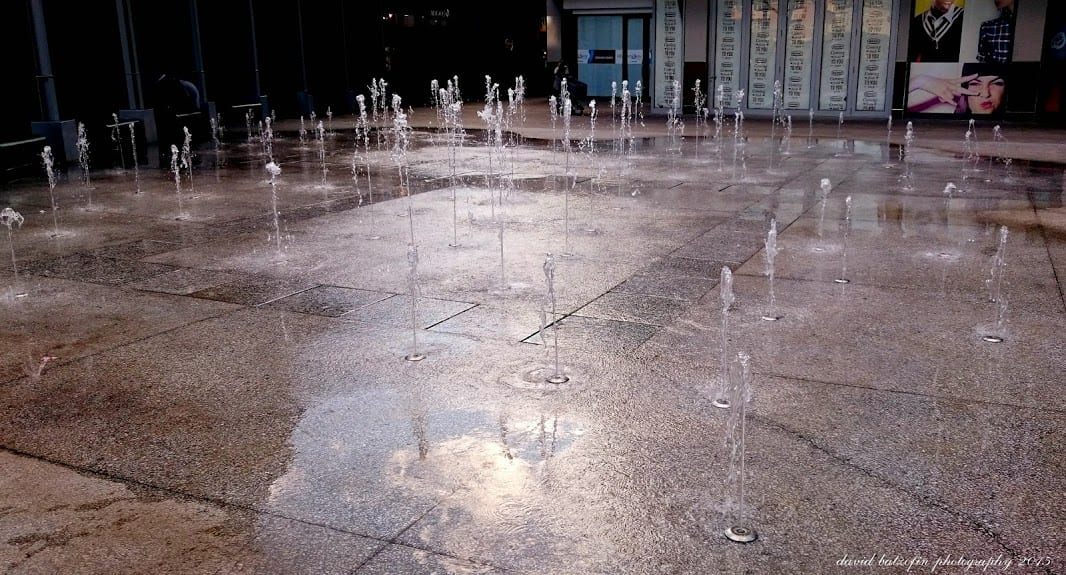 The water feature at the Newtown Junction 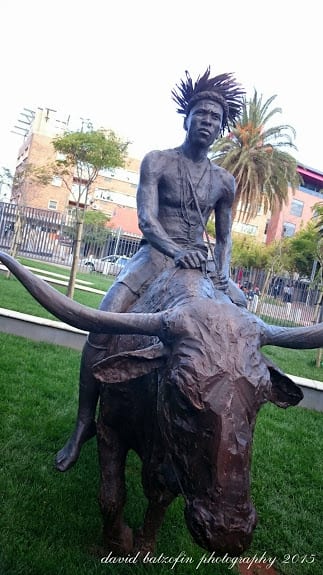 I am uncertain if the local indigenous population
actually rode oxen, but I might be wrong.
I searched for a name plate but found nothing.
I also searched the Internet for any reference
to oxen being ridden, but came up empty handed. 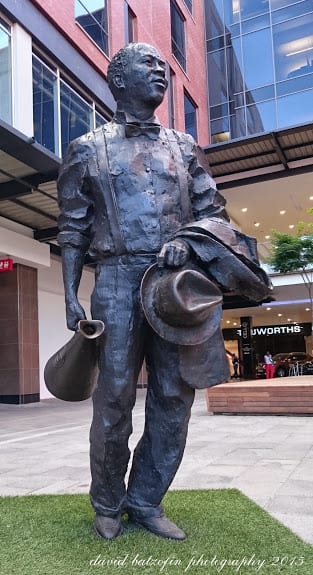 The same with this rather wistful character.
Come on centre management, give credit where it is due. 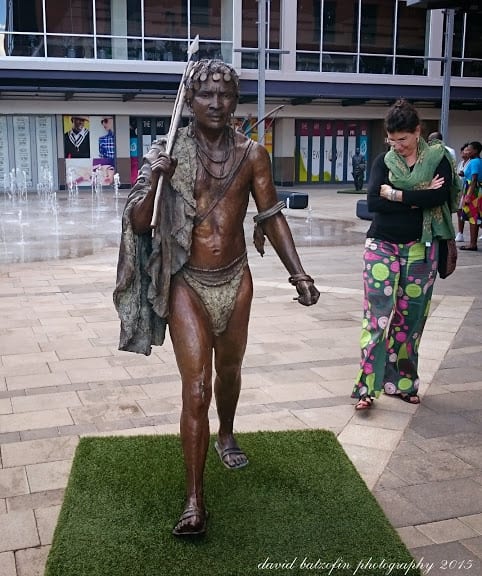 My wife comparing her sandals to those worn by
this Basotho Man at Newtown Junction? 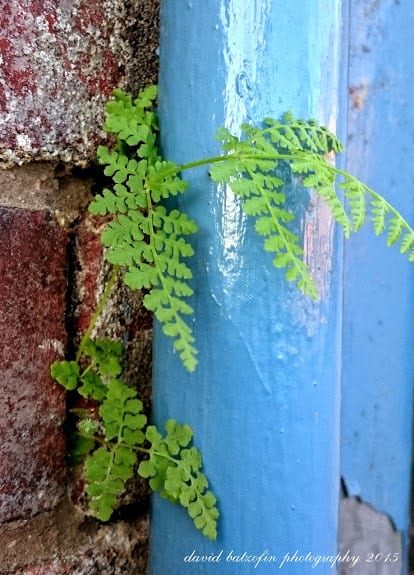 And finally, it seems that greenery can be found almost anywhere