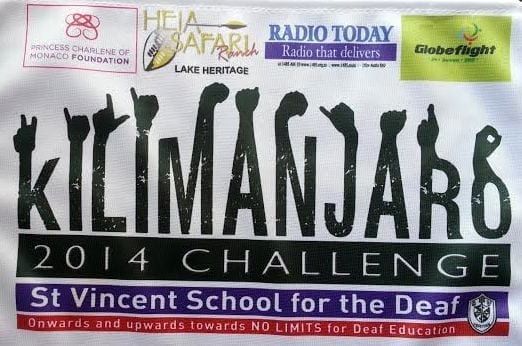 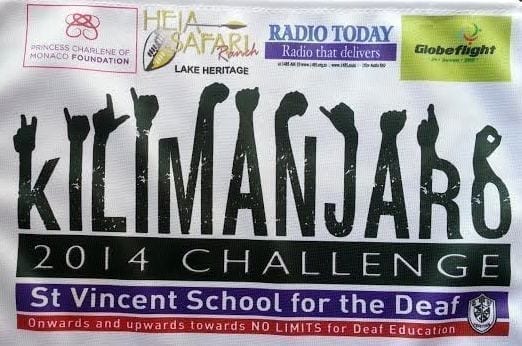 With thanks to Princess Charlene of Monaco Foundation and Globeflight 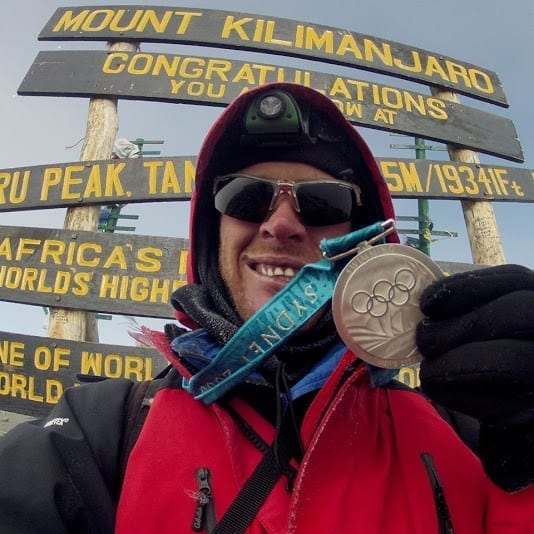 The major achievement was getting deaf  Olympic swimmer Terence Parkin to the summit.
To the best of our knowledge, this feat on Friday 10/10/2014 at 07h20,
makes him the first South African Deaf swimmer to stand at Uhuru Peak.
WELL DONE TERENCE.
You proved once again that the Deaf can do anything except hear!
I am certain that your students (and the staff) will be very proud of you
It must be said that his Olympic medal caused him some problems…
Not at the summit, but at both Kigali and Kilimanjaro Airports,
where security took an interest in it and examined it extensively.
Luckily, it was returned to him on both occasions.
I wonder what stories the security personnel told their families.

https://www.youtube.com/watch?v=6TJbZIuRoU8&feature=youtu.be
Check out our Challenge Teaser.
Thanks to Chris Mostert and his team at Shush… 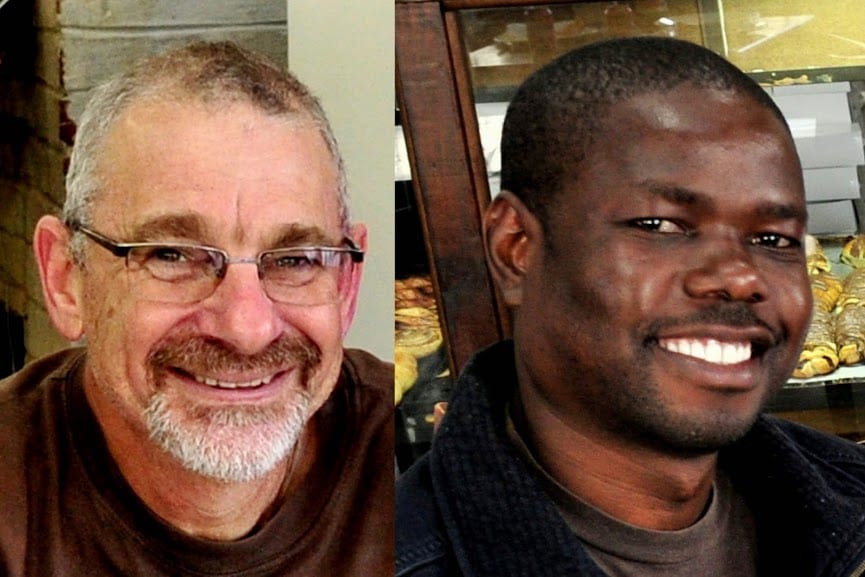 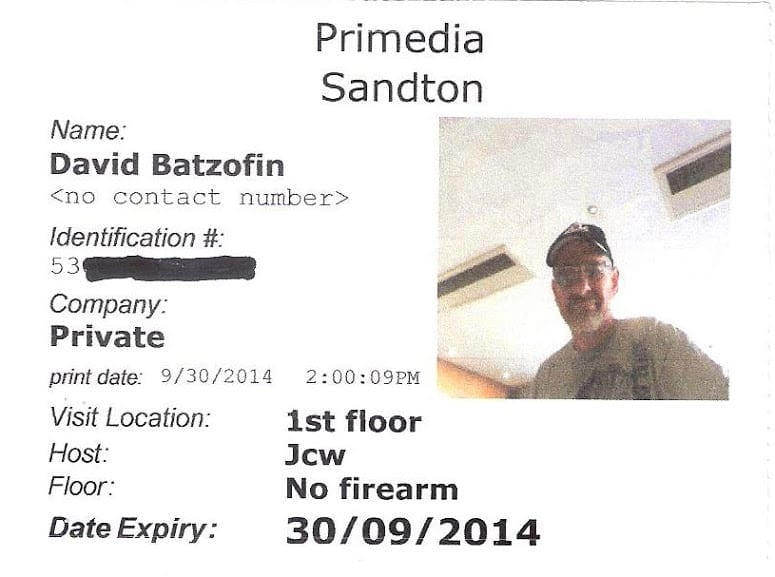 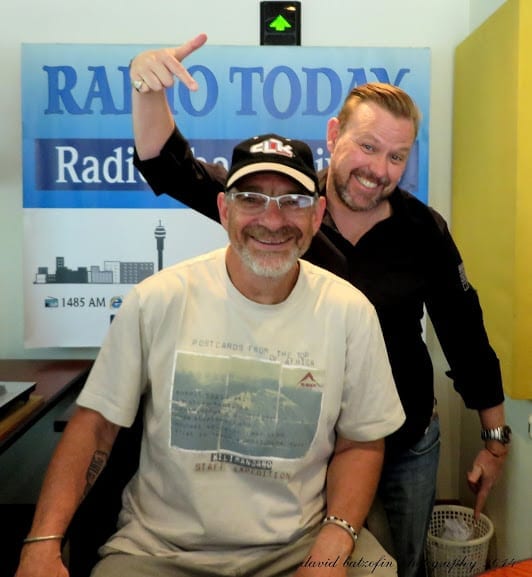 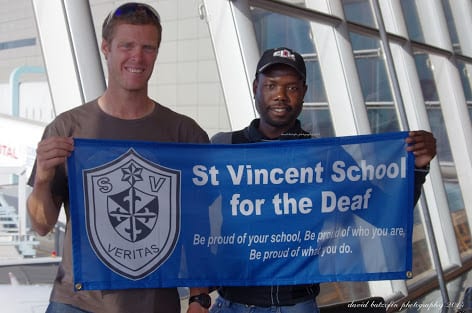 Isack doing his pre-climb briefing.
He also informed us every night during the climb what we could expect the following day.
A great motivational speaker…
http://podcast77612.podomatic.com/entry/2014-10-19T00_38_04-07_00

Some thoughts from the team… 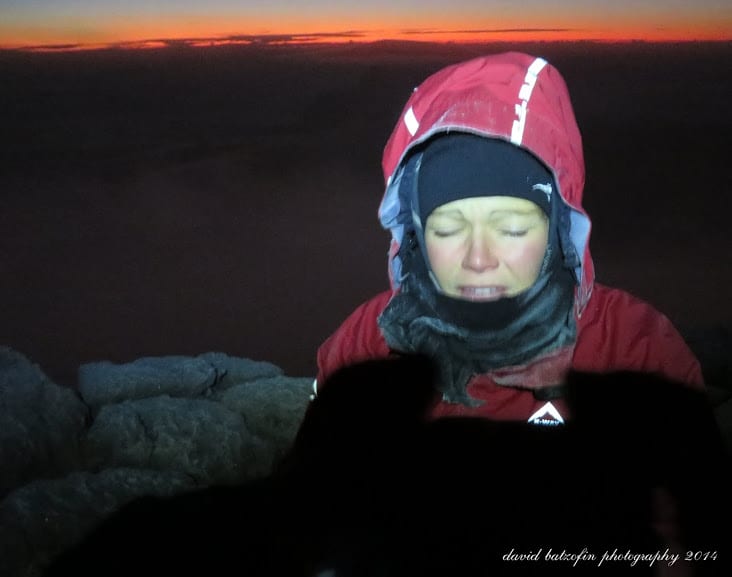 Bianca Schulte:
“Standing at the top of Kilimanjaro with my team was a once in a lifetime learning experience which I am grateful and proud of“.

Climbing Kilimanjaro was an experience that I am grateful to have had. One can only imagine what it is like before the time and wonder. After the first few hours of walking on the Sunday

I was relieved and thought this is OK, I can do this.

When we reached camp and I saw my tent and realized I would be sleeping here for the next 6 nights I also thought, this is OK, I can do this.
I enjoyed the daily walks, the scenery was spectacular, changing on a daily basis.
It was wonderful and weird not having contact to the outside world
and being surrounded by just mountains and nature.
Building up to the summit night, I was feeling nervous as again I did not know what to expect. We started walking at midnight and I knew it was going to be a 6  to 7 hour walk. After a short time the cold hit me like never before and I could not feel my hands nor feet. I started feeling sick with stomach cramps.
I took a break at some point and my guide Isack asked me “ Now What” , I answered “ We walk”.
The thought crossed my mind once about turning back, but in life one always has a choice. One cannot control anything, there is only one thing one has 100% control over, your attitude. This is something I live by. So I chose to carry on walking and put “ Mind over matter or body in this respect” into practice so that I could reach my goal. At 7:20 on Friday our team made it to the top. Although we were greeted by a strong wind, the scenery and glaciers were spectacular. Standing at the top with my team is a once in a lifetime feeling and experience which I am grateful and proud of.
My gratitude to all who made it possible for me to stand on the highest free standing mountain in Africa in order to create awareness for an amazing school St Vincent for the deaf. 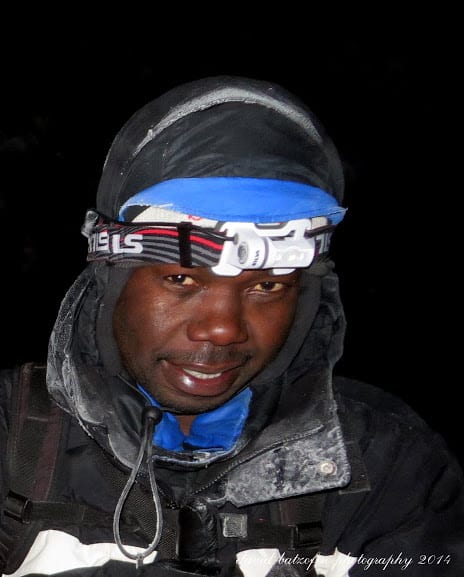 Winners Shishenge:
“Positive mindset always defeat the power of the unknown”.
If a person’s life was subject to editing,  my Kilimanjaro experience wouldn’t be touched a bit.
I would and will cherish it as it happened.
From the time we left Rongai point, I knew something unusual was waiting to happen.
Feeling sick at first night into second day changed my attitude for good.
Having experienced the lows of feeling sick prepared me emotionally to expect and defeat the worst to come.
I embraced all the walks from camp to camp as part of the challenge though some destinations seemed repellent to our efforts we put into reaching the next camp.
The trust that we seemed to have in each other made every step worthwhile.
Of course it would never be over until we walked the walk up to the summit. It must be said that it wasn’t the walk in the park. The fact that we had to climb at night made it so tense but special.
The critical point for me was when my body was tired and needed a rest
but couldn’t rest because the cold was unbearable.
The feeling at Gilman’s Point was so emotional but was soon short lived
by the fact that the end was yet to come.
From Gilman’s Point to Uhuru, my attitude was ” if I made it this far, I can make it to any destination”.
At this stage walking was the only thing that made sense to me.
The view from Stella pPoint was so amazing.
The windy Uhuru peak was better than my freezing cold expectations hence I stayed longer.
Good team we had.
Glad we all made it. 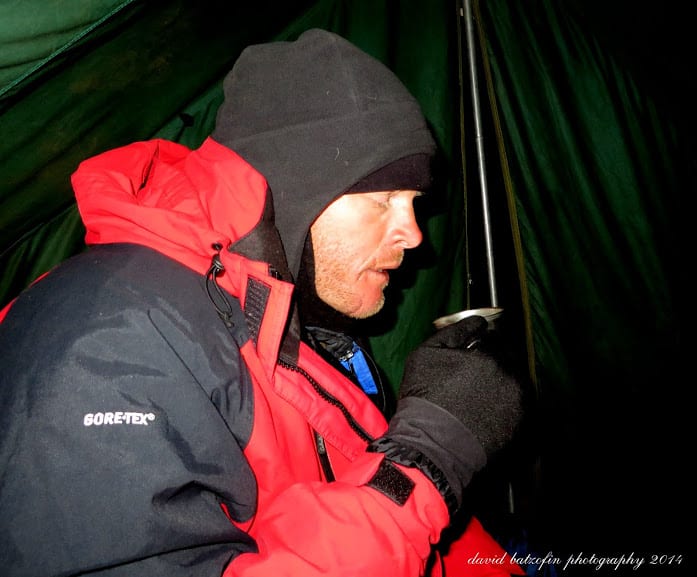 Terence Parkin…
This is the Video that Terence compiled.
And I believe that his footage speaks volumes!
Settle down to watch our week long adventure condensed into 45 minutes
Well done Terence, and thank you for the”camera-on-a-pole” moments.
http://deafafrica.com/movitime.php?clip_id=52 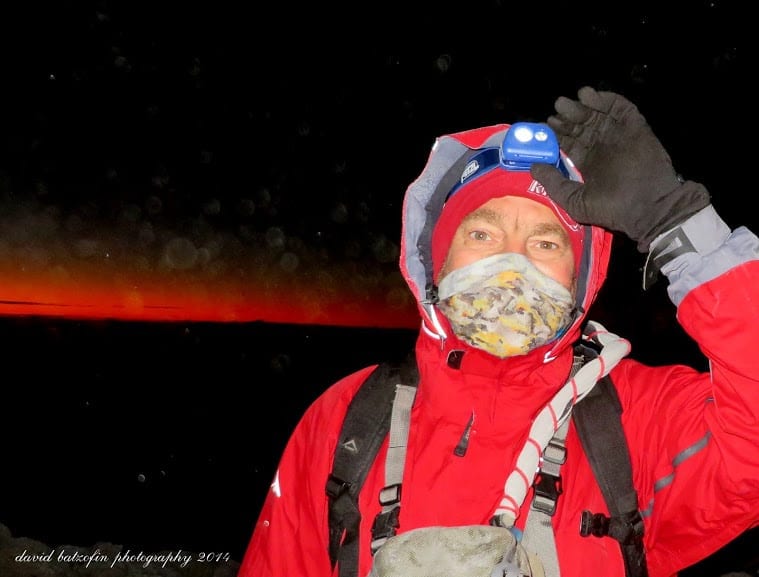 David Batzofin
2nd successful summit.
“This adventure taught me a lot about myself and that humility makes all things easier”
Being my second summit attempt, I sort of knew what might be expected on a daily basis. However, what I was not prepared for was the cold and the wind. But there was nothing I could do about either of those factors, and I had to make the best of what each day had to offer. I might have been grumpy back in 2006, I don’t remember. But I know that I was on a couple of days during this trip. Being the oldest by more than 20 years has some perks?
That aside, I had to marvel and the fortitude of Bianca Schuite on summit day,
when giving up was a REAL option for her.
Terence Parkin continues to amaze me with his resilience and “I-can-do-anything” attitude. He now holds the record for the first South African Deaf Olympian to stand on the summit of Kilimanjaro.(It was also thanks to his involvement with the Princess Charlene of Monaco Foundation, that this climb actually happened)
In my opinion,Winners Shishenge, who was thrown in at almost the last moment,
exceeded his own expectations.
Summit night was the hardest for me and Gilman’s Point seemed to get no nearer as we climbed under the light of the full moon.
There was a point for me, where I was about to give up, and the crater lip finally appeared.
The walk from there to the new sign at Uhuru was virtually plain sailing, but I had forgotten about the last few meters and the biting wind.
The former I dealt with one step at a time, the latter was resolved by getting the f*&k OFF the mountain as soon as we had taken photographs.
My thanks Ingrid Parkin(Principal of St Vincent) and to our major sponsors, Globeflight and the Princess Charlene of Monaco Foundation. I hope that by taking the St Vincent school for the Deaf flag to the summit, South Africans will become more aware of the needs of Deaf Education. 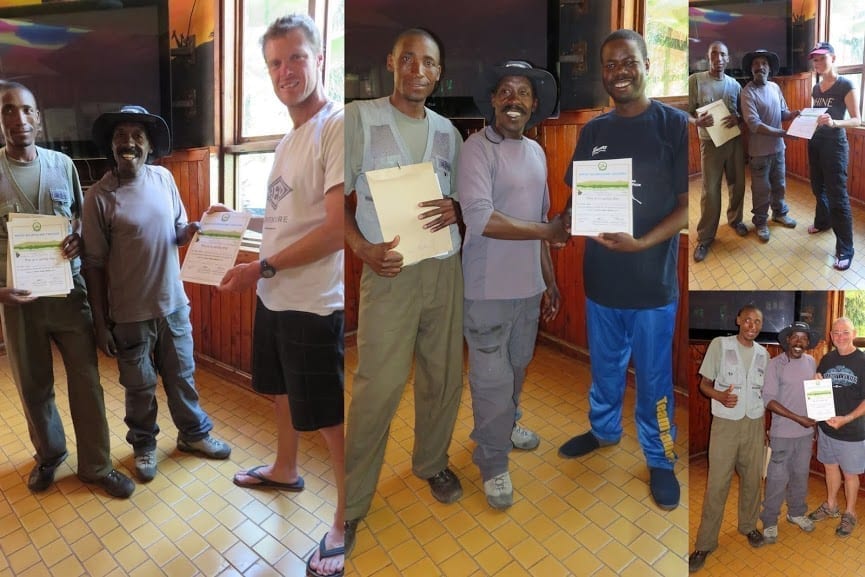 Back at the hotel.
Time to receive our WELL EARNED Certificates of Achievement.
With thanks to Isack and Roman forgetting us to the summit and back.

Sometimes the journey IS the destination…

Our day tour in Gisenyi, Rwanda

A bit of this and that from the EcoTraining Camp at...

My 12 rules for getting published…or maybe not!

Off to market we go! Ben Tranh was not the name...