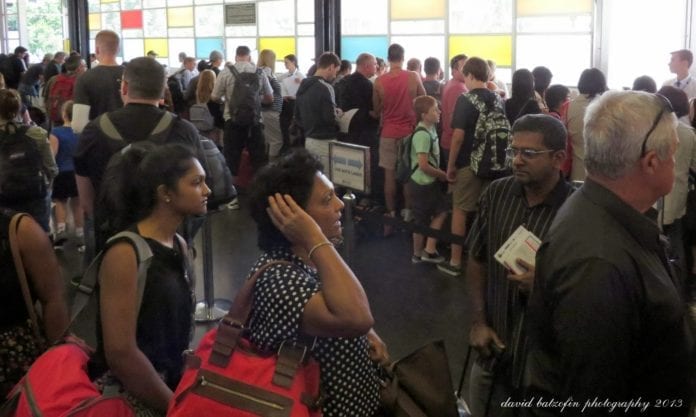 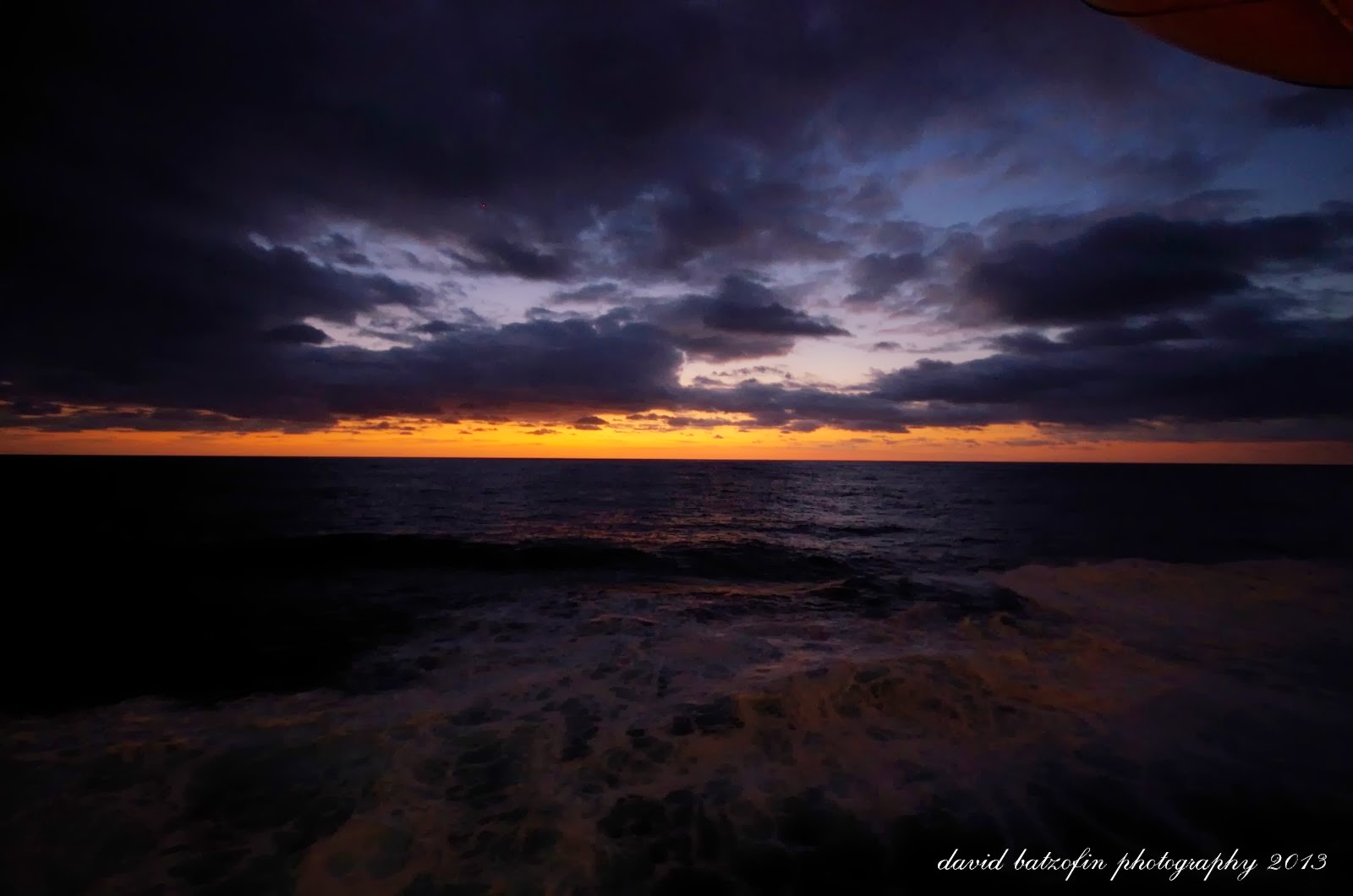 If you are anything like me, then checking in at hotel is a
stress point for you. Long queues, impatient guests and staff that are
overworked and NOT very helpful. 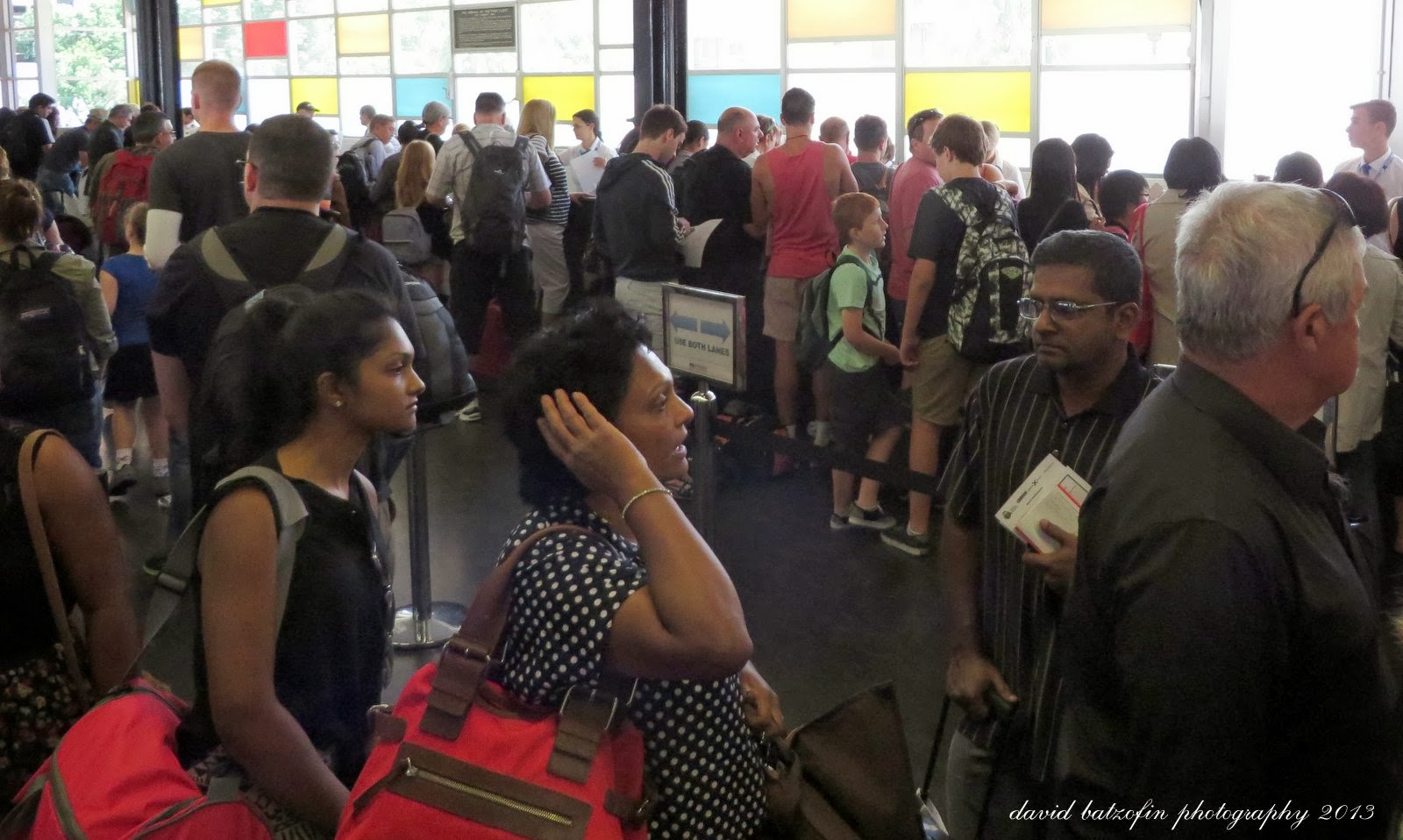 Can you imagine 3500 people trying to check in with a
deadline looming?
And speaking of “looming”, that is what the ship
did…towering over the Sydney Opera House and too big to get under the Sydney
Harbour Bridge.
This was one of my concerns before boarding Voyager of the
Seas in Sydney Harbour.
But I should not have worried, check-in took less time than
a supermarket queue and the staff were helpful and friendly! 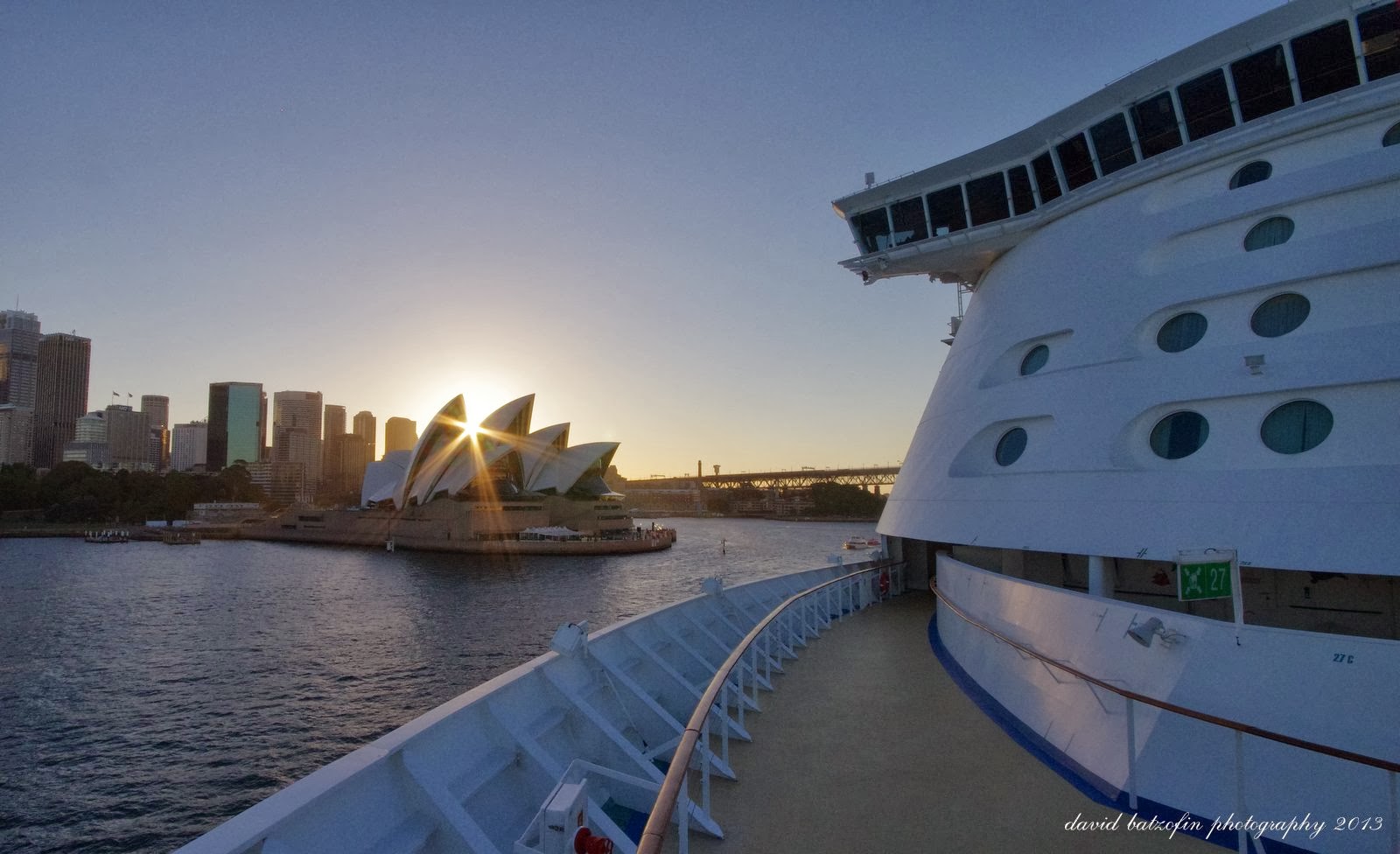 Even Australian customs (and we have all watched Border
Patrol) were helpful and fast.
Once on board, the magnitude of this ship becomes apparent
VERY quickly and the assault on the senses of a first time “cruiser” is
impressive.
The term “floating hotel” does not do it justice as it is
certainly much more than that.
This is the ship that changed the face of cruising forever
and set the benchmark for the ships that followed it.
Although I did not try it out, I have it on good authority
that the climbing wall, mounted to the funnel, is a lot of fun.
Voyager of the Seas was the first ship to boast an ice rink.
But not just any rink. This multi-purpose venue can be used
as a basketball court, a venue for game shows (like Quest) and, of course,
skating.
To quote the cruise director, “The ice rink is actually
situated over steam pipes which caused a series of early teething problems. All
of these have been resolved and the rink is open throughout the cruise for both
guests and professional skating shows”.
And speaking of shows. The entertainment on our cruise,
although aimed at the Australian market, was top drawer. I even ended up on
stage as foil for one of the comedians.
This proved to be a lot of fun, both on stage, and off.
During the former, I had a variety of items juggled around my head. The latter
because the audience now recognized me at meals etc. My 15 minutes of fame
actually lasted for several days.
Presented in the 1362-seater La Scala theatre, boasting
technology that is able to produce Broadway quality shows. 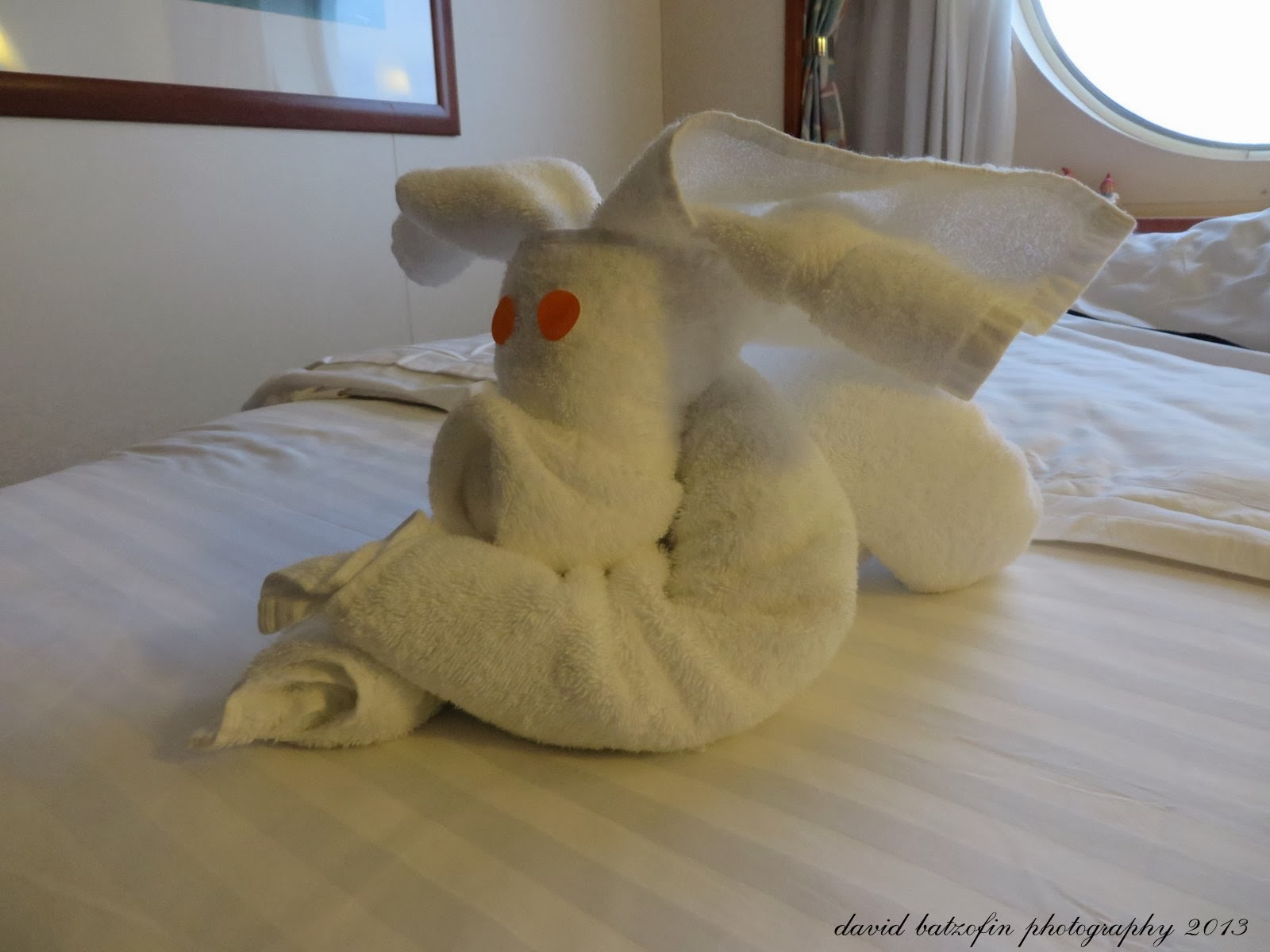 My last cruise was back in the ‘70’s in a cabin that was
made out of steel, had bunk beds and a tiny porthole that could be opened.
How cruising has changed!
Cabins are now staterooms, some with balconies and all with
proper beds and ablutions. One of the features that impressed was the
interactive TV. Entertainment and your up to date account details at the click
of the remote.
Both 110v and 240v are provided, just remember to bring a
two pin converter if you are using 3-pin South African plugs.
If you are a coffee lover, be warned the on board coffee is
NOT the best. But that small complaint aside, all the other aspects of this
ship exceeded my expectations.
Standing on the bridge with Captain Ryan, I was impressed
with the technical aspects of the ship.
At 311m, it can turn on its own axis.
It can crash stop within its own length and even more
impressively it can maneuver in 1m of water.
The Captain did say that he preferred 3m, but 1m is minimum
depth. 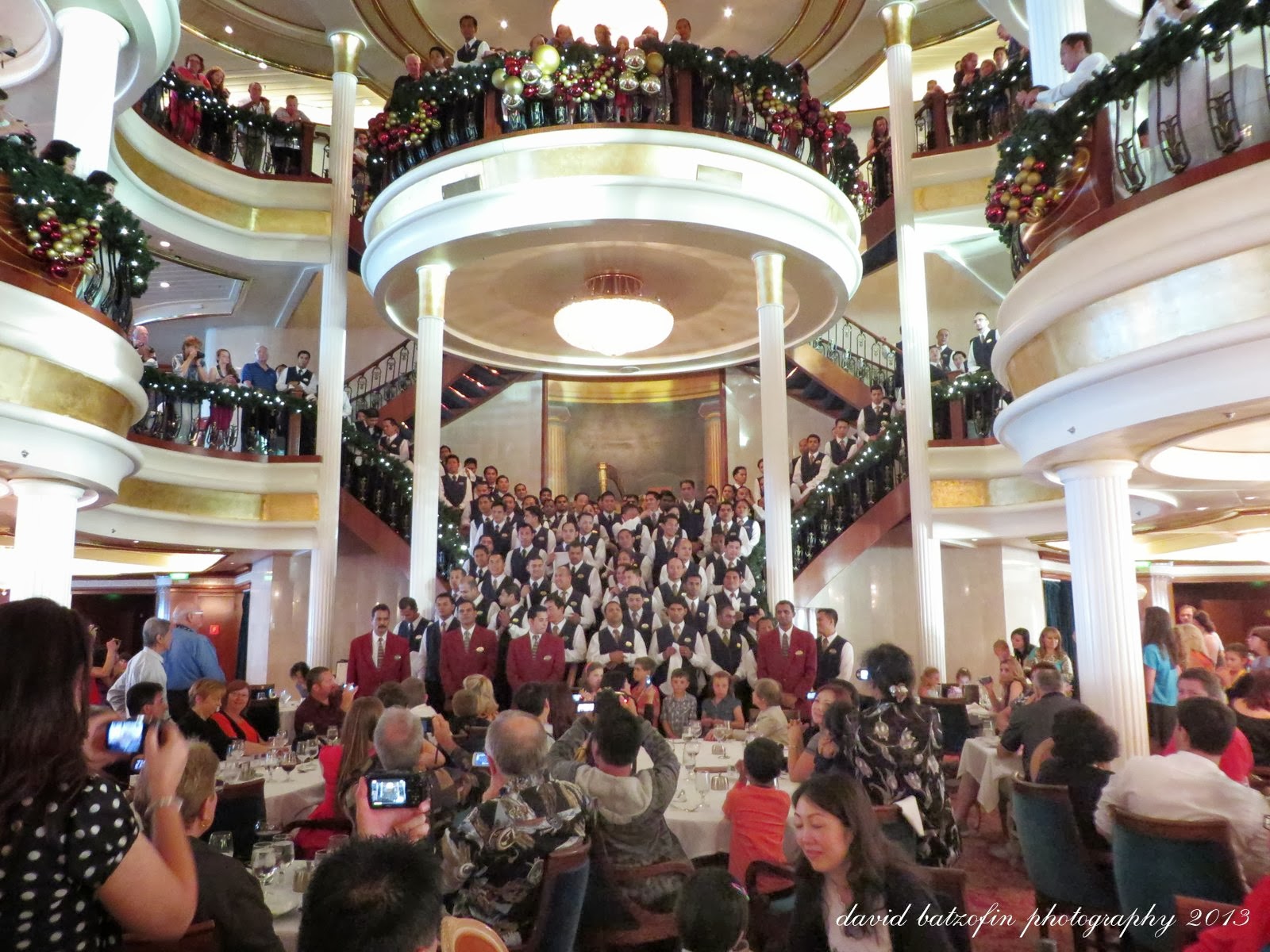 But none of this is really relevant to the average guest
(one of the 3664 that Voyager can carry) or 1180 crew, most of whom seem to be
from the Philippines.
A must for every cruise ship is the casino,( Casino Royale)  Spa and a number of pools and Jacuzzi’s.
And of course FOOD!
There are 3 main “fine dining” restaurants as well as buffet
dining areas like “The Wind Jammer” and Café Promenade.
The main restaurants can seat 540 at a time and the fact
that the staff can remember names is more than impressive. Dale Carnegie would
have been proud.
There is a running track on Deck 12 for those who believe
the urban legend that the average cruise guest will put on 4kg.
There is also a fully equipped gym that has the BEST view.
Another innovation is the Royal Promenade situated on Deck
5. This is where the shoppers shop and those who cannot, watch.
There are “sales” every day and lucky draws 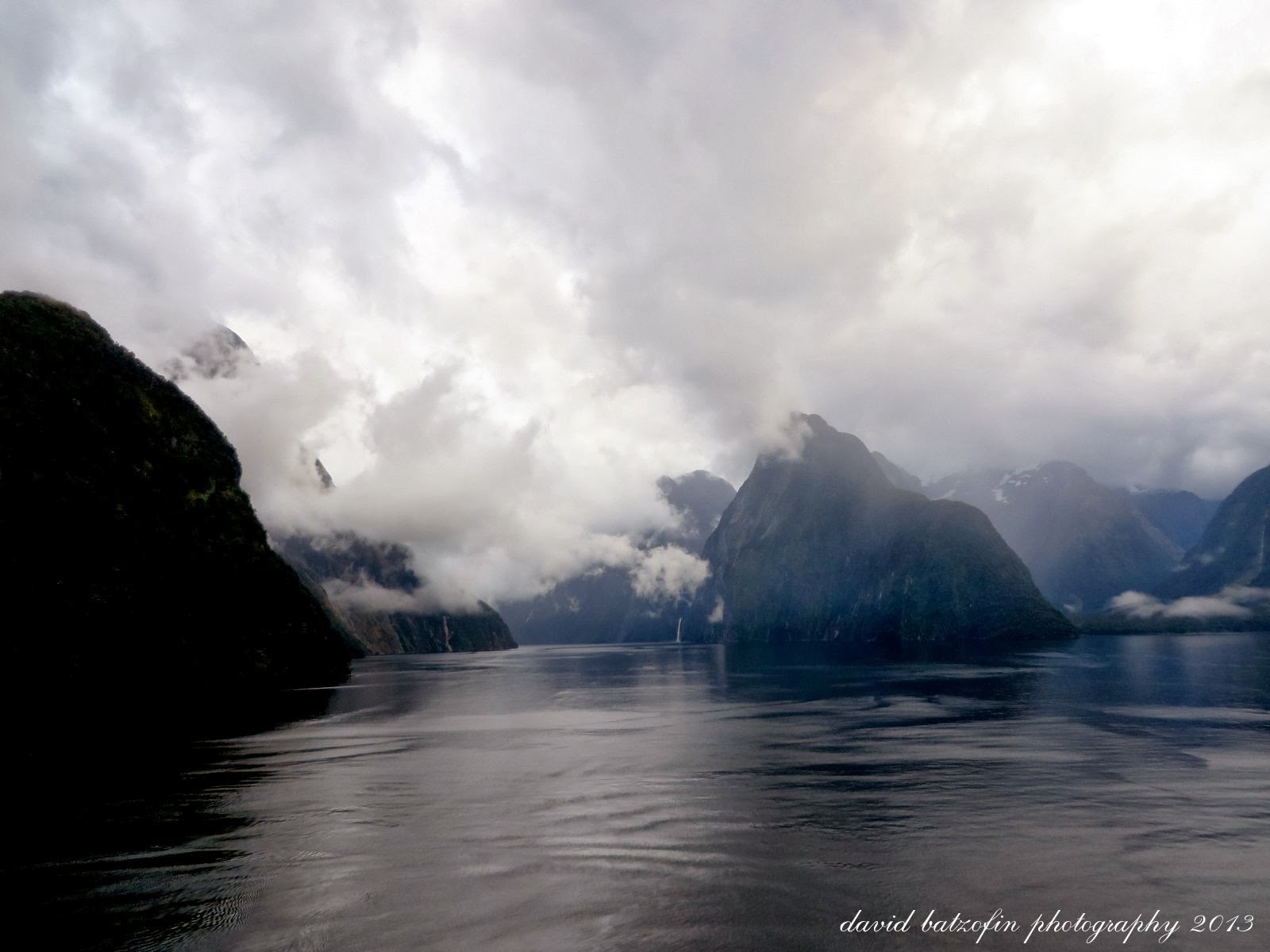 Why has cruising become so popular?
Perhaps it is the fact that your “accommodation” moves and
you do not have to pack and unpack?
Could it be that compared to similar lad based
accommodation, it is less expensive?
Perhaps it is the fact that guests don’t have to think for
themselves?
For me, it was one of the best experiences of my travel
writing career and I cannot wait to be on-board again.

www.cruises.co.za
To see all the postings from our trip,
http://www.davidbatzofin.com/search/label/Voyager%20of%20the%20Seas