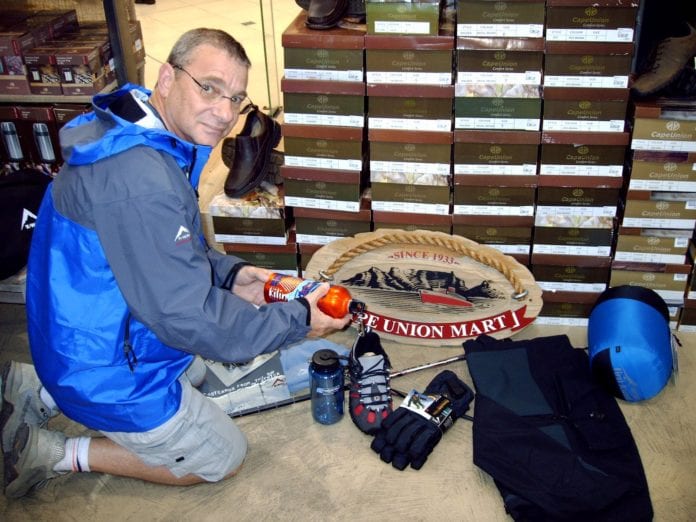 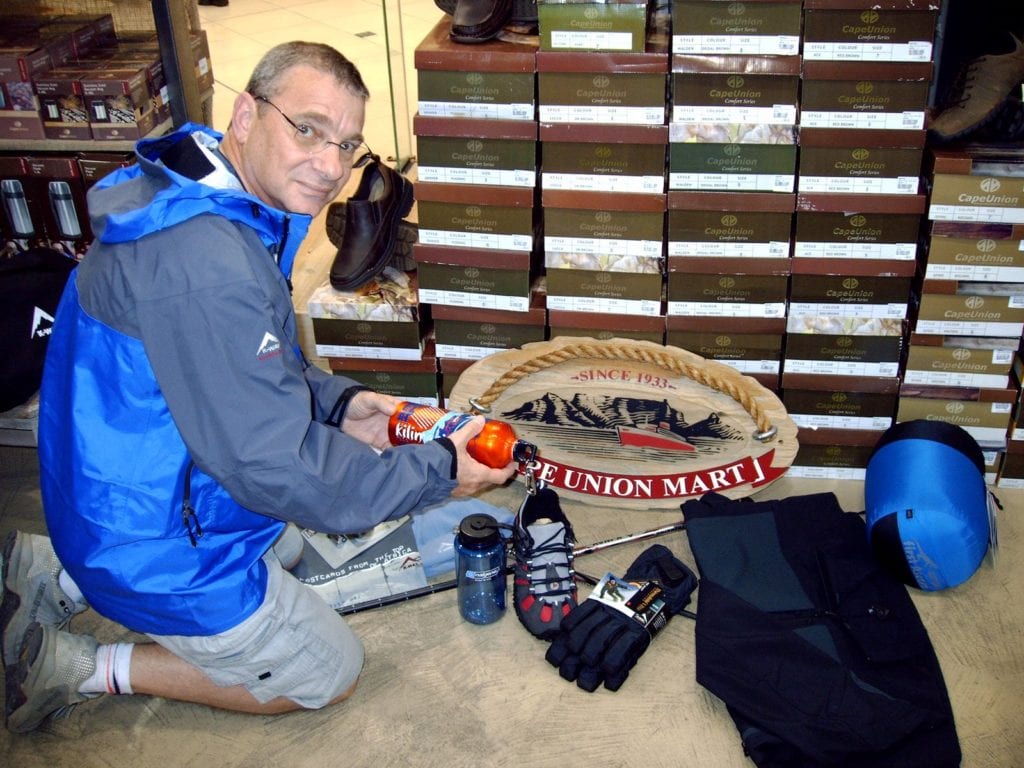 Collecting my kit at Cape Union Mart in Johannesburg 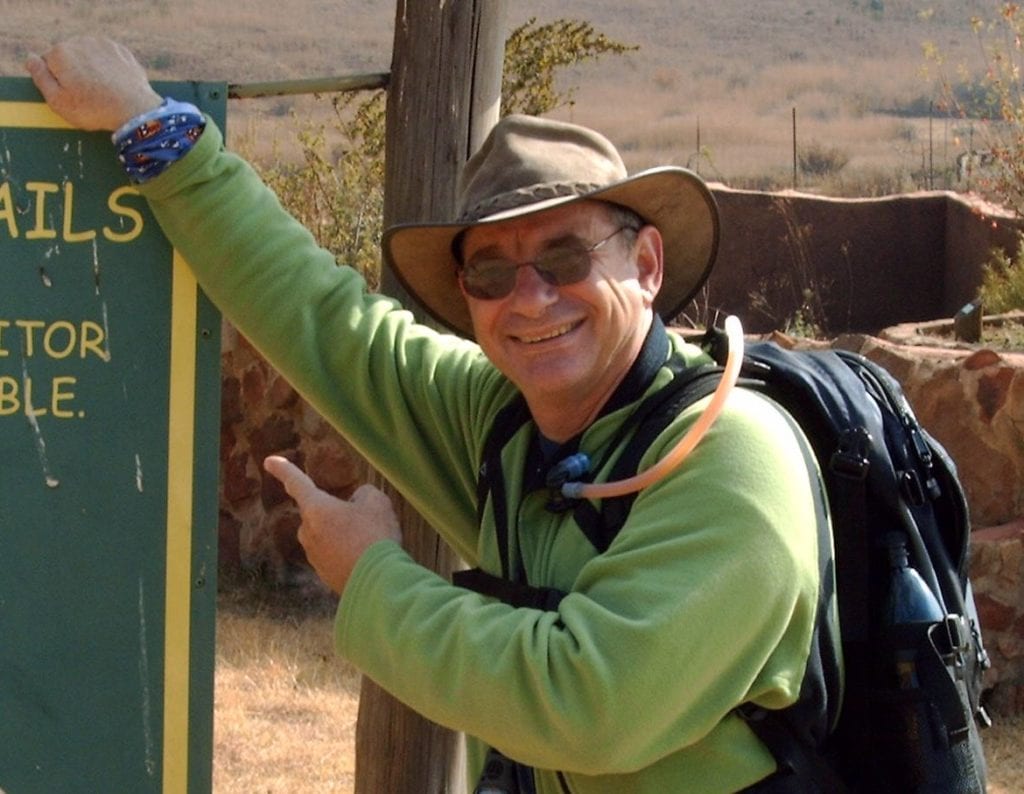 Our first major training hike at Suikerbosrand nature reserve near Heidleberg.
‘Kili shuffle’.
Take a deep breath and move one foot forward, and hold that position! Now take another breath and bring your back foot level with your front foot…and repeat for 7 days. You should now have some idea of how difficult it is to slow down on the mountain.
Trying to walk like that through the suburb in which I live would have got looks of pity and perhaps some kind soul might even have called an ambulance.
In order not to get bored, and to break the monotony of training, I added cycling to the hiking and running. I tried to alternate the running and cycling during the week and then hiked or did a long walk on the weekend. Don’t overtrain. I made that mistake before my first Comrades Marathon, a 90km(55 mile) running race staged every year in South Africa, and almost did not finish it. Since then, less is more, for me anyway.
The hiking can be done at a variety of different places. No matter where in the world you live, you will probably have to drive for at least an hour to get to a decent hiking venue. I got bored with that and decided to walk around the suburb I live in.Walking through suburban streets dressed in Kilimanjaro climbing gear is enough to get the police interested. As it might look that you are wearing the entire contents of a wardrobe and then carrying even more household goods in your back pack. And talking of backpacks, try to have about 5-7kgs(11-15 lbs.) in yours when you do your training. Use these hikes to get the height of your trekking poles correct. When I went on my first hike I was unaware that my trekking poles had to be ‘set’. A comfortable height is reached when your forearms are parallel to the ground. Some people find them unnecessary; others only use one pole. But I found that a pair works best. You may end up walking like a praying mantis but they take the strain of your shoulders and act as a second pair of arms. Luckily for me I live between a large park and a dam in western Johannesburg.This meant that I was able to use both areas to walk in. Because they are relatively flat areas, I chose to do longer walks at a brisk pace. I usually walked for about four hours at a pace of around 15min per km. A lot faster than the Kili-shuffle, but will give you a good training base. You are thinking, he said walk slowly…aren’t you? It is better to train at a faster pace than a slow one.
I also tried to get in at least three runs a weeks of around thirty-forty minutes. 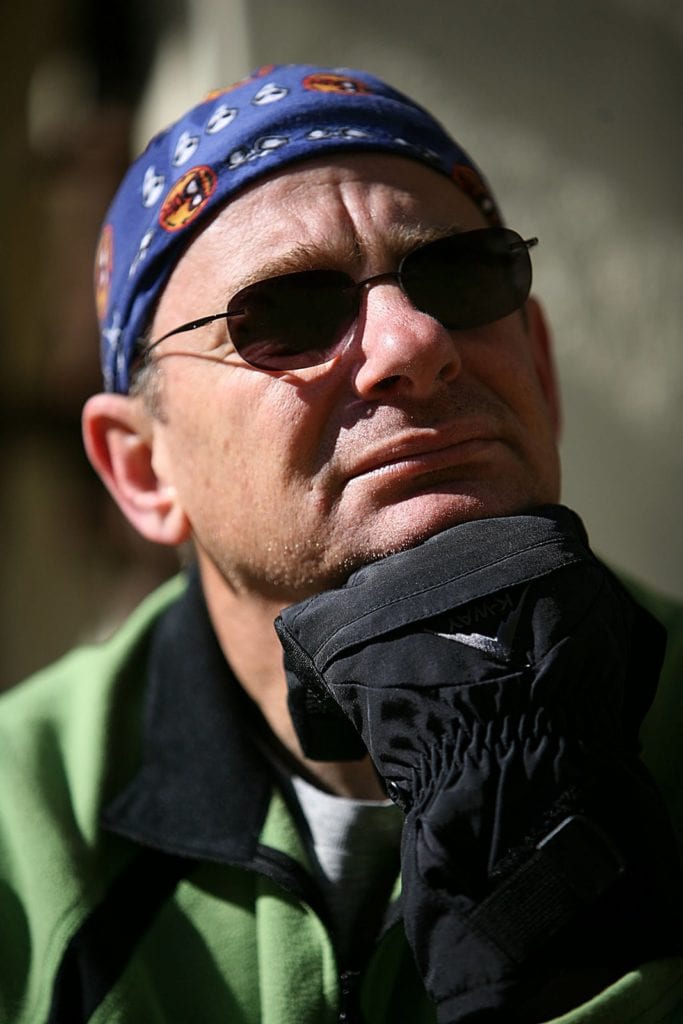 In a pensive mood before the climb
During the last week before the climb I cut back on the physical training and concentrated on training my mind.
My visualization technique is very simple…get a good mountain map and your itinerary. That is the most physical part of this exercise.
Now walk the route, in your head. Try to feel the mud beneath your boots, the cold and the damp, but more importantly be positive about every step you take. See yourself succeeding every day. You cannot physically train for altitude, but you can mentally prepare for the physical effect on your body. So see yourself overcoming the headaches and the nausea. Plan that this might happen. It happened to me on the second day of the climb, and I accepted the headache and thanked the mountain for giving me the opportunity to enjoy the scenery. After a lie down and a reasonable nights sleep I was fine and I was not troubled by either of these symptoms again. I did have a headache almost every morning but that was from sleeping with no pillow.
You also need to prepare you mind not to second-guess what your symptoms are. A headache could be just that, not a symptom of impending altitude sickness. By the same token, do not deny your symptoms as this could put your life in danger.
By the time I actually got to Kilimanjaro I had ‘climbed’ the route seven times.
The most important aspect of mental preparation is to be positive. I was able to see myself enjoying the climb and the adventure of everyday on the mountain. 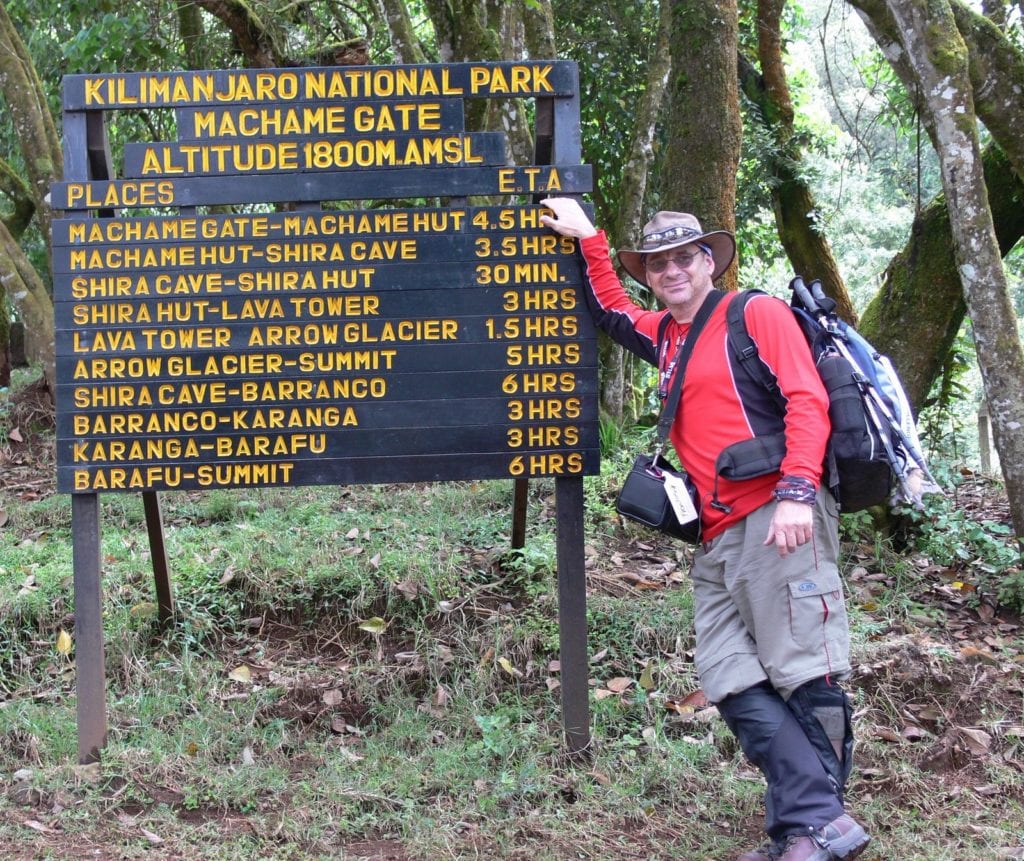 If your mind is strong, your body will follow. It does not have much of a choice.
It is said that older people who tackle Kilimanjaro will succeed, and I believe that mental preparation is the reason for this.
A quote from my journal seems to highlight this point “I have walked the route several times in my mind in the week leading up to the climb and I am quietly confident that I am mentally and physically ready to accept this challenge”
About two weeks before we left for Tanzania, our route to the summit was changed to due the closure of the Western Breach route being closed. Luckily for me I found out in time, or mentally I would have been climbing the wrong route!
Train both your body and your mind and you will be well prepared to accept the challenge that Kilimanjaro has to offer you. 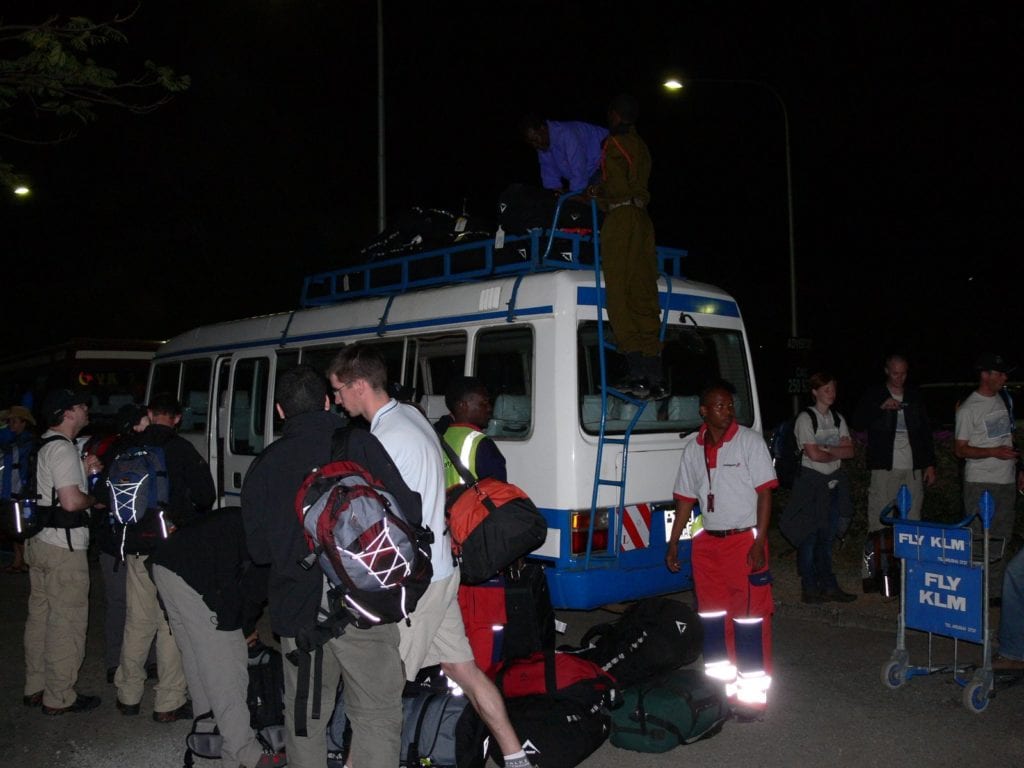 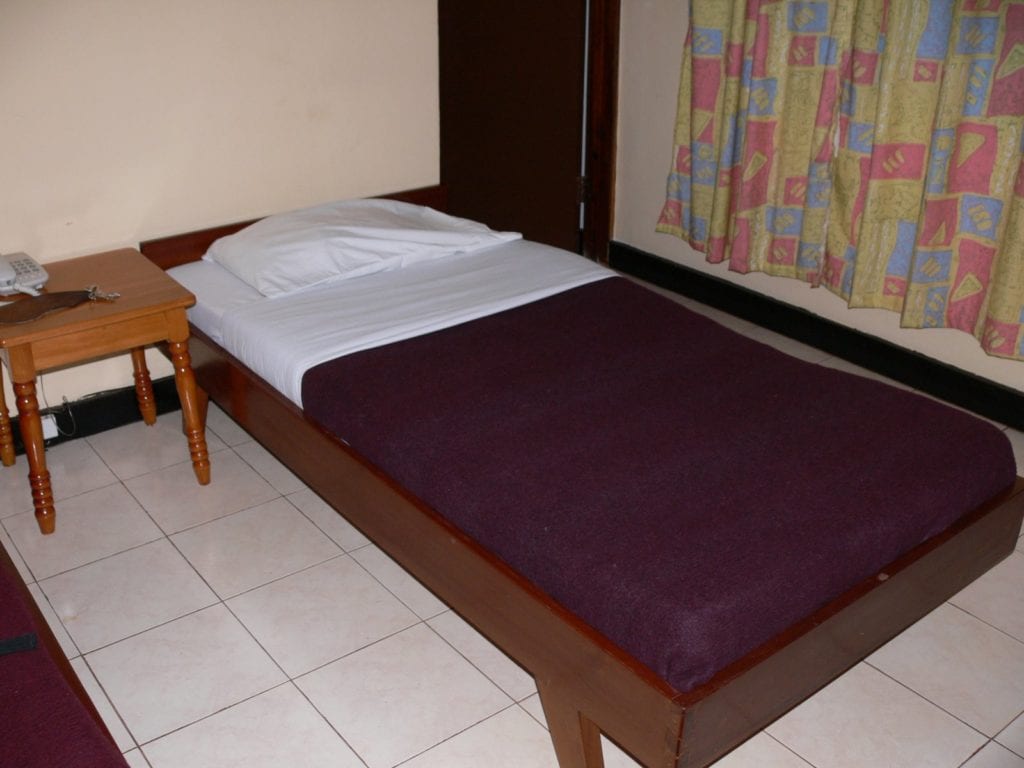 OK,Keys Hotel was not the greatest hotel in the world…but the bed was comfortable and the room was clean 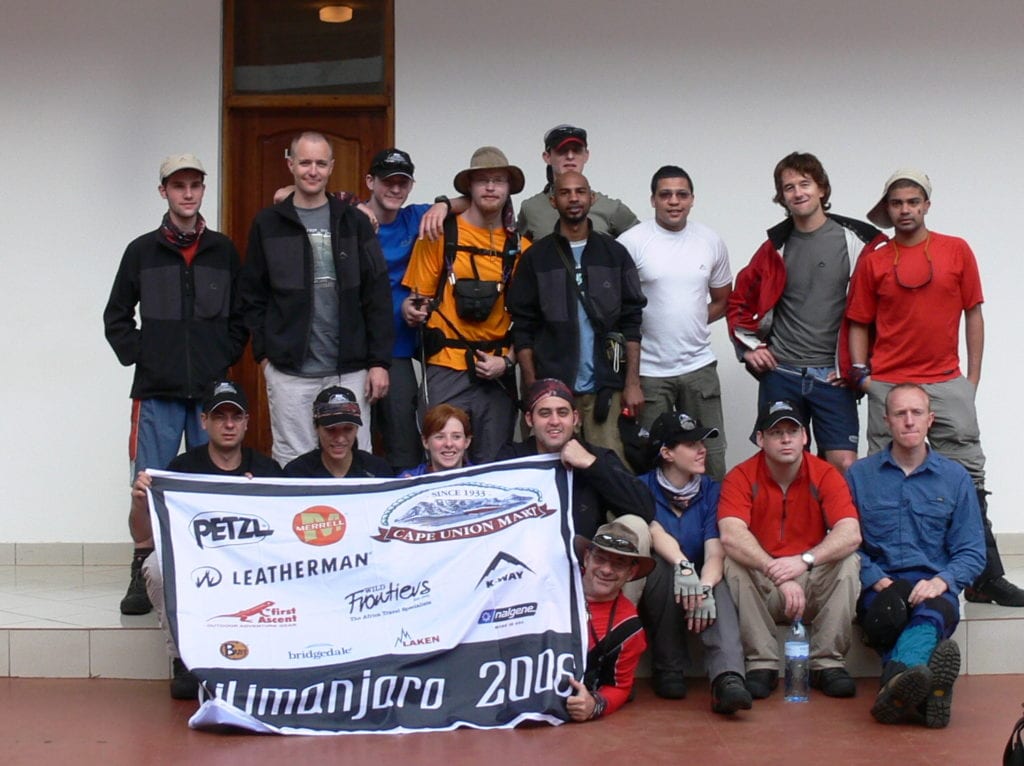 The team. They were all Cape Union Mart staff except for Hagen(the editor of FHM magazine and I) 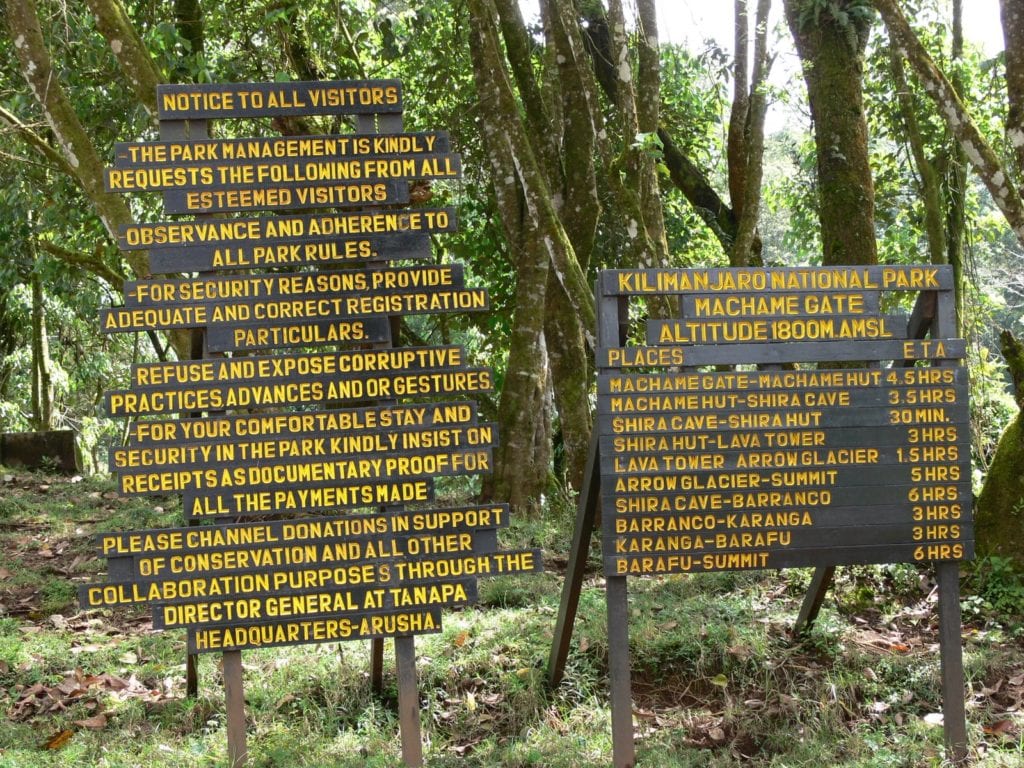 I read them all, just in case… 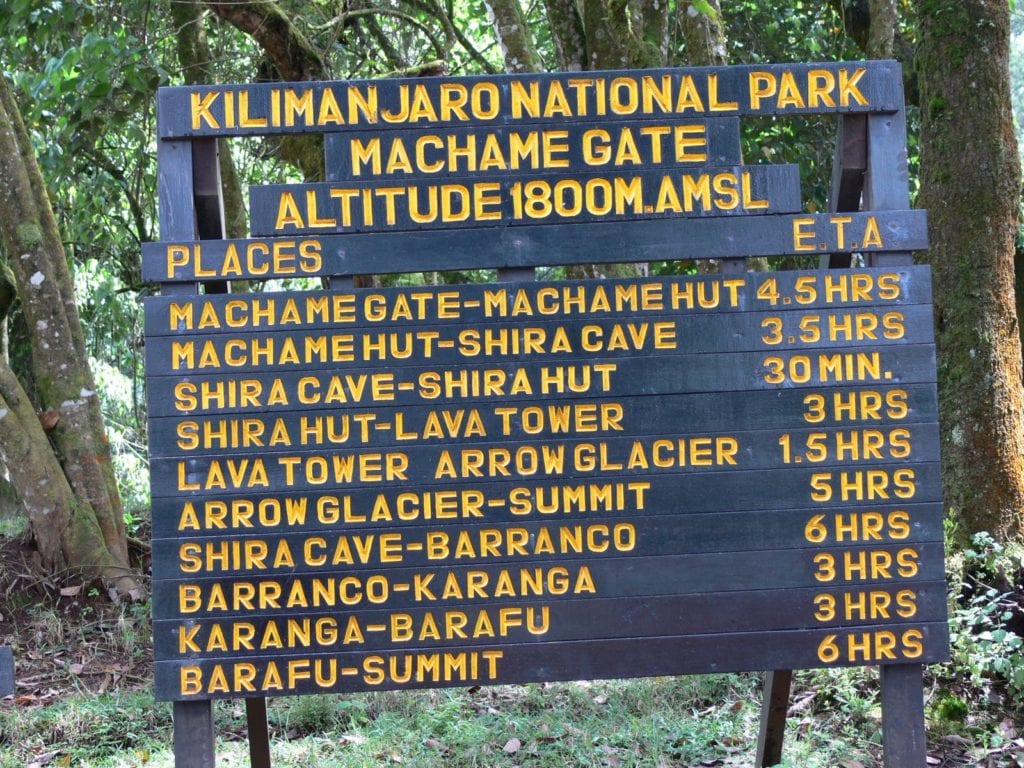 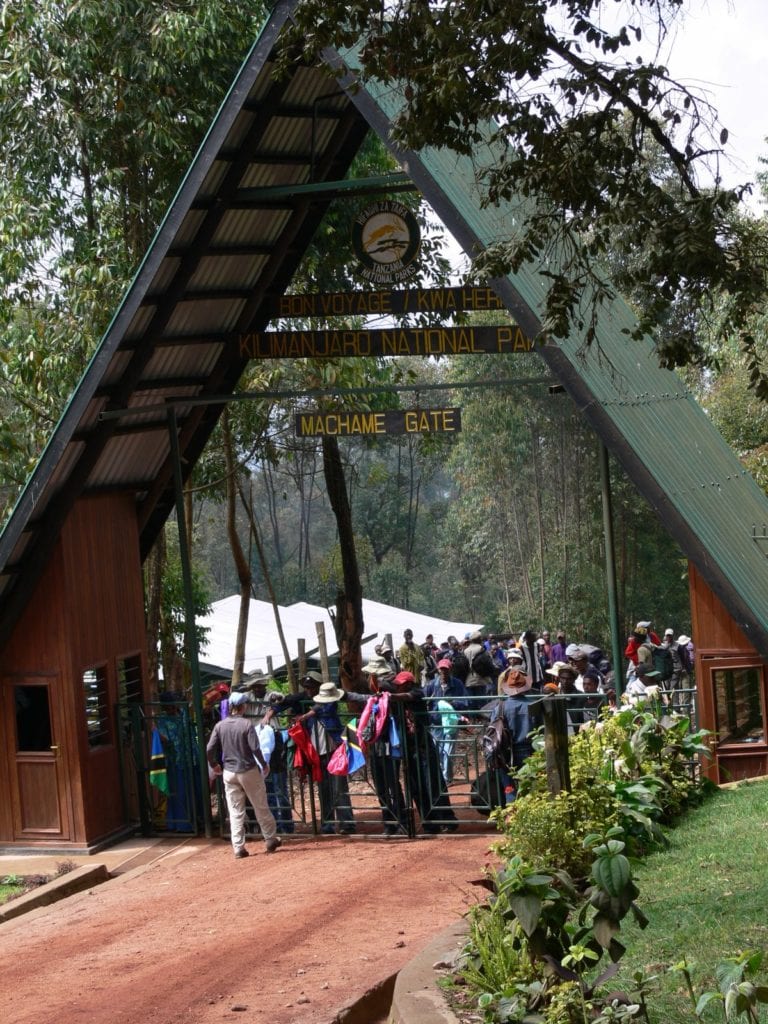 the Machame entrance gate, the people on the outside are looking for work as porters or guides 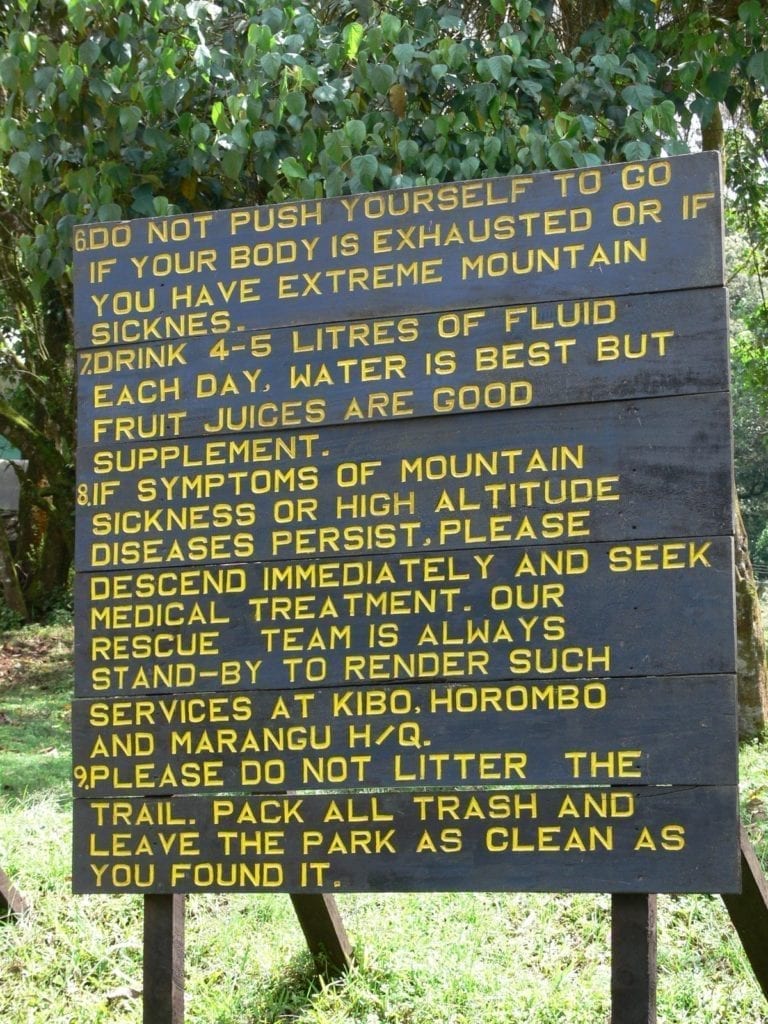 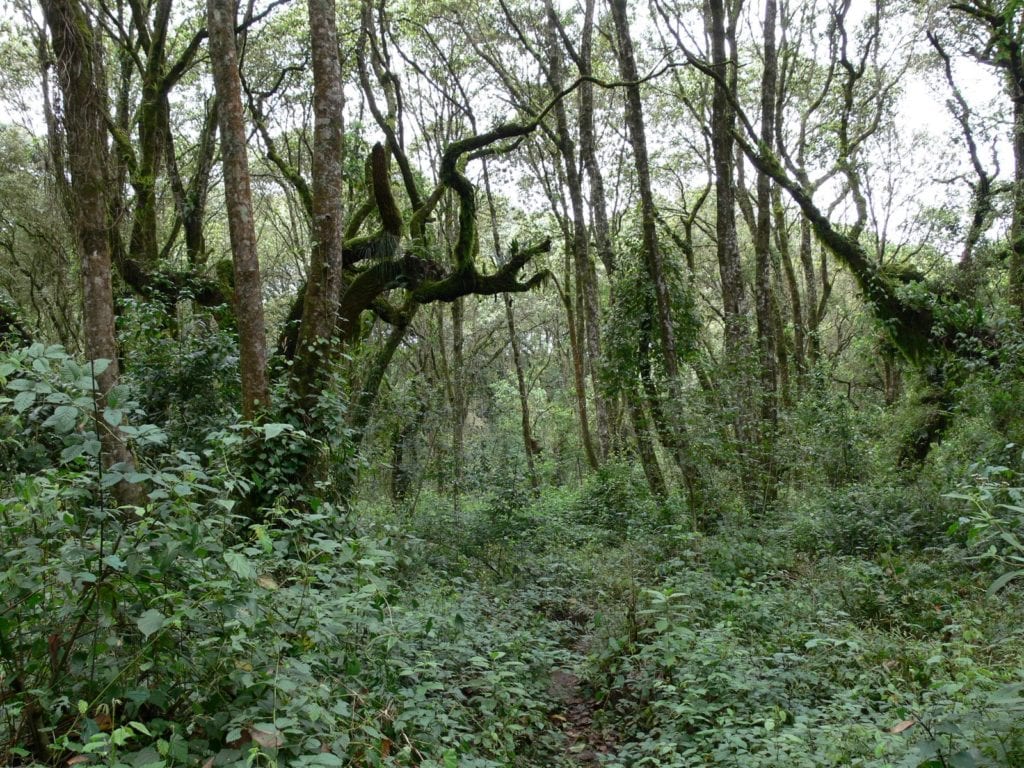 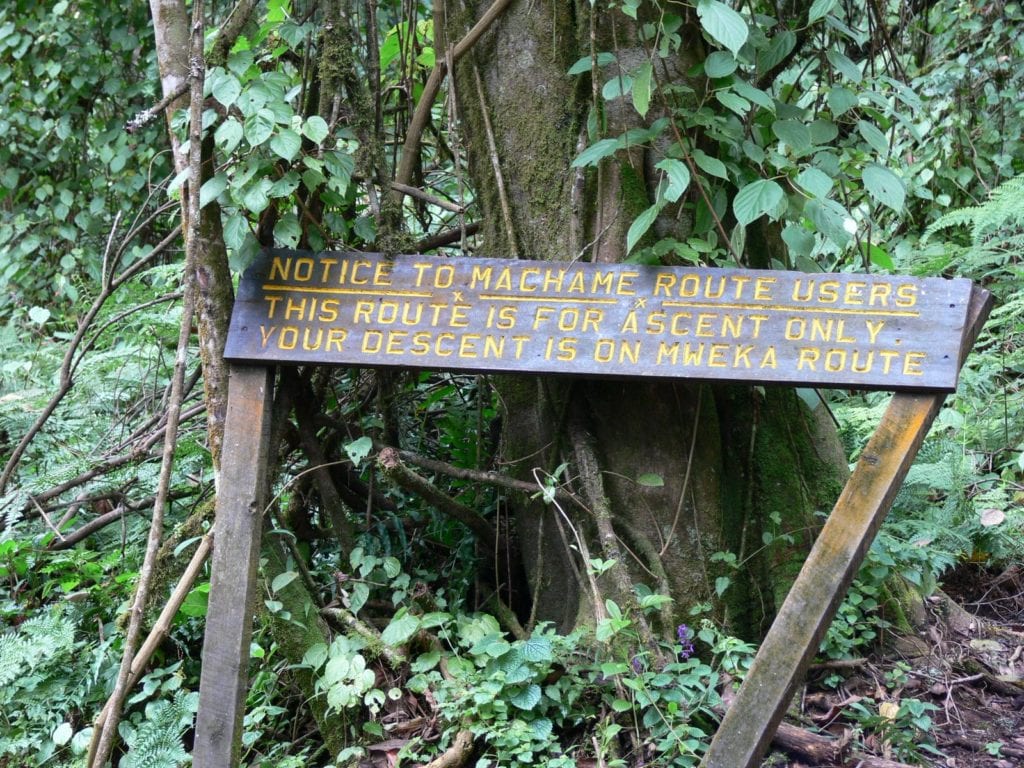 One way up…another way down 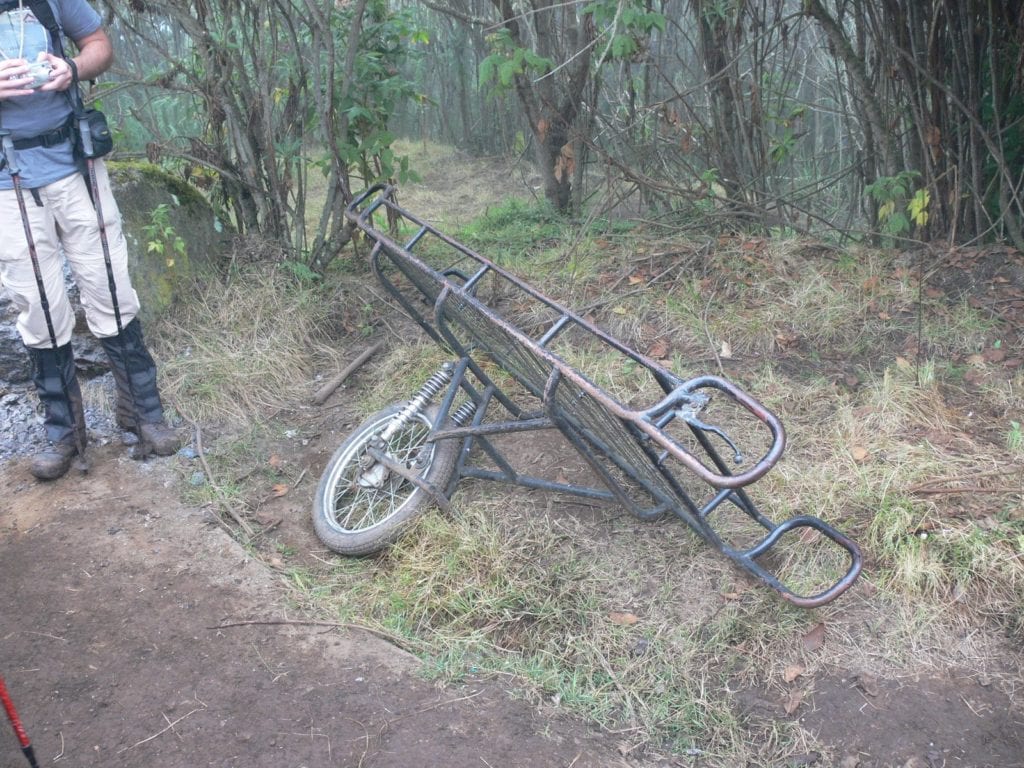 This is the mountain “ambulance”…no brakes but it does get you off the mountain quickly and that is exactly what you want if you are in trouble…
This is what Quinton had to say about his experience…
“I was fine that Friday morning, when we started out for the summit.
I was in high spirits and mentally prepared, especially, my mind set.
It was into the third hour of our climb that I started becoming breathless and my toes and finger tips started going numb from the cold.
I gathered it was as a result of the stop, go all the time as one’s body tends to cool down from this and you lose your rhythm of breathing and pace.
I was becoming extremely nauseas and tried to throw up, but to no avail.So I attempted to force myself to be sick, still no luck.
Our guide, Emmanuel, had told me, should I throw up that it would make me feel much better, but it never happened as I was not able to.
I was now on the stage where I had to stop every 2-3 minutes to catch my breath and I was feeling dizzy.I then remembered that there were still 2 staff members about 30 minutes behind me, I thought I would rest for a while until they reached me and then I would join them.I decided to call my girlfriend (Karen) who was in front of me.
Soon after I called her name, I passed out.
When I came around all I could see was all these bright lights from the headlamps and couldn’t remember where I was or how I got there. Then there was this thing over my mouth and it scared the living daylights out of me, it was the oxygen mask. I was told that I tried to get up and start walking but was forced to the ground. My girlfriend told me that I had stopped breathing and as they [guides] were struggling to put the oxygen on, had to do mouth to mouth to help me breathe. They wanted to put me into a compression bag to help adjust to the altitude but couldn’t get the oxygen to work, but eventually they managed to do so.
It was decided to get me off the mountain as quickly and as soon as possible, as by this stage I was going in and out of consciousness.
I don’t remember anything on the descent, only waking up on the stretcher in the rain forest and the raindrops falling on my face. I was taken back to the hotel and waited there for the doctor.
I am extremely grateful and thankful to the two guides who had assisted me. They were extremely professional in the descent and I highly respect them.
They were very considerate but can you imagine physically carrying an 89kg unconscious man down about 3000m on a stretcher.
Raymond and Emmanuel I salute you two! NOT TO FORGET, the porters that assisted you.
I will never forget this experience, EVER!
I am definitely going back to finish what I’ve started.
Thank you
Quinton
Kilimanjaro 2006