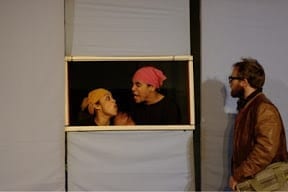 The visit to the festival was a first for both my wife and I…we had been several years ago, but that was only a flying visit.This was a “proper” visit with the productions we wanted to see planned with military precision.
We arrived at 10.30,picked up tickets for all our productions(12 over the course of three days) and headed off to the first on our list. 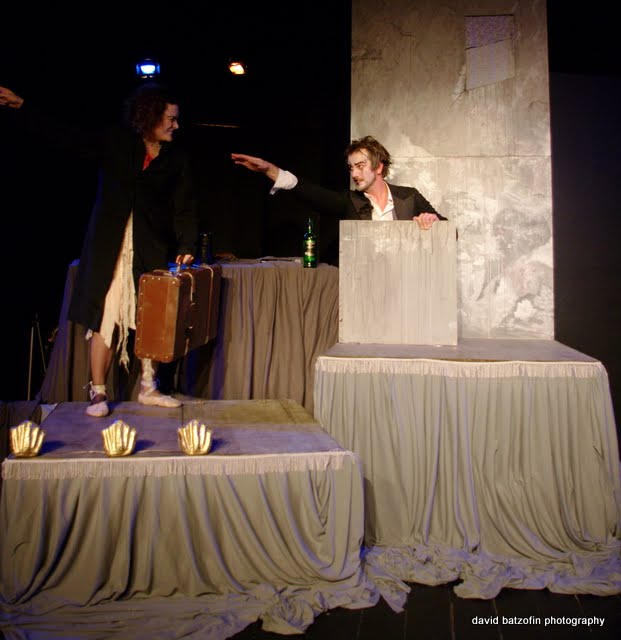 Kardiavale…presented by Conspiracy of Clowns.Featuring Rob Murray and Liezl de Kock, this dark tale of a freak show owner in search of a new ‘freak’ was certainly the talk of the festival

Next on the list was the very talented Dale Ambler…in his first solo show called “You sit, I’ll stand”

Although the audience at the performance we attended was very small,it was,however, very enthusiastic.Dale’s material comes from his own experiences making it that much more personal…and very funny. Even his Julius Malema jokes got hoots of laughter from, what later turned out to be,a group from the ANCYL! Certainly a talent to watch

Next up was the somewhat confusing “The Feather Collector”. Billed as a tale of reinvention based on Ovid’s “Narcissus and Echo”, it tried to be too many styles at once, leaving both my wife and I confused and bewildered.

The author did say in his program notes that it was a work in progress,and perhaps it will be trimmed so that it becomes a more cohesive production.

Our final show on day one blew us away.”Miskien” written and directed by Tara Louise Notcutt is simply brilliant! A worthy winner of the Silver Standard Bank Ovation award in 2010, this is a must see production!

Both performers switch so seamlessly from English to Afrikaans that it is almost impossible to tell which is their home language.

The show might offend some because of the language used, but ‘those’ words are not used merely for effect…the production is a carefully crafted look at the relationship between two friends and is highly recommended if it ever comes to a theatre near you!

We ended off the day with a great Bunny Chow at a local Indian restaurant and then made our way back to our wonderful B ‘n B, 11 Worcester on Durban for a good nights sleep as another busy day awaits us tomorrow!

Day Two of our stay started off with a stroll around the various outdoor stalls,mostly selling beadwork and craft made by people from North of our borders…these beaded flowers were VERY popular!

This beaded skeleton might not have been first on a shopping list, but it certainly attracted a lot of attention.

Our first production of the day,”Death of a Colonialist” features the multi talented Jamison Bartlett in the lead role.

Because of tight timing, we had to rush across town to make the performance of “Master of the Cafe society” in time…it transpired that they had a problem with their lighting board and as a result, started 15mins late!

Written by Steven Berkhoff and performed by a cast from Durban,this very wordy play was a look at the relationship between a clothes salesman who believes that he is a great actor and the woman that works in the cafe where he eats breakfast every morning.

Our penultimate show of the day also turned out to be the penultimate performance of “Dekaf” and what a brilliant stand-up comedian Siv Ngesi is!

He played to a packed venue and had the audience eating out of his hand from the moment he stepped on stage.
No-one his safe from his wicked observational style of comedy…and when new material worked, he seemed to enjoy the gag as much as the audience did!

He has been doing this show for the last three years and he says that it is time to move on…a very funny young man and I would recommend seeing him,even if he is just reading the phone book on a stage near you!

Our final production on day 2 was a festival perennial…”Rocket Raiders”,which seems to be a spin-off of the original “Raiders of the lost Ardvark” that has played at the festival for more years than anyone cares to remember…

With only two actors and several more gleaned from the audience members,the show rockets(pun intended) as it tells weaves a tale that has put smiles on 65000 festival attendees over the years.

If you are sitting in the front few rows, there is every possibility that you might become one of the “chosen” to make their stage debut in a performance!

Watching Nicholas Ellenbogen on stage did make me want to shout out “Give that man a Bells”…long may Raiders keep putting smiles on audience members.

One more day, 4 more shows, and then we bid Grahamstown a fond farewell and head off to our next destination before we return to Port Elizabeth and board a flight back to Johannesburg

Our last day started with “Butlers and Blackmail…an audience participation show that almost did not happen due to a power outage.

But in true theatre tradition, the show started with the doors open in order to allow natural light in…however ESKOM came to the party and the power was restored as the show started

Using only 4 cast members playing a variety of roles as well as some ingenious audience participation, the show was a hoot!

After a quick breakfast, our next show was the highly rated “Mafeking Road” featuring four of Herman Charles Bosman’s short stories. Wonderful performances and tight direction make for a very good production, however the dilution of “the Bekkersdal Marathon” by dividing in into four parts did not work for me.

Our penultimate performance of the festival was “The volunteer man” which was an import from Israel..

Dealing with imminent death and the prospect of assisted euthanasia, this might not be an easy production to watch, but it is well written and performed by an international cast.Roy Horowivitz,the volunteer, will be coming to Johannesburg with a production called “My first Sony” that was performed at the festival last year.

Our final production was a one man production entitled “Dirt”,featuring James Cairns. James plates three characters who are on a road trip to the funeral of a friend killed in a car accident.Aside from the three,there is a dog called Tom that features prominently throughout.

The use of a ladder and a variety of props to indicate the passage of time as well as their encounters along the way is novel and innovative.

There is a possibility that the production will go to both Cape Town and Johannesburg in the not too distant future.
And so ends our visit to the The National Arts Festival…12 productions in 3 days, great,if chilly, weather and a really great vibe will ensure that we will certainly return again next year!

All content and images are the intellectual property of david batzofin