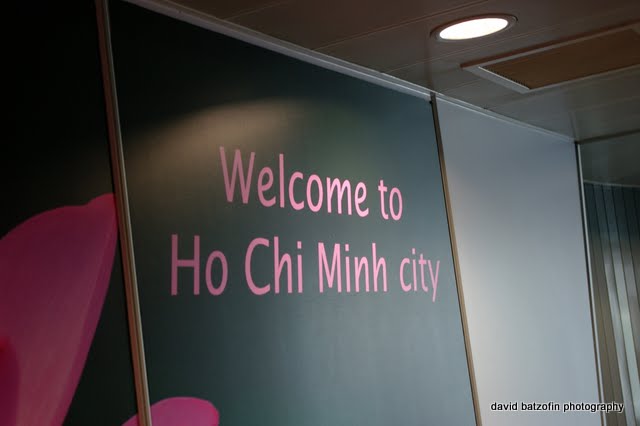 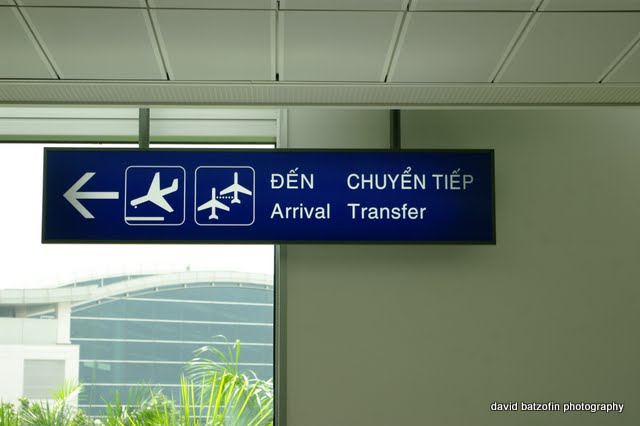 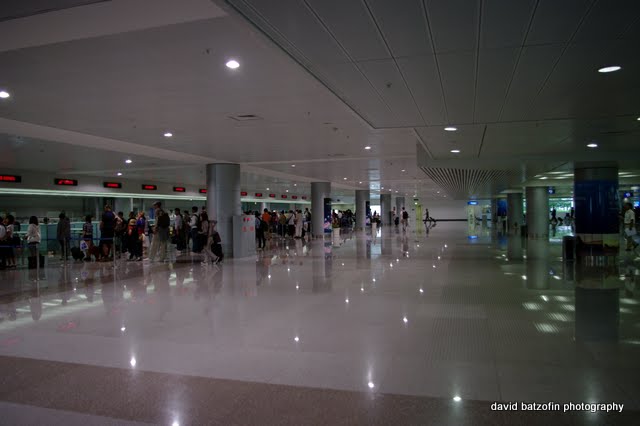 The airport is modern, clean and the officials were certainly very helpful…we were able to get our visas in less than 15 minutes…We recommend that you pick them up in Vietnam as they were about R200.00 less than the Embassy in Pretoria wanted…and we did not have to tackle that dreaded highway and the traffic.(Many thanks to our Vietnamese tour agent,more about that company later) 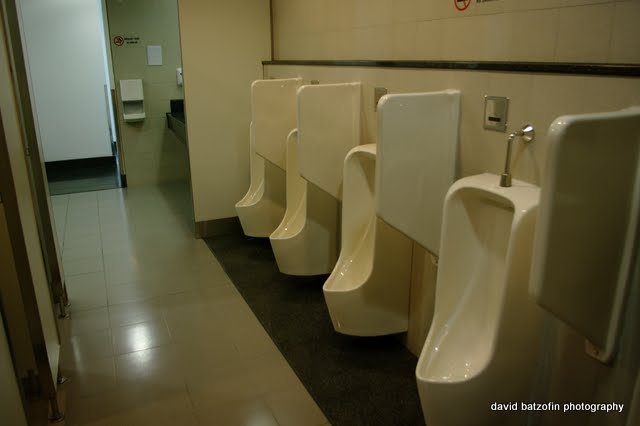 The gents urinals at the airport were certainly a very strange design! 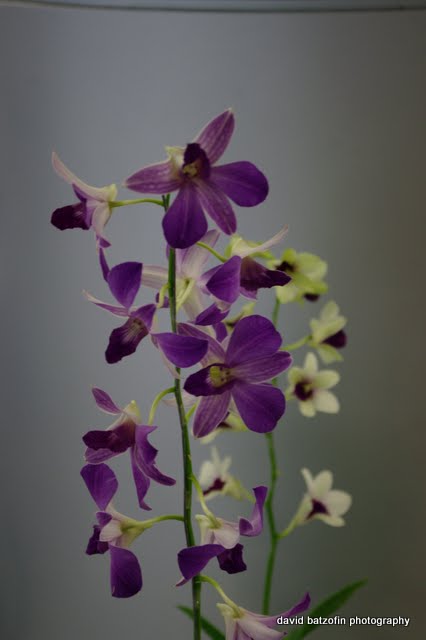 At first we were uncertain if these were real, they were! The flowers in Saigon are stunning as the climate seems to favour brightly coloured varieties. 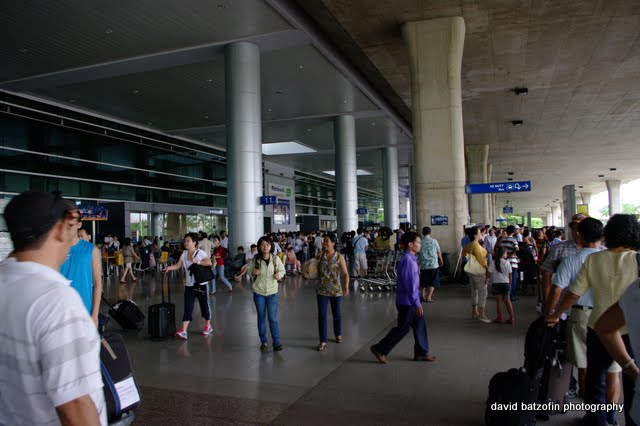 Walking out of the airport building was like walking into a blast furnace…the humidity hits you like a plank! However, unlike many other international airports we have been to, we we not accosted by vendors or people offering to carry our luggage… 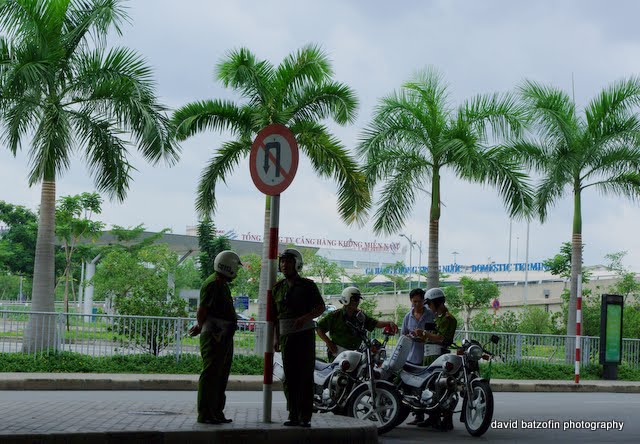 Our guide,Toan, was waiting for us as the vehicle was not allowed to park for any length of time.These traffic officials were ready to pounce at a moments notice. 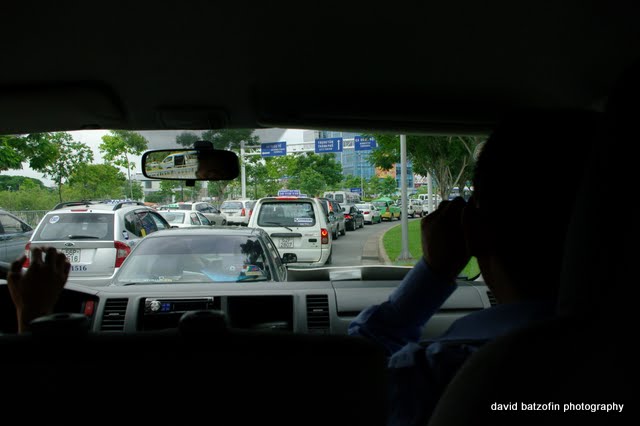 Although we arrived on a Sunday, the traffic was chaotic…but none of the drivers seemed to be stressed by this fact.It turns out that the drivers are quite a polite lots and despite the density of the traffic we saw no “road rage”…perhaps something we could learn in SA! 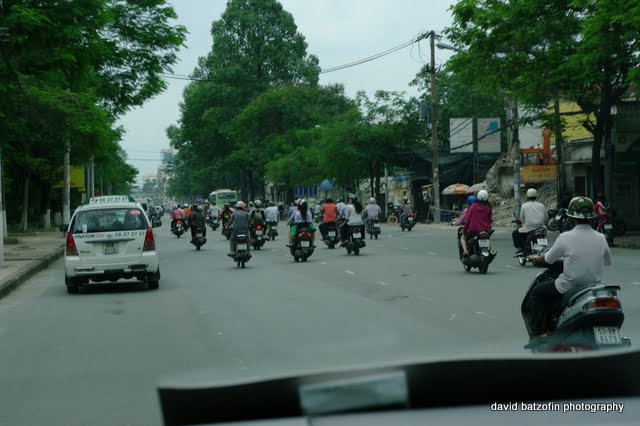 Something else I had to get used to was the number of scooters that abound in this city.Our guide told us that originally the main mode of transport used to be bicycles, but as the city grew they have been replaced by scooters of all shapes and colours.Size wise they seem to be similar(around 125cc) 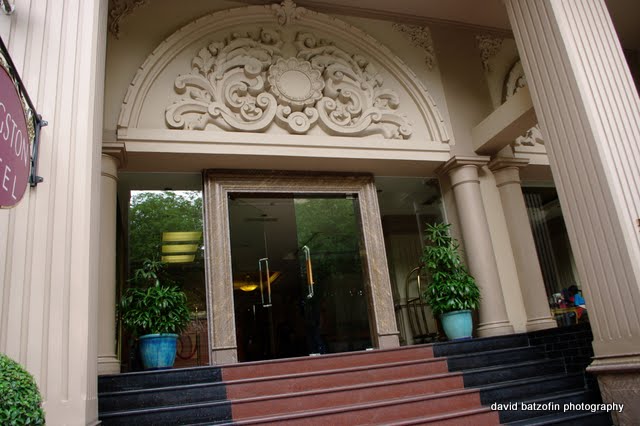 During our visit to Saigon we stayed at the Kingston Hotel…a great hotel and within walking distance of the local market, a must visit destination! 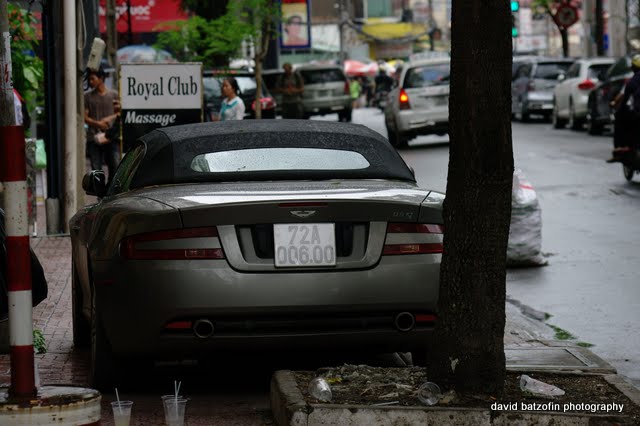 I was hoping that this Aston Martin DB9 was going to be our transport, but turns out that it belongs to the owner of the hotel…pity! 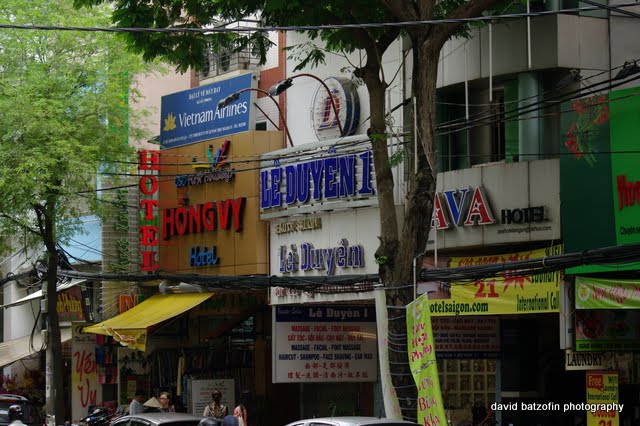 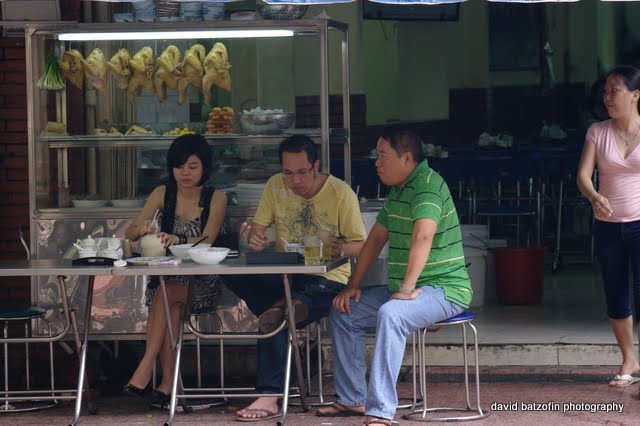 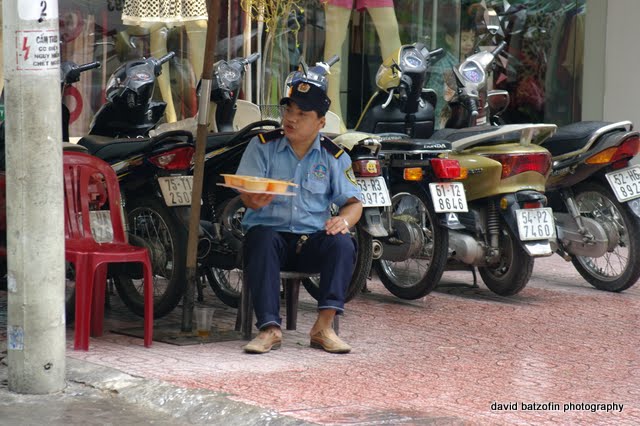 Some images taken from the steps of the hotel…the people here do not seem to mind having their photograph taken,in fact they often seemed to want me to take their picture. 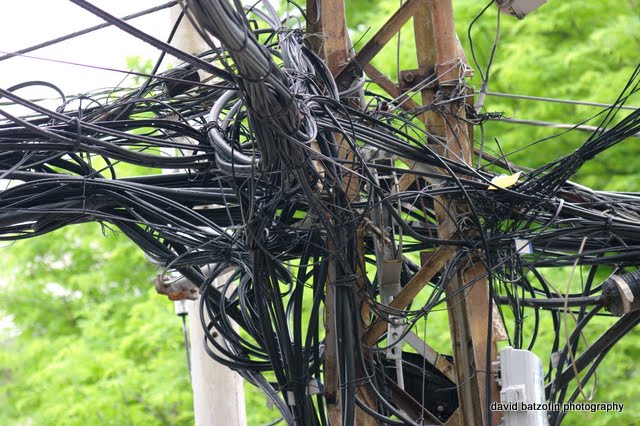 I though that this ‘mess’ was electrical, but it turns out that they are communication cables.Although I did see workmen busy with repairs, how they know which cable goes where is beyond me. 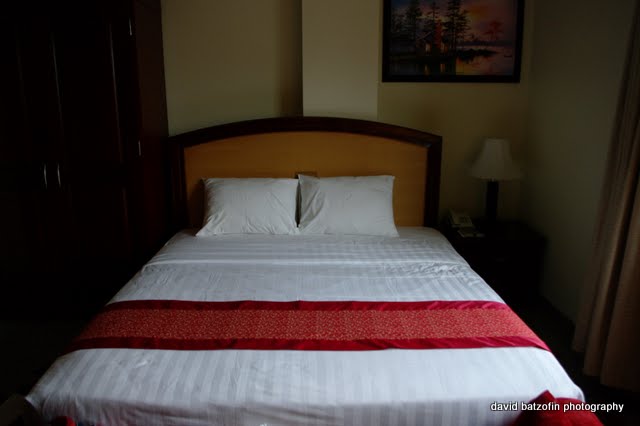 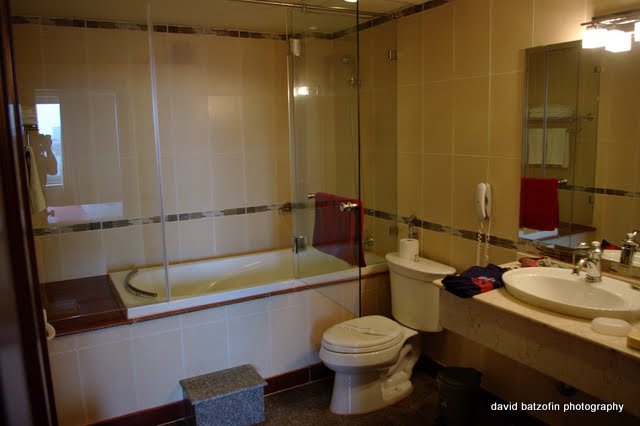 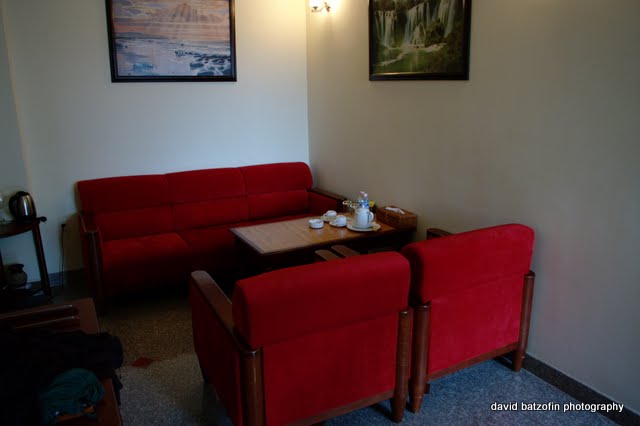 Our room at the Kingston was on the Executive floor and not only was it comfortable, it had the best pillows I have had in years! 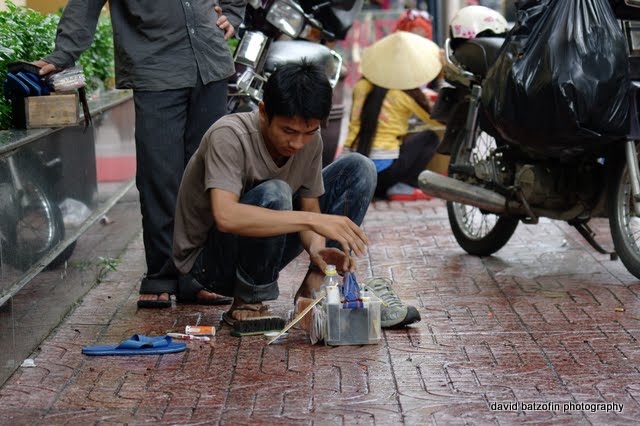 This fellow fixed my running shoes for $1.00 and he did it in the street.With shoes patched and cleaned I was ready to see what this town had to offer… 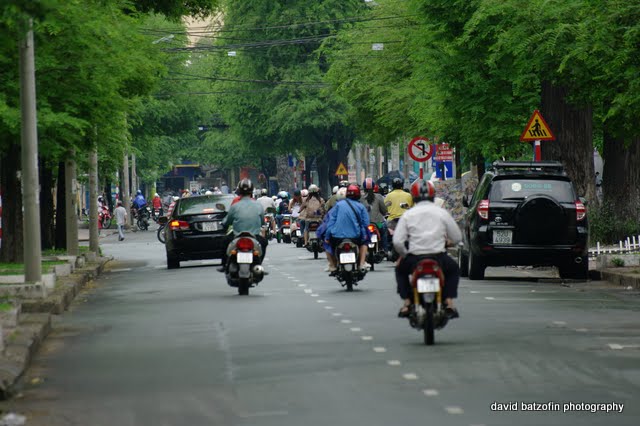 We were serenaded to sleep by the sounds of scooter hooters that seem to go on 24 hours a day.
After a wait of 10 years, I am excited to be here…and to see what tomorrow has to offer…
To find out more about the Kingston Hotel, visit www.kingstonhotel.com.vn