It all started very innocently, just like any other habit… “Have you seen the Red Setter that Bob just bought?
“Great dogs, I said”
“ Not a dog, a fly!”
“A fly,” I asked in all innocence? “I did not know that there was such a species”
“A fishing fly!” said my friend in an exasperated voice.
I am your normal every day business man, I play golf with friends once, perhaps twice a week but that was the extent of my sporting activity.
I bought clubs and irons when I needed them, but I have to admit that my biggest expense was probably golf balls…you might gather that I am not the worlds greatest golfer…but I digress.
There was a fly fishing trip planned for the weekend and I had been invited to go along.
I had no idea of what to take or what I could expect, but being an inquisitive person I thought that it might be an adventure.
Words and phrases that I had never heard before were being bandied about while we were packing
“Don’t forget the Black Woolly Bugger” and “Has anyone seen MY Plewmans Killer?” I thought the latter might have been a movie I had missed.
All was to going to be revealed to me during the course of the weekend.
I have been on several motivational training courses but nothing had prepared me for what would be a life-changing weekend. [Picture the movie “A river runs through it”, set in Africa but without Robert Redford!
Fly-fishing is not so much a sport as almost a spiritual experience.
A quiet gently flowing section of the river was deemed suitable and I was introduced to the equipment that would be required for bringing dinner to the table that night.
Black Woolly Buggers and Plewmans Killers are two types of flies that could be used to catch trout .The type of fly depends on the natural food selection found on a particular stretch of river.
Casting is an art that I was told can be taught in a morning but will take a lifetime to perfect. It looks a lot easier than it actually is…just ask Cyril Ramaposa!
Once all the flies had been chosen and tied to lines it was time to find our own “spot” to fish.
Unlike many other masculine sports that are testosterone filled and aggressive, fly-fishing is quiet and introspective,
Standing in hip-waders in the middle of a flowing river might sound daft, but it is a great time to be “with yourself”
The hiss of the line as it snakes through the air. The gentle plop as the fly lands on the water and the click of the ratchet as you wind it back in ready for the next cast creates a feeling of peace and harmony that cannot be beaten.
The casting almost takes on a life of it’s own…cast, reel in. Cast and reel in. Repetition makes this task no easier.
Hope however is what kept me going. Hope that the trout lurking in the river will be fooled into believing that my fly is actually food.
However catching that illusive trout almost becomes secondary to the rhythm and almost hypnotic effect of the cast.
Hours go by like minutes with very little human sound to break the spell. It is as if you have become one with your surrounding and with nature.
You marvel at a kingfisher diving into the water to catch its dinner. You don’t even begrudge the fact that it can catch in one swoop what you have been trying all morning to do.
Then comes ‘THE CAST’…everything is just right…the fly lands silently in a patch of shady water under a large willow…I started to reel in slowly focusing on the point where my line entered the water.
All of a sudden I felt a tug on my line, almost imperceptibly the line started moving away from me.
I was so transfixed by this that I almost forgot to “set the hook”. A sharp pull upward on the rod and the fight was on!
The water boiled as the trout tried to get away, but with the encouragement of my friends, I was able to reel it in.
A net was produced and the fish was scooped out of the water for all to admire.
It was at this point that the “priest” was produced. This is a special club designed for killing trout.
As I took it in my hand I looked at this beautiful fish lying quietly in the net, I raised the “priest” and then lowered it …we would be having boerewors that night.
I released the trout gently back into the water and as I watched it swim away I knew that I would be back to try to catch it again.
That first time took place many years ago. Since then I have fished many rivers in many parts of the world. Sometimes with strangers, sometimes with special friends, but always with a sense of wonder at what nature can provide. 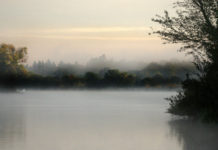 A year on, what has really changed? My COVID-19 anniversary update.

Am I sleeping at the office or working from home? My COVID-19 update.

Clinging to the wreckage…

We become travelers in our own city with a visit to...

An outing with Safari Blue. Fumba,Zanzibar

An Elephant never forgets…we revisit the Elephant Sanctuary near Brits

Airlink from ORT to Maun

Kigali to Kivu and back.Rwanda for a weekend

Another Wednesday? Already? My COVID-19 update.

We bid farewell to the island. Our flight home.